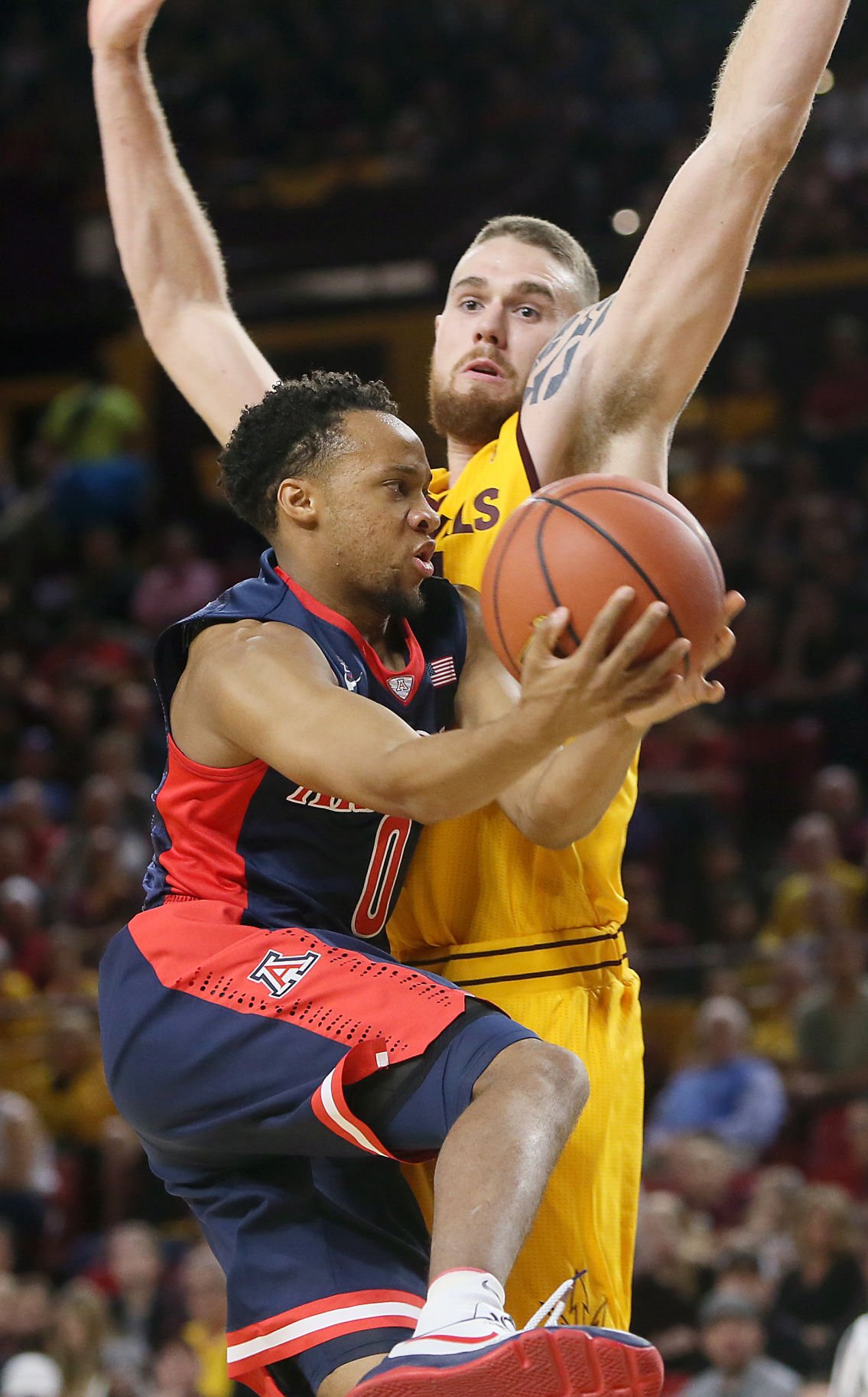 TEMPE – Arizona shot 55.6 percent from the field and outrebounded ASU to beat the Sun Devils 94-82 today for the first time at Wells Fargo Arena in three seasons.

The Wildcats were playing for the first time since Nov. 26 with center Kaleb Tarczewski, who had eight points and five rebounds. Tarczewski had been recovering from a stress reaction and strained muscle in his left foot suffered against Santa Clara. He came off the bench after Dusan Ristic started at center.

Arizona led by up to 16 points in the second half but ASU cut it within eight points, to 78-70 with 3:21 left when Tra Holder drove inside. But the Sun Devils never came closer than six points the rest of the way, while ASU coach Bobby Hurley was called for two technicals in the final minutes, resulting in his ejection with 59.6 seconds left.

The Wildcats were nearly as heated as Hurley earlier in the seconde half. Tarczewski was whistled for a technical foul while he argued a call from under the UA basket, allowing ASU to creep within 48-43 on two free throws, while UA coach Sean Miller took his jacket off in apparent displeasure that a foul was not called when Kadeem Allen drove inside for a basket.

Arizona later expanded its lead into double digits thanks to the hot three-point shooting of York, who hit three of them within a span of 3:35 midway through the half. York stepped back to about 24 feet for his second shot and then rolled off a screen for his third, making it 66-53 with 8:08 left.

Trier led the Wildcats in scoring with 10 points, while UA had seven from Tarczewski.

The Wildcats shot 59.3 percent from the field, primarly by pounding the ball inside, though Gabe York and Mark Tollefsen each added three-pointers. ASU shot 43.8 percent and cooled to 5-of-14 three-point shooting after hitting four in the first eight minutes.

Arizona’s 18-2 run started with 14 straight points that erased a 28-19 deficit. Kadeem Allen began the run immediately after a UA timeout, cutting it to 28-21, while Tarczewski drew fouls on two attempts around the basket: He made a three-point play on one and hit two free throws on another.

Arizona had success early inside, building a 12-8 lead less than five minutes into the game with two inside shots from Dusan Ristic and two drives from Allonzo Trier.

But ASU took a 21-17 lead after eight minutes by hitting 4 of 7 three-pointers and, after Gerry Blakes made an unguarded rebound basket to give ASU a 28-19 edge, UA coach Sean Miller called a timeout to regroup. The game changed dramatically after the timeout.

The game opened the Pac-12 season for the Wildcats and Sun Devils, and will both travel to Los Angeles to continue conference play this week. UA will face UCLA on Thursday and USC on Saturday.

Get a recap of news from Arizona's win over ASU.

Seen and heard at Wells Fargo Arena during Arizona's game against ASU.