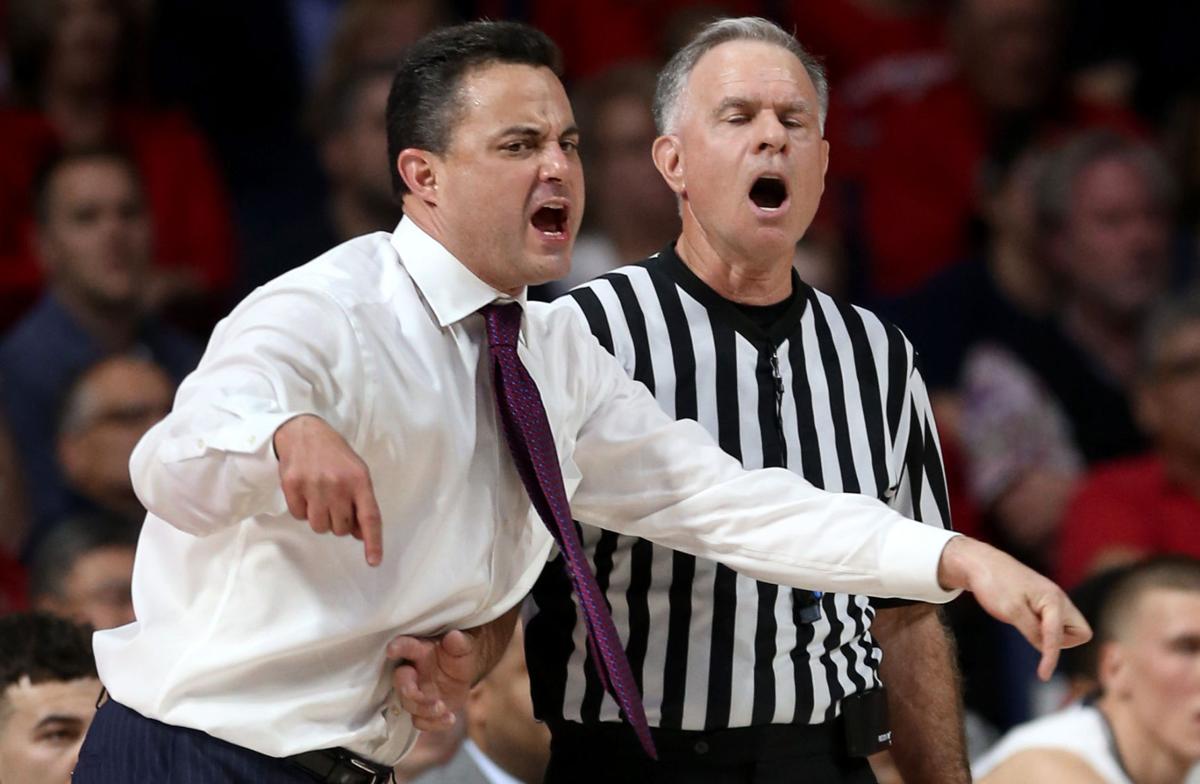 Arizona head coach Sean Miller is held back by game official Dick Cartmell while voicing his displeasure on a call against his Wildcats in the first half against UCLA in their Pac-12 game at McKale Center, Friday, Feb. 12, 2016, Tucson, Ariz. Kelly Presnell / Arizona Daily Star

Unable to defend and sputtering offensively in the first half, Arizona found its rhythm on both ends of the court just in time for a 81-75 win over UCLA at McKale Center tonight.

Arizona trailed 44-34 at halftime and by up to 11 early in the second half before clamping down defensively, getting a balanced offensive attack and taking advantage of UCLA's significant foul trouble.

The Bruins had 31 fouls called against them, allowing the Wildcats to take 29 more free throws, and UCLA centers Thomas Welsh and Tony Parker both fouled out with about six minutes to go.

UCLA, which shot just 38.7 percent after shooting 53.1 percent in the first half, was led by Isaac Hamilton, who had 24 points.

The win moved Arizona to 20-5 overall and 8-4 in the Pac-12, with a chance to avenge the other half of its two losses in Los Angeles last month Sunday against USC.

The Wildcats didn’t take a lead until Ryan Anderson rebounded Gabe York’s missed free throw and put it back with 7:30 to go and the game remained within one possession until Parker Jackson-Cartwright hit a three-pointer in a set offense with 2:31 remaining.

Gabe York later drove in for a layup and drew a foul, hitting the and-one free throw to give UA a 78-70 lead with 54.3 seconds left. York’s three-point play capped a 9-0 run that pretty much put the game away.

The Wildcats trailed by up to 11 points early in the second half but went on an 8-2 run while holding the Bruins to just 1 of 6 shots, cutting UCLA’s lead to just four points. They later crept within three, 53-50, when Allonzo Trier hit a three-pointer from the top of the key and the game stayed close from there.

For Trier, it was a new beginning of sorts. He was 0-for-6 from the field in the first half while wearing his protective hand wrap over his right hand, which was broken on Jan. 9 at USC. But he took off the wrap at halftime and returned to hit his first three shots. He scored 15 points in the second half on 4-for-7 shooting from the field while also hitting all six free throws he took.

Meanwhile, Arizona also shot just 29.6 percent in the first half and made just eight field goals with just three assists. The Wildcats stayed somewhat in the game by hitting 15 of 21 free throws.

Starting in place of Kadeem Allen, who had been sick this week, Jackson-Cartwright led the Wildcats in scoring with 11 points. But Arizona was outshot and outrebounded 18-17 by the Bruins in the first half, before it outrebounded UCLA 42-34 overall.

UCLA went on a 10-2 lead midway through the first half to take a 29-19 lead with 7:16 left, having been hurt the most during the run when Prince Ali hit a three-pointer off a UCLA offensive rebound. The Bruins also had a layup from Tony Parker and a 15-footer from Hamilton, beating the Wildcats off the dribble often as they did in Los Angeles last month.

The Wildcats went on an 0-for-6 stretch from the field during the run, breaking it up only with free throws.

Jackson-Cartwright made the most of his start early. He scored eight points through the first media timeout, when UCLA led 12-11.

Arizona gave up two quick scores to Hamilton early, one a layup and another a 15-footer, then had turnovers turn into Bruin baskets on two possessions.

The Wildcats were playing without backup center Chance Comanche, who suffered a concussion in practice on Monday. Comanche has played in 16 games this season but not against the Bruins last month.

Get a recap of news from Arizona's win over UCLA.

Arizona mounts a comeback to take down UCLA.

Seen and heard at McKale Center during Arizona's win over UCLA.

Arizona head coach Sean Miller is held back by game official Dick Cartmell while voicing his displeasure on a call against his Wildcats in the first half against UCLA in their Pac-12 game at McKale Center, Friday, Feb. 12, 2016, Tucson, Ariz. Kelly Presnell / Arizona Daily Star