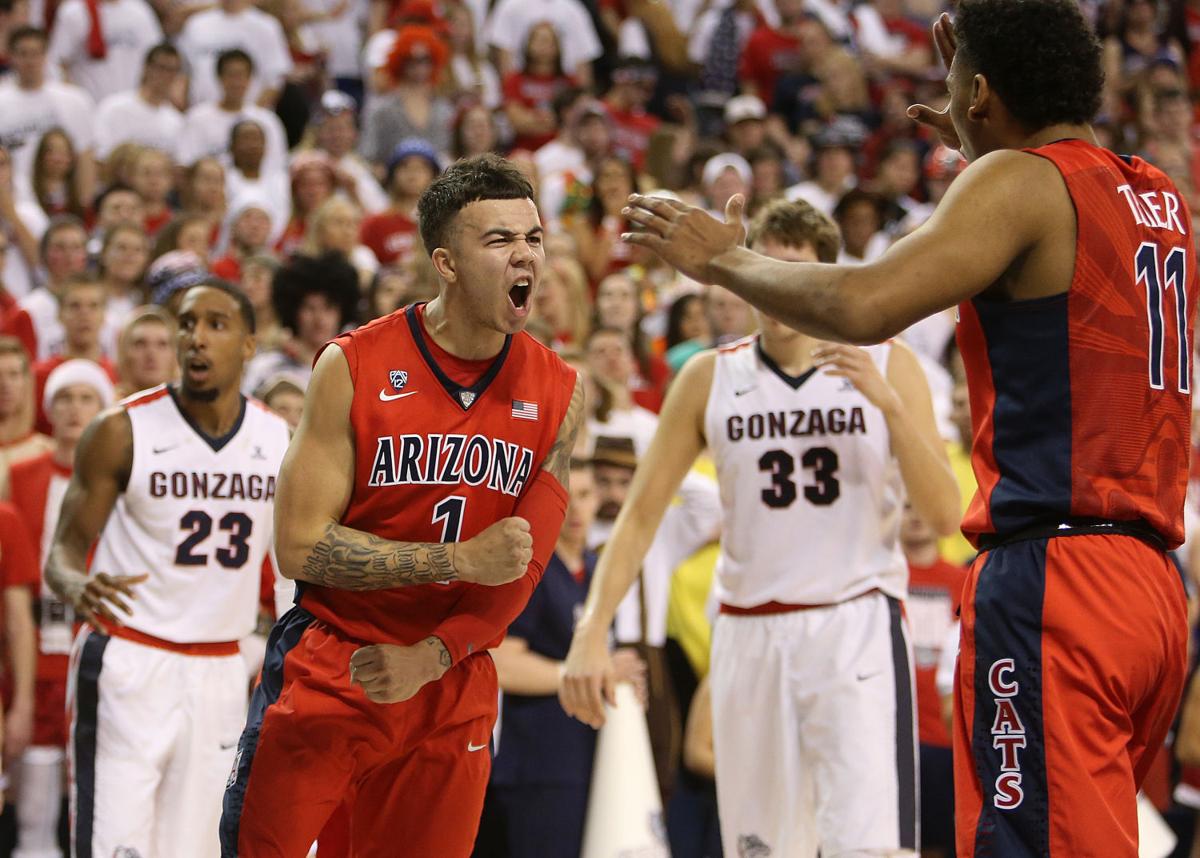 Arizona Wildcats guard Gabe York (1) lets out a roar after the Arizona Wildcats forced a five-second violation during a Gonzaga inbounds attempt in the second half of the No. 19 Arizona Wildcats vs. No. 13 Gonzaga Bulldogs men's NCAA college basketball game at McCarthey Athletic Center in Spokane, Wash., Saturday, Dec. 5, 2015. Arizona used a second-half comeback to win 68-63. Mike Christy / Arizona Daily Star 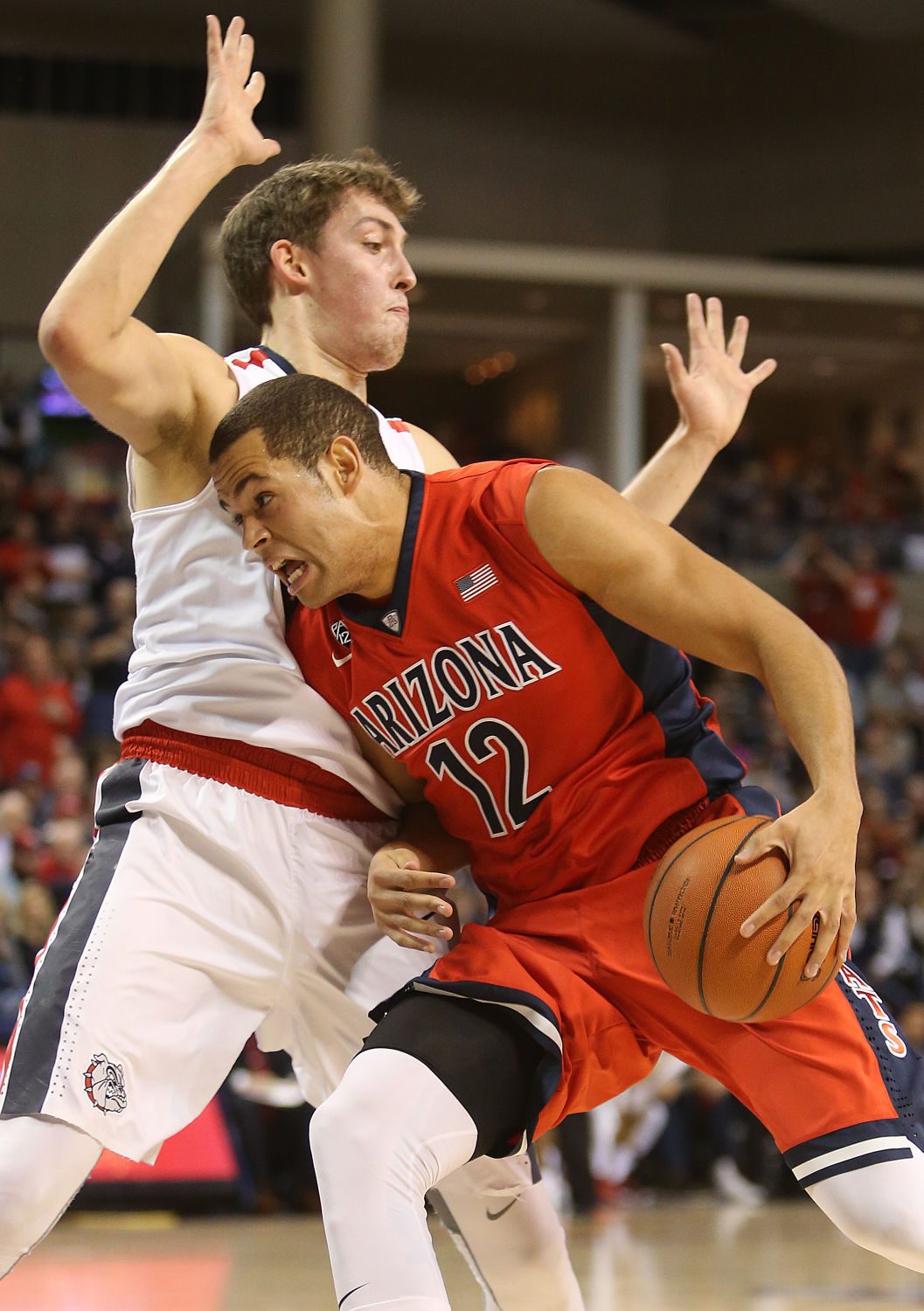 SPOKANE, Wash. – Gabe York had 18 points while Arizona clamped down defensively to overcome a 10-point halftime deficit and beat No. 13 Gonzaga 68-63 in a Top 25 showdown today at McCarthey Athletic Center.

Down 38-28 at halftime, Arizona received four early three-pointers from York after halftime and held Gonzaga scoreless for over four minutes late in the game to pull off the comeback victory. GU shot just 33.3 percent in the second half, nearly matching UA's poor shooting in the first half.

Arizona's win gave them a sweep in the two-year home-and-home series after the Wildcats beat the Zags 66-63 last season in overtime at McKale Center.UA improved to 7-1 overall this season while Gonzaga dropped to 5-2.

The Wildcats overcame a 33-point performance from Gonzaga’s Kyle Wiltjer while Domantas Sabonis also had 18 points for the Zags.

The Zags looked early in the second half like they might be able to blow the game open, with Wiltjer hitting an 18-footer and a three-pointer off screens but the Wildcats quickly pulled it together as York heated up.

York helped Arizona cut a 38-28 halftime deficit to just 45-40, scoring eight points in less than two minutes, including a pair of three-pointers from the right wing. Then Anderson went inside to score, drawing a foul from Sabonis, and the Wildcats pulled within 45-42.

The Wildcats took their first lead of the second half with 8:21 left, 57-56, and eventually went ahead by five at the end while their defense kept the Zags quiet.

In the first half, Wiltjer scored 20 points on 8-for-12 shooting while the Bulldogs held Arizona to just 32.3-percent shooting to take a 38-28 halftime lead.

Even though both teams were missing their starting centers – Kaleb Tarczewski (foot) for Arizona and Przemek Karnowski (back) for Gonzaga – the first-half action mostly went inside.

The Wildcats tried to match the Zags’ still-formidable frontcourt with Dusan Ristic and Chance Comanche, and found some early success going to Ristic, but the Zags interior defense helped them pull away in the second part of the first half.

Arizona had cut Gonzaga’s lead to 18-15 midway through the first half when the Zags dramatically changed the momentum. They blocked shots on two straight UA possessions that led to baskets on the other end, and it was quickly 22-15.

On one possession, Sabonis blocked York as he tried to drive in for a layup, and on the next, Wiltjer swatted it from Anderson’s hands about 10 feet away from the basket.

Wiltjer was unstoppable offensively for the Zags early, with a pair of three pointers and two inside baskets to score 10 points through the first seven minutes, after which Gonzaga took a 14-8 lead.

While Wiltjer finished with 20 points in the first half, Sabonis added 12 for Gonzaga. Trier had eight points to lead the Wildcats offensively, scoring six of them in the final 1:23 after UA had gone on a 2-for-14 skid from the field.

Arizona shot under 30 percent as a team until Trier picked the Wildcats up at the end. UA made just 1 of 7 three-pointers.

Without Tarczewski, who watched the game along with fellow injured teammate Ray Smith (ACL tear), the Wildcats started Ristic and played Comanche off the bench at center. Trier also received his third start, playing small forward instead of Mark Tollefsen.

Get a recap of news from Arizona's win over Gonzaga.

Wildcats come back to upset Bulldogs.

Arizona Wildcats guard Gabe York (1) lets out a roar after the Arizona Wildcats forced a five-second violation during a Gonzaga inbounds attempt in the second half of the No. 19 Arizona Wildcats vs. No. 13 Gonzaga Bulldogs men's NCAA college basketball game at McCarthey Athletic Center in Spokane, Wash., Saturday, Dec. 5, 2015. Arizona used a second-half comeback to win 68-63. Mike Christy / Arizona Daily Star