Arizona crushed ASU inside and held the Sun Devils to 32.3-percent shooting in a 99-61 romp at McKale Center tonight.

The win moved Arizona to 22-5 overall and 10-4 in the Pac-12, where the Wildcats remain in a loss-column tie for first place with Oregon (9-4), which will face Oregon State on Saturday in Eugene.

The Wildcats will have a week to prepare for their final road trip of the regular season, next playing at Colorado on Feb. 24 and then Utah on Feb. 27.

Allonzo Trier led the Wildcats with 20 points and eight rebounds in the first game he has reached 20 since breaking his right hand at USC on Jan. 9. Ryan Anderson added 15 points and six rebounds while Kaleb Tarczewski had six points and 14 rebounds.

Dusan Ristic added another 16 points off the bench while the Wildcats scored 48 points in the paint and outrebounded undersized ASU 50-26.

In all, UA scored more than half (52) of its points in the paint, while collecting 18 second-chance points off 14 offensive rebounds.

From there, the game was no contest, with the only suspense being whether the UA would crack the century mark for the first time in regulation this season. UA’s previous high scoring game in regulation was a 99-67 win over Washington at McKale Center on Jan. 14; the Wildcats scored 101 at USC but that was in a four-overtime loss.

UA took a 30-point lead, 65-35, midway through the second half when Kadeem Allen scored the second of three baskets within a span of 1:12. Those three baskets totaled seven points, more than he scored in any of UA’s previous four games while battling illnesses.

In the first half, Arizona dominated inside and held ASU to just 24.2-percent shooting while taking a 38-24 halftime lead over the Sun Devils tonight at McKale Center.

Trier had 11 points and Gabe York had nine to lead Arizona, which allowed ASU to wipe away an early 11-point lead, then went on a 13-1 run toward the end of the half to regain a double-digit lead.

The Wildcats shot 45.5 percent from the field and scored 24 of their 38 points in the paint. That, and UA's 27-17 rebounding advantage, allowed the Wildcats to overcome their 2-for-10 three-point shooting.

The Wildcats kept the Sun Devils scoreless for the first 4:23 of the game, leading 8-2 when ASU finally received a layup by Gerry Blakes. The Wildcats went on to lead by up to 11, 15-4 with 12:32 left, while initially outrebounding the Sun Devils 12-2.

But ASU went on a 13-2 run to take a brief 20-19 lead, tying the game at 17 on a three-pointer by Obinna Oleka and going ahead 20-19 on a three from Blakes. At the same time, the Wildcats hit only one of their previous eight field goals.

The Sun Devils couldn’t keep the lead, however, making just one of seven shots while the Wildcats went ahead 26-22 on a three-pointer by Gabe York with 3:45 to go.

Get a recap of news from Arizona's blowout win over Arizona State.

Seen and heard at McKale Center during Arizona's blowout win over Arizona State. 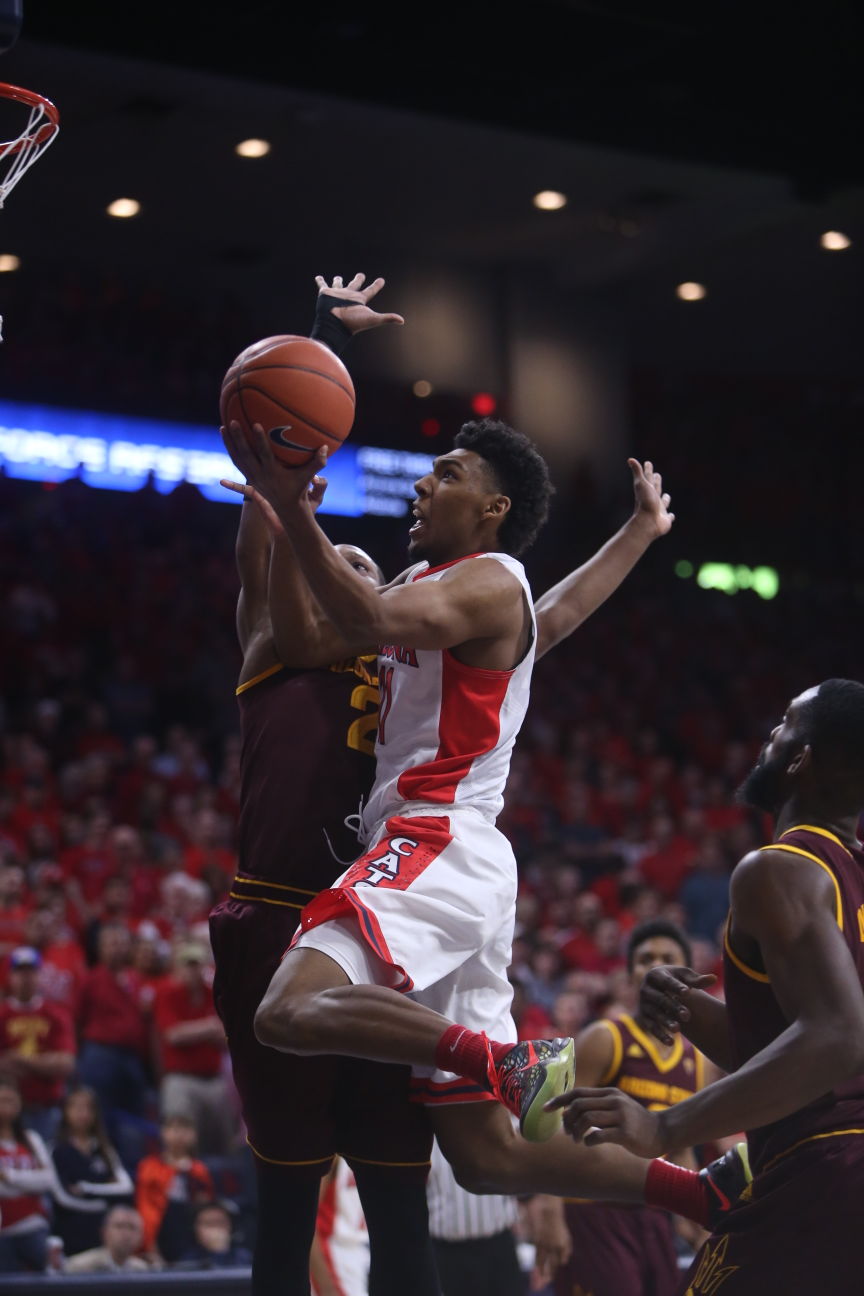 Arizona's Allonzo Trier (11) drives to the basket against ASU in the first half of their Pac-12 game at McKale Center, Wednesday, Feb. 17, 2016, Tucson, Ariz. Kelly Presnell / Arizona Daily Star