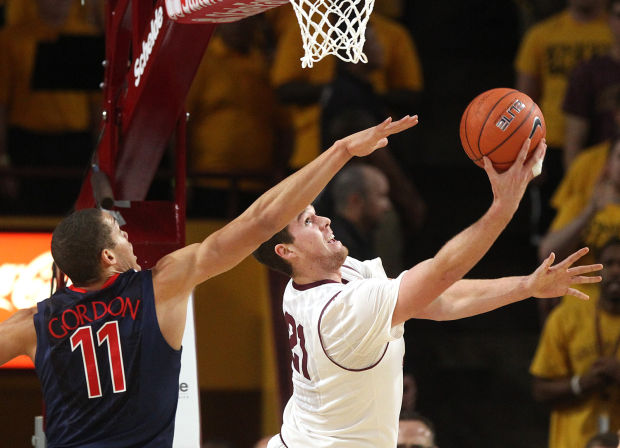 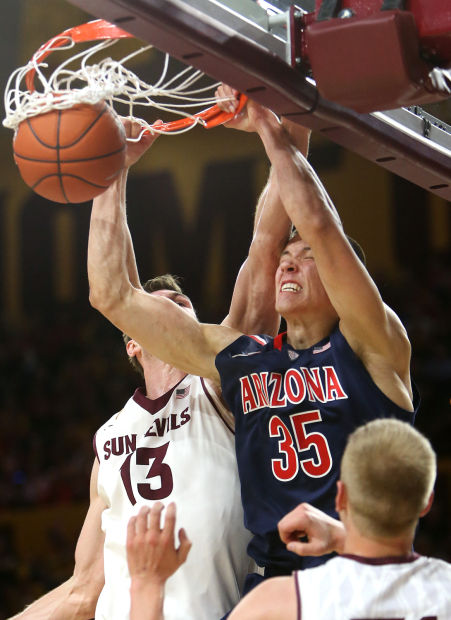 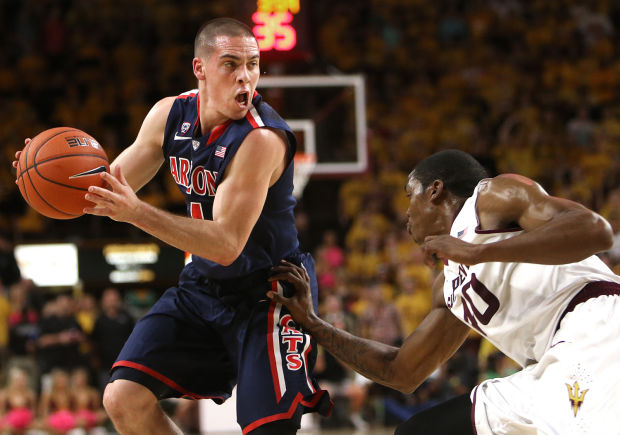 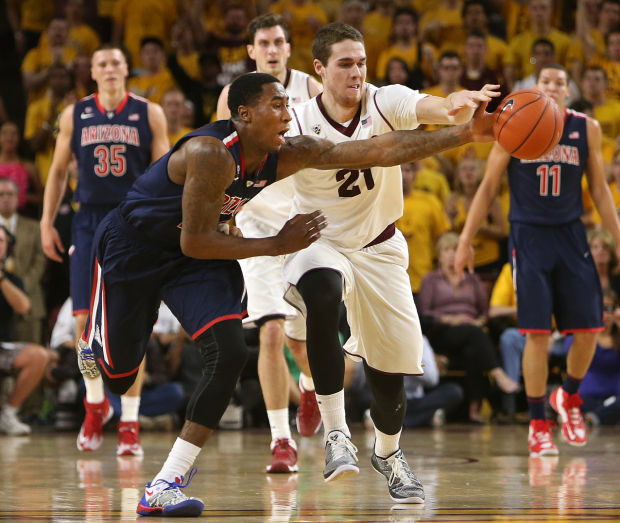 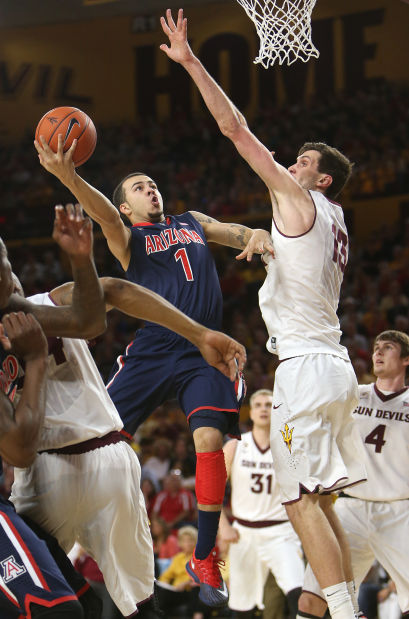 Arizona guard Gabe York (1) drives to put a shot up over Arizona State center Jordan Bachynski (13) during the first half of the No. 2 University of Arizona Wildcats vs. Arizona State Sun Devils men's college basketball game on Saturday, Feb. 14, 2014, at Wells Fargo Arena in Tempe, Ariz. Photo by Mike Christy / Arizona Daily Star 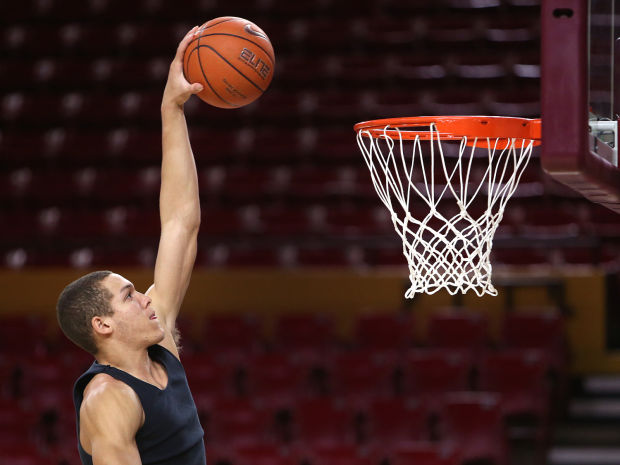 TEMPE – Defense and rebounding couldn’t save the Arizona Wildcats this time.

ASU's Jermaine Marshall drove inside for a go-ahead layup with 14.7 seconds left in double overtime and Jordan Bachynski blocked a shot from T.J. McConnell while ASU beat UA 69-66 tonight at Wells Fargo Arena.

Marshall’s layup over Nick Johnson gave ASU a 67-66 lead while, after Bachynski blocked McConnell, ASU guard Jahii Carson sprinted downcourt for an emphatic dunk. ASU fans then charged the court with 0.7 seconds left, forcing referees to usher them off the court, just as they had to at Cal when the Wildcats lost there on Feb. 1.

Nick Johnson threw up a final shot from near the halfcourt line but it bounced off the rim and fans again stormed the court. It was the first time ASU had ever beaten a team ranked as highly as No. 2.

The loss dropped Arizona to 23-2 overall and 10-2 in the Pac-12, entering a road swing to Utah and Colorado next week. ASU improved to 19-6 and 8-4 in the Pac-12, all but clinching an NCAA tournament berth, barring a late-season collapse. Marshall led ASU with 29 points while Jahii Carson had 17 points and four assists.

For UA, T.J. McConnell 17 and Nick Johnson had 14 points. Arizona held ASU to just 40 percent shooting from the field and outrebounded them 54-35, but those efforts didn't make up for their shaky offense.

ASU took a 59-57 lead early in the second overtime period on a layup from Carson but Carson’s subsequent efforts to hold on to the ball for much of ASU’s possessions did not pay off. Meanwhile, UA scored on a bank shot from T.J. McConnell and two inside scores from Aaron Gordon to go ahead 63-59 with 1:45 left.

But Jermaine Marshall hit two three-pointers for ASU over the next minute, tying the game at 65, before Aaron Gordon went to the line for UA and hit 1 of 2 free throws to put UA ahead 66-65.

The first overtime period was just as crazy as the regulation periods. Both Carson and Johnson each missed a pair of free throws midway through overtime and after the game went into the final minute tied at 57, Carson turned the ball over on an offensive charge.

But then McConnell threw a pass toward Rondae Hollis-Jefferson that was intercepted, giving ASU the ball with 51 seconds left. Then Carson drove inside but put up an errant layup, and it was UA’s turn to give it a shot with 22 seconds left before Nick Johnson missed a three and Hollis-Jefferson was too far behind the glass to pop his offensive rebound back.

ASU had a chance for a final heave with a second left, but Carson threw up a missed halfcourt shot and the game went into double overtime at 57-57.

In the second half of regulation, the Sun Devils held a 51-49 lead heading into the final minute but a turnover by ASU’s Shaquielle McKissic led to a transition layup from McConnell that tied it at 51 with 41 seconds left.

But Arizona couldn’t do any better. The Wildcats went to Aaron Gordon with five seconds left, and he missed a hook shot from eight feet out, and even though Rondae Hollis-Jefferson grabbed the rebound, Nick Johnson missed a shot at the buzzer, sending the game into overtime.

Carson missed six of his first seven jumpers, through the first 31 minutes of the game, but caught fire with six straight points to give ASU a 47-41 lead with 7:32 left and force a UA timeout.

Carson hit a jumper, two free throws and a fallaway layup during that stretch.

McConnell came back with a three-pointer to cut ASU’s lead to 47-44 but Carson kept rolling later with a free throw and 18-footer to give ASU a 50-46 lead with 4:40 left, and the Sun Devils carried that lead into the final three minutes.

ASU quickly erased a five-point halftime deficit, going ahead 29-28 with 17 minutes left after three-pointers from Shaquielle McKissic and Jermaine Marshall. But UA came back later to take a 35-31 lead with a three-pointer from McConnell and a fast-break dunk from Johnson off a rebound and assist from Hollis-Jefferson

At halftime, Arizona took a 26-21 halftime lead after a grind-it-out, defensive-oriented first half.

The Wildcats were led by Johnson, who had nine points and five rebounds, while Marshall led ASU with 12 points. Marshall did not play in UA’s 91-68 win over ASU last month.

The Wildcats shot just 36.7 percent but held ASU to 29.6-percent shooting and outrebounded the Sun Devils 26-15. ASU had just three offensive rebounds, and only one second-chance point off of them.

Carson made just 1 of 6 shots in the first half and had two turnovers to his two assists.

Arizona built a 20-14 lead the by time Kaleb Tarczewski scored with 4:23 left in the first half. The Wildcats had taken a 16-14 lead with 4:52 left when Johnson hit his first three pointer in the last 14 tries.

Arizona missed 10 of its first 12 shots, leading to an early ASU lead of 6-5, but the Wildcats stuck with the Sun Devils throughout the first half with defense and rebounding.

The Wildcats and Sun Devils were mired in a foul-plagued game early when neither team had much of an offensive rhythm.

Through the first 13 minutes of the half, Arizona allowed ASU to have just one offensive rebound, and outrebounded them 17-8 overall.

The Wildcats trailed 12-9 after a three-pointer from ASU’s Bo Barnes with nine minutes left but went ahead 13-12 with a dunk and layup from Kaleb Tarczewski.

We asked you, the reader (1,149 of you, to be precise, completed our online survey), and columnist Greg Hansen to give us a definitive list on…

Arizona guard Gabe York (1) drives to put a shot up over Arizona State center Jordan Bachynski (13) during the first half of the No. 2 University of Arizona Wildcats vs. Arizona State Sun Devils men's college basketball game on Saturday, Feb. 14, 2014, at Wells Fargo Arena in Tempe, Ariz. Photo by Mike Christy / Arizona Daily Star