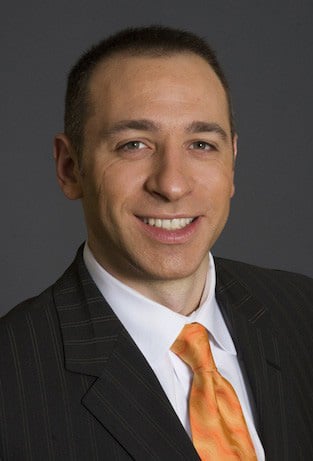 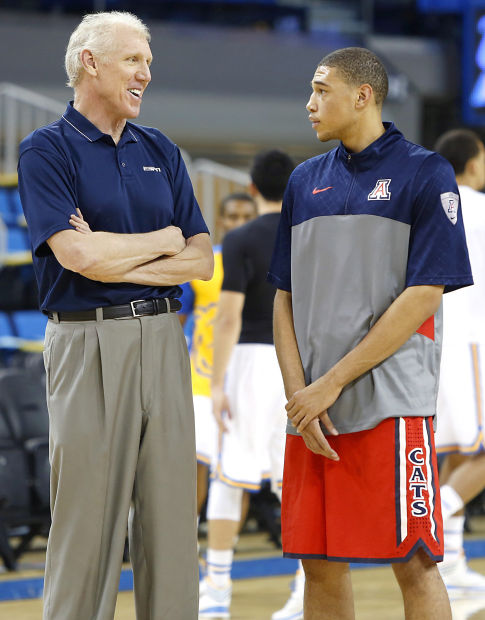 Bill Walton, a former UCLA basketball star, talks with Arizona Wildcats forward Brandon Ashley as the players warm up for the Jan. 9 game at Pauley Pavilion in Los Angeles.

By Andrew Kahn Special to the Arizona Daily Star

It’s easy to think Bill Walton and Dave Pasch don’t like each other. Take this exchange from a UA game the ESPN broadcast team called earlier this month:

Walton: “I’m never shocked by anything you say.”

Pasch: “I wish I could I say the same about you.”

Walton: “Are you old enough to remember when people used to defect?”

Pasch: “I don’t know if this is the right time to be discussing this.”

Walton then went on a stream-of-consciousness trip that included references to California weather, bumper cars at the Santa Monica Pier and a Jimmy Cliff concert, before Pasch said, “Back to reality. Hollis-Jefferson out to Johnson. …”

In the case of Walton and Pasch, who will call tonight’s Arizona-Stanford game on ESPN2, reality is in the eye of the beholder. To Walton, the 61-year-old former UCLA star with a stutter turned Deadhead turned analyst, basketball is a portal to life lessons, anecdotes and cultural references that would make comedian Dennis Miller proud.

Pasch plays the straight man. And while he frequently seems annoyed by Walton’s comments, he swears he isn’t.

“I like working with him,” Pasch said. “He’s probably the most candid Hall of Famer out there. …

“You don’t know what he’s going to say. You hope it’s clean, and if he goes off track you try to steer it back.”

That’s the challenge for one of the most entertaining broadcast duos in college basketball: making time for Walton’s asides without losing sight of the game itself.

The two don’t talk much before games, they say, but only because Walton loves telling Pasch to “save it for the air.”

“There’s nothing like a college basketball game,” Walton said. “Our job is to help people enjoy it and add value to the broadcast. It’s a wonderful job in a wonderful world full of beautiful people.”

Walton’s people hail from all walks of life. He wished folk singer Joan Baez and broadcasting legend Dick Enberg happy birthdays on air when the UA played at UCLA earlier this season.

Linda Ronstadt references are a must when Walton calls Wildcats games. In fact, Pasch voiced mock concern during Thursday’s game against Colorado when his color analyst went half the game without mentioning the Tucson native’s name.

Pasch grew up listening to Marv Albert, Bob Costas and Dick Stockton, three Syracuse University grads who attracted him to the school. He has done college basketball, college football, and NBA play-by-play for ESPN since 2003 and has been the radio voice of the Arizona Cardinals since 2002. He moves effortlessly among different sports because of his preparation, sense of timing and ability to work with a variety of analysts.

Asked if he could understand why viewers might think they don’t get along, Walton, in his distinctive deep voice, delivered this: “When everybody thinks alike, nobody thinks. It is an honor and privilege to work for Dave Pasch.”

The classically-trained play-by-play guy paired with the ex-athlete is nothing new, but Walton is far from typical. A three-time player of the year at UCLA and two-time NBA champion, Walton is among the NBA’s 50 greatest players. Unlike many of his contemporaries, Walton brings candor and originality to the booth.

And while Walton sent his son, Luke, to the UA, he’s capable of calling it like he sees it. Walton mentioned on a broadcast earlier this year that Gilbert Arenas, Luke’s former Wildcats teammate, had “lost his mind.”

Walton’s candor can be detrimental to the broadcast, especially when the subject is former UCLA coach Ben Howland. It can also be confusing, such as his short speech on the importance of seeds after cameras spotted a fan wearing a watermelon costume at a recent game.

But it’s mostly refreshing. Instead of clichés, Walton talks about this year’s Arizona team “playing for a spot in history. They know that people are planning their lives around their schedule.”

Tonight the Wildcats face what could be their toughest challenge in weeks. Expect Pasch and Walton to give the game the attention it deserves. Just don’t be surprised by references to Jerry Garcia, Southwest Airlines drink coupons or the Biosphere.

Andrew Kahn is a New York-based freelancer. On Twitter @andrewkahn

From basketball player, to Wildcat dad and sports analyst. Take a look at former UCLA and NBA star Bill Walton throughout the years.

From basketball player, to Wildcat dad and sports analyst. Take a look at former UCLA and NBA star Bill Walton throughout the years.

Bill Walton, a former UCLA basketball star, talks with Arizona Wildcats forward Brandon Ashley as the players warm up for the Jan. 9 game at Pauley Pavilion in Los Angeles.