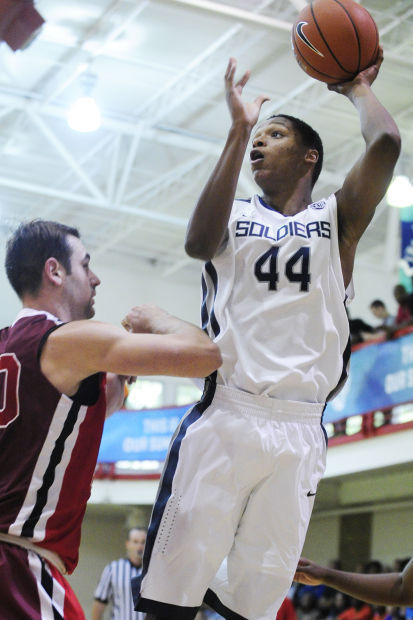 Ivan Rabb (44) would be a one-and done player at Arizona, but what a one year it could be. 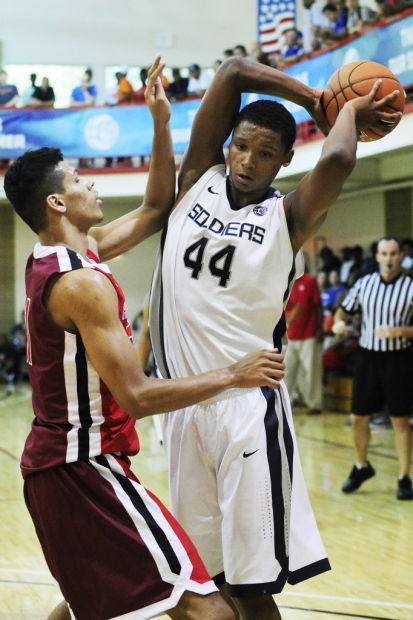 Ivan Rabb (44, with the Oakland Soldiers last summer) is expected to narrow his list to five schools.

Arizona busted out of the recruiting gate this summer to grab arguably the top class of 2015 basketball players in the country so far.

If they land a highly rated big man, the Wildcats might also finish with the top class.

Counting power forward Ryan Anderson, the Boston College transfer who will sit out this season before becoming eligible in 2015-16, that’s one guy for every position except center.

“For Sean Miller, the bottom line is this: He’s won every hand he’s played so far this year,” wrote ESPN.com recruiting analyst Adam Finkelstein after Trier’s commitment. “He has the scoring guard, athletic combo-forward, and big point guard he wanted — but they’ve all led up to this.”

This, of course, is a much-needed big man, the final piece for a team that could lose its entire starting lineup after next season.

Finkelstein wrote that Miller is “all-in” on Ivan Rabb, and it’s no surprise the other UA targets all are also 6 foot 8 inches or taller. Among them: Stephen Zimmerman of Las Vegas; Chance Comanche of Los Angeles; Caleb Swanigan of Fort Wayne, Indiana; and Tyler Davis of Plano, Texas.

Arizona “could have the best recruiting class in the country if it got Allonzo Trier, Ray Smith and Justin Simon and one or two other guys,” said Clark Francis, publisher of the Hoop Scoop recruiting service. “If they get Ivan Rabb, that’s a top one, two or three recruiting class.”

As of now, 247 Sports’ own ratings and that of its composite ranking system (which incorporates other analysts’ player rankings) both have UA in the No. 1 spot. According to 247 analyst Jerry Meyer, the 247 Sports rankings are based on both quantity and quality in a complex algorithm that a “monster army” of staffers work on.

The Wildcats and Duke, with wing Luke Kennard and center Chase Jeter, also rank among Scout.com’s top two classes, according to Scout analyst Josh Gershon, although that site has yet to publish early team rankings.

“We definitely have two top classes at this stage,” Gershon said.

Of their final targets, UA appears to be in better shape with Comanche than Zimmerman, but both of them have set official visits to Arizona this fall. In addition, Gershon said, Rabb told him he would probably visit UA for the Oct. 18 Red-Blue Game.

“My belief is that they probably lead for Comanche,” Gershon said. “I think heading into (Zimmerman’s) visit, I wouldn’t guess that Arizona is the team to beat by any means. But that being said, whenever you get a kid on campus, you have a shot.”

Comanche has a long, athletic 6-10 body, while the 7-foot Zimmerman is skilled in the low and high post, and the 6-11 Rabb uses his athleticism to make eye-opening plays on both ends of the court.

UA coach Miller said in June that he would probably seek to sign four total high school players in the fall, but it wouldn’t surprise Meyer if Miller took more than that if enough quality big men want to sign up.

“I think the focus is on Rabb and Comanche,” Meyer said. “They might be able to work it out where they could take both. I think Rabb is the No. 1, maybe 1A and Comanche is 1B. (Arizona) really likes Comanche’s upside, and he’ll be there more than one year. Rabb is a one-and-done anyway.

“Everybody views Rabb as the No. 1 prospect, but there’s stiff competition to land him. He’s pretty open in his recruitment.”

Trier out of Elite 24

Trier has pulled out of the Aug. 23 Elite 24 showcase game in New York for family reasons, his mother said.

Marcie Trier told the Star via text message that her son decided not to play because his little sister’s birthday is that weekend and because he will leave for Nevada’s Findlay Prep the following weekend. The family is now living in Oklahoma.

“It was a hard decision to make, but Zo will leave for prep school for a year then straight to Arizona the day after school ends and will be gone a long time,” Marcie Trier said. “So we want to cherish these last few days with him.”

Hazzard off to China

UA walk-on guard Jacob Hazzard will leave for China today along with 11 other Pac-12 players for a three-game exhibition tour that will be combined with sightseeing, academic missions and basketball clinics.

The team, to be coached by Utah’s Larry Krystkowiak, includes Pac-12 standouts such as Jordan Loveridge of Utah, DaVonte Lacy of Washington State, Xavier Johnson of Colorado and Andrew Andrews of Washington.

They will face a Chinese University all-star team Wednesday and professional Chinese teams on Thursday and Saturday.

UA’s top remaining big man targets in the class of 2015:

Maxpreps put together this compilation of Ivan Rabb highlights from 2013-14.

Ivan Rabb (44) would be a one-and done player at Arizona, but what a one year it could be.

Ivan Rabb (44, with the Oakland Soldiers last summer) is expected to narrow his list to five schools.