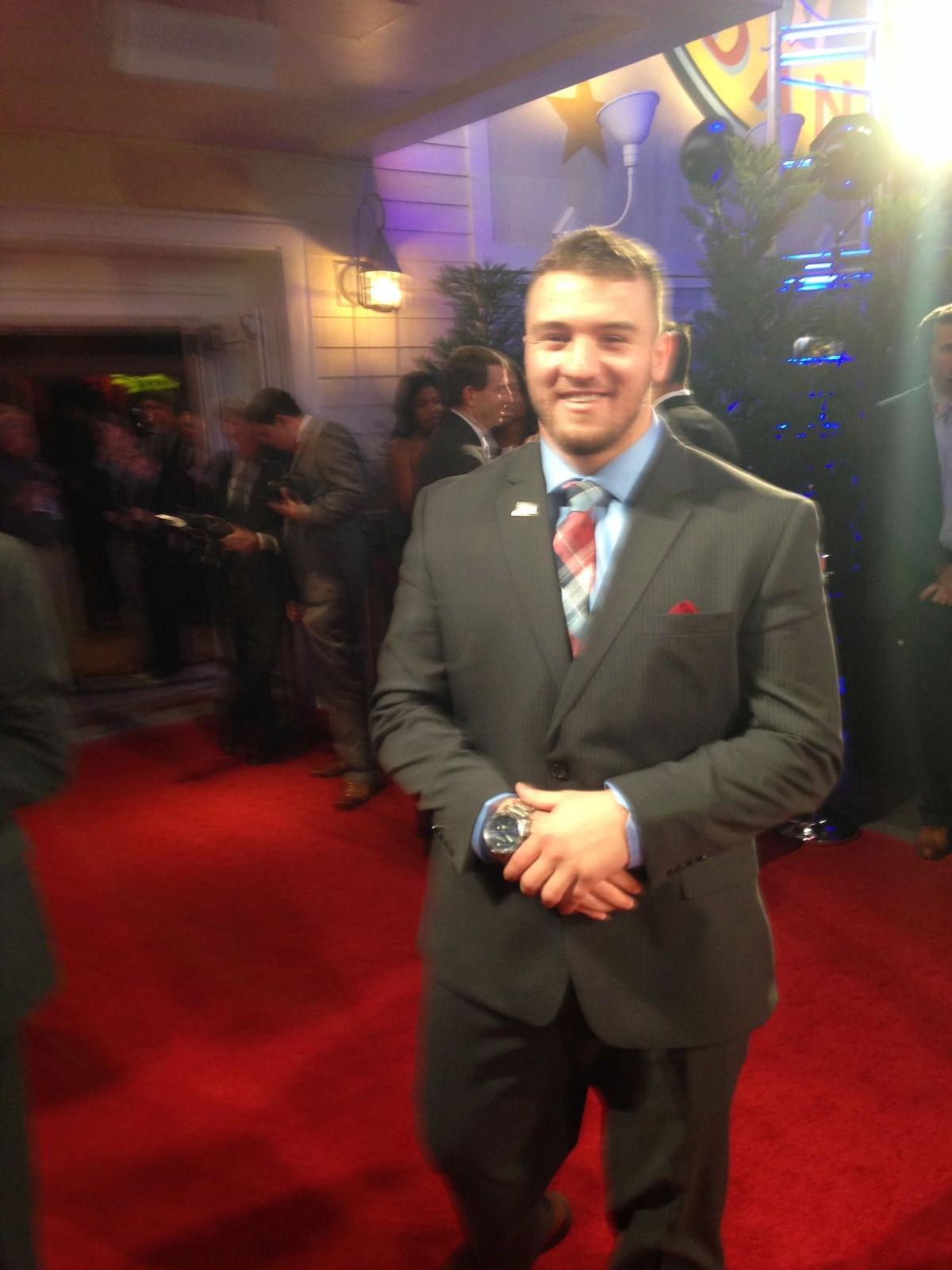 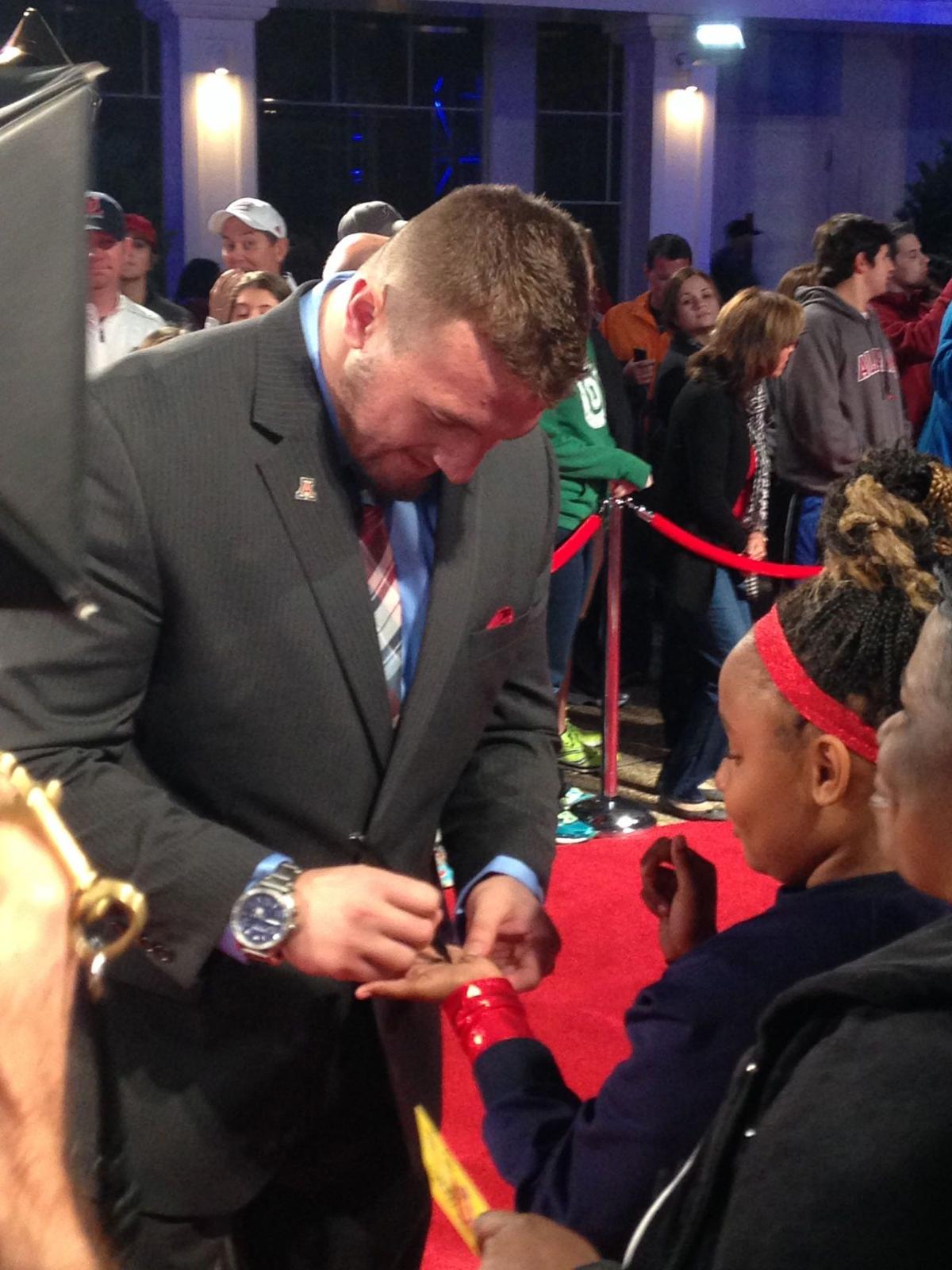 Arizona’s sophomore linebacker earned his third major award of the week tonight when he won the Chuck Bednarik Award, given to the top defensive player in college football.

Wright was announced as the winner at the Home Depot College Football Awards Show at the Atlantic Dance Hall on Disney’s Boardwalk.

The UA’s middle linebacker was nominated for the Bronko Nagurski Award, Rotary Lombardi Award and the Bednarik after his breakout sophomore season. He won them all, starting with the Nagurski Award on Monday in Charlotte, North Carolina.

He beat out Clemson’s Vic Beasley and Ohio State’s Joey Bosa to earn the Bednarik.

Wright will now put the banquet circuit behind him and return to Tucson tomorrow. He and the Wildcats will begin practices for the Vizio Fiesta Bowl on Dec. 31 against Boise State.

“I’m so ready to get back to work,” Wright said. “It’s been a fun week, but now it’s time to get back on the field, and I’m definitely ready.”

When he returns to the UA, he will officially be one of Arizona’s most decorated players.

Wright is the first player in UA history to win the Lombardi or Bednarik Awards.

He’s also the first Wildcat to win more than two major awards in one season. College Football Hall of Famer Rob Waldrop won the Outland Trophy and the Nagurski Award in 1993.

Wright leads the nation with 28 tackles-for-loss and six forced fumbles this season. He’s tops in the Pac-12 with 153 total tackles and is tied for third in the country with 14 sacks.

Wright arrived in Orlando this morning from Houston. He went through a couple of interviews with ESPN before joining the rest of the finalists from the awards show for a pre-show pizza party.

As has been the case all week, Wright had his mom and dad, along with his grandpa by his side for the night.

“I’ve had to pinch myself to make sure this is real,” Scooby’s grandfather, Phil, said. “It’s been an incredible experience that every grandfather dreams about going through. In all the years I’ve been involved in sports, this has been the most exciting weeks of them all.”

Wright, who was named a first team Walter Camp All-American earlier in the night, walked the red carpet before the awards show. It was lined with college football fans from all over the country. Florida State fans had the most fun with Wright asking the linebacker how to stop Oregon quarterback Marcus Mariota in advance of the College Football Playoff next month.

The UA’s star defensive player has had no choice but to get more comfortable with the spotlight as the week has gone on. He walked the red carpet with a wide smile on his face and signed autographs, while posing for pictures.

Wright finally took his seat for the awards show. The Bednarik Award was the second-to-last award announced. Former winner Teddy Lehman of Oklahoma presented the award.

Wright took the stage, wearing a suit for the second time in as many nights, to accept.

It’s the second straight year the Wildcats have sent a player to the College Football Awards Show. Running back Ka’Deem Carey was a finalist for the Doak Walker Award last year, but lost out to Boston College’s Andre Williams.

Sophomore linebacker has been on an absolute tear all season.

Sophomore linebacker has been on an absolute tear all season.