Arizona's Pac-12 opener vs. Washington will be postponed because of Huskies' COVID issues

GLENDALE — Arizona’s Jordan Hicks didn’t dare turn around as Minnesota’s potential game-winning field goal floated toward the uprights. Instead, he watched the videoboard for a moment and then locked eyes with Ezekial Turner, who had been knocked to the turf, his expression slowly turning to disbelief.

The Cardinals were 2-0. After being really good in a season-opening win last week, they enjoyed a little good fortune in Week 2.

Kyler Murray threw for 400 yards and three touchdowns, and the Cardinals beat the Vikings 34-33 on Sunday after Greg Joseph missed a 37-yard field goal wide right in the final seconds.

“I’d rather be lucky than good sometimes,” Cardinals tight end Maxx Williams said. “We got the ‘W’ with that missed field goal and I’m gonna celebrate it. It’s hard to be 2-0 in this league, it’s hard to win games in this league.

“It doesn’t matter how it happens.”

It was a fitting end to a seesaw game that saw the lead change hands eight times. The dizzying offensive pace — Arizona had a 24-23 halftime lead — slowed considerably in the final minutes, and there were no touchdowns in the final quarter.

Murray also ran for a touchdown and threw two costly interceptions, including one that was returned for a score. But there were a lot more good moments than bad.

“The game is really slowing down for him,” Cardinals coach Kliff Kingsbury said. “He’s doing stuff that he did at the collegiate level where he’s very confident in legs and moving around, extending plays.”

The Cardinals looked as if they were about to lose before Joseph’s last-second miss. He made two 52-yard field goals earlier in the game, giving no indication he’d have trouble pushing the Vikings to a win.

It’s another dispiriting setback for the Vikings (0-2), who lost in overtime at Cincinnati last weekend. Kirk Cousins threw for 244 yards and three touchdowns while Dalvin Cook ran for 131 yards on 22 carries.

Minnesota’s Nick Vigil returned an interception 39 yards for a touchdown on the second play of the third quarter, jumping in front of a pass Murray intended for Rondale Moore. It gave the Vikings a 30-24 lead.

Murray shook off the mistake and led the Cardinals on an eight-play, 75-yard drive capped by a 9-yard touchdown pass to veteran A.J. Green. It was Green’s first touchdown for the Cardinals and gave them a 31-30 lead.

The teams traded field goals in the fourth, with Matt Prater’s 27-yard kick giving Arizona a 34-33 lead with 4:25 left.

It looked as if another field goal would decide the game, but Joseph’s kick drifted right as the Cardinals celebrated. Joseph made a clutch 53-yard field goal last week to push the game to overtime.

It didn’t work out this time.

“I felt good about that kick,” Vikings coach Mike Zimmer said. “I knew he had missed the extra point earlier but he has been kicking good, we are indoors, perfect surface. I am thinking this should be an easy one here.”

Arizona led 24-23 at the break after Prater booted a franchise-record 62-yard field goal as time expired in an action-packed first half.

“I thought the end of the half was a huge swing,” Kingsbury said. “Matt hits a 62-yarder that gives us that momentum and we were able to hang on at the end. It was good. Week 1 we didn’t face adversity. We faced a bunch today and still found a way to get it done.”

Murray scampered out of the pocket late in the second quarter, spinning away from two defenders before finding a wide-open Moore for a 77-yard touchdown pass, giving the Cardinals their first lead at 21-20.

The Vikings’ secondary moved toward the line of scrimmage when Murray started scrambling and didn’t see Moore, who had settled behind the defense and didn’t have a defender within several yards. Moore — a rookie who was a second-round draft pick out of Purdue — finished with 114 yards receiving.

Minnesota responded with a quick drive downfield that was capped by Joseph’s 52-yard field goal.

The Vikings scored on just the second play of the game when Cousins found a wide-open K.J. Osborn for a 64-yard touchdown. There appeared to be a miscommunication in the Cardinals secondary on the play: Cornerback Byron Murphy stayed with Osborn for a few moments before stopping, and there wasn’t any help from the safeties deep.

DeAndre Hopkins caught a touchdown pass for the Cardinals. Osborn led the Vikings with 91 yards receiving.

Prater’s 62-yard field goal just before halftime nearly matched his NFL record of 64 yards that he set in 2013 while with the Denver Broncos.

The 37-year-old, two-time Pro Bowl kicker was acquired in the offseason as an upgrade for Zane Gonzales, who made some big kicks in 2020 but was also inconsistent.

Prater’s kick on Sunday had plenty of distance in the indoor setting, spitting the uprights with some room to spare.

Patrick Peterson returned to the desert after signing with the Vikings during the offseason. The three-time All-Pro played his first 10 seasons with the Cardinals and had 28 interceptions.

Peterson had a fairly quiet game, finishing with two tackles.

Vikings: Minnesota was without a handful of defensive contributors, including linebacker Anthony Barr (knee) and defensive end Everson Griffen (concussion).

The Vikings play at home for the first time this season when they host the Seattle Seahawks.

The Cardinals travel to face the Jacksonville Jaguars. Three of Arizona’s first four games this season are on the road.

Who: Cardinals at Jaguars

Pac-12 Hotline: Glimmers of light amid the Week Three carnage

By the numbers: How NAU managed to stun Arizona on Saturday night 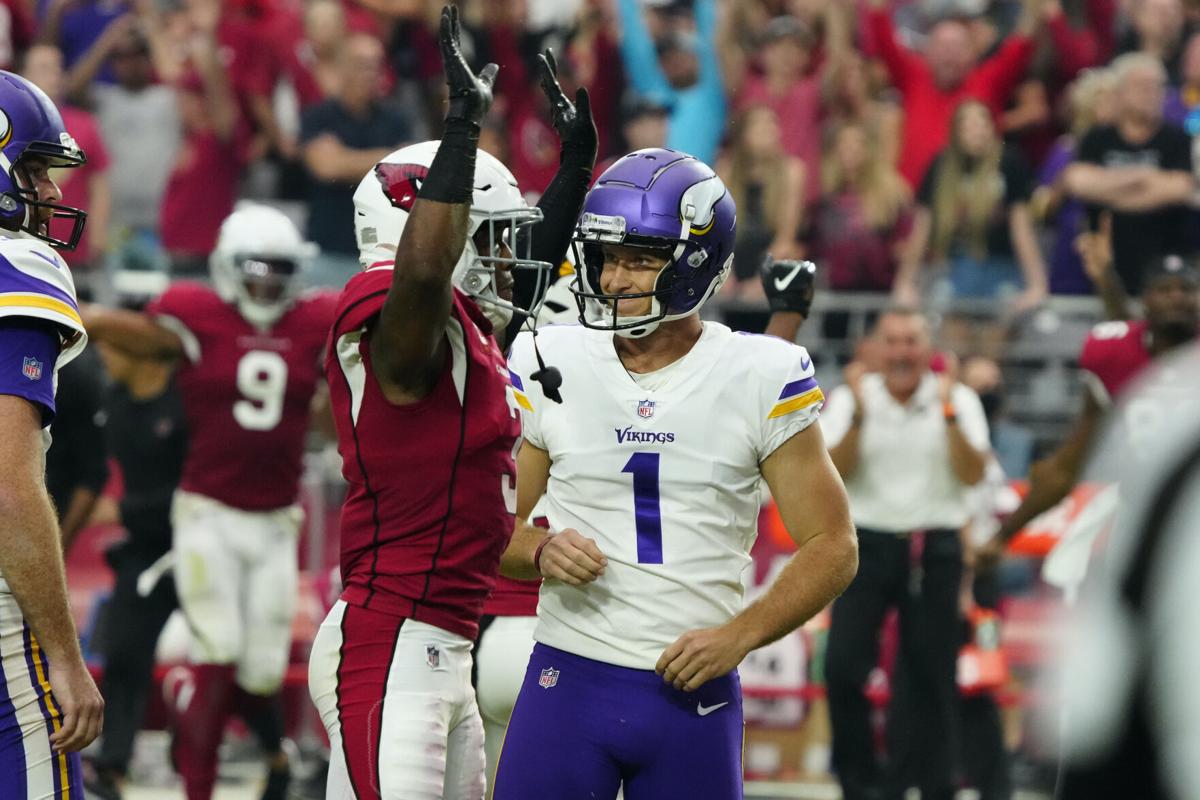 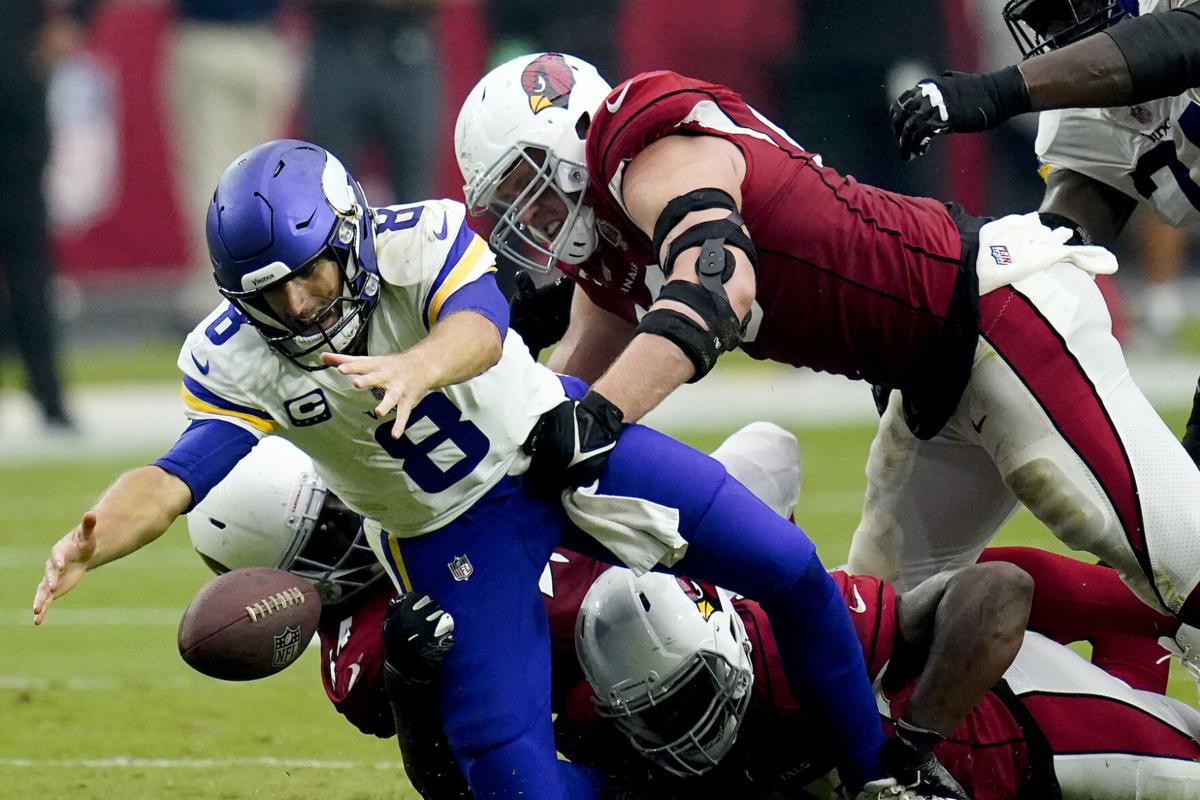