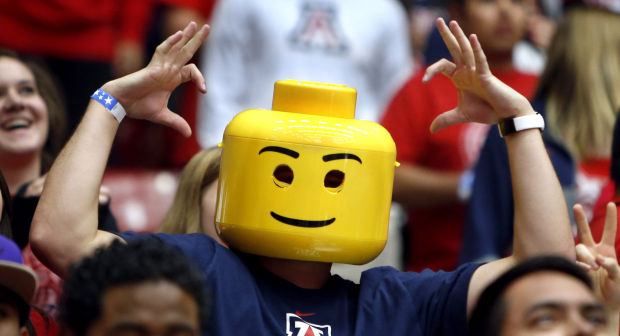 A denizen of the Zona Zoo student section flashes “WC” hand signals before last week’s basketball game between Arizona and Colorado in McKale Center. The hand sign originated by swimmer Simon Burnett in 2003 has finally taken firm root at the university. 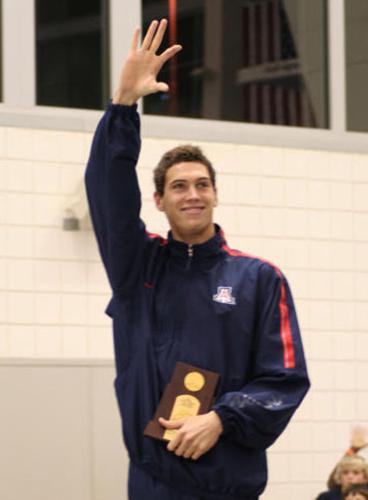 Former UA swimmer Simon Burnett invented the “WC” signal in 2003. “It took, what, 11 years? But we’re finally getting there,” he now says.

When Ka’Deem Carey set a new Arizona Wildcats record for rushing, the running backlifted his right hand and flashed a “WC,” extending his middle, ring and pinky fingers, bending his thumb and index finger.

When Arizona’s baseball team won the College World Series in 2012, players flashed the same sign as they were inundated with interviews and flashing cameras.

And in November, in a high school football state championship game, two future Wildcats celebrated a touchdown by jumping and throwing up “WC” signs together in the end zone.

“Does everybody do it now?” asked interim UA swim coach Rick DeMont, laughing.

The “WC” has become more commonplace in University of Arizona students’ Facebook posts. Even inside McKale Center, the last outpost of old-time tradition and home of the top-ranked Wildcats men’s basketball team, the sign reigns.

The 30-year-old former UA swimmer, Olympian, three-time NCAA champion and NCAA record-holder dreamed up the idea in 2003, as he and teammate Greg Owen drove to the Pac-10 Championships in Long Beach, Calif.

The seven-hour trek allowed Burnett, a freshman at the time, to brainstorm.

“I always said I just hate the fact that we don’t have a hand symbol,” Burnett said. “Texas and USC and even ASU had one. So we were just kind of talking about it. We were just like, ‘We should figure something out.’”

Burnett, a native of Oxford, England, thought of a friend on his home country’s Olympic team who used to do the “OK” symbol with his hand.

The three fingers sticking up almost looks like a “W.” Open that thumb-index circle and you can have a “C.”

Burnett didn’t debut the “WC” until a few weeks later, when he won the 200-meter freestyle at the NCAA Championships in Austin, Texas.

When he returned to Tucson, he was interviewed and photographed by the Daily Wildcat.

“I said, ‘Guys, look, I did this Wildcat symbol. I really would like for it to catch on,’ ” Burnett said.

A new phenomenon it wasn’t.

But slowly, the “WC” has taken hold, starting with Burnett’s swim team.

“I had never seen it before him,” said DeMont, a former UA star who has been an assistant with the Wildcats for 25 years. “It was such a no-brainer. I remember the impact it had, and instantly, when anybody won, that’s what they threw up. It caught on. It was a good idea.”

Gradually it crept into other, smaller sports — track and field and gymnastics.

“I guess the non-revenue sports kind of stick together,” Burnett said, laughing.

Burnett tried to get a push from the athletic department to popularize the hand signal. But officials worried that it looked a little odd — and their fears grew when a UA police officer launched a “small investigation” after seeing a picture of an athlete throwing up the sign, said Suzy Mason, the UA’s senior associate athletic director in charge of operations.

The probe was to determine whether the hand sign was gang-related.

“Maybe it could be” a gang sign, Burnett joked, “just not in the traditional sense.”

Now, Mason said, she likes it.

“It’s something they do when athletes are getting individual recognition, and calling attention back to the university, if you will,” Mason said.

For future Wildcats, the “WC” is a way to broadcast their next stop.

Pictures surfaced on Twitter of him teaching them the WC.

“I’m super-excited to be a Wildcat,” Deboskie said. “The major colleges all have their little signs. When you have a rising program, you should have something that kids, recruits and stuff, come in and see that.”

Burnett, now a swimmer and coach in Pasadena, Calif., said he couldn’t be prouder that after 11 years his idea has finally swum its way into UA’s mainstream.

“I said this right from the beginning: ‘We need a football player or a basketball player to do this,’” he said. “It took, what, 11 years? But we’re finally getting there.”

Want to show your Wildcat pride? It’s easy, and can be done in two, simple steps.

1. Extend your middle, ring and pinky finger straight out.

2. Bend your index finger and thumb forward just a little bit. To make it look more like a claw, you can bend the middle, ring and pinky a little bit, too.

Did you bleed to show the world your love of the Wildcats? Know someone who has?

Post a picture of your UA-themed tattoo on the Star's Facebook page, and we'll add it to a gallery that's quickly filling up. David Varner's ink — a Wildcat clawing through the iconic 'Block A' logo — went viral shortly after the Star posted it Thursday night.

Visit www.facebook.com/ArizonaDailyStar to check it out.

A denizen of the Zona Zoo student section flashes “WC” hand signals before last week’s basketball game between Arizona and Colorado in McKale Center. The hand sign originated by swimmer Simon Burnett in 2003 has finally taken firm root at the university.

Former UA swimmer Simon Burnett invented the “WC” signal in 2003. “It took, what, 11 years? But we’re finally getting there,” he now says.