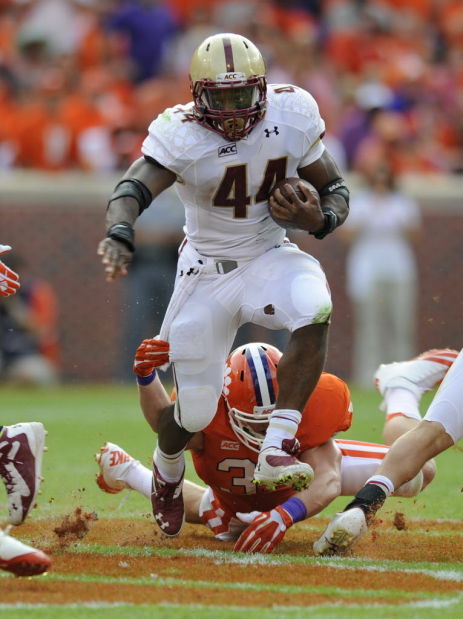 FILE - In this Oct. 12, 2013 file photo, Boston College running back Andre Williams (44) rushes out of the tackle-attempt by Clemson's Scott Shuey during the first half of an NCAA college football game in Clemson, S.C. Williams is a finalist for the Heisman Trophy. (AP Photo/ Richard Shiro, File) 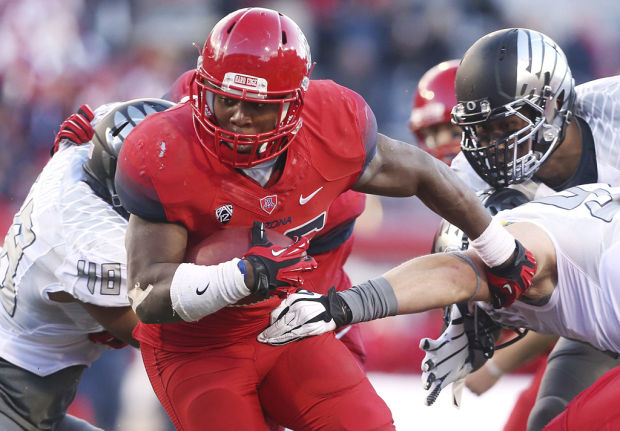 If Ka’Deem Carey scores a touchdown in the AdvoCare V100 Bowl later this month, make sure you watch what he does next.

Now that he’s got a friend on the other sideline in Boston College star running back Andre Williams, Carey has a little something fun planned.

“When I score a touchdown, you best believe I’m throwing up a ‘4-4,’  ” said Carey, referencing Williams’ uniform number. “Now that I know him, I can do that because we have inside jokes.”

Carey and Williams got some bonding time in this week while both were in Florida for the announcement of the Doak Walker Award winner. The two met Wednesday night during a media availability and had a couple of meals together, did an ESPN interview side by side and got some time to talk.

Williams said he doesn’t remember exactly when he heard Carey’s name for the first time because “I hear it all the time now.”

“It was really great to meet him,” Williams said. “I get to play one more game, and he’s going to be lining up on the other side of the field.”

Now that a friendship has been formed, it’s time for battle.

Williams has landed the first two big punches by winning the Doak Walker Award and being named a finalist for the Heisman Trophy over Carey, but the UA standout can still have the last laugh with a win in Shreveport, La.

Of course, for that to happen the Wildcats will have to contain Williams, which is easier said than done.

The Boston College senior rushed for 2,102 yards and 17 touchdowns for the Golden Eagles this season. He went over 200 yards in five games this year, including a 339-yard performance against North Carolina State last month.

He had 15 touchdowns over his last eight games, and in a three-game stretch against N.C. State, New Mexico State and Maryland, Williams rushed for 897 yards and six touchdowns.

Listed at 6 feet tall and 227 pounds, Williams is a bruiser, but like Carey, can be dangerous in the open field.

“A guy that big that runs away from people, that’s what you notice the most,” UA coach Rich Rodriguez said. “He’s not just running away from linebackers, he’s running away from DBs. He understands what they’re doing. He runs to the right spot, and he can break arm tackles.”

The Wildcats rank 70th in the country in rushing defense, allowing 169.8 yards per game on the ground. But on the flip side, the UA has allowed only two running backs — Washington’s Bishop Sankey and ASU’s D.J. Foster — to rush for more than 100 yards in a game.

UA defensive players have started to watch film of Williams and the Boston College offense and know he’ll be a load to handle.

“He’s a very powerful back,” UA linebacker Jake Fischer said. “They do a lot of things trying to get an edge on you. They like to bring in extra offensive linemen, extra tight ends and run the ball right at you. We might have to do a few things differently.

“He’s a great back, and we’ll have our hands full.”

Rodriguez said he wasn’t all that concerned with the Williams-Carey individual award battle but had no problem with Williams winning the Doak Walker over Carey.

“He’s deserving,” Rodriguez said. “The guy rushed for 2,000 yards; it’s not like he’s not deserving. I just like our guy more.”

It's a Tucson tradition: Visit azstarnet.com/bowls to register for the Star's annual bowl contest. Look for details and sports editor Ryan Finley's picks this week.

FILE - In this Oct. 12, 2013 file photo, Boston College running back Andre Williams (44) rushes out of the tackle-attempt by Clemson's Scott Shuey during the first half of an NCAA college football game in Clemson, S.C. Williams is a finalist for the Heisman Trophy. (AP Photo/ Richard Shiro, File)