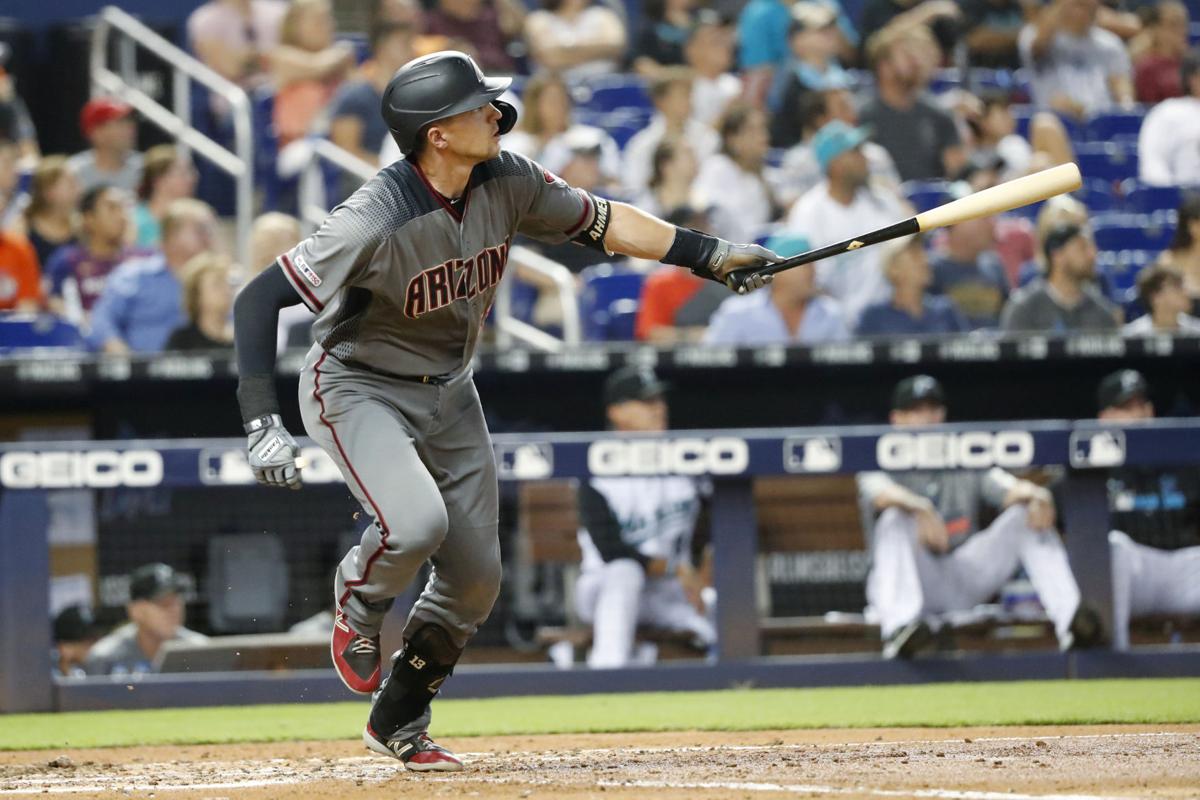 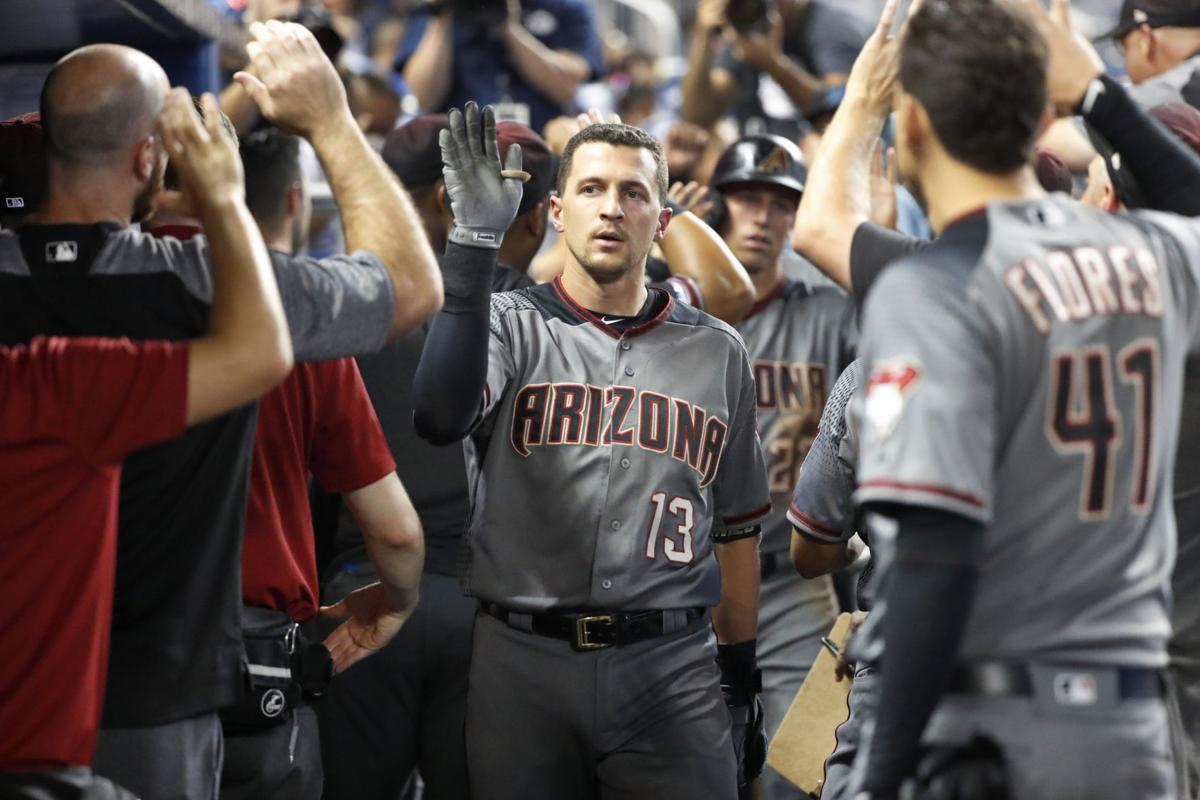 Arizona Diamondbacks' Nick Ahmed (13) is congratulated by teammates after he hit a grand slam home run scoring Eduardo Escobar, Christian Walker and Jake Lamb during the fourth inning of a baseball game against the Miami Marlins, Saturday, July 27, 2019, in Miami. (AP Photo/Wilfredo Lee)

After the Miami Marlins rookie retired his first nine hitters, the Diamondbacks were ready in the fourth inning. Nick Ahmed hit a grand slam that keyed a six-run outburst as Arizona won 9-2 on Saturday night.

"He shut us down for three innings," Ahmed said. "Guys grinded out some at-bats. We didn't get a lot of hits that inning but we were able to break up the guy's rhythm."

In addition to Ahmed's homer, the Diamondbacks got a run-scoring single from Eduardo Escobar and David Peralta's RBI groundout.

"It was continuing a trend where we couldn't get anything going," manager Torey Lovullo said, noting Friday night's 3-2 loss. "But our guys rallied around one another. We started a little bit of a rally. The right guys at the right time came up and knocked them in."

Alex Young (4-0) allowed two runs and eight hits in six-plus innings. The rookie left-hander struck out two, walked one and has won three of his four decisions on the road.

"After those six runs, I wanted to go out there and get quick outs," Young said.

Yamamoto (4-2) walked Jarrod Dyson and Ketel Marte to start the fourth. The right-hander also walked Jake Lamb and hit Christian Walker with a pitch in the inning.

Both benches cleared in the eighth after Walker was plunked a second time by Miami reliever Tayron Guerrero. As an upset Walker, who was hit on his left forearm, removed his helmet and walked toward first, Guerrero gestured at the Arizona dugout and exchanged words.

There were no ejections, but plate umpire Bruce Dreckman issued warnings to both teams.

After needing only 35 pitches to get through the first three innings, Yamamoto threw 38 in the fourth. He allowed six runs, two hits and four walks while striking out three in four innings. He has lost consecutive decisions after starting his major league career with four straight wins.

"The bases on balls have been a little bit of an issue," Miami manager Don Mattingly said. "It's something he's going to have to get a hold of. It's hard to sustain success when you're putting people out there too often."

Jake Lamb increased Arizona's lead to 8-1 with his two-run homer off reliever Wei-Yin Chen in the sixth.

Stefan Chricton relieved Young after he gave up Martin Prado's RBI double in the seventh and retired all three batters he faced in the inning. Chricton also pitched a scoreless eighth before T.J. McFarland closed with a perfect ninth.

Miguel Rojas' leadoff homer in the first gave the Marlins a 1-0 lead.

Miami traded veteran reliever Sergio Romo, minor league pitcher Chris Vallimont and a player to be named to the AL Central-leading Minnesota Twins for minor league first baseman Lewin Diaz. The 22-year-old Diaz was hitting a combined .297 with 19 home runs and 61 RBIs in Class A and Double-A.

Walker had noticeable swelling on his left arm after absorbing Guerrero's 98 mph pitch. The Diamondbacks first baseman doesn't believe Guerrero threw at him intentionally but was proud of how his teammates reacted to the reliever's gestures toward their dugout.

"I love it. It gives me so much confidence to have teammates like that," Walker said. "They had my back."

Lovullo objected to his team being issued a warning.

"Our guys were chirping from the dugout and that's part of the game," Lovullo said. "Protecting one another. Figure it out, throw the ball over the plate. Guerrero took exception to that, stepped off the mound and basically called out our whole dugout. I felt we were bystanders in the whole process and are reprimanded. And I don't like that. We did nothing wrong."

Mattingly understood why the Diamondbacks got upset but said Guerrero didn't throw at Walker intentionally.

"I'm 100 percent knowing he didn't do it on purpose, but you also know the other side," Mattingly said. "You know the frustration when the same guy gets hit twice in the same area."

Diamondbacks: OF-C Blake Swihart (oblique) homered on a rehab assignment Friday with Triple-A Reno. Swihart has alternated between designated hitter and outfield since he joined the Aces earlier in the week.

Diamondbacks: LHP Robbie Ray (9-6, 3.95 ERA) will start Sunday as he continues to be mentioned in trade talk before Wednesday's deadline. Ray has won his first four outings in July.

Marlins: Spot starter Elieser Hernandez (1-4, 5.24) replaces Trevor Richards, who was moved to the bullpen and pitched an inning of scoreless relief Friday.

Who: D-backs at Marlins

Arizona Diamondbacks' Nick Ahmed (13) is congratulated by teammates after he hit a grand slam home run scoring Eduardo Escobar, Christian Walker and Jake Lamb during the fourth inning of a baseball game against the Miami Marlins, Saturday, July 27, 2019, in Miami. (AP Photo/Wilfredo Lee)