PHOENIX — A little rest did a lot of good for Willson Contreras.

The durable catcher capped Chicago’s three-run ninth inning with a two-run homer, sending the Cubs to a 4-2 victory over the lowly Diamondbacks on Saturday.

Contreras had three hits and scored twice. He has played in 82 of Chicago’s 92 games this season, and manager David Ross said he benefitted from the All-Star break.

“He’s carrying a heavy load for us this year,” Ross said. “For him to get his legs under him at the All-Star break and come through like he did tonight. That’s the right-handed hitter he’s capable of being. He’s pretty good in the box.”

Chicago was down 2-1 before it rallied with two out in the ninth. Rafael Ortega doubled and scored on Robinson Chirinos’ pinch-hit single off Joakim Soria (1-4). Contreras then hit a drive to left for his 14th homer. Contreras said he took four days off during the break, and it “was really refreshing on my body. Of course I want to play every single day, but I also understand the body needs at least one off day.”

Rex Brothers (3-2) got three outs for the win, and All-Star Craig Kimbrel worked the ninth for his 21st save. It was career save No. 369 for Kimbrel, snapping a tie with Jonathan Papelbon for ninth on baseball’s all-time list.

It was the Cubs’ first win when trailing entering the ninth inning since Sept. 12, 2020, at Milwaukee.

Arizona wasted a strong performance by Zac Gallen, who threw 5 2/3 innings of one-run ball in his return from the injured list. Gallen had been sidelined by a strained hamstring.

“He was fantastic,” manager Torey Lovullo said. “Gave up one run. He was in control of every inning. ... Typical Zac stuff, a ton of swing and miss.”

Gallen said he wasn’t surprised by his sharpness because he missed just one start.

“I felt pretty crisp once I got out there and was able to make some pitches,” he said. “I was able to shape pitches the way I wanted to. Overall I was happy with it.”

Gallen was visibly displeased when Lovullo pulled him in the sixth, and the two had a private conversation in the tunnel leading to Arizona’s dugout.

“I felt like I still had more in the tank,” Gallen said. “In that sense we butted heads.”

Nick Ahmed and Josh Rojas each drove in a run for the last-place Diamondbacks, who have dropped five of six.

“It’s like biting on an onion,” Lovullo said. “It’s painful. It hurts.”

The Diamondbacks jumped in front on Ahmed’s run-scoring groundout in the second, and Rojas made it 2-0 when he singled in Ahmed in the fifth.

Cubs right-hander Adbert Alzolay allowed five hits, struck out two and walked two in five innings. The Cubs rallied in the sixth. Contreras singled with one out, advanced on a walk by Anthony Rizzo and scored on Javier Báez’s double off the wall in center.

Chicago had a chance for more, but Kris Bryant to hit a ground ball to third baseman Eduardo Escobar, who threw Rizzo out at home. Gallen then was replaced by left-hander Joe Mantiply, who retired Jason Heyward on a line drive to center.

Diamondbacks right-handers Luke Weaver (shoulder) and Taylor Clarke (shoulder) threw bullpen sessions. Lovullo said the coaching staff isn’t certain whether Weaver will rejoin the rotation or pitch out of the bullpen when returns.

Reliever Tyler Clippard (shoulder) threw 26 pitches in an inning of work for Triple-A Reno on Friday. His next step is uncertain, Lovullo said.

From red-hot Shohei Ohtani to dreadful D-backs, MLB's first half has been full of surprises

The sport moves into its All-Star break with tight races in nearly every division as ballparks are slowly filling back up with the relaxation of COVID-19 restrictions.

Devin Booker's 42 points not enough as Suns search for answers

Milwaukee gets back into game in second quarter while Booker sits.

“It’s really refreshing, even through the bad times, to have something that resonates with the fans because the fans are the people who are most important right now during the bad times." 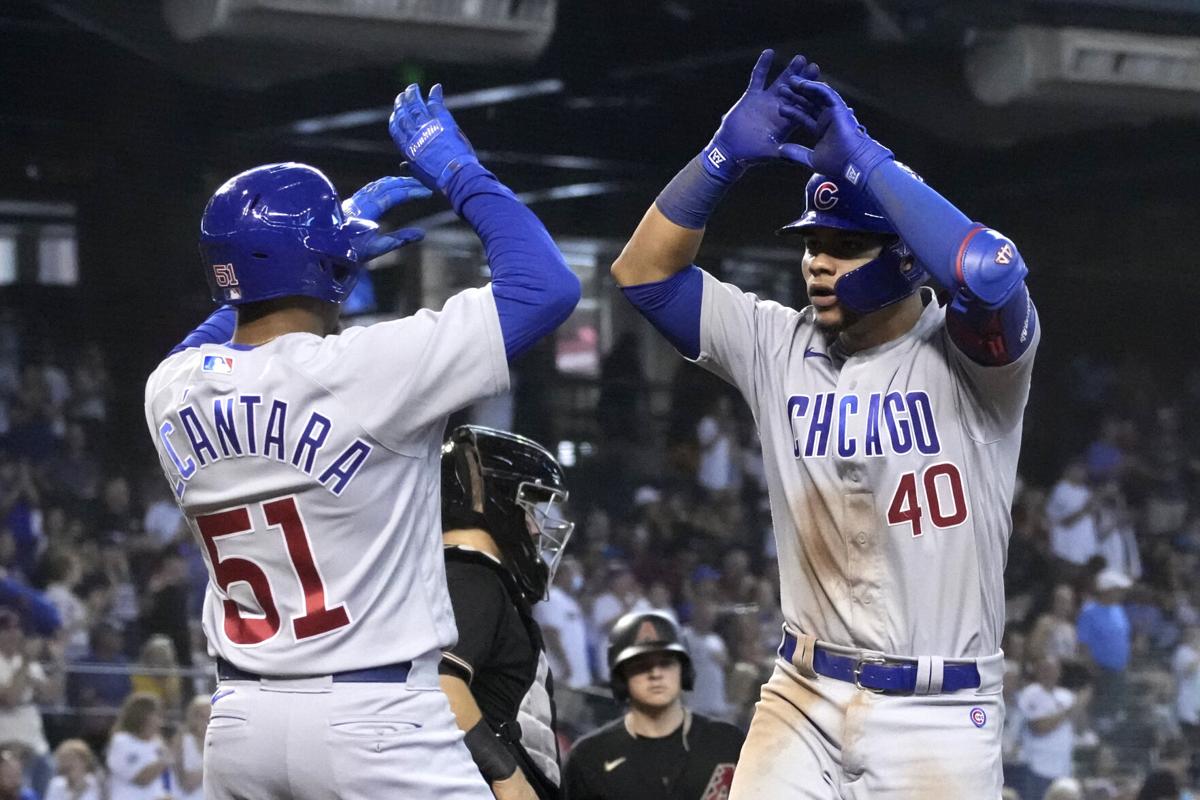 Chicago’s Willson Contreras celebrates with teammate Sergio Alcantara after hitting a two-run home run in the ninth inning of Saturday’s come-from-behind win over the Diamondbacks. 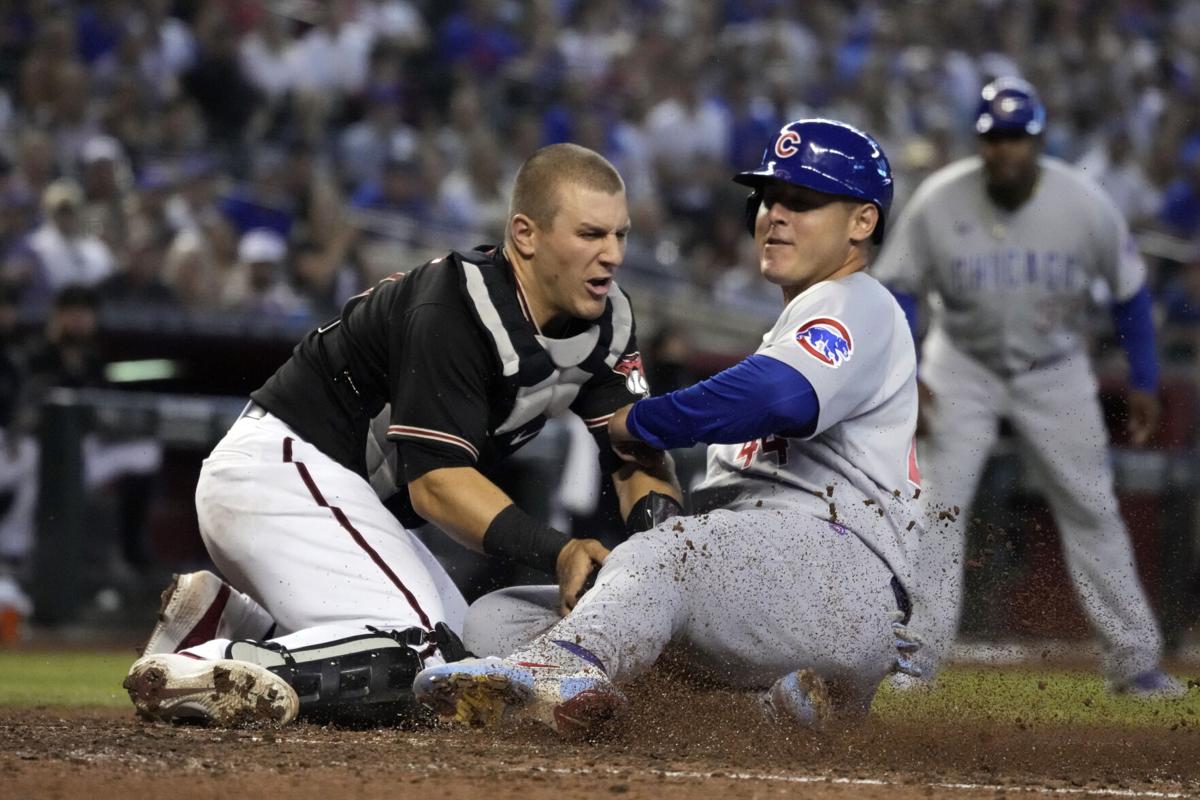 Diamondbacks catcher Daulton Varsho tags out the Cubs’ Anthony Rizzo in a sixth-inning play at the plate.