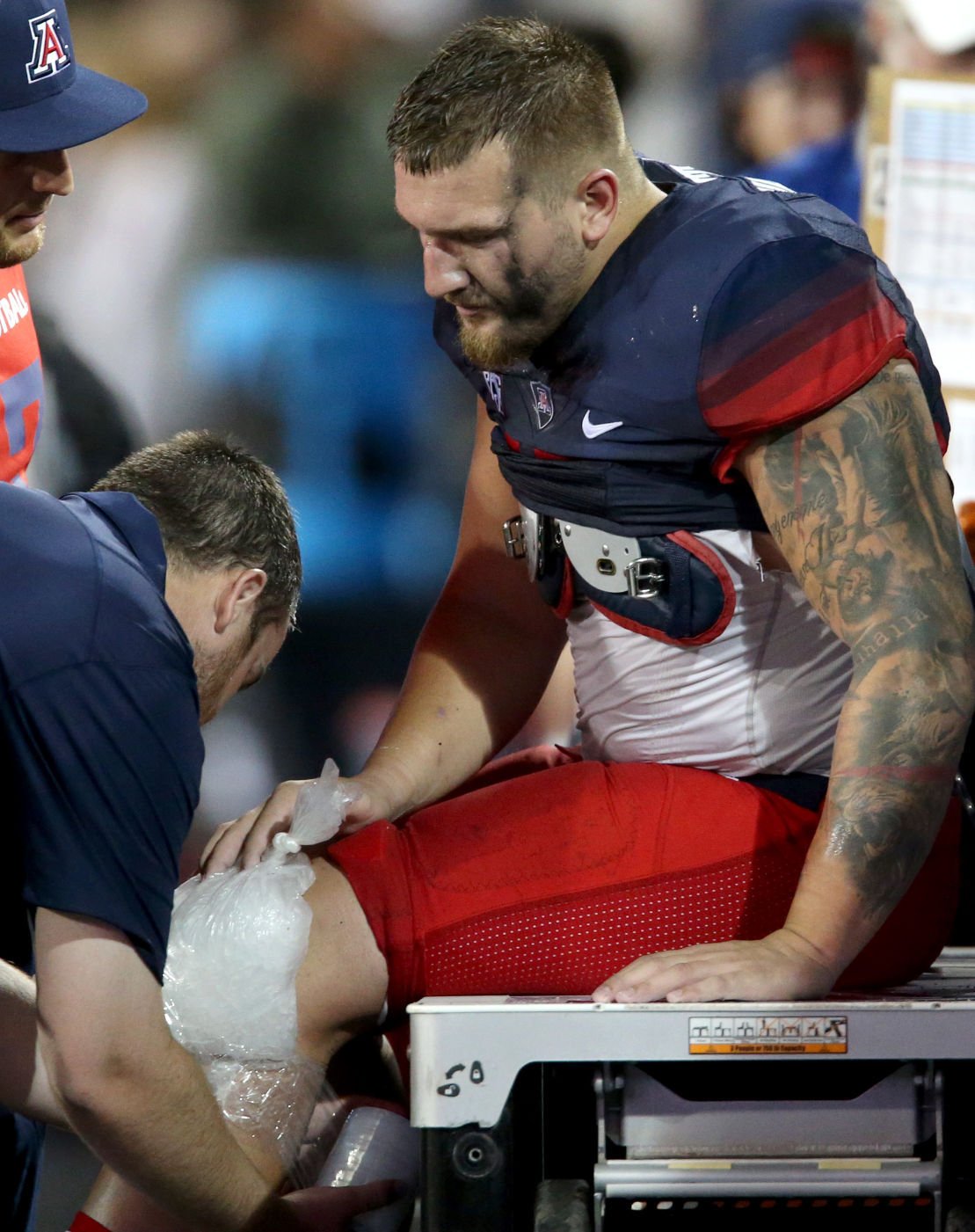 What if Arizona linebacker Scooby Wright III had played more than five quarters this season? Might the Cats be 7-4 right now or even 8-3? 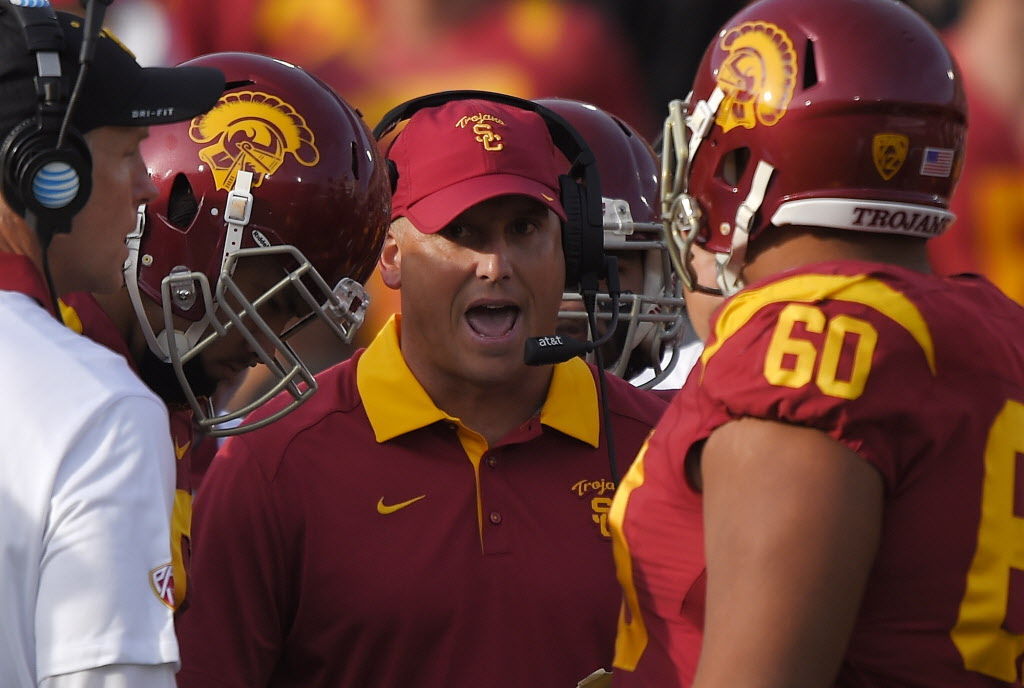 Playing the “What-if” game: What if Clay Helton had taken over at USC before the season began? Would the Trojans have one or two more victories?

There has been more talk about cannibalism in the Pac-12 than in a Hannibal Lecter movie, and there have been five of those.

Last week was the grisliest one yet.

Stanford lost to Oregon, and Arizona upset Utah, likely ending the Pac-12’s chances of advancing to the College Football Playoff. The two wins confirmed what coaches around the conference have known for months: This is a tough conference, and it’s been a weird year.

It didn’t have to be this way. In an alternate universe, Scooby Wright is taking down ball carriers, and Arizona is competitive, Clay Helton is leading USC to national prominence, and Vernon Adams is a Heisman Trophy candidate.

“What If” Scenario No. 1: Injuries

Quarterback Vernon Adams came in with a lot of hype and faded out of the spotlight for a few weeks after Oregon’s three-point loss to Michigan State. While Adams rehabbed a finger injury, the Ducks got killed by Utah and lost in overtime to Washington State.

Adams has since healed, and the Ducks are rolling.

During the Ducks’ four-game winning streak, Adams has averaged 273 passing yards per game with 12 touchdowns and two interceptions. He is completing 60.3 percent of his passes. Projected over a full season, Adams would average 3,276 yards, 36 touchdowns and six interceptions.

What if he hadn’t hurt his hand? The Ducks might not have lost more than one conference game, and, in a weak Heisman year, Adams’ name might have been mentioned more than once.

Somehow, though, UCLA is still only a game out of first place in the Pac-12 South with games against Utah and USC to finish the season.

What if UCLA’s defense wasn’t decimated by injuries? Well, the Bruins might be fighting to keep in first place instead of stealing it from someone else.

“I don’t think everything’s in the books yet,” coach Jim Mora said. “But it’s proven that this is an extremely difficult conference to survive.”

The Wildcats lost star linebacker Scooby Wright in Week 1 and then again after Week 4. He has played five quarters all season. Running back Nick Wilson hasn’t been healthy in a month, and quarterback Anu Solomon has suffered two concussions.

What if, at minimum, Wright actually played this season? The Wildcats might not have upset Stanford but certainly could have defeated Washington State or USC. The Cougars beat Arizona by three points, and the Trojans won by eight.

The Cardinal struggled in a season-opening 16-6 loss to Northwestern.

Christian McCaffrey, a bonafide Heisman contender in recent weeks before the Oregon loss, had only 12 carries against Northwestern. Quarterback Kevin Hogan — arguably the second-best QB in the conference, after Washington State’s Luke Falk — had his worst game of the season with 155 yards, zero touchdowns and one interception.

What if McCaffrey had more touches, and Stanford’s offense didn’t falter in a very winnable game?

Well, with one loss, the Cardinal would still be very much in the college football playoff discussion.

“Bottom line is, it’s a different era in college football right now,” Stanford coach David Shaw said. “Wow, what you have to concentrate on is winning your conference.”

Washington State suffered one of the worst nonconference losses in college football when it fell to Portland State, an FCS program, in its season-opener.

It was the only game in which Falk did not pass for 300 yards. The Cougars have since been the surprise of the conference, winning seven of nine games, including an upset of Oregon. Their two losses have come by a combined eight points.

What would a win against PSU have done? Maybe not much, but the Cougars would have had a better shot at one of the selection committee bowls if not for that mishap.

What if athletic director Pat Haden had made the right choice and suspended Steve Sarkisian after his preseason drunken outburst at an alumni event?

The Trojans have found themselves under interim coach Helton, winning four straight after a costly two-game losing streak. Now, they are tied with Utah for first place in the Pac-12 South and hold the tiebreaker, having upset the Utes on Oct. 24.

With Helton at the helm, maybe USC doesn’t score just 12 points in a loss to Washington or allow 41 in one to Stanford.

Take away one — or both — of those, and USC’s season shines in a much different light.

“I think the thing I’m most proud of is the physical nature and mental toughness they have right now,” Helton said of his team.

Anu Solomon questionable to play against ASU because of concussion

Cats' quarterback was injured in fourth quarter of Saturday's win over No. 10 Utah.

UA senior Will Parks talks about why he became a Wildcat and what his years here have been like.

Relive Arizona's upset over No. 10 Utah in three-and-a-half-minutes.

What if Arizona linebacker Scooby Wright III had played more than five quarters this season? Might the Cats be 7-4 right now or even 8-3?

Playing the “What-if” game: What if Clay Helton had taken over at USC before the season began? Would the Trojans have one or two more victories?