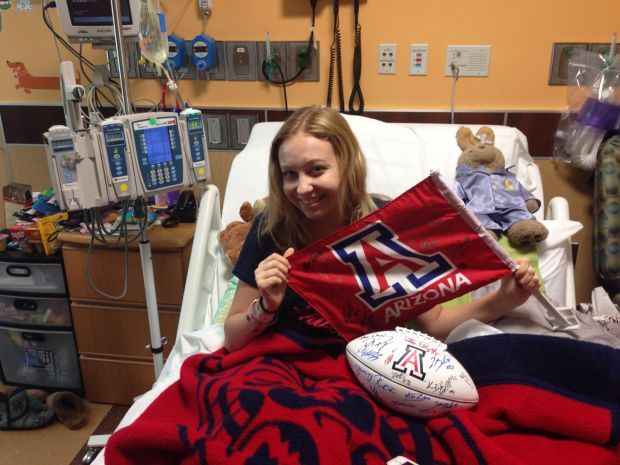 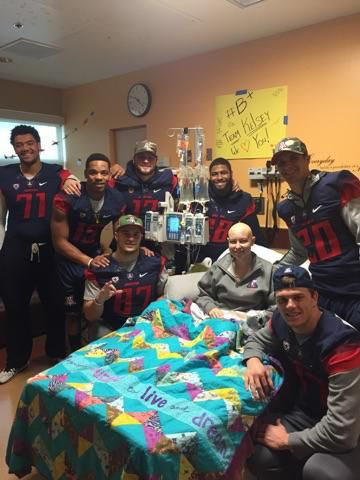 Kelsey Luria with UA football players who visited her at Diamond Children’s hospital. “We just catch up and hang out,” she said last year.

Rich Rodriguez hears about most of the patients his players visit the day before home games at Diamond Children’s hospital.

“It’s very sad,” Rodriguez said Wednesday. “I hope the guys that did get to know Kelsey maybe somehow uplifted her a little bit while she was battling a terrible disease. It’s just an awful disease, particularly in children and young people.

“Kelsey was probably even better known to our players because she was involved in football as a trainer.”

Kelsey had spent nearly the entire time since her diagnosis at the hospital. She died just a few days after her birthday.

“You feel terrible for the family,” said Rodriguez, whose son Rhett played for the team Kelsey worked for. “Any time you feel like things aren’t going well or you’re having a bad day, you think about Kelsey and her family and it puts everything in perspective.”

Kelsey got to know some UA players very well.

Running back Terris Jones-Grigsby came by on his own time to visit, she told the Star in December. Kelsey kept in touch with kicker Casey Skowron, safety Trevor Ermisch and others.

The UA players got to know Kelsey on one of their trips to the hospital. Select players visited on Fridays before home games during the season; Ermisch and Skowron were among the first to meet Kelsey.

“She was really excited when we all walked in,” Ermisch said in December.

Rodriguez started having his players visit the children’s hospital in town when he was at West Virginia. He continued it at Michigan and brought it to Arizona.

He said he hopes his players learned from Kelsey to “be appreciative of what they have and thankful for the opportunities they have.”

“I think it’s pretty common in college for athletes to go over, but I think they get as much or more out of it than the kids do,” he said.

The admiration in the UA football-Kelsey relationship went both ways.

Kelsey’s parents, Michael and Maya, nominated the team for a local award, Ben’s Bells, which recognizes acts of kindness. The team received the honor after a fall practice, which Michael attended.

Many of the UA players wore purple wristbands Kelsey gave them, a move that warmed the Luria family.

“She’s missed being with her football team, so it’s always so special when the UA team comes to visit her,” Maya said in December. “She’s always watching to see if they are wearing her bands when they come in now.”

Skowron showed he was when he posed for a picture in the band before a game this season and posted it to social media.

“I’ve gotten to know a lot of them, and so we just catch up and hang out,” Kelsey said last year. “They treat it like it’s not a big deal, which is cool.”

Kelsey’s family has set up a website, BaldBeautiesProject.org, “in honor of Kelsey and her ambition to change the world for other children afflicted with pediatric cancer.”

“I don’t think there’s anything more trying than having a sick child,” Rodriguez said. “Having children myself, you would much rather you have it than your children. That’s where you feel terrible for the families.

“All the problems we’re facing in the world, I would hope someday we would put every ounce of effort and energy in trying to help for a cure in cancer.”

Kelsey Luria with UA football players who visited her at Diamond Children’s hospital. “We just catch up and hang out,” she said last year.