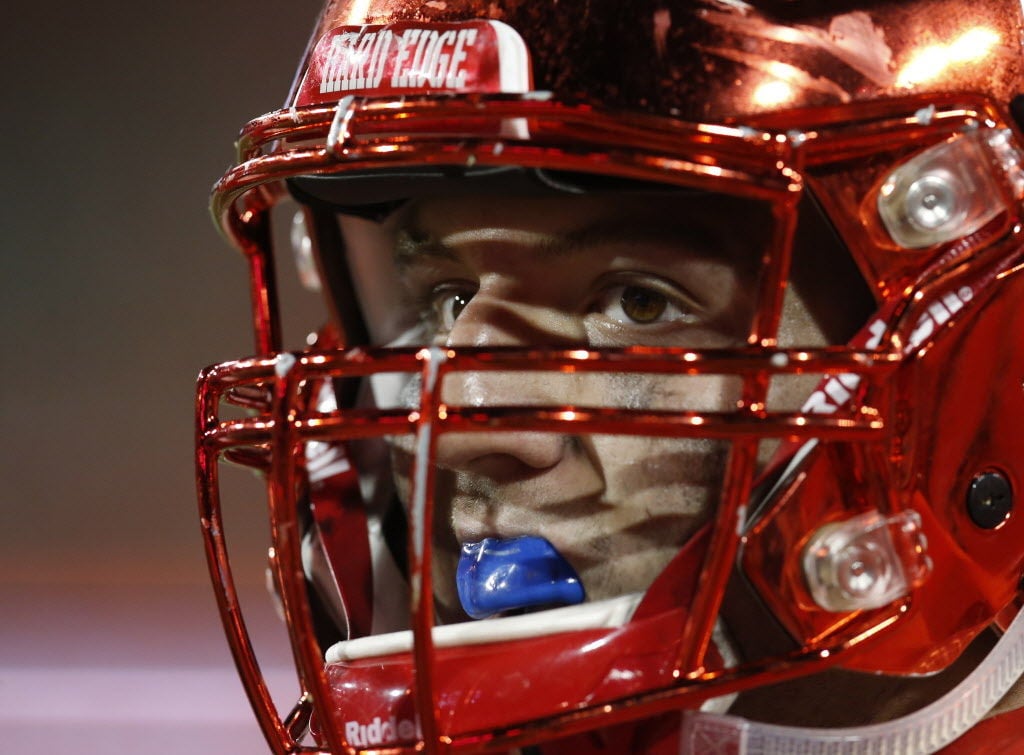 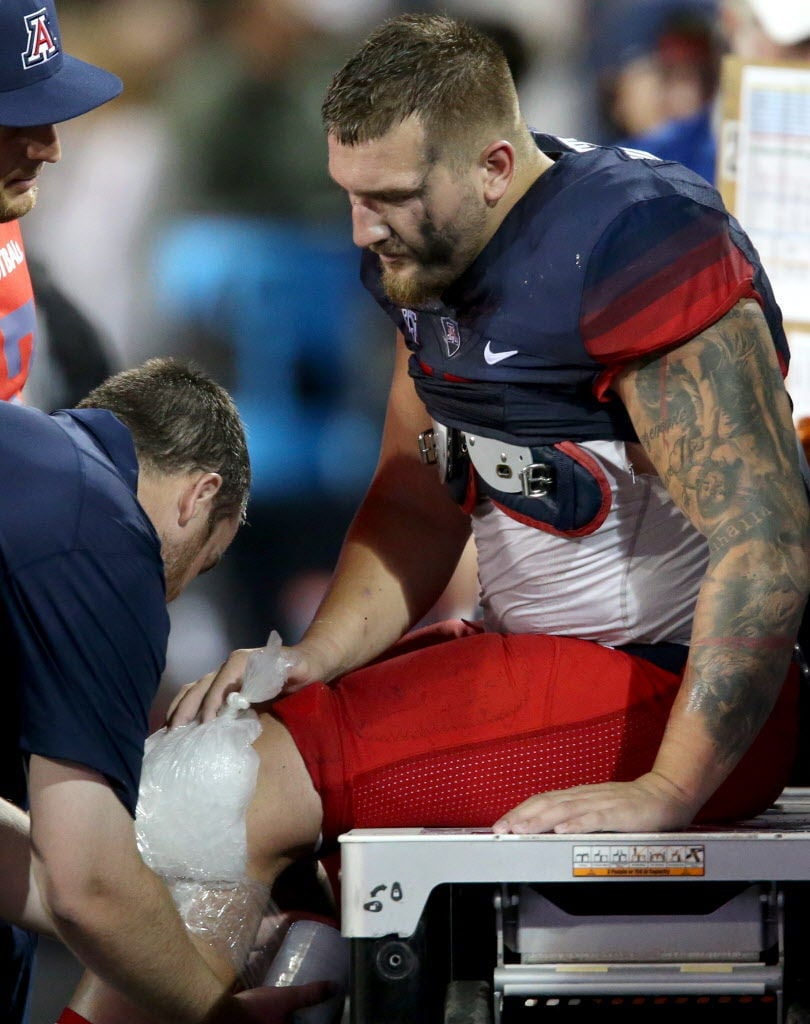 Arizona linebacker Scooby Wright III (33) gets his knee iced down on the sidelines just before the start of the second quarter against UTSA at Arizona Stadium, Thursday Sept. 3, 2015, Tucson, Ariz. Kelly Presnell / Arizona Daily Star 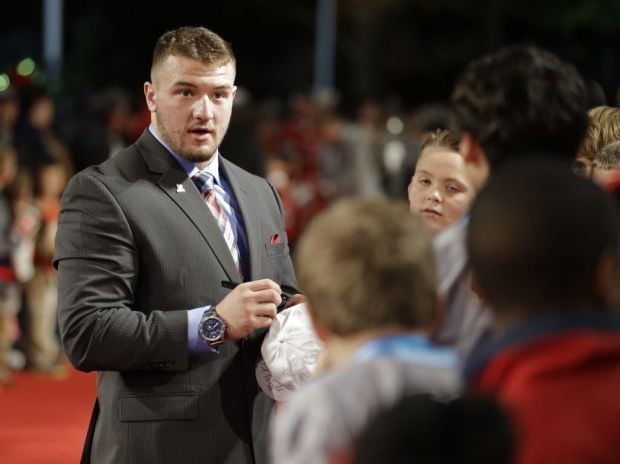 Scooby Wright tore the lateral meniscus in his left knee during the UA’s season opener against UTSA, then injured his foot against UCLA three weeks later. The All-America linebacker has just eight tackles to his name, a year after winning a number of national awards.

During his 11 combined weeks on Arizona’s injury report, Scooby Wright took up boxing, found a way to distract himself on game days and got even bigger, if that’s possible.

Along the way, Arizona’s All-America linebacker discovered his “why.” It’s the reason he has endured surgery, a grueling rehabilitation and heart-wrenching losses.

Wright will spend Thanksgiving at the home of his parents in Windsor, California. The Wrights will “have a big family dinner with everybody,” he said, watch some football, catch up and — yes — talk about the future.

There are still more questions than answers, Wright told the Star in a phone interview this week. The linebacker says he has yet to decide whether he’ll leave school a year early for a shot at the NFL, or whether the lateral meniscus tear suffered in Week 1 and the foot injury three weeks later have changed his future plans.

Wright is certain of one thing, though.

The impending return will be a boost for Arizona, which is down to sixth-string “Mike” linebacker after injuries to Wright, Cody Ippolito, Haden Gregory, Tre Tyler and Jake Matthews. The 6-6 Wildcats won’t learn their bowl destination until Dec. 6; their options range from staying at home for the Dec. 29 Arizona Bowl to, possibly, a Christmas Eve Hawaii Bowl.

A comeback would mean the world to Wright, too, who needs football like most people need water.

Wright was a cult hero in 2014, registering 163 tackles, 29 tackles-for-loss, 14 sacks and six forced fumbles. He won the Nagurski, Bednarik and Lombardi awards and was a fringe candidate for this year’s Heisman Trophy.

However, injuries have limited Wright to just eight tackles over parts of two games.

“It’s hard on him” not to play, coach Rich Rodriguez told the Star on Tuesday. “It’s hard for Scooby — or any player of his caliber — to stand and watch.”

The Star talked to Wright this week about his injury, projected return and NFL draft chances. Here’s what he said, in his own words:

On what he’s learned while injured: “Just how to handle adversity, to be honest with you. You’ve got to take it head-on, and make sure you move forward. Remember the ‘why,’ and have fun while you’re going through everything. (Injuries) are just part of the game.”

On how he stayed sane without football: “I started doing a lot of boxing when I got hurt, just to get (my) cardio up. It kept me levelheaded. … I was on the verge of — I was going a little crazy for a little bit, but my parents always made sure I was staying positive. They’ve always been there, and they checked up on me a lot.”

On what he did during games: “For the most part, I was watching the offensive linemen’s tendencies and how they reacted in certain situations. That’s basically what me and Cody Ippolito did. We got pretty good at it. Me and him were calling out plays.”

On Arizona’s rash of injuries: “When Cody got hurt, and then I got hurt and then (Derrick) Turituri

got hurt, we thought, ‘What’s going on?’ We thought we’d have to get a priest to come bless the linebackers in the film room. I’m happy with the way we handled stuff this year as a position group. We didn’t say, ‘Why us?’”

On how he’s improved: “I’m definitely a lot stronger. I’m the strongest I’ve ever been, and I’m excited about that. During practice — I couldn’t practice — I’d go work out in the weight room. I got great-quality workouts: On Tuesday, I’d go for a good hour, or an hour and 10 minutes. One Wednesday and Thursday, I’d do about 45 minutes. I worked out usually six or seven days a week.”

On his injured knee and foot: “After I was able to get some stability in my foot, I started squatting again. The first time I started squatting, I could barely do 135 (pounds) on the bar. Following my knee rehab, it got stronger. This past Thursday, I did 500 for a set of six. It feels … not normal. It feels better than normal.”

On what he’s learned this season: “It’s surreal how fast things can go from very good — a Pac-12 South championship, Pac-12 defensive player of the year, all that — to very bad. It’s a reminder to stay humble, because it can be taken from you. I learned that — well, I didn’t learn that, because you already know that. I realized that.”

On whether he plans to declare for the NFL draft: “I haven’t decided what I’m doing next year or anything like that. I’m healthy and ready to go.”

Photos: Scooby Wright through the years

Watch: Scooby says he will play in Arizona's bowl game

Arizona linebacker Scooby Wright III (33) gets his knee iced down on the sidelines just before the start of the second quarter against UTSA at Arizona Stadium, Thursday Sept. 3, 2015, Tucson, Ariz. Kelly Presnell / Arizona Daily Star

Scooby Wright tore the lateral meniscus in his left knee during the UA’s season opener against UTSA, then injured his foot against UCLA three weeks later. The All-America linebacker has just eight tackles to his name, a year after winning a number of national awards.