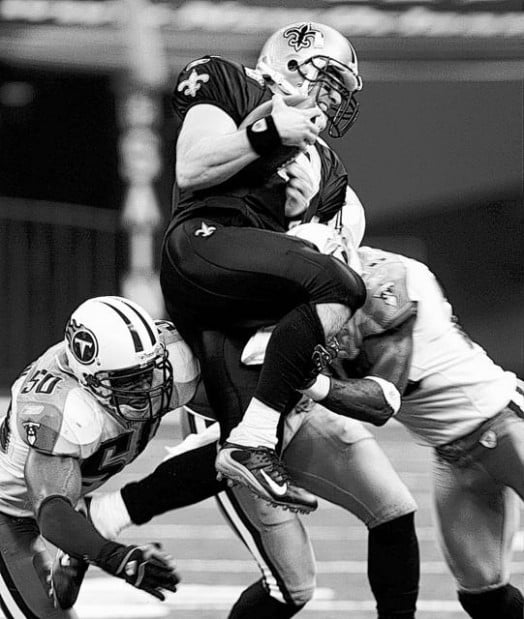 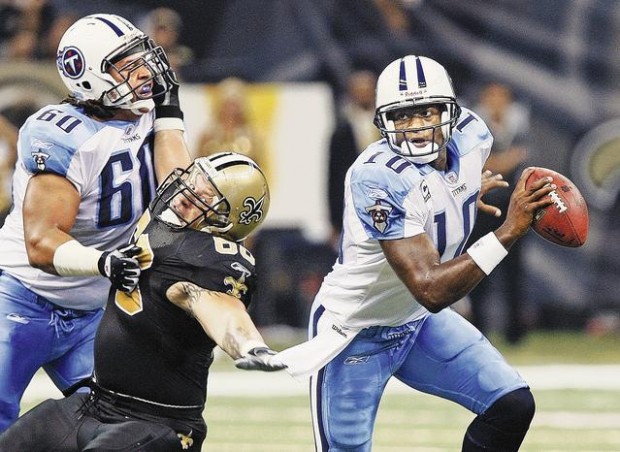 By Paul Newberry The Associated Press

Young threw a pair of touchdown passes, and the Tennessee Titans kept New Orleans winless, beating the Saints 31-14 Monday night before a Superdome crowd that showered boos on the same players who provided such a pick-me-up to the devastated city a year ago.

The Saints (0-3) rallied from an early 10-0 deficit, going ahead 14-10 midway through the third quarter on Bush's second touchdown run.

But Young, just as he did leading Texas to an epic win over Bush and Southern Cal at the 2006 Rose Bowl, brought his team back.

While running backs LenDale White and Chris Brown handled the bulk of the workload on the go-ahead drive, Young threaded a key 10-yard pass to Eric Moulds, who was shoved out of bounds at the Saints 1. White, a teammate of Bush's at USC, powered over on the next play to put the Titans (2-1) ahead to stay.

Young was not reliving the Rose Bowl. He was building off last season's strong finish, when the Titans rallied to go 8-8 — just missing the playoffs — after starting 0-5.

"I'm tired of it," Young said of the continuing comparisons to Bush. "A lot of people keep trying to make this a rivalry between me and Reggie. I have so much respect for the guy because of what he does."

Young even phoned Bush during the week for tickets.

"He came through for me," Young said. "That was a good deal by Reg. I appreciate that."

Drew Brees, who had another miserable game, got the ball knocked away on the first play of the fourth quarter, the second of his five turnovers. Young seized on the fumble to drive Tennessee to the decisive score.

Young completed an 18-yard pass to Roydell Williams, ran for 11 yards and capped the drive with a 3-yard pass to Bo Scaife that put the Titans up 24-14.

Young also hooked up with Brandon Jones on a 35-yard TD and finished off an efficient performance 14 of 22 for 164 yards. For good measure, he ran three times for 23 yards.

"This is a tough one," Saints coach Sean Payton said. "It's obviously time to be concerned."

Although Bush scored both TDs for the Saints, the Tennessee defense kept him bottled up for the most part. He was held to 15 yards on seven carries and managed 20 yards on six receptions, the quick stutter-step that froze so many defenders a year ago is no longer working.

"Obviously it's not the same as last year," Bush said. "We started 3-0 last year. Obviously things are not going right for us right now. We're just not playing good football. We've got a lot of work to do."

No one has more work to do than Brees, who led the NFL in passing yards last season but can't seem to do anything right now. He threw a career-worst four interceptions — three of them picked off by Keith Bulluck, who had never had more than one in a game. Vince Fuller returned the other 61 yards for a touchdown with his first career pick.

Brees now has seven interceptions, against one touchdown pass.

Earlier in the week, Bulluck referred to himself as "Mr. Monday Night." He certainly lived up to the title.

"I feel if you can't get it done on Monday Night Football, you'll never be able to get it done," the linebacker said. "I backed it up."

Even with all the interceptions, Brees' fumble was the most devastating turnover. The Saints were still in the game and had driven into Tennessee territory, but Travis LaBoy knocked the ball away with a blindside hit, and Randy Starks recovered for the Titans at midfield.

"The momentum shifted from there," Brees said. "We never got it back."

As if another loss wasn't bad enough, New Orleans running back Deuce McAllister went out with a knee injury in the first half. Payton declined to say how serious it might be.