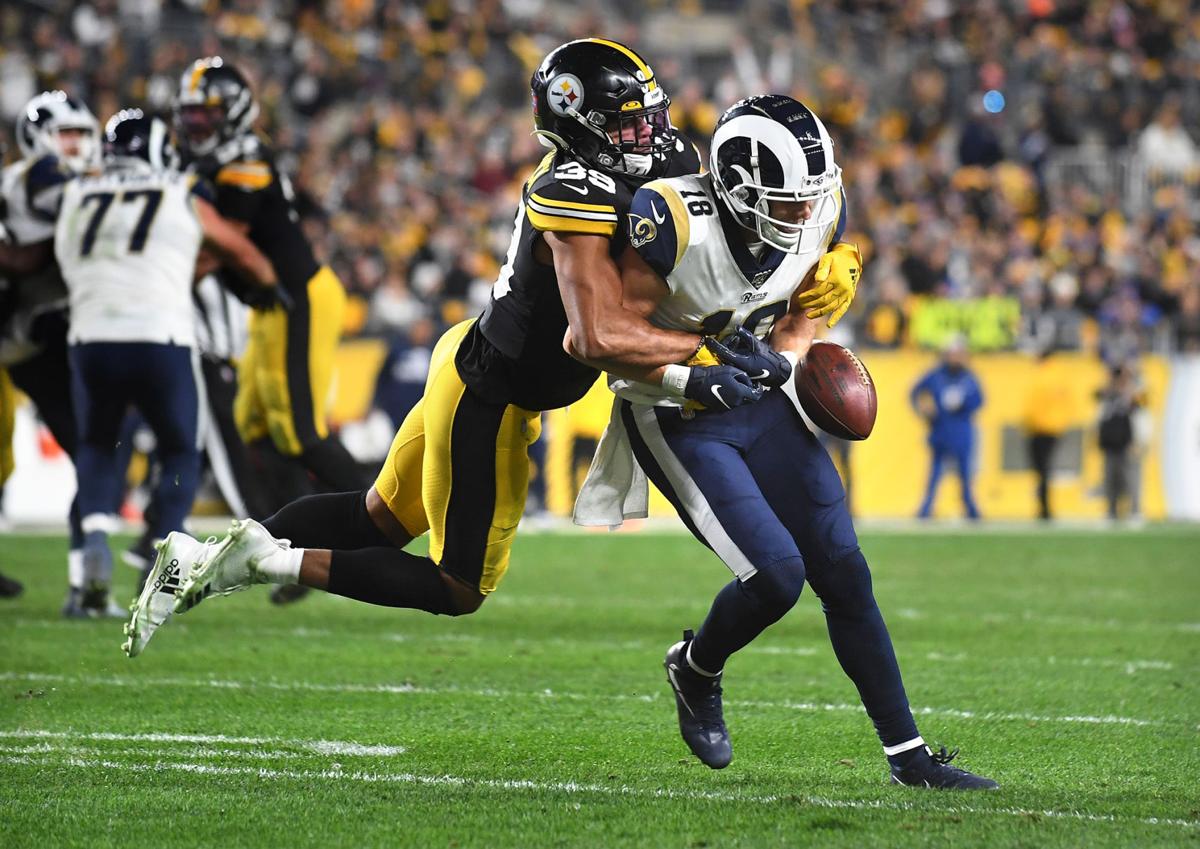 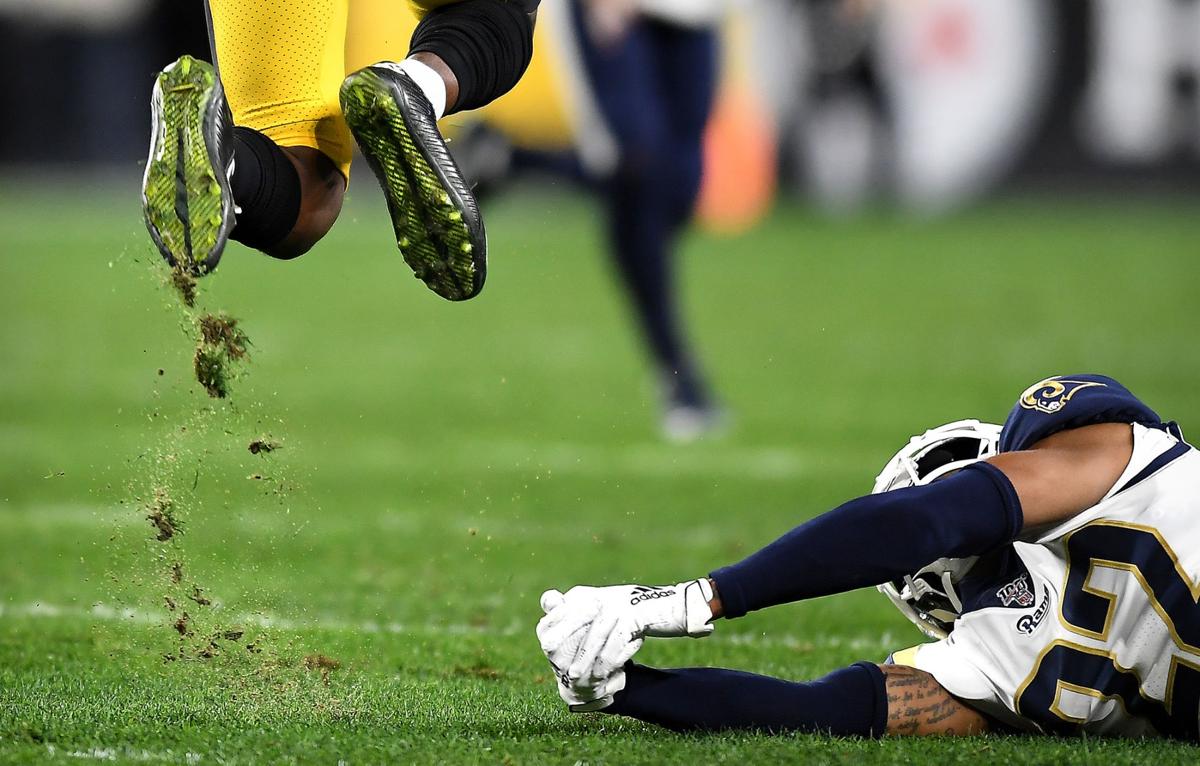 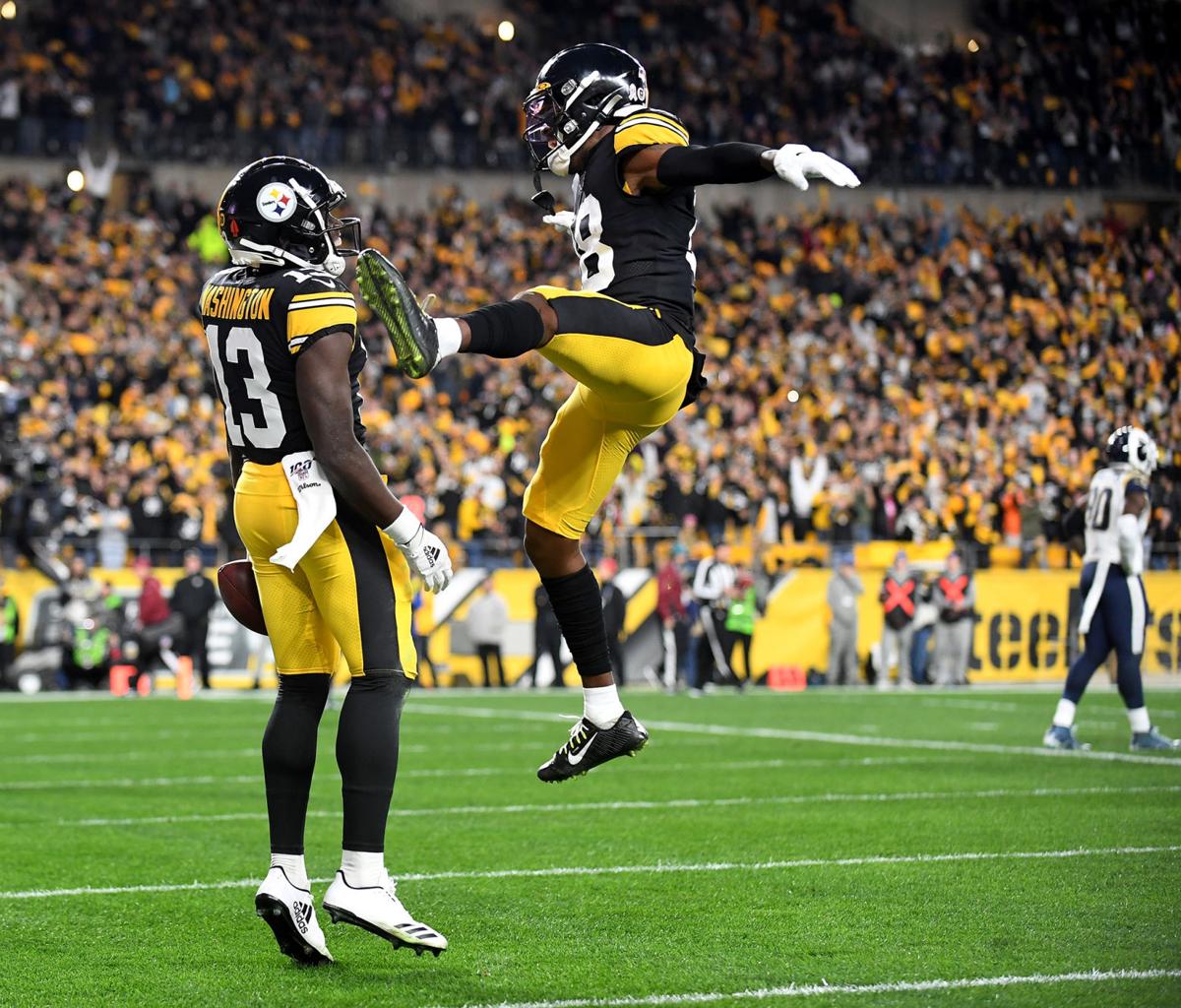 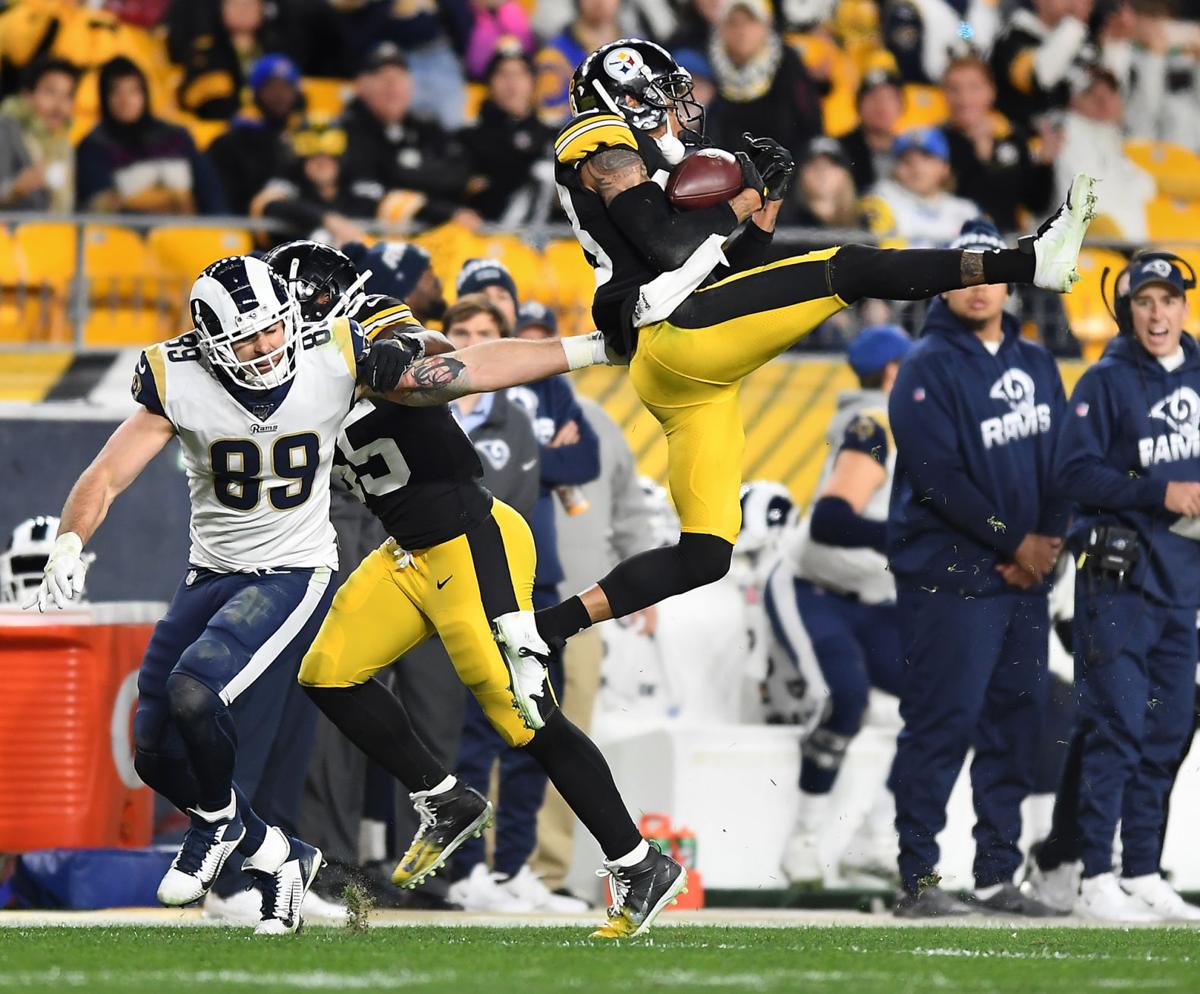 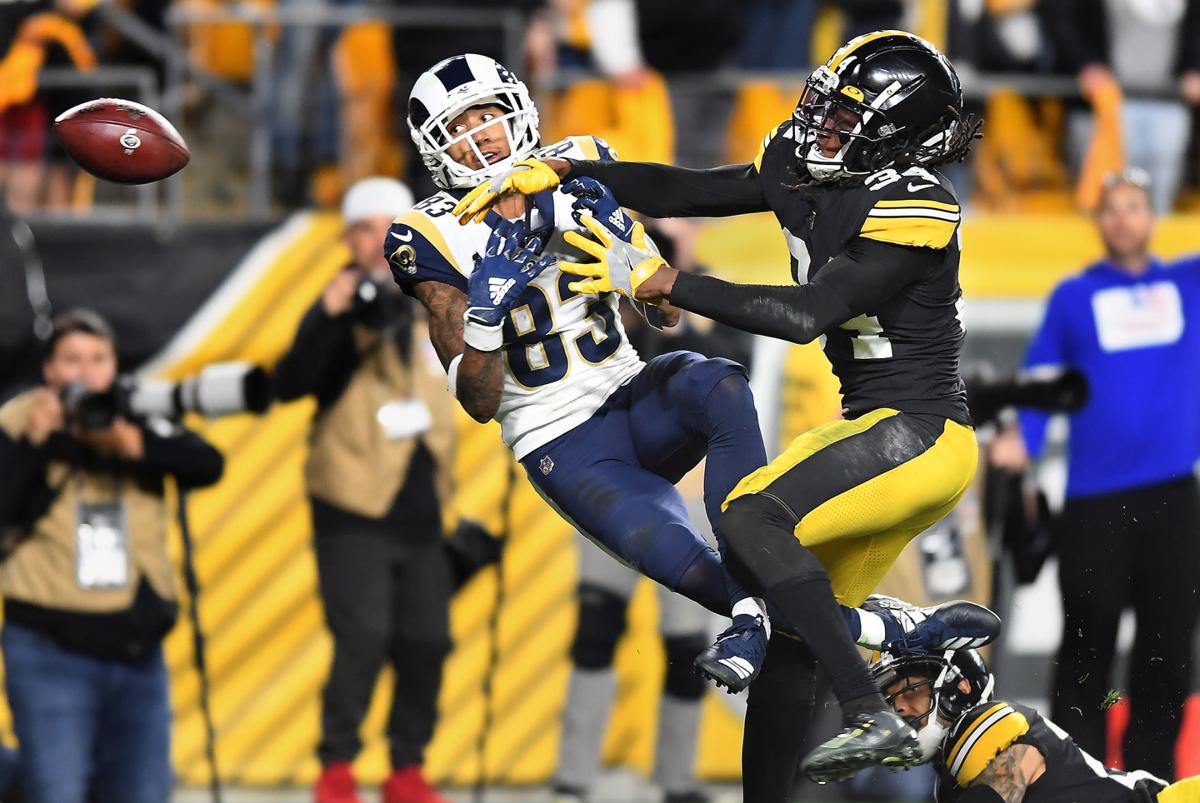 Los Angeles Rams receiver Josh Reynolds has the ball knocked away in the end zone on fourth down late in the fourth quarter against the Pittsburgh Steelers on Sunday, Nov. 10, 2019 at Heinz Field in Pittsburgh, Pa. (Wally Skalij/Los Angeles Times/TNS) 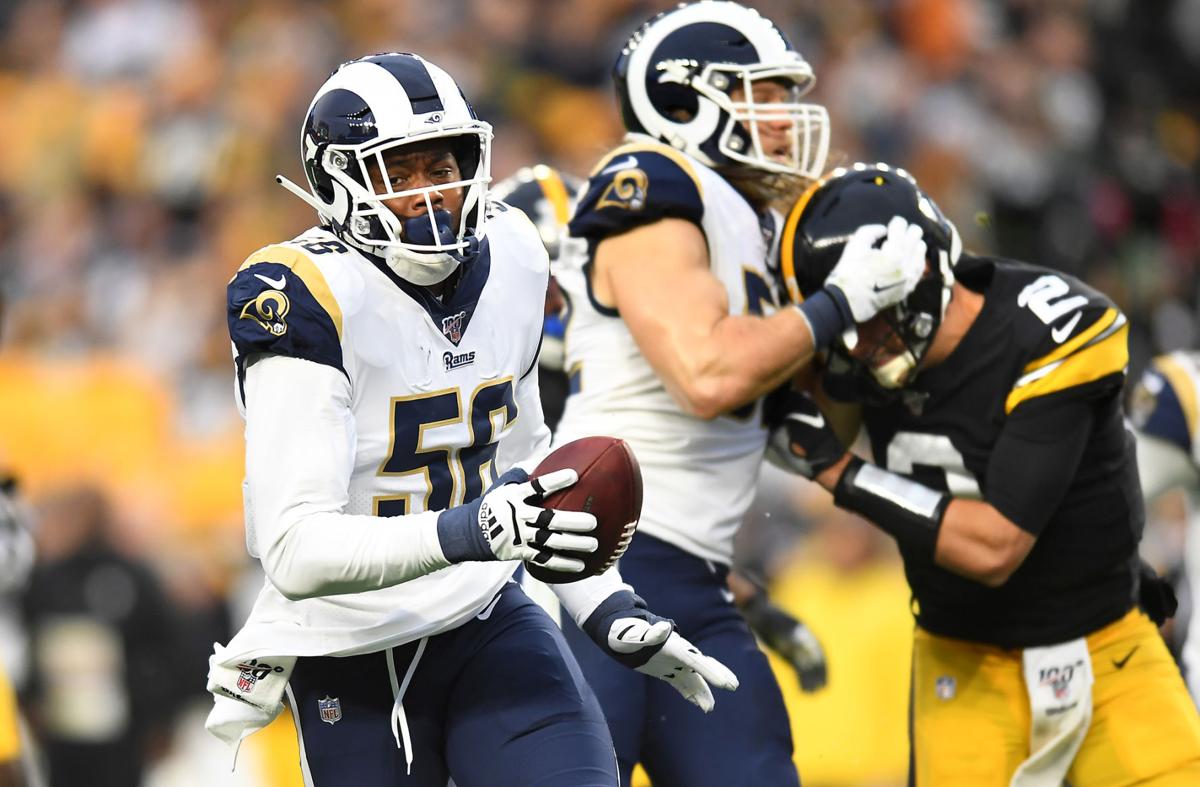 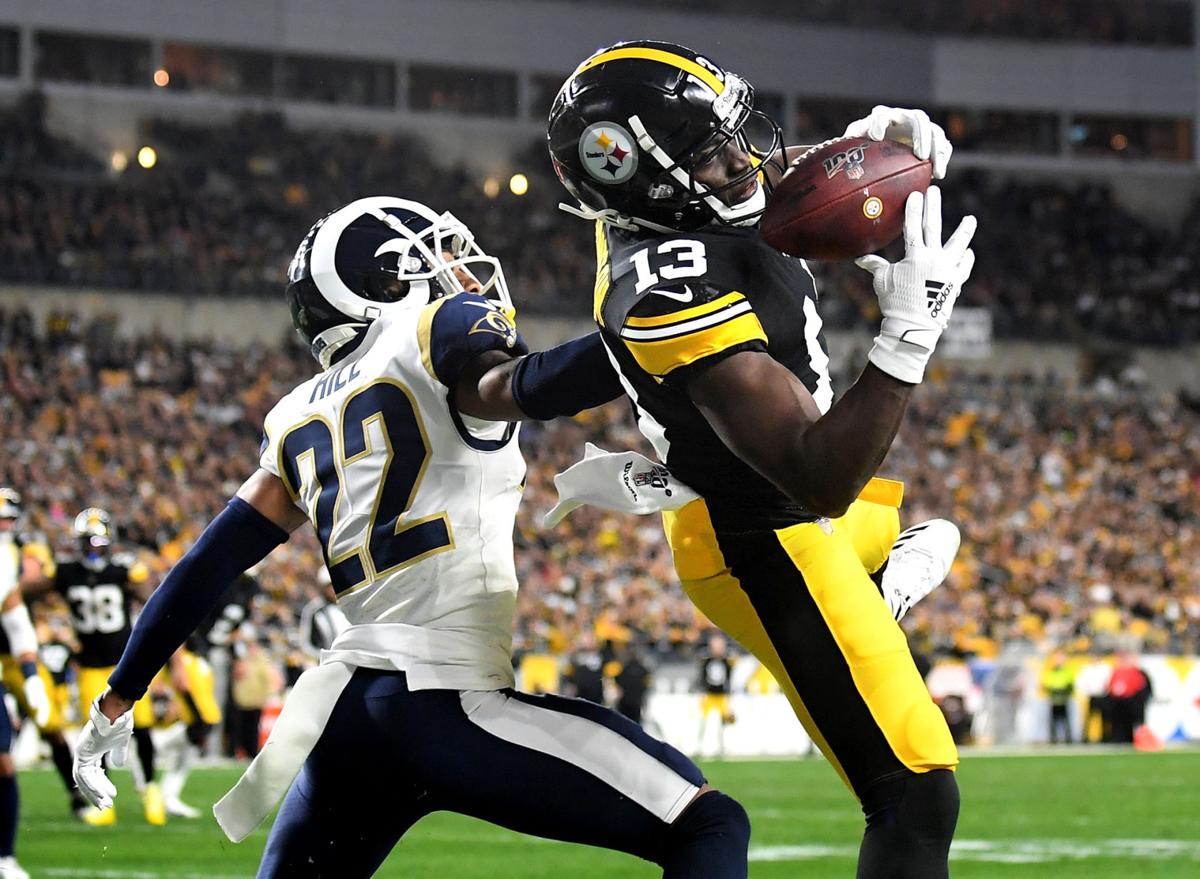 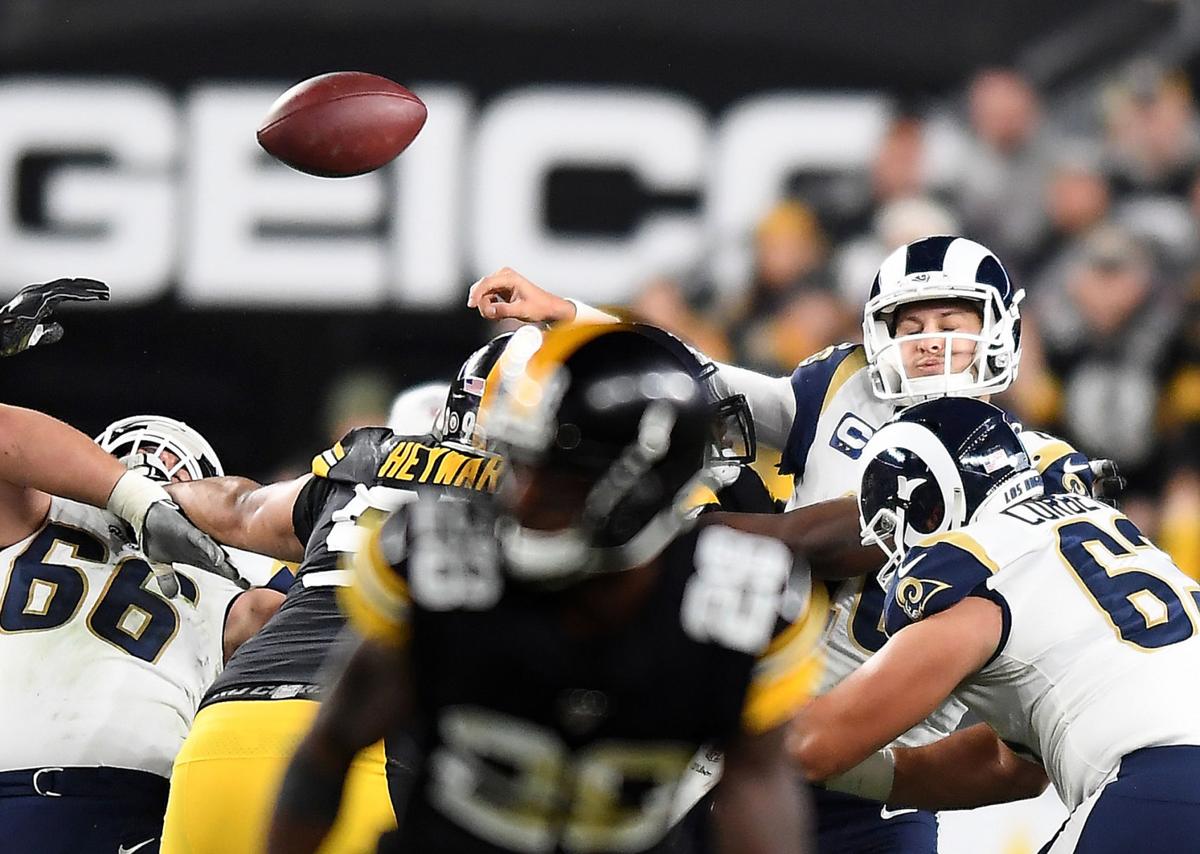 Los Angeles Rams quarterback Jared Goff fumbles the ball as he is hit by a Pittsburgh Steelers defender on Sunday, Nov. 10, 2019 at Heinz Field in Pittsburgh, Pa. The Steelers scored a touchdown on the play. (Wally Skalij/Los Angeles Times/TNS)

PITTSBURGH - The Pittsburgh Steelers paid homage Sunday to the winners of Super Bowl XIV, with thousands of fans cheering their aging heroes who shuffled onto Heinz Field at halftime.

They brought back their Super Bowl LIII offense.

That team that mustered three points against the New England Patriots in February made an unwelcome return at the most inopportune of times.

With their season all but hanging in the balance, the Rams - among the NFL's most explosive offensive teams since 2017 - had a field goal and squandered a defensive effort that included a fumble return for a touchdown and a safety.

The Rams' offense has gone 18 consecutive possessions without reaching the end zone.

Foundational cracks have formed in this team, starting with the revolving door of an offensive line, which, for instance, has cycled through six players at left guard. Those might be anonymous hulks up front, but when that chain snaps, so does the rest of the offense.

"That's a lot, especially when you're on the road," tackle Andrew Whitworth said. "You're changing the mechanisms of how you do things, how you snap the ball, who tells the center it's time to snap it, who looks back, that's changed.

"But the reality is, you find a way. It's NFL football. Nobody feels sorry for you. We've got some guys down, and are possibly going to be down for a little bit, and we're going to have to find out who can play, who's ready to play, and go forward."

The path ahead isn't pretty. The Rams have lost four of six games, and their two victories in that stretch came against Atlanta and Cincinnati, teams that are a combined 2-16.

Coming up, they have home games against Chicago and Baltimore, both of whom can make life tough on quarterbacks. The Rams play Arizona twice in their final five games, but also have a stretch against Seattle, Dallas and San Francisco that would seriously challenge a team that was actually on a roll.

If this Pittsburgh game was a measuring stick, the Steelers cracked it over the Rams' heads, especially with the unseasoned Mason Rudolph at quarterback and star running back James Conner watching in street clothes. It was a game the Rams should have won.

The Rams' Jared Goff, who wasn't sacked the last two games, was taken down four times Sunday and hit several more. The Rams punted eight times, had four turnovers and one turnover on downs.

Pittsburgh didn't give up a third- or fourth-down conversion in the first half, something the smothering Steelers hadn't achieved in two years.

"I think anytime you're one for 13 on third downs, you're never going to give yourself a chance to stay on the field," said coach Sean McVay, whose team was actually one for 14. "We had some self-inflicted wounds, some penalties. I think it was a collaboration of everybody can be better, and we have to go back and look at the tape."

Alternatively, they could burn it. And they might want to once they catch a glimpse of safety Minkah Fitzpatrick's touchdown against them. What appeared to be an incomplete pass by Goff was ruled a fumble and Fitzpatrick scooped up the loose ball and returned it for a 43-yard touchdown.

"Once I see a replay, I'll let you know," Goff said when asked about the play, "but it felt like I threw it."

Even more vexing to some Rams, a similar play by Rudolph later in the game was ruled an incompletion and not a fumble.

Rams receiver Cooper Kupp, who came into Week 10 averaging seven catches per game, was shut out in that department - four targets, zero receptions.

"They did a really good job," Kupp said of the Steelers. "On any given play, you aren't always going to get the exact look you want. You're going to have to be able to solve problems. As an offense, it's on all of us to find a way to create space, get open and make a play.

"At the end of the day, we just have to execute."

For the Rams, the end of the day could be far sooner than they'd hoped.

Want to know who won Super Bowl 11? The final score and the Most Valuable Player? How many times have the Patriots made the big game? Our Super Bowl database is here to help.

Mike McCarthy's way: A look at the new Cowboy coach

Mike McCarthy Way was Bourbon Street with a curfew.

Chad Johnson says he's trying out as a kicker in XFL. He also hopes to make NFL return, too.

Who will Bears sign as Mitch Trubisky's backup? Breaking down the quarterback market.

Ryan Pace has left no uncertainty about his Plan A for the Bears quarterback situation in 2020. The sixth-year general manager wants to see through his draft pick of Mitch Trubisky, whose inconsistency and regression in 2019 pulled the team backward.

Los Angeles Rams receiver Josh Reynolds has the ball knocked away in the end zone on fourth down late in the fourth quarter against the Pittsburgh Steelers on Sunday, Nov. 10, 2019 at Heinz Field in Pittsburgh, Pa. (Wally Skalij/Los Angeles Times/TNS)

Los Angeles Rams quarterback Jared Goff fumbles the ball as he is hit by a Pittsburgh Steelers defender on Sunday, Nov. 10, 2019 at Heinz Field in Pittsburgh, Pa. The Steelers scored a touchdown on the play. (Wally Skalij/Los Angeles Times/TNS)