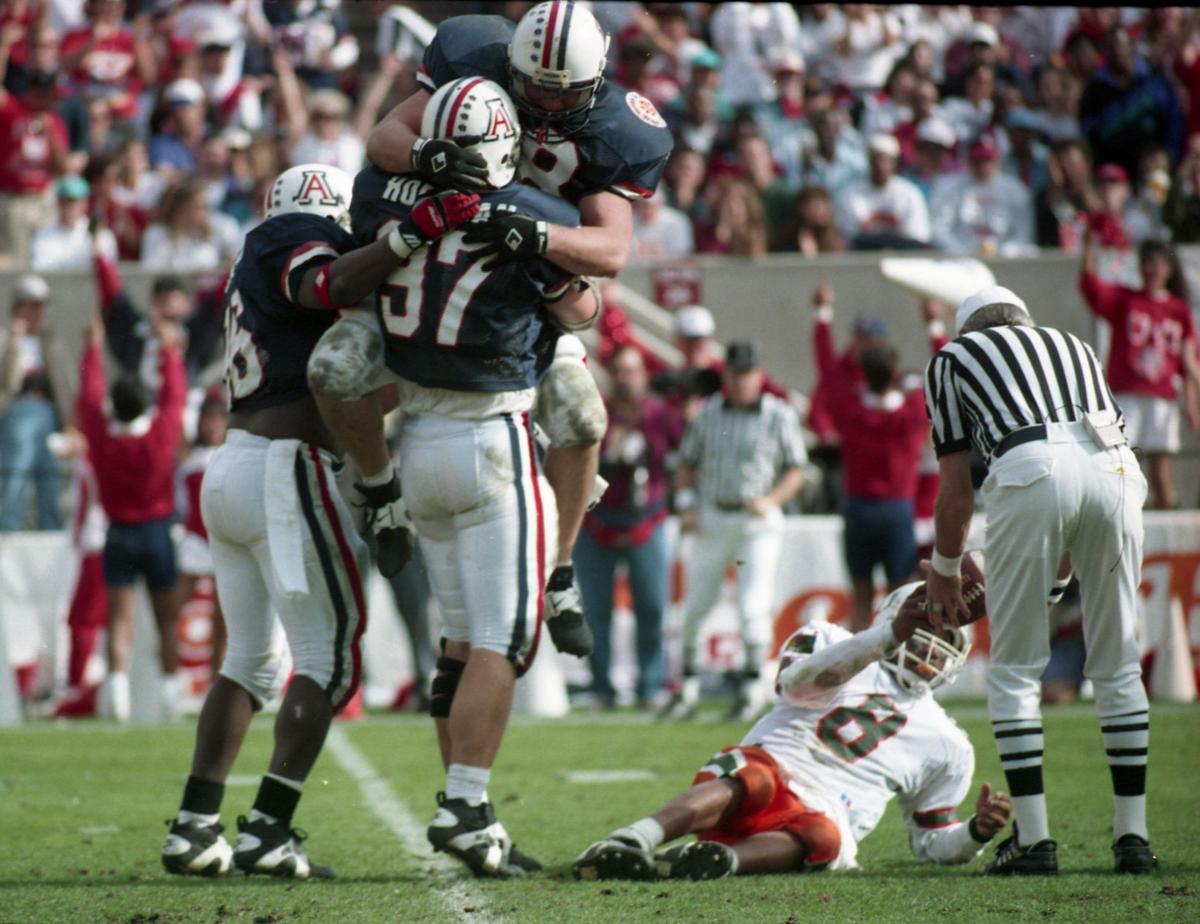 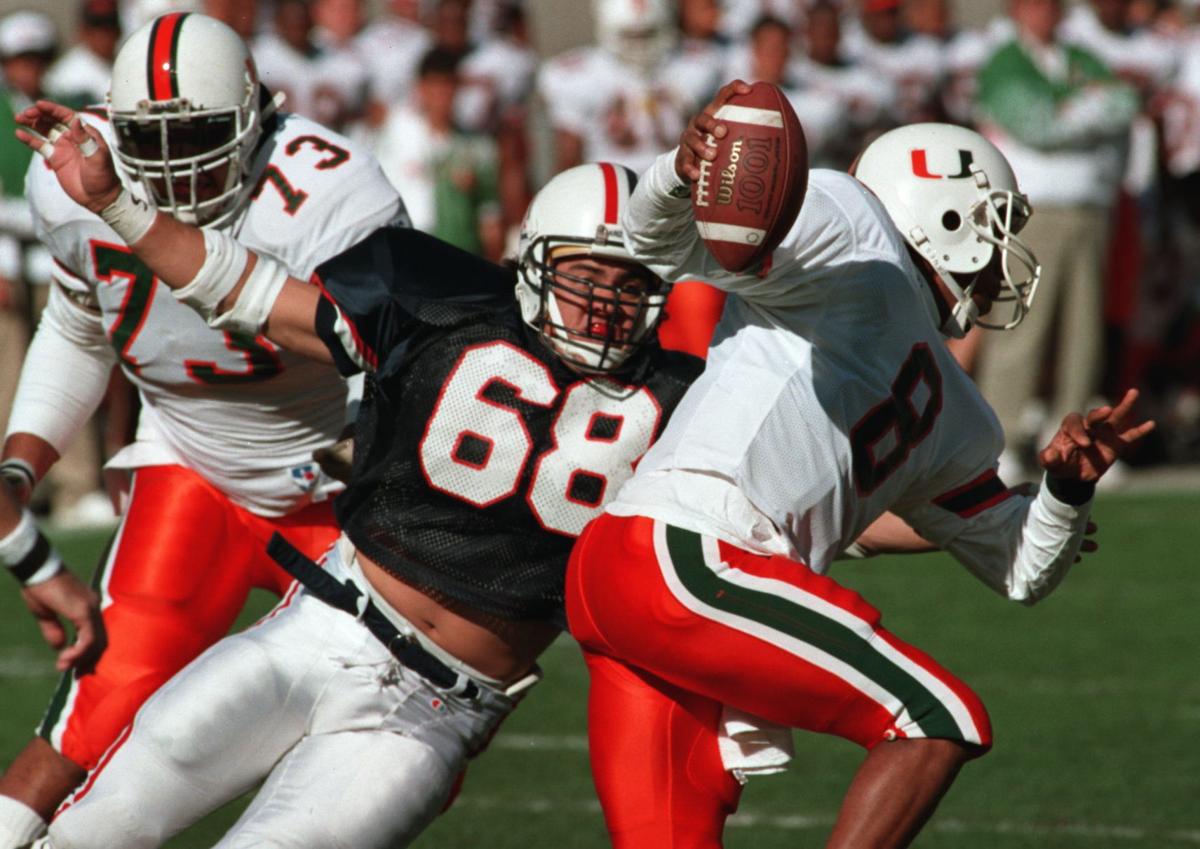 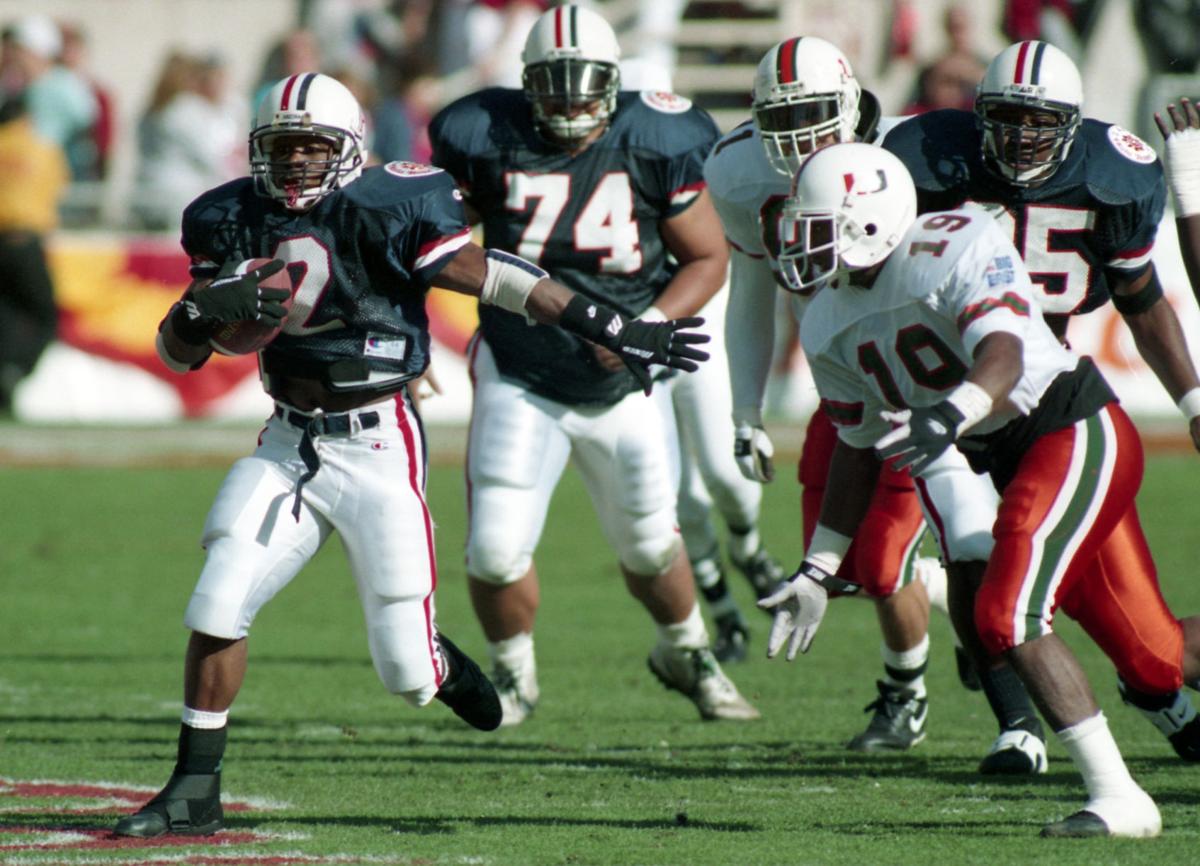 Arizona running back Ontiwaun Carter breaks from Miami defenders during the 1994 Fiesta Bowl in Tempe, Ariz. 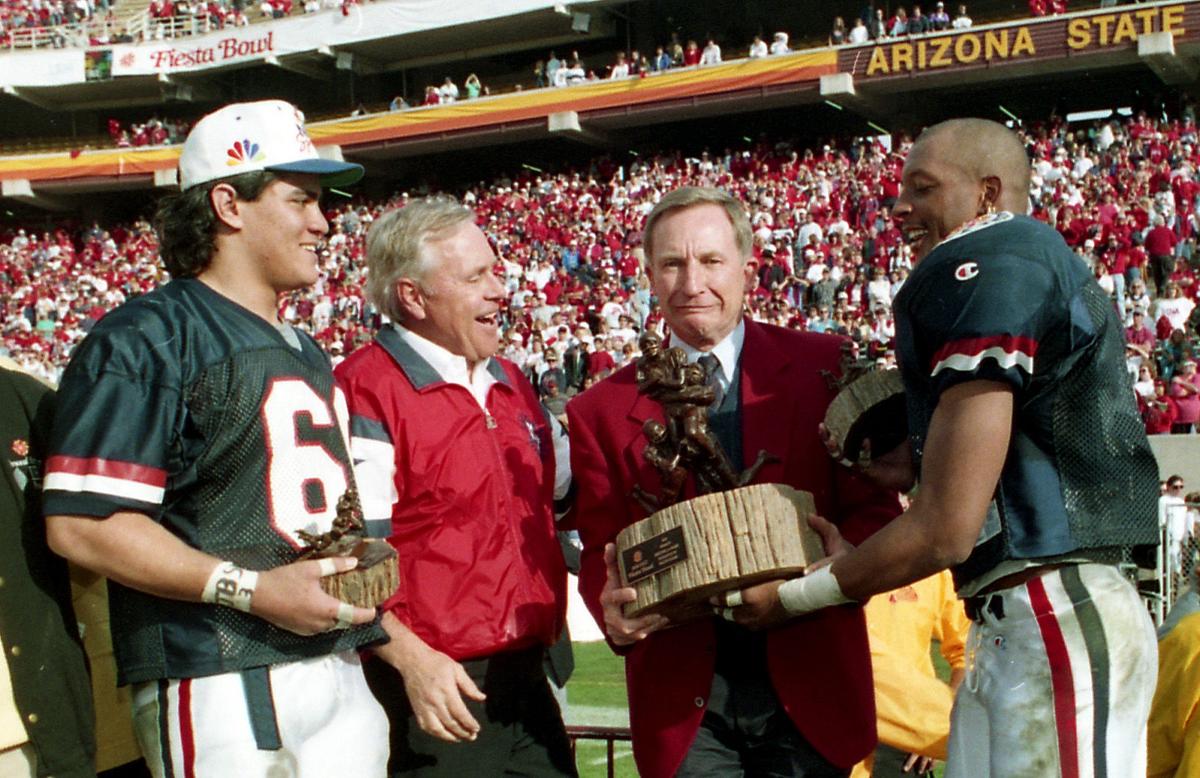 Dick Tomey moved back to Tucson this spring and the first time I saw him he asked why I recently wrote Arizona has never won the Pac-12 championship.

I didn’t have an answer he liked.

In 1993, Arizona, USC and UCLA tied for the league title at 6-2. There was no clear winner; Arizona routed the Trojans 38-7 but lost to the Bruins 37-17 on a day the Wildcats played without injured quarterback Dan White.

UCLA was awarded the Rose Bowl, a tiebreaker berth, by beating USC 27-21.

But after the bowls were played, after Arizona impressively pummeled No. 9 Miami in the Fiesta Bowl, the Wildcats were ranked No. 10 in the final AP poll; the Bruins were No. 18 after losing to Wisconsin in the Rose Bowl.

The UA athletic department erected a sign — PAC-10 CO-CHAMPS, 1993 — that has been on display at Arizona Stadium for 23 years.

Arizona was so good in the Fiesta Bowl, dealing the Hurricanes their first shutout loss since 1979, never allowing the ’Canes inside the 40 yard-line, that you wondered how any team beat the ’93 Desert Swarm.

“They kicked the living tar out of us,” said Miami coach Dennis Erickson.

But Tomey, whose teams came within a whisker of Rose Bowl berths in 1992, 1993, 1994 and 1998, and whose program had the league’s second best winning percentage in the 1990s, insists that the banner at Arizona Stadium reflects a championship season.

There would have been no confusion had Arizona been able to close out Cal on that November afternoon in Berkeley. The Wildcats led 20-0 at half and regained possession with four minutes remaining, protecting a 20-17 lead.

In what is possibly the most damaging play in more than 100 years of UA football, a short pass to receiver Terry Vaughn bounced off his hands into those of Cal cornerback Eric Zomalt.

Unfortunately, Zomalt caught the ball in stride and ran without opposition 35 yards down the sideline. Touchdown.

Cal won 24-20 even though the Wildcats had a first-down at the Cal 19 with a minute remaining. Two passes in the end zone were incomplete.

Thus, the Wildcats went to the Fiesta Bowl and made the best of it.

Finishing 10-2 was the first time Arizona won 10 games in a season. Humbling the nationally-recognized Hurricanes further strengthened Desert Swarm’s reputation. In addition, it help ease the bitterness of a 1992 loss to the No. 1 Hurricanes at the Orange Bowl; a missed 51-yard field goal attempt on the game’s final play allowed Miami to escape with an 8-7 victory.

In retrospect, those three Desert Swarm seasons, 1992-94, are the most celebrated in school history. Winning the Fiesta Bowl was the exclamation point.

“We physically took it to them,” said Boyer, a linebacker. “It wasn’t close.”

UA junior Chuck Levy, an All-Pac-10 kick returner who played tailback, quarterback and receiver, put the game on ice when he bolted 68 yards for a touchdown in the second quarter. Levy ran up the middle, broke to his right, juked two Miami defensive players and, whoosh, was gone.

It remains one of the most scintillating plays in school history.

“We came here with a lot to prove,” said Levy, who bypassed his senior year and was a second-round NFL draft pick. “We proved we’re as good as anybody.”

Where are they now: Tailback Ontiwaun Carter, who gained a team-high 837 yards, is now the CEO and head pastor at International Restorer of the Breach Ministries in Las Vegas.

Bouie, who was a consensus All-American safety in 1994, is the former executive director of the Arizona Lottery.

How they did it: “When the DBs were walking out for pre-game warmups, (Miami) told us they thought the Desert Swarm was just a joke, that it was just print,” said Sanders, now the athletic director at football coach at Pueblo High School.

“But you can’t see our speed on film. You have to come out and play, and by then it’s too late. They were like, ‘These guys are really fast.’ They got a taste of us last year, but a lot of us went to work over the summer and we just got better.”

Watch: Phillips, Fuimaono say Wildcats will step up, fight in 2016

Arizona running back Ontiwaun Carter breaks from Miami defenders during the 1994 Fiesta Bowl in Tempe, Ariz.