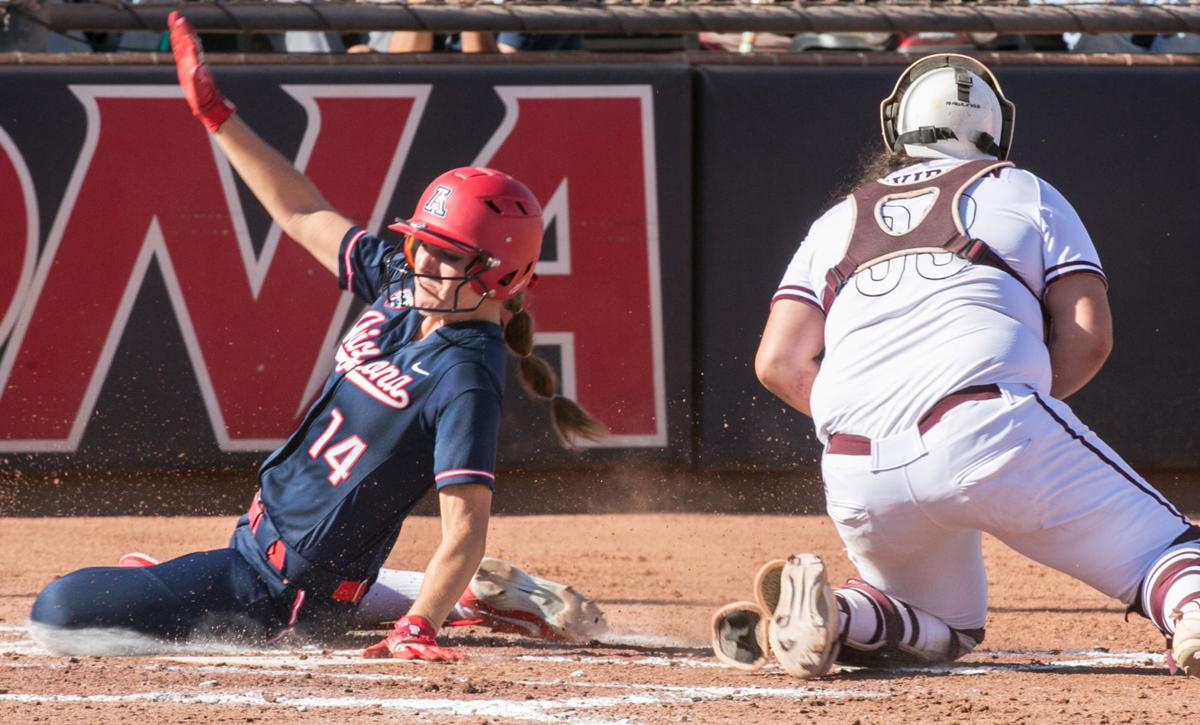 Arizona’s Ivy Davis finds her way around catcher Mia Davidson to score one of the Wildcats’ three runs in the second inning of their victory over visiting Mississippi State. 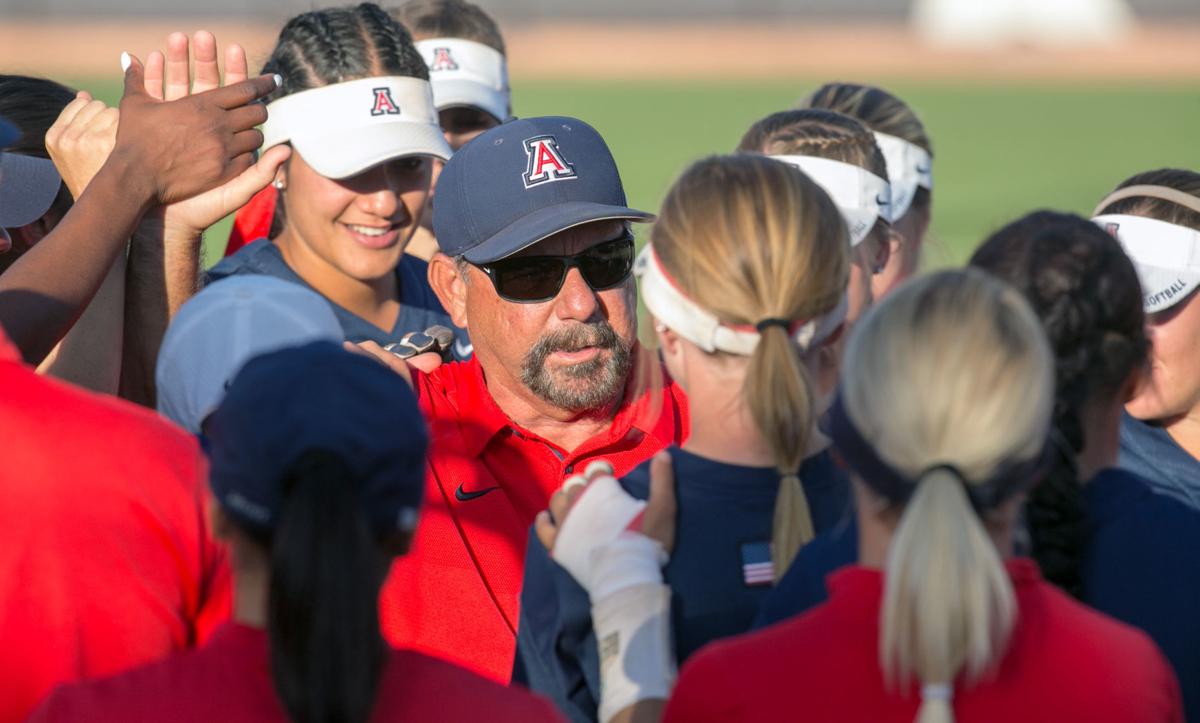 “It was a wonderful day,” said UA coach Mike Candrea of his team’s last home game before Hillenbrand gets a face lift.

In the attempt to be No. 1, Mike Candrea started his No. 2 pitcher in Sunday’s NCAA regional final.

This wasn’t a February freebie against Montana or Cal State Northridge, it was elimination Sunday at Hillenbrand Stadium.

But if there’s anyone in college softball who has earned trust the last 30 years — anyone whose impulses, gut reactions and sixth sense have stood the test of time — it is Candrea.

He is, after all, the alpha and omega of college softball coaches, John Wooden in shorts, with eight national championships and an Olympic gold medal to back up his decision to keep Arizona ace Taylor McQuillin on the bench at the start of Sunday’s showdown with MSU.

I mean, when Candrea and Mississippi State coach Vann Stuedeman met with NCAA officials last week for a briefing on the week’s schedule, Stuedeman was intimidated.

If you want to question Candrea’s decision, that’s your business. He inserted McQuillin in the bottom of the second inning, trailing 3-2, and after that the Bulldogs had no hits. McQuillin was as lights-out as any of the pitching immortals who stood on the mound at old Rita Hillenbrand Stadium — Susie Parra, Nancy Evans, Jennie Finch, Taryne Mowatt.

“Coach has a plan and he knows what he’s doing,” said McQuillin.

Sunday’s game was not one of those easily forgettable afternoons en route to the Super Regionals or Women’s College World Series when the UA was rolling and barely stopped to recognize the logo on the opposing pitcher’s jersey.

It was labor. Arizona hasn’t gone to the World Series since 2010 and last year lost a stunning Super Regional final to Baylor that ended in a flood of tears.

Now Arizona appreciates every step of the journey, and on Sunday, believe it or not, Candrea was moved to tears, as was MSU’s Stuedeman.

Tears are usually reserved for something further down the softball road, but this was a special weekend for both teams at the “Rita.”

Rita Hillenbrand Stadium, bless its soul, was for 20 years the Wrigley Field of college softball. In 1993, Arizona paid $1.6 million to become the first NCAA softball team to build what Candrea refers to as an “eye-popping” stadium.

Arizona became the envy of college softball and, predictably, SEC schools endowed by endless football riches soon built bigger and better softball stadiums and, finally, so did the University of Nike, Oregon, which has won five of the last six Pac-12 championships and replaced Arizona as the Arizona of West Coast softball.

Sunday was the last game played at the “old Rita.” When Arizona returns to action in February of 2019, it will do so in an $8 million makeover that will actually provide shade and comfort for thousands of UA fans who for years sat through games such as the Arizona-Mississippi State showdown in mega-heat and on hot tin benches.

Even Candrea said he had to run to the bathroom Sunday and stand in line with Joe Fan.

Mississippi State’s Stuedeman referred to it as softball’s version of Yankee Stadium and said she was proud “we were a small part of a big history; it’s very cool.”

Candrea is an emotional guy. That’s probably the Italian in him. He dismissed his starting pitching decision with a simple “it didn’t quite go as I drew it up” and then confessed he got emotional in the post-game celebration.

“Old Rita has been good to us,” he said. “One of the great things about getting older is that you get to live the history, and I’ve been able to do that in this program.”

History? In the 2007 NCAA regionals at Rita, Arizona and Mississippi State met for the first time. It was May 19, 2007, and everything was so different.

The Wildcats beat MSU on a four-hit shutout by Mowatt, and went on to win a second straight national championship.

It seemed like the good times would never end for Arizona softball. No one could’ve guessed it would be the last of Candrea’s eight championships.

How much has changed? Fox is now the head coach at UNLV. Balko is married to a former NFL football player and works as a UA fundraiser. Acton married two-time baseball All-Star J.J. Hardy, now retired. Mesa works in the mortgage business in San Francisco.

But Lowe and Mowatt have returned to the dugout, as Candrea’s two leading assistant coaches, both trying to restore Arizona to its lost glory.

“It was a wonderful day,” said Candrea. “It gives you one more week to get to that final goal.”

Study: Tucson is the 4th most affordable city for college students

Off-campus housing prices are cheaper in Tucson than most of the country.

In the photo, the 81-year-old McCain and his wife sit in wood chairs near a creek and their dog rests at the couple's feet.

A small dog named Lovely who Tucson police say was doused with gasoline and set afire along with part of a house earlier this month has died, …

Reports of coyote being aggressive toward cyclists along The Loop

As the Cats prepare for the Super Regional at UCLA, watch what Mike Candre and the Wildcats had to say.

UA adds its second commit of the 2019 class, the first from Arizona.

Greg Hansen: UA-UCLA showdown the latest chapter in 'one of the biggest rivalries'

UCLA’s softball operation was once so feared that the Bruins’ historically dominant pitcher was named Doom.

Historically, Arizona-UCLA could be considered the softball version of the Duke-North Carolina basketball rivalry.

Over the next five weeks, Star columnist Greg Hansen will be profiling 10 Tucsonans making a difference. Up first: Randolph Golf Complex's Andrew Wack.

Arizona’s Ivy Davis finds her way around catcher Mia Davidson to score one of the Wildcats’ three runs in the second inning of their victory over visiting Mississippi State.

“It was a wonderful day,” said UA coach Mike Candrea of his team’s last home game before Hillenbrand gets a face lift.