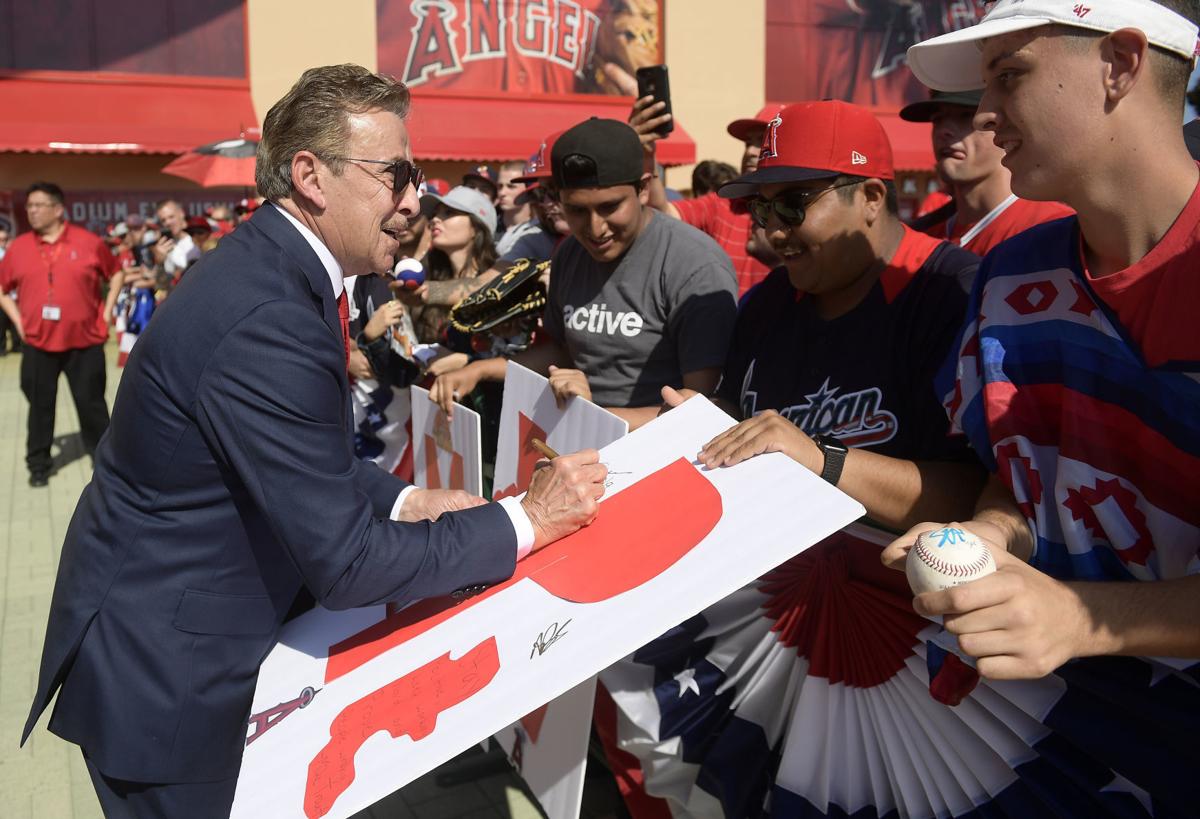 Tucson native Arte Moreno, left, made a fortune in outdoor advertising and used it to buy the Los Angeles Angels from the Walt Disney Co. for $184 million. His ballclub is now worth $1.9 billion, according to Forbes. 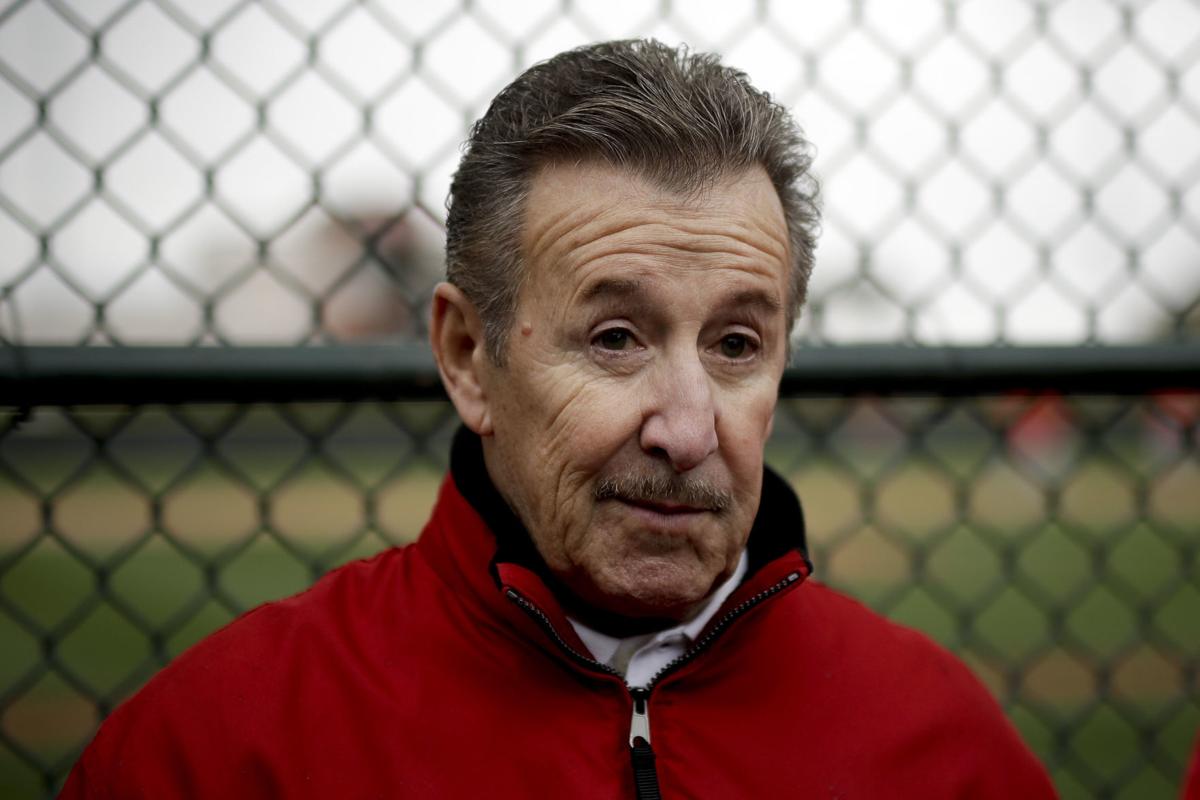 Arte Moreno attended Tucson and Rincon high schools and went to the UA. Sunday, he’ll be inducted into the Pima County Sports Hall of Fame.

A moment or two before tipoff last winter at ASU’s Wells Fargo Arena, Sean Miller caught the eye of an Arizona fan sitting in the middle of Sun Devils fans. Miller walked behind the bench, climbed a few stairs and shook the hand of Arte Moreno.

Have you ever seen a coach, especially one as private and intense as Miller, do that before tipoff or kickoff or the first pitch of a baseball game?

It was a reminder that Arte Moreno is a very important man in Tucson — even though he hasn’t lived here since 1974, even though none of the sports facilities at the UA carry his name, and even though he never suited up for the uber-talented Tucson High Badgers of the early 1960s.

A week or so ago, Moreno got a message from Tucson attorney Mike Aboud, a key figure of Tucson High’s undefeated 1962 state basketball championship team. Aboud wanted to know if Moreno would be able to attend Sunday’s induction ceremonies for the Pima County Sports Hall of Fame.

“I’ll be there,” said Moreno. “I’m very flattered that I got selected.”

This is a man who is on the Board of Directors of the baseball Hall of Fame in Cooperstown, New York, a man who recently gave Los Angeles Angels outfielder Mike Trout a $435 million contract, a man who used to jump on his bicycle, slide his baseball mitt on the handlebars and ride to Hi Corbett Field to watch Willie Mays .

Flattered to be selected to his hometown sports Hall of Fame? It shows how deep Moreno’s connection to Tucson remains after all this time.

A few years ago, Moreno got to meet Hall of Famer Larry Doby, the first black baseball player in the American League.

“I grew up watching you,” Moreno told Doby. “My dad would always take me to spring training games to watch the Cleveland Indians.”

“Are you from Tucson?” Doby asked.

The two men, one the owner of the Los Angeles Angels, the other a revered figure in baseball history, talked about the good old days in Tucson.

“Larry teared up,” Moreno says now. “It was pretty special.”

There have been a lot of special times since Moreno returned from a year in Vietnam, enrolled at the UA and, he says, “set goals and really concentrated on school. I used the GI Bill to go to school. It worked.”

The oldest of 10 children born to Arturo and Mary Moreno — his father was a printer in the family-operated El Tucsonense Spanish-speaking newspaper; his mother’s family was from Chihuahua — Arte grew up on Tucson sports.

He sat in the end zone at Arizona Stadium as part of the Knothole Club — “I’m still waiting for that Rose Bowl,” he says with a laugh. He would ride his bike to campus to watch Frank Sancet coach one College World Series baseball team after another. He would sit with his father in the living room of their modest Tucson home listening to the radio night after night, Vin Scully with the Dodgers and Harry Caray with the Cardinals.

Moreno became close friends with UA football coaches Dick Tomey and Larry Smith, and through those channels got to know Arizona All-Pac-10 football players Dana Wells and David Wood, both of whom he hired for key administrative positions in his Outdoor Systems Inc., the firm that provided capital to become one of the initial partners in the Arizona Diamondbacks and, in 2003, purchase the Angels from the Walt Disney Co.

“I grew up a Yankees fan, how about that?” he admits. “I knew the lineup by heart. Bobby Richardson. Elston Howard. Yogi and Whitey. The M&M boys of 1961 — Mantle and Maris — were a powerful attraction. The Yankees were on TV almost every Saturday and I watched all of it. My dad and I read the box scores in the newspaper. When I was a partner in the Diamondbacks and they beat the Yankees on a broken-bat single in the 2001 World Series, all my buddies called me a traitor.”

It hasn’t all been big names and fancy places, either. He coached his son’s baseball teams from T-ball to high school.

“I tell people that this life in baseball has been the American Dream,” Moreno says.

A few days ago, Moreno studied the list of inductees on the Pima County Sports Hall of Fame website. So many of the names brought back good memories: Tucson Toros general manager Jack Donovan, with whom Moreno bought the minor-league Salt Lake Trappers in the 1980s, a franchise that would set a baseball record with 29 straight victories; Ray Kosanke, “Big Ko,” Moreno’s schoolmate, a 6-foot-9-inch center of Tucson High’s 21-0 championship basketball team of ’62; and, of course, Karl Eller.

“I wasn’t lucky enough to be a baseball star, but I’ve been very fortunate,” Moreno says. “This is more than a business to me. It’s a lifetime love affair.”

A Q&A with the Wildcats' all-time winningest coach ahead of Thursday night's game against Oregon.

How negative-yardage plays have hurt the Arizona Wildcats offense, especially on third down

Cats Stats: The UA offense has slumped of late, in part because of a rise in sacks allowed, which has impacted the unit’s productivity and functionality.

Here's what's been affecting the Cardinal, who host Arizona on Saturday afternoon.

Center calls positive test "an unintentional mistake," saying he "put something in my body that I was completely unaware of."

'Mr. Football' on Stanford's empty stadium, the Cats and Cardinal's shared DNA — and a score prediction

The Star's Greg Hansen checks in ahead of Saturday afternoon's game between the UA and Stanford.

Tucson native Arte Moreno, left, made a fortune in outdoor advertising and used it to buy the Los Angeles Angels from the Walt Disney Co. for $184 million. His ballclub is now worth $1.9 billion, according to Forbes.

Arte Moreno attended Tucson and Rincon high schools and went to the UA. Sunday, he’ll be inducted into the Pima County Sports Hall of Fame.