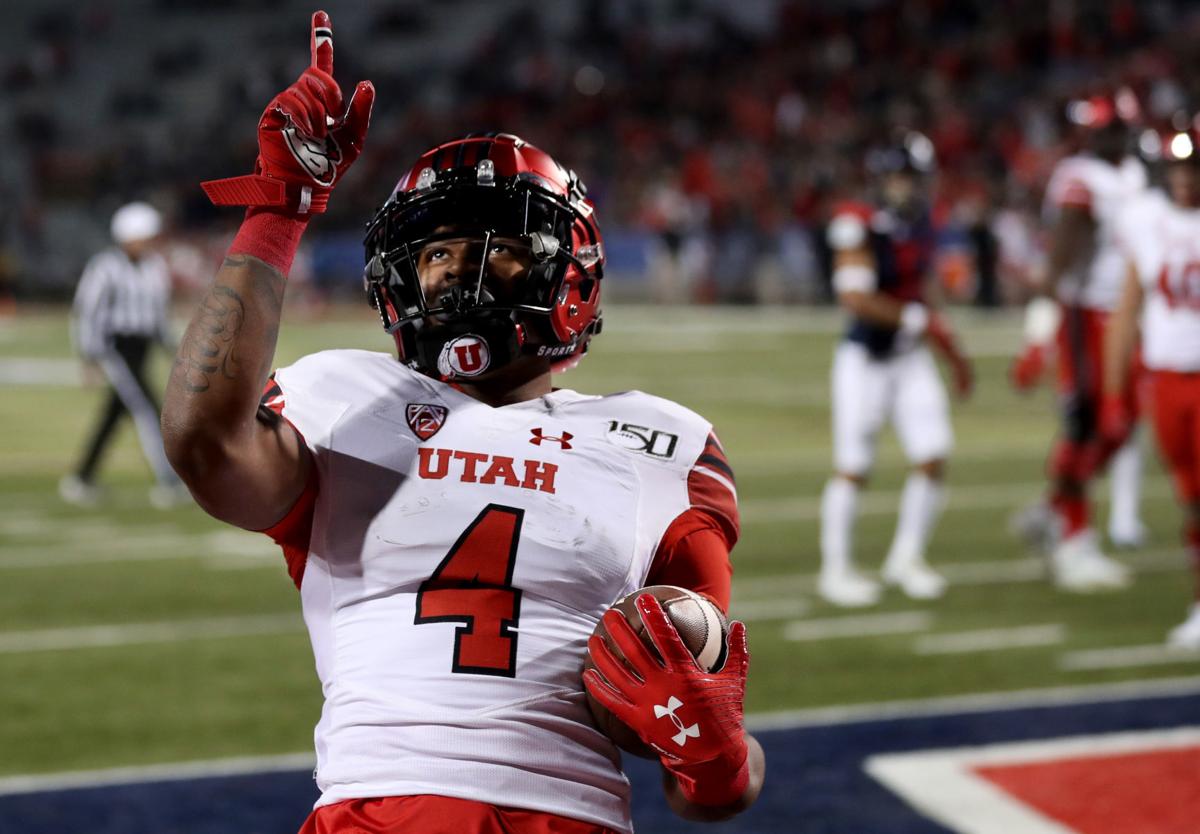 Utah running back TJ Green (4) gestures skyward after walking in a touchdown untouched late in the fourth quarter against Arizona at Arizona Stadium, Tucson, Ariz., Nov. 23, 2019.

Arizona running back J.J. Taylor (21) gets surrounded by Utes on kick off return in the third quarter against Utah at Arizona Stadium, Tucson, Ariz., Nov. 23, 2019.

It was 52 degrees at halftime Saturday night and Utah coach Kyle Whittingham did not make any adjustments for the weather. He wore a muscle-accentuating, short-sleeve black shirt to fit his team’s tough-guy identity.

It seemed to be Whittingham’s way of saying ‘‘bring it.’’

The Utes’ vanilla game plan was to hand the ball to tailback Zack Moss and let him run between the tackles. It was football from the 1960s. Moss would gain eight yards, then six, then seven, then five, then eight again. Arizona could do nothing but backpedal.

For Arizona it was No Mas.

The Utes won 35-7 and when the game ended at 11:18 p.m., Whittingham wore neither a smile nor a jacket. The coach and his football team were all business. They left the shivering to Arizona’s football constituency, which knows all too well what it feels like to be left out in the cold.

The Wildcats have established two records this season — the lowest average home attendance, 39,538, since 1975; and the number of assistant coaches fired in midseason, three.

You can look it up. Type “dysfunctional’’ into your Google window and it will lead you to a photograph of the Lowell-Stevens Football Facility.

When Kevin Sumlin was hired, the absolute strength of Arizona’s football program was its quarterbacking. Now it is a weakness. If Khalil Tate made one mistake in the offseason it was not jumping into the NCAA’s well-trafficked “transfer portal’’ and moving to where someone knew how to take advantage of his improvisational skills.

In Sumlin’s system, Tate morphed into a dink-and-dump-off QB, completing a head-shaking transformation from the most-feared QB in the Pac-12 to a second-stringer on Senior Night.

College football coaches have dozens of bonus clauses in their contracts, paid extra for, say, qualifying for a bowl game or leading the league in total offense. Shouldn’t there also be a clause that says a coach has to give money back when his team goes in the tank?

As it turns out, Sumlin and his coaching staff got figuratively nothing of Tate’s senior season except victories over a few fellow bottom-feeders.

Arizona has scored 13 points the last two weeks. One touchdown. That’s historically bad, especially for a coach whose reputation once was as an offensive guru. The last time Arizona scored fewer than 13 points in back-to-back conference games was a few weeks after John Mackovic was fired in 2003.

Mackovic was said to be a guru, too.

A few weeks ago Arizona athletic director Dave Heeke emailed a lengthy survey to season ticket holders asking them, among other things, why they don’t attend more football games. The UA announced that 35,911 attended Saturday’s game, but it was probably closer to 28,000.

Welcome to No Show U.

Heeke listed 23 possible reasons why fans have dropped away. He wanted to know if this year’s worst average attendance in 45 years is because:

• The deteriorating condition of Arizona Stadium;

• The cost of tickets

• Preference to watch on TV

The only variable Heeke didn’t include was the team’s lack of engagement with the community. That starts with Sumlin, whose two seasons at Arizona have at times appeared as if he’s a guest coach.

He’s been as vanilla as Utah’s offense was Saturday night.

Sumlin’s contract stipulates that the school would have to pay him $10 million if he is fired this season. And while that figure comes off as preposterous, you wonder if it’ll cost the school more money to keep this coaching staff for another season.

Imagine the unrealized revenue from gate receipts, donor contributions and damage to the identity, brand and reputation of UA football. Isn’t that potentially more than a $10 million payoff?

The future of football at Arizona is as grim as at any time since the mid 1950s. And it hasn’t yet hit bottom. The Territorial Cup, anyone?

There have been some notable coaching misses in the Pac-12. Paul Hackett at USC, Keith Gilbertson at Washington, Tommy Holmoe at Cal and Mackovic at Arizona. It once seemed impossible for anyone to inch close to that territory, but Sumlin is knocking on the door.

Arizona hired Sumlin after he failed at Texas A&M, which gave him $10 million to leave the premises. He was then hired by Arizona, which promised him another $10 million if he failed here.

Incredibly, he’d almost get paid more if he is fired now, $10 million, than if he coaches the next three years, at $3.5 million per year.

Sure he wants to win, but to what degree? Sumlin has discovered the possibility that he could be paid $20 million not to work anywhere. Is America a great country, or what?

When you’ve got that kind of a financial parachute, what incentive is there to go the extra mile, work harder, be more creative and leave it all on the field?

If you’re going to win at Arizona, all of those Boy Scouts mottos apply.

Arizona Wildcats are no match for No. 7 Utah in 35-7 drubbing

Roadrunners score twice in four minutes, crawl back for 3-2 home win over Ontario

Tucson improves to 14-4 with second win in as many nights.

Notes, quotes and stats from the Arizona Wildcats’ 35-7 loss to No. 7 Utah

Pertinent factoids, words and numbers from the Cats' setback against the Utes.

The Star's exclusive, in-depth look back at the Cats' setback against the Utes.

The Indoor Football League grew by one Monday morning after the IFL announced it will add another team for the 2020 season. This time, the IFL…

Utah running back TJ Green (4) gestures skyward after walking in a touchdown untouched late in the fourth quarter against Arizona at Arizona Stadium, Tucson, Ariz., Nov. 23, 2019.

Arizona running back J.J. Taylor (21) gets surrounded by Utes on kick off return in the third quarter against Utah at Arizona Stadium, Tucson, Ariz., Nov. 23, 2019.