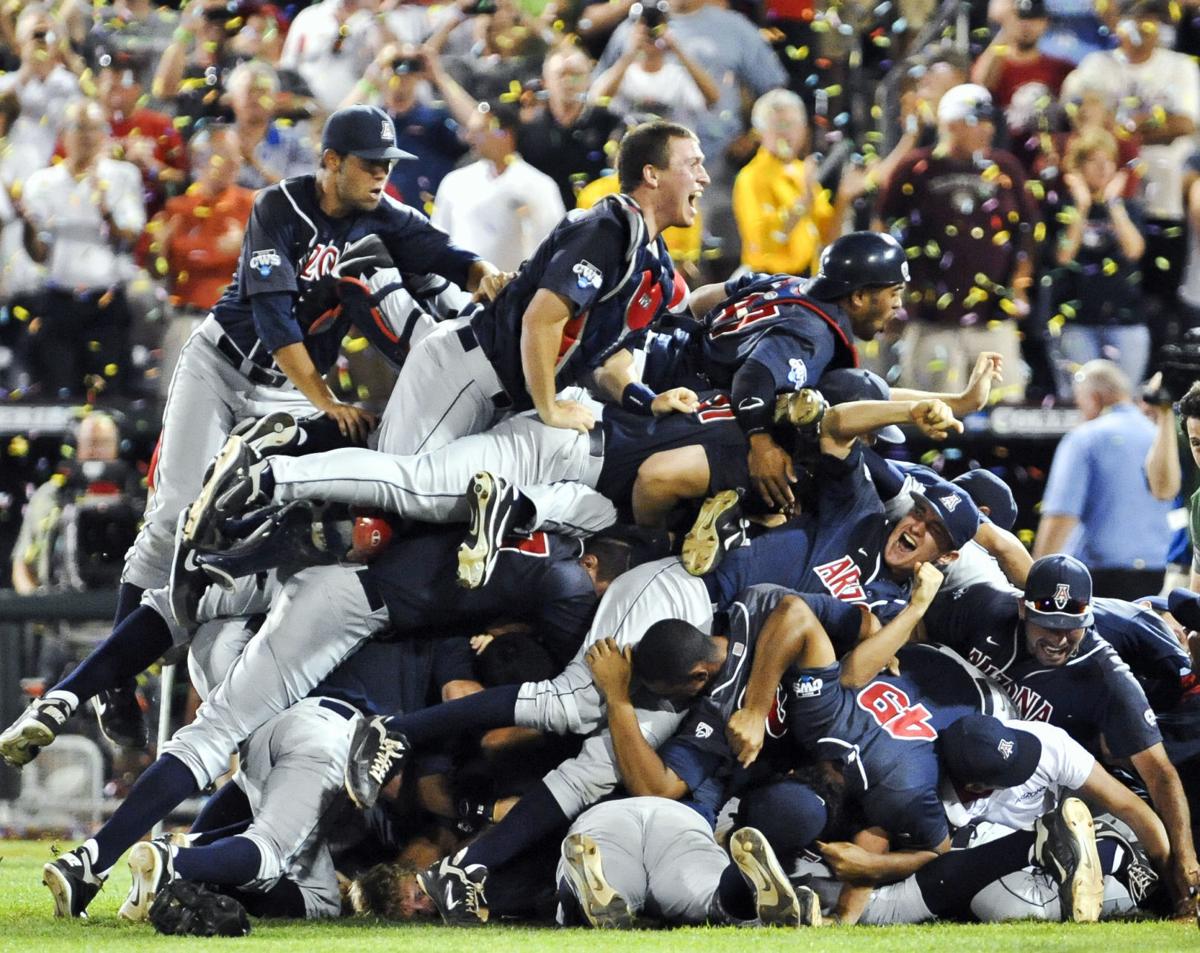 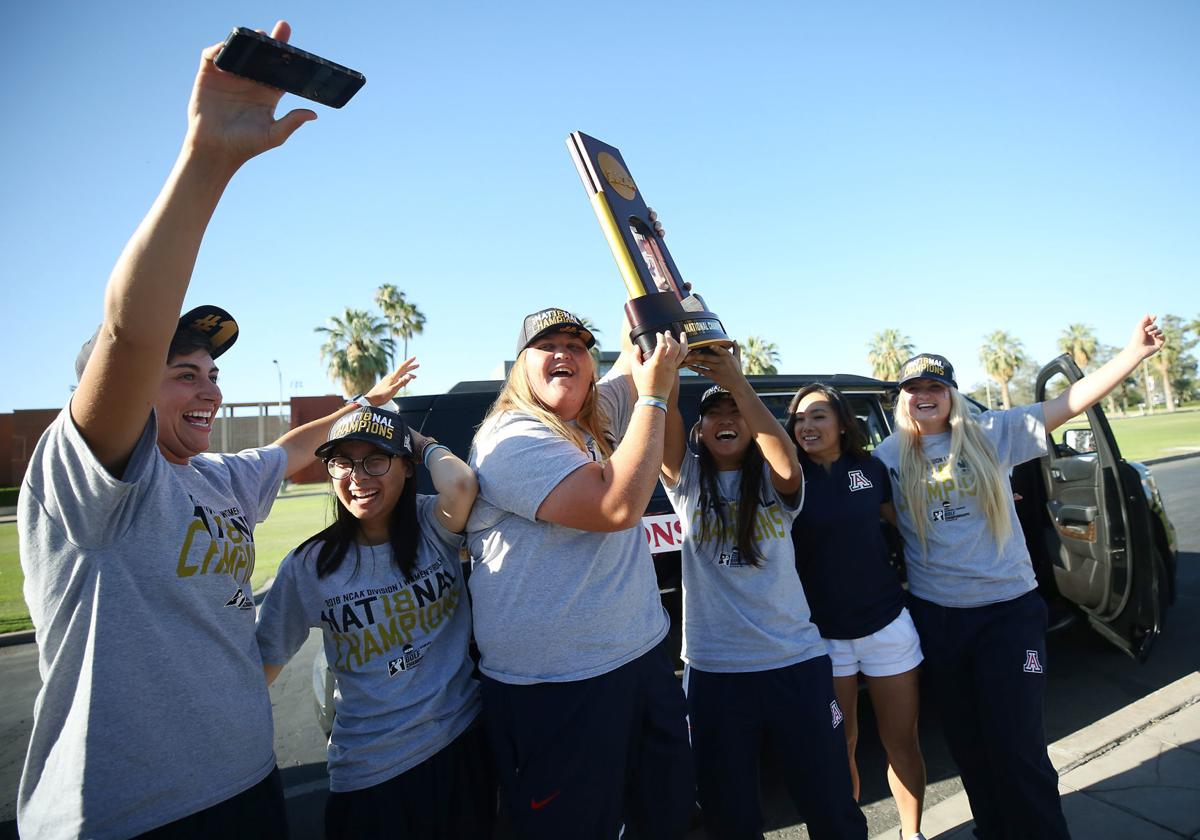 The UA women’s golf team of 2018 beat No. 1 UCLA, No. 5 Stanford and No. 2 Alabama at the NCAA Championships to bring home the title.

Any list or ranking of Tucson’s Game of the Decade, 2010-19, would surely include two Arizona baseball victories completed less than 48 hours apart.

Naturally, both were victories over Arizona State. Both were bottom-of-the-ninth, walk-off celebrations. And both led to the UA’s first Pac-12 baseball championship since 1992.

But it’s what came next that makes Andy Lopez’s 2012 UA baseball club Tucson’s Team of the Decade.

“It’s been a long time since I’ve been part of something like this,” said Lopez, who had coached Pepperdine to the national championship in 1993. “They were up to every challenge against the most difficult competition in the country.”

The Road to Omaha began in earnest on a Friday night at Hi Corbett Field. Arizona beat ASU in an epic 1-0 game as third baseman Seth Mejias-Brean doubled to left field, scoring Robert Refsnyder from first base.

To make the moment more dramatic — if it was possible — Refsnyder ignored third base coach Matt Siegel’s stop sign and beat the throw to the plate. A crowd of 5,451 at Hi Corbett roared.

Two days later, with the Pac-12 title at stake, the Wildcats beat the Sun Devils 8-7, as outfielder Johnny Field hit a two-out single. The series drew 14,075 and will go down as one of the most memorable UA-ASU baseball showdowns in modern history.

Arizona then swept through the subregionals, routing Missouri and Louisville by a combined score of 47-10, and then eliminated St. John’s in two Super Regional games at Hi Corbett.

But it was what came next that made the 2012 Wildcats the Team of the Decade. Once at TD Ameritrade Stadium in Omaha, Nebraska, they went 5-0, beating Florida State twice, UCLA and two-time national champion South Carolina twice.

It was Arizona’s first baseball national title since 1986.

The Wildcats led the Pac-12 with a .329 batting average. Shortstop Alex Mejia, the Pac-12 Player of the Year, hit .357 and expertly fielded his position. Outfielder Refsnyder, the MVP of the World Series, went 10 for 21 in Omaha. Field and Mejias-Brean hit .370 and .356, respectively.

“It’s the type of team that comes along every generation, if you’re lucky,” said Lopez.

Here’s the list of Tucson’s Top 10 Teams of the Decade:

1. Arizona baseball, 2012: The Wildcats swept No. 2 Stanford in midseason, establishing confidence that a national championship was possible.

The state’s Player of the Year was pitcher/shortstop Mattie Fowler, daughter of the coach, who hit .569 with 17 home runs and a state-record 91 RBIs. Fowler also was 14-0 with an 0.85 ERA as a pitcher, one of the leading seasons by any player in Arizona prep softball history.

3. Pima College men’s soccer, 2018: After knocking on the door of an NJCAA national championship for two decades, the Aztecs broke through in 2018, finishing 26-2 and producing the national player of the year in Hugo Kametani.

Coach David Cosgrove’s club lost its season opener in overtime to Arizona Western and then went 26-1, beating No. 3 Monroe College of New York 1-0 in the semifinals, and scoring in double-overtime against No. 1 Barton Community College of Kansas to win the title game 2-1.

4. Arizona women’s golf, 2018: Coach Laura Ianello’s Wildcats spent most of the regular season ranked in the Top 10, but the Pac-12 was so good that at the NCAA Championships in Arkansas, conference rivals No. 1 UCLA, No. 3, USC and No. 5 Stanford got most of the attention.

But sixth-seeded Arizona won it all with two of the most dramatic golf shots in school history.

First, to reach the final match-play group of eight, junior All-American Bianca Pagdanganan had to eagle the 18th hole just to put Arizona into a playoff for the final match play spot. Arizona won in overtime. She made a 30-foot putt for the eagle.

The Wildcats then knocked off No. 1 UCLA in the quarterfinals, No. 5 Stanford in the semifinals and No. 2 Alabama in the finals, when junior Haley Moore sunk an 8-foot putt, an all-or-nothing shot for the ages.

5. Salpointe Catholic High School football, 2013: In what remains the only state football championship at Salpointe since the school opened in 1950, coach Dennis Bene piloted the Lancers to 14-0 record, outscoring opponents 697-101.

The Aztecs beat teams from Maryland, Kansas and Illinois at the NJCAA finals before losing the championship game 89-85 to Triton College of Illinois. Three top scorers from Tucson high schools — Keven Biggs (17.1), Isaiah Murphy (15.9) and Abram Carrasco (16.6) — led the way.

7. Arizona men’s basketball, 2013-14: Ranked No. 1 from Dec. 9 to Feb. 2, the Wildcats opened the year 21-0 before losing on a last-second shot at Cal. Starting forward Brandon Ashley broke his foot in the game and missed the rest of the season.

Even without Ashley, the Wildcats finished 33-5, winning the Pac-12 at 15-3, and reached the Elite Eight by beating a strong San Diego State team 70-64. But in the Elite Eight, Wisconsin prevailed 64-63 as Frank Kaminsky scored 28 points and the Badgers stopped Arizona’s last two possessions — a controversial charging call on Nick Johnson, and a subsequent missed Johnson jumper at the buzzer. Johnson was the Pac-12 Player of the Year. Freshman Aaron Gordon was honored as the league’s leading freshman.

8. Arizona softball, 2010: In its last berth in the College World Series until 2019, Arizona reached the championship game against UCLA and finished 52-14.

Freshman pitcher Kenzie Fowler, who won 38 games, was the victim of controversial “illegal pitch” calls by one umpire 21 times in the finals at Oklahoma City, but the Wildcats persevered, eliminating favored teams from Tennessee and Washington before losing to UCLA in the finals.

Senior Tim Derksen, the state’s Gatorade Player of the Year, averaged 17 points per game and future Baylor point guard Lester Medford averaged 19. The Panthers, coached by Ben Hurley, won their final 19 games, including an 87-77 victory over Tempe High School in the state finals.

Here's what we've learned about the Arizona Wildcats during nonconference play

Arizona is playing fast (but sometimes too fast), misses Stone Gettings and must improve on the glass, coach Sean Miller says.

The Cowboys assistant played a key role in launching the careers of Carson Wentz and Josh Allen.

The redshirt sophomore stepped up when others went down, rushing for more than 1,000 yards and earning all-conference accolades.

The UA women’s golf team of 2018 beat No. 1 UCLA, No. 5 Stanford and No. 2 Alabama at the NCAA Championships to bring home the title.