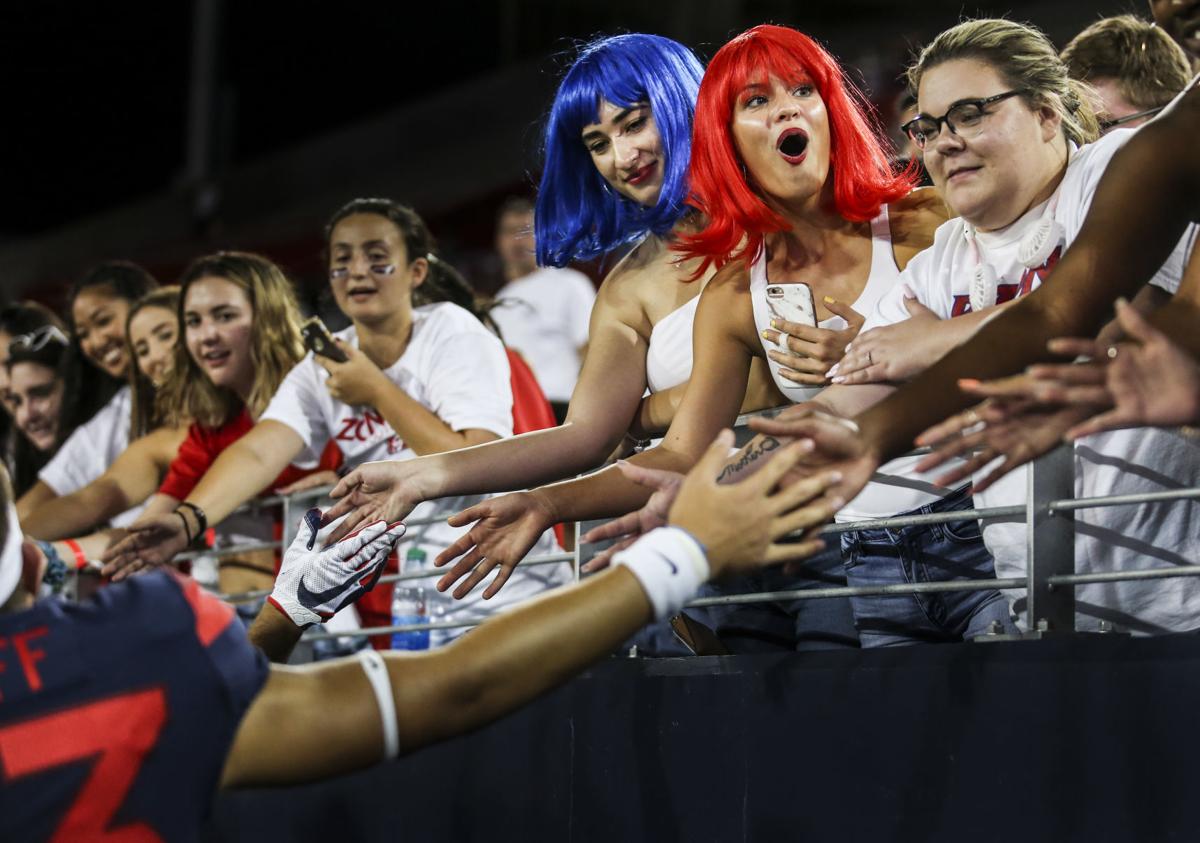 Fans high-five Arizona Wildcat players as they exit the stadium following the win over Texas Tech on Sept. 14. UA is in first place in the Pac-12 South, but is averaging less than 40,000 fans per game. Overall, Pac-12 attendance last year was the lowest since 1982. 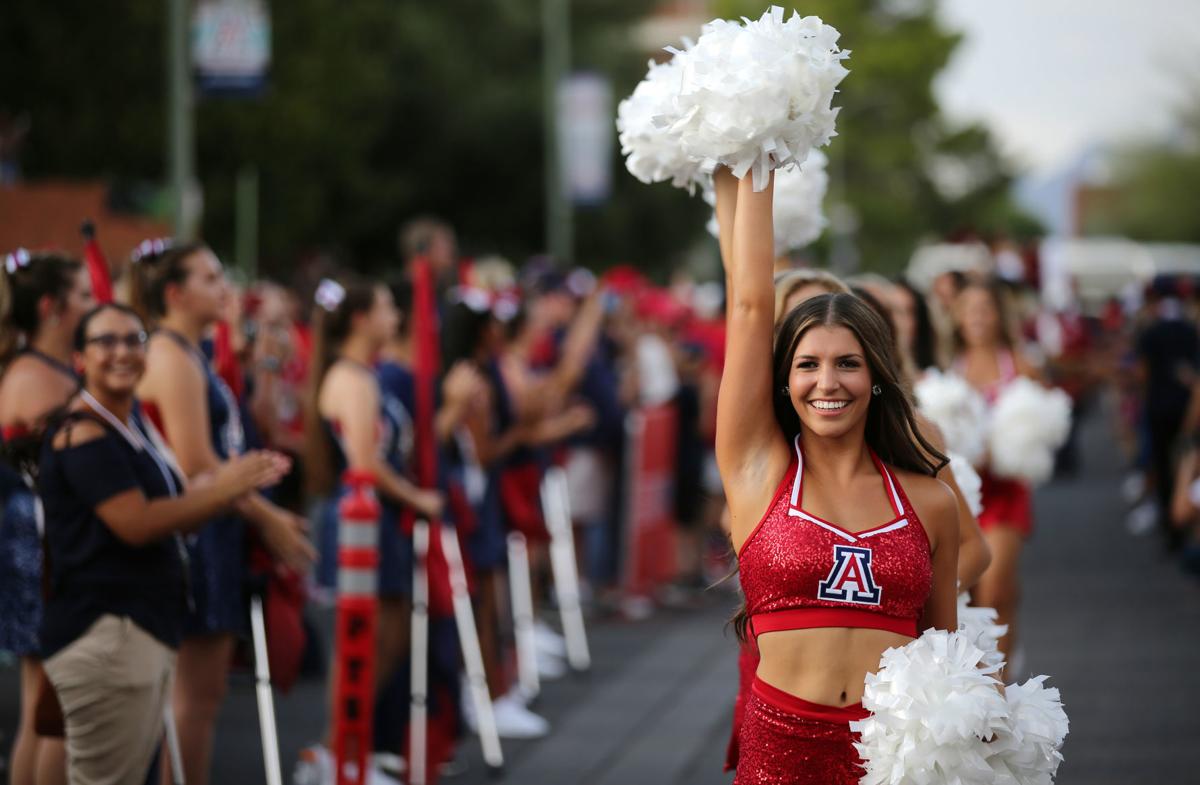 The Arizona cheer team makes it way through the crowd before during the Wildcat Walk earlier this year. UA is 3-0 at home this season, and Washington visits Saturday. 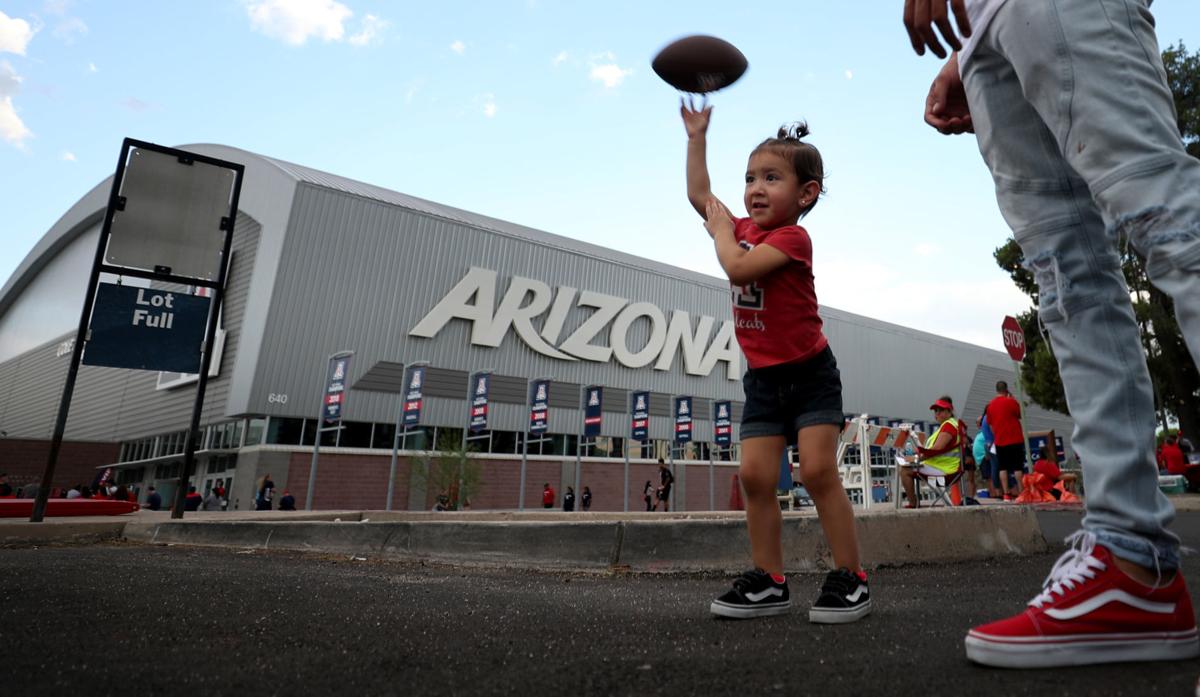 Two-year-old Eyvah Montiel tries to get into the tailgate action and play catch next to her uncle C.J. Carpio before the Wildcats’ game against NAU earlier this season. 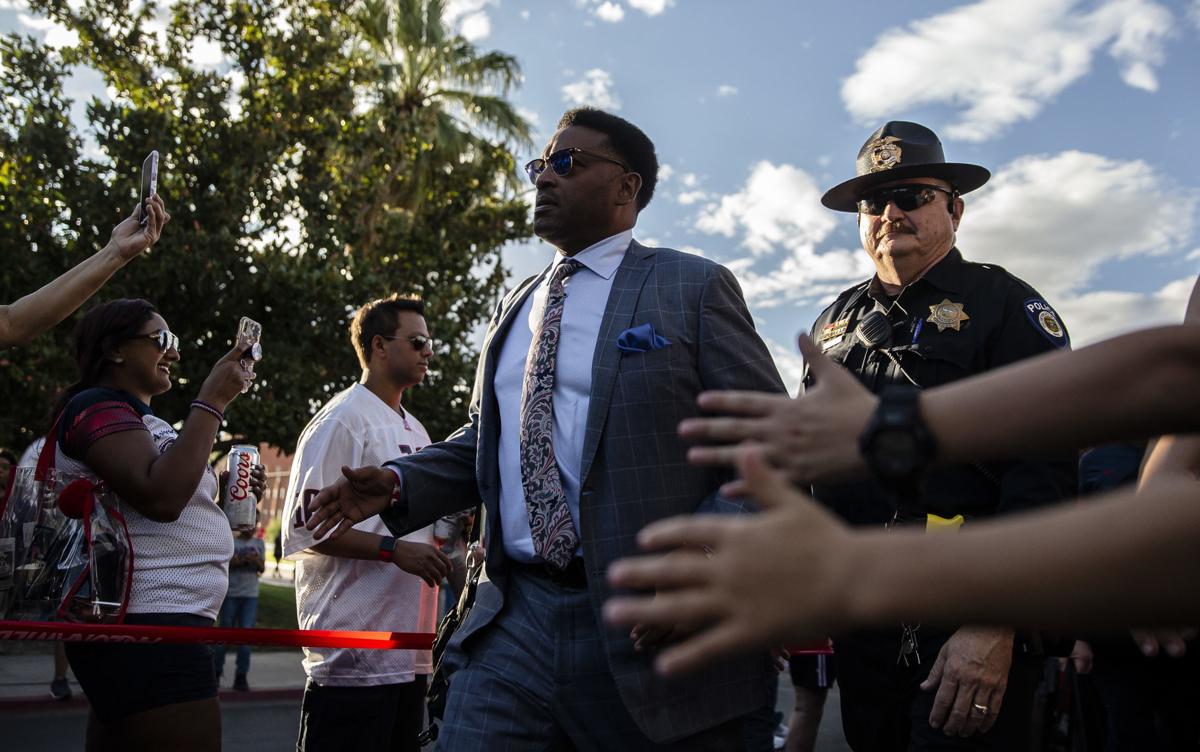 Arizona Wildcats head coach Kevin Sumlin leads his team to the stadium during the Wildcat Walk before a game at Arizona Stadium Saturday, Sept. 14, 2019. 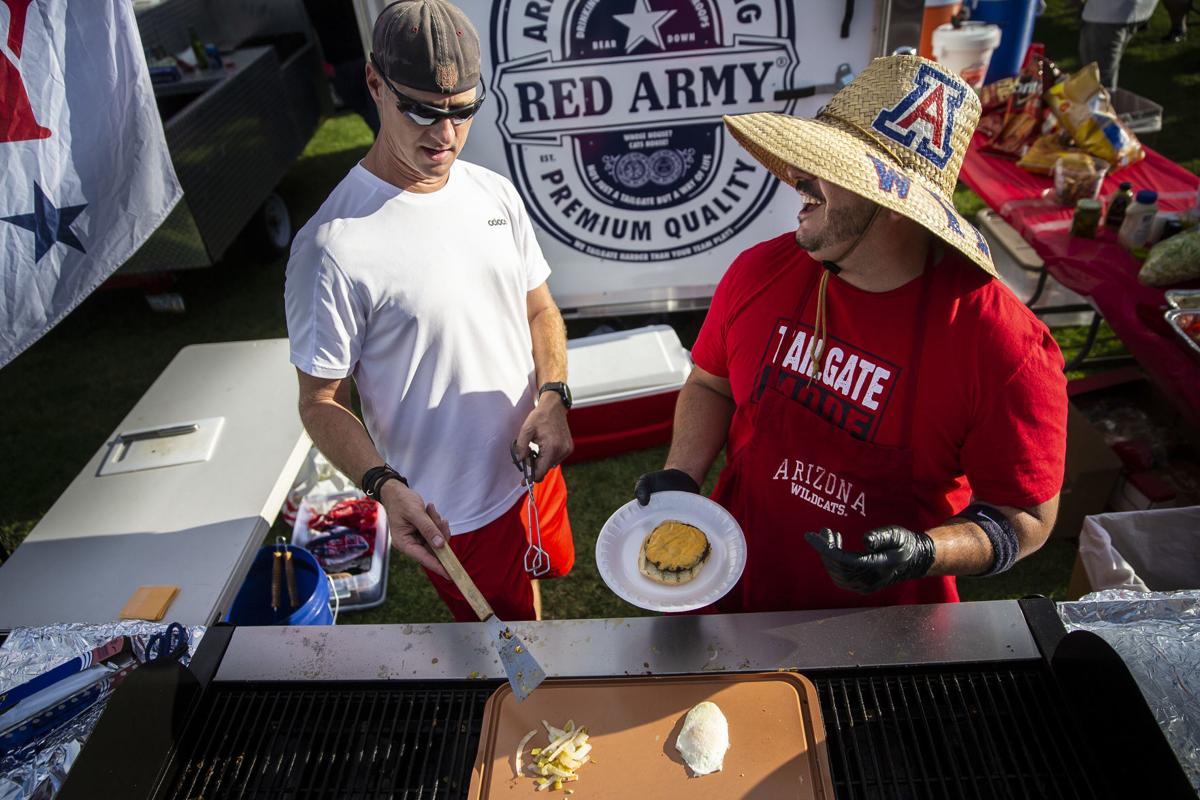 Dave Oathout and Chaz Elsten grill burgers at their Red Army trailer in the tailgating area before the start of the Arizona Wildcats game against the Texas Tech Red Raiders at Arizona Stadium Saturday, Sept. 14, 2019.

Saturday’s walk to Folsom Field, sunny and 63 degrees, with the Flatiron Mountains as a backdrop and thousands of Aspen trees awash in yellow and gold, was what every athletic director in the Pac-12 wishes to duplicate.

I’ve never seen anything to match it at the Rose Bowl or at Autzen Stadium or any stadium in the Pac-12. It’s all campus, with tailgating everywhere. There are no bordering big-city streets abuzz with traffic. If you are of a certain age, it is a journey back to your college days.

Today’s collegial “game day experience” is of such importance that most Pac-12 schools employ a division of full-time experience specialists.

And let’s be honest, what they can’t often duplicate is a 2:30 p.m. local kickoff; it made Colorado’s game day experience so appealing that a sellout crowd of 52,569 attended

Less than an hour after Arizona beat Colorado, UA athletic director Dave Heeke got to work on Arizona’s game-day experience. He tweeted “... it’s time for us to fill Arizona Stadium. No excuses!”

More than 400 people acknowledged or responded to Heeke’s message; there was a split between those who pledged support and those who complained about the 8 p.m. kickoff for Saturday’s game against Washington.

By the time Heeke awoke on Sunday, two of the advantages of drawing fans to the Washington game had gone poof.

One, the Huskies were unceremoniously dumped by unranked Stanford late Saturday night, falling from the Top 25. Two, Fox and Dish Network settled a two-week dispute, which means the UA-Washington game will now be available on FS1 to Dish subscribers in Southern Arizona.

Those wired to Dish now can stay home Saturday night and not miss a snap, not worry about parking, not dread ticket prices nor endure long referees’ replays while FS1 provides scoreboard updates, Top 25 highlights and up-close, slow-mo replays of virtually every Khalil Tate pass.

These are the primary reasons Arizona is averaging its lowest home attendance, 38,777, since 1975 — a year before the upper deck was built at Arizona Stadium.

The game day experience, especially in the Pac-12, is a term that only recently gained momentum and became a thing. That’s because attendance has fallen so much that last year’s league average, 46,589, was its lowest since 1982 and is likely to go lower this season.

Only Utah and Colorado have sold out home games this season. The Utes have sold out 60 consecutive games at Rice-Eccles Stadium, a reflection of the school’s step into Top 25 relevance and also its relatively small capacity, 45,900.

Tickets are in such demand in Salt Lake City that Utah athletic director Mark Harlan is now spending $80 million to add 6,000 seats in the south end zone.

Washington, with the vast Seattle metro area as a fan base, can squeeze 70,138 into Husky Stadium, but this year has failed to get past 67,589. But Husky Stadium, much like Sun Devil Stadium and the Los Angeles Coliseum, is in the middle of a concrete jungle.

Colorado has sold out two games this year — against rival Nebraska and Saturday against Arizona — but it can’t be based on football tradition. The Buffaloes have had one winning season since joining the Pac-12 in 2011. Yes, one.

The game day experience at Folsom Field is such that when ticket-buyers enter Balch Fieldhouse before taking a seat on the west side, they can watch two college football games on massive screens in an indoor environment with eight beer concessions stations.

On the east side of Folsom Field, the Crawford Club offers the most unmatched view in the conference: the Rooftop Terrace has unfettered views of the Flatiron Mountains. And then there’s the adjacent Champions Club, with lounge-type outdoor seating, the only one of its kind in the league.

Moreover, the playing surface at Folsom Field is closer to seating areas than any in the Pac-12. It’s intimate. It’s beautiful. It’s a sellout waiting to happen.

Washington gets a lot of attention for the beauty of Lake Washington adjacent to Husky Stadium, but that’s only when it’s not raining.

The views of the Wasatch Mountains from Utah’s Rice-Eccles Stadium is sometimes intoxicating, but only No. 3 in the state, trailing the stadium views at BYU and Utah State.

And even though Cal’s Memorial Stadium seems like a relic of the 1940s, you can squint through the fog-mist-smog to see the distant Golden Gate Bridge. That’s about the only plus of that old piece of earth.

Arizona’s game-day experience has fully changed in the last 10 years. There are beer gardens on both sides of the stadium and in the north end zone. The video board is among the largest of its kind in football. Tailgating space on the UA mall is can’t-miss stuff.

But Tucson fans haven’t responded in numbers. After Arizona’s 2017 win at Folsom Field, the night Khalil Tate rushed for an NCAA-quarterbacking-record 327 yards, the Wildcats returned home for a 6 p.m. kickoff against 3-2 UCLA with Josh Rosen at quarterback.

Two weeks later, after Tate had been a superhero for three straight games, all UA wins, the Wildcats returned to Arizona Stadium to play No. 15 Washington State. It was a 6:30 p.m. kickoff.

Given Tucson’s diminishing involvement, Arizona Stadium would be better if, like Utah, it only seated 45,000.

Heeke wouldn’t have to go to social media seeking support. The fear of being left out might motivate fans to turn off the TV and get a tailgate spot.

Aspen trees don’t surround Arizona Stadium, and 2:30 p.m. kickoffs are as rare as 63 degree football afternoons. But if the Wildcats are ever going to get to that long-anticipated Rose Bowl, the people of Tucson are going to have to show they care.

Louisiana linebacker Jabar Triplett ready to pick a college, and Arizona Wildcats are among his options

The Star talked to the three-star recruit ahead of his Oct. 14 decision.

Tailback Michael Wiley and defensive players Christian Roland-Wallace, Kyon Barrs and Bobby Wolfe are among the freshmen who have stepped up for the Cats.

It's the highest Arizona has been picked to finish in 14 seasons.

Justin Spears, Michael Lev and the latest addition to the Star sports team, Alec White, discuss the latest with the UA football team after the…

High school football: Statistical leaders through the first half of 2019 season

A look at the statistically best performers on offense and defense through the first half of the high school football season.

The senior wasn’t part of the game plan against Texas Tech; he showed he belonged with a clutch performance against Colorado.

The Star's Bruce Pascoe on what was seen — and heard — at Pac-12 Media Day in San Francisco.

'He was like a little boy': President Trump mocks Wildcats great Steve Kerr over China response

In short order, Drake Dabney has become one of the Arizona Wildcats’ biggest fans.

Greg Hansen: Mike Paul, a baseball encyclopedia and old-school scout, hangs it up

The 75-year-old has been in professional baseball since his early 20s.

The Wildcast, Episode 216: What to expect from Arizona's home bout vs. Washington

Don't look now, but the Arizona Wildcats are atop of the Pac-12 South. With the Washington Huskies coming to Tucson for the first time in thre…

'Mr. Football' on why Washington draws, what makes a good QB and who wins when Wildcats, Huskies meet

The Star's columnist checks in ahead of Saturday night's showdown between Washington and Arizona.

What to watch for when the Arizona Wildcats host Washington

Three things to keep an eye on when the Cats battle the Huskies at Arizona Stadium on Saturday night.

University of Arizona athletes matched their all-time high in graduate success rate in 2018, a 13-percent increase over the last seven years.

Fans high-five Arizona Wildcat players as they exit the stadium following the win over Texas Tech on Sept. 14. UA is in first place in the Pac-12 South, but is averaging less than 40,000 fans per game. Overall, Pac-12 attendance last year was the lowest since 1982.

The Arizona cheer team makes it way through the crowd before during the Wildcat Walk earlier this year. UA is 3-0 at home this season, and Washington visits Saturday.

Two-year-old Eyvah Montiel tries to get into the tailgate action and play catch next to her uncle C.J. Carpio before the Wildcats’ game against NAU earlier this season.

Arizona Wildcats head coach Kevin Sumlin leads his team to the stadium during the Wildcat Walk before a game at Arizona Stadium Saturday, Sept. 14, 2019.

Dave Oathout and Chaz Elsten grill burgers at their Red Army trailer in the tailgating area before the start of the Arizona Wildcats game against the Texas Tech Red Raiders at Arizona Stadium Saturday, Sept. 14, 2019.