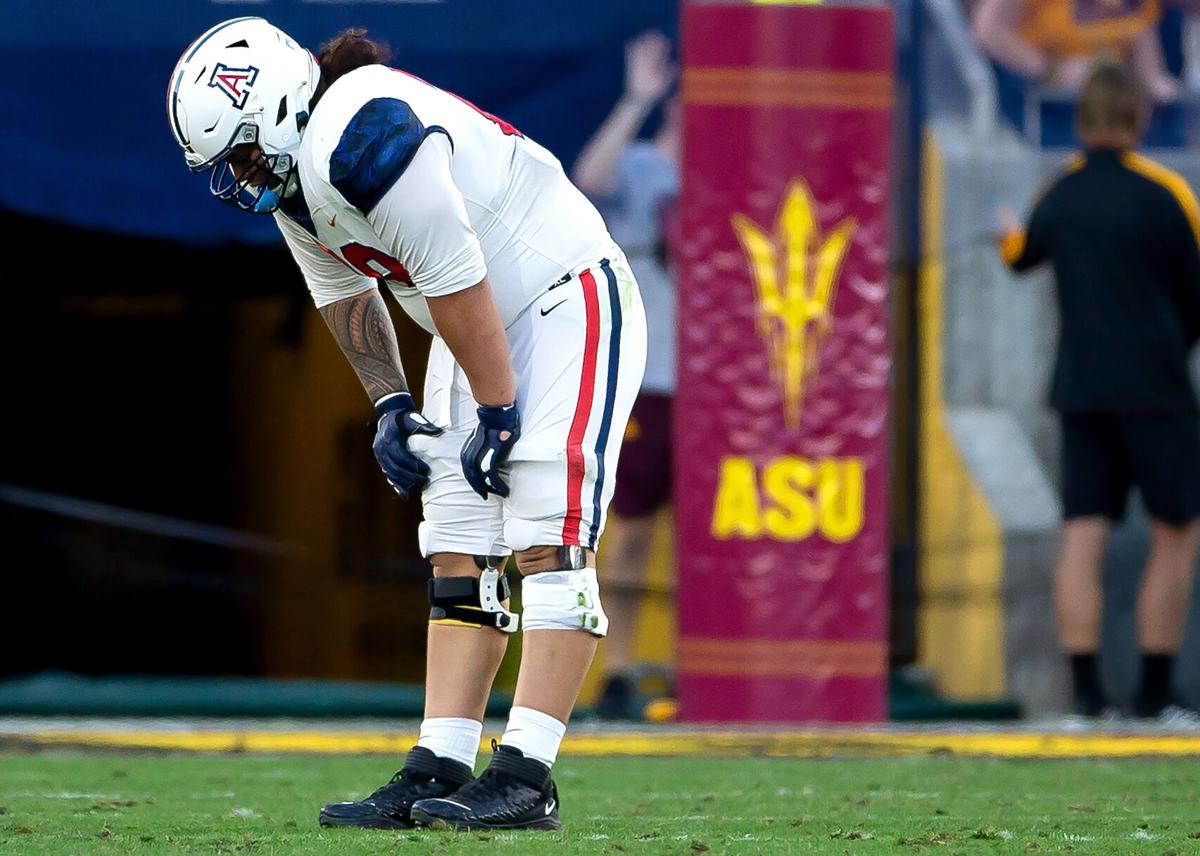 Arizona offensive lineman Donovan Laie takes a moment to catch his breath after running downfield in a failed attempt to catch ASU's Jack Jones during Jones' interception return for a touchdown in the fourth quarter. Mistakes, like the pick-six, doomed Arizona in a 38-15 loss. 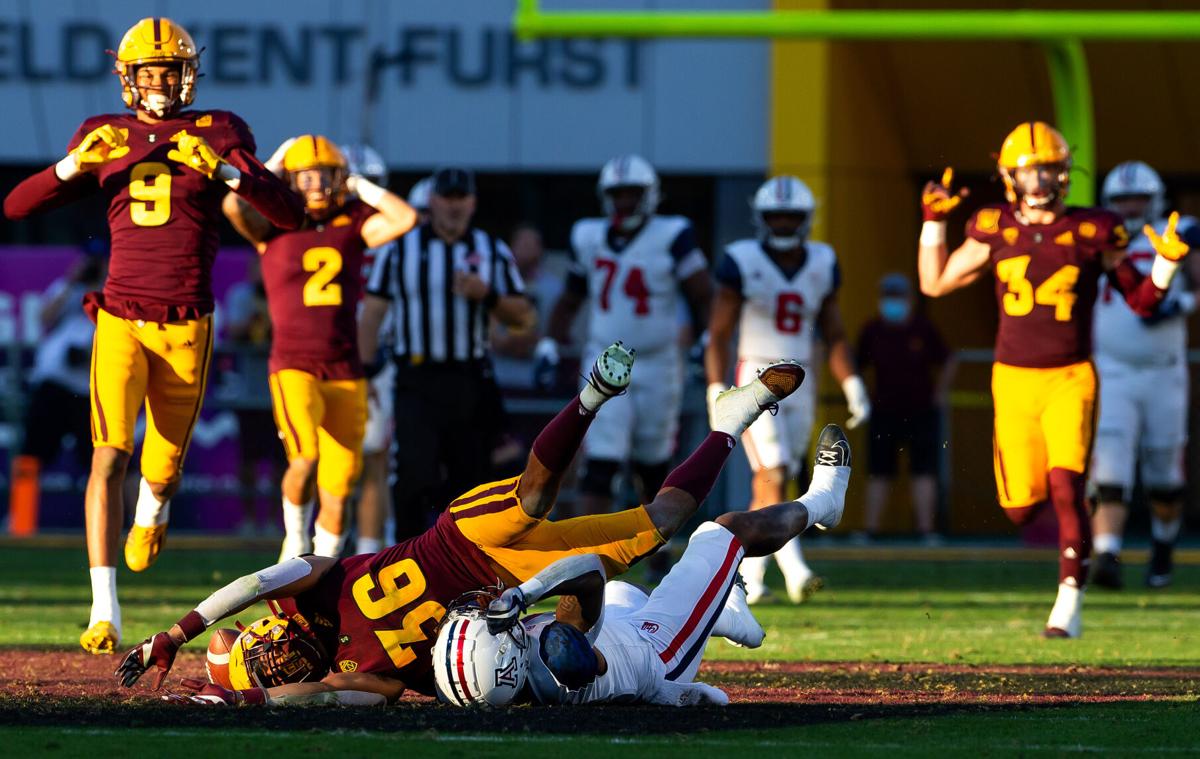 TEMPE — Someone in Nebraska examined the NCAA record books last week and discovered that the Cornhuskers were the first team in college football history to lose nine games by single digits.

So I’m not buying Arizona coach Jedd Fisch’s oft-repeated line of: “You start out losing big, then you lose little, then you win little and then you win big.” The Wildcats finished Fisch’s inaugural season 1-11 with a 38-15 Territorial Cup loss to ASU, but using the Nebraska logic, Arizona advanced to Stage II of Fisch’s big-to-little-to-big theory.

Save it for someone in a corn field.

The Wildcats lost five games by single digits and hung tough with ASU, Oregon and UCLA until the second half, but it was unequivocally the worst season in school history. It finished in last place. It was capped by a fifth consecutive loss to ASU, a game that has been the measure of a good (or bad) Arizona football season since 1899.

Do you know what close buys in college football? A lifetime of regret.

“They’re going in the right direction,” said Edwards. “There’s no doubt about that.”

But despite Edwards’ encouragement, Arizona’s stick-close-for-three-quarters loss at Sun Devil Stadium on Saturday was neither a sign of progress nor a hint that next year Arizona and Nebraska will be matched in the Rose Bowl.

In the 12th game of the season, any progress Arizona had made was obscured by the following:

An invalid fair catch on a punt that led to holding in the end zone that led to a safety, two points for the Sun Devils.

Calling timeout to prepare for an ASU 2-point conversion attempt and then only having 10 men on the field as ASU completes the 2-point play.

One touchdown in six red-zone possessions (inside the ASU 20), which means Arizona finishes the season ranked 65th — last — in FBS football in red-zone touchdown ratio.

Arizona quarterback Will Plummer fumbling while trying to avoid a tackle. ASU recovered, returning it to the UA’s 1-yard line.

Plummer under-throwing a sideline pattern in the fourth quarter — the game still somewhat in doubt at 31-15 — leading to an 87-yard interception return. Game over, 38-15.

The rivalry has been one-sided the last five years, but it doesn’t mean the Sun Devils approach the game with any less vigor. Or that Edwards won’t do all in his power to extend the streak to six next November in Tucson. His team is feeling no pity for the “kitty.”

ASU quarterback Jayden Daniels referred to the Wildcats as “our little brothers.”

And ASU defensive lineman Tyler Johnson piled on, laughing as he said “our little brothers can take a nice little 2½-hour drive back home.”

It’s not that the core Arizona football fan doesn’t understand the situation. If the Wildcats are to break .500 again, it might take until 2024. It’ll take patience, a complete buy-in to the word on those navy blue game-day shirts that Fisch has worn on the Wildcat Walk at Arizona Stadium: BELIEF.

I believe that the No, 1 man in the belief category appears to be Arizona president Robert C. Robbins. He spent the pre-Territorial Cup week sitting behind the bench of Arizona’s uplifting basketball victory over Michigan in Las Vegas, and then flew commercially to the Virgin Islands to occupy a similar seat at Adia Barnes’ women’s basketball victory over Vanderbilt.

But Robbins, dressed in a red shirt and wearing red Nike shoes, wasn’t suffering from jet lag Saturday. He spent the entire 3½ hours pacing the UA sideline Saturday afternoon. Robbins wasn’t just out of sight behind the bench, he often walked in front of Fisch and the coaching staff during his end zone-to-end zone walk.

I’m here for you, right?

Can you name another Pac-12 president who walks the sideline during the worst season in school history? No way. They would hide. But on Saturday, even Arizona athletic director Dave Heeke walked to midfield at game’s end — as ASU defensive back Chase Lucas sprinted the length of the field carrying the Territorial Cup trophy — to put an arm around Fisch’s shoulder and walk to the locker room with his coach.

What could Heeke have said?

Greg Hansen's countdown series is now a book, and Star readers get $5 off

Cats put up a better fight than last year but are no match for the Sun Devils.

News and notes from Saturday's Territorial Cup game in Tempe.

By the numbers: Explaining how ASU beat Arizona in Saturday's Territorial Cup game

Arizona's red zone issues once again plagued the Cats in their loss to ASU in Tempe.

The Star's Greg Hansen updates the "triple-transfers" who once played at Arizona and checks in with notes on Pima College's history of sports success, the Tucson Marathon and Luke Walton.

Arizona was led by star quarterback Nick Foles, who threw for 370 yards and two touchdowns. Juron Criner had nine receptions for 134 yards and a touchdown. To many, though, it remains "The Bryson Beirne Game."

Sacramento State had just one offensive rebound in the first half despite missing 23 shots.

Notes, quotes and stats from the Arizona Wildcats’ 38-15 loss to Arizona State

Pertinent factoids, words and numbers from the Cats' season-ending defeat against the Sun Devils.

Hear what Jedd Fisch said after the Arizona Wildcats concluded the 2021 season and move forward to the offseason.

Revisiting the loss to the Sun Devils, assessing the '21 campaign and looking ahead to next year.

Tucson's Jim Fogltance worked perhaps the most infamous game in college football history — and countless others.

In college football, it’s not about the X’s and O’s as much as it’s about the Jimmys and Joes.

Arizona offensive lineman Donovan Laie takes a moment to catch his breath after running downfield in a failed attempt to catch ASU's Jack Jones during Jones' interception return for a touchdown in the fourth quarter. Mistakes, like the pick-six, doomed Arizona in a 38-15 loss.