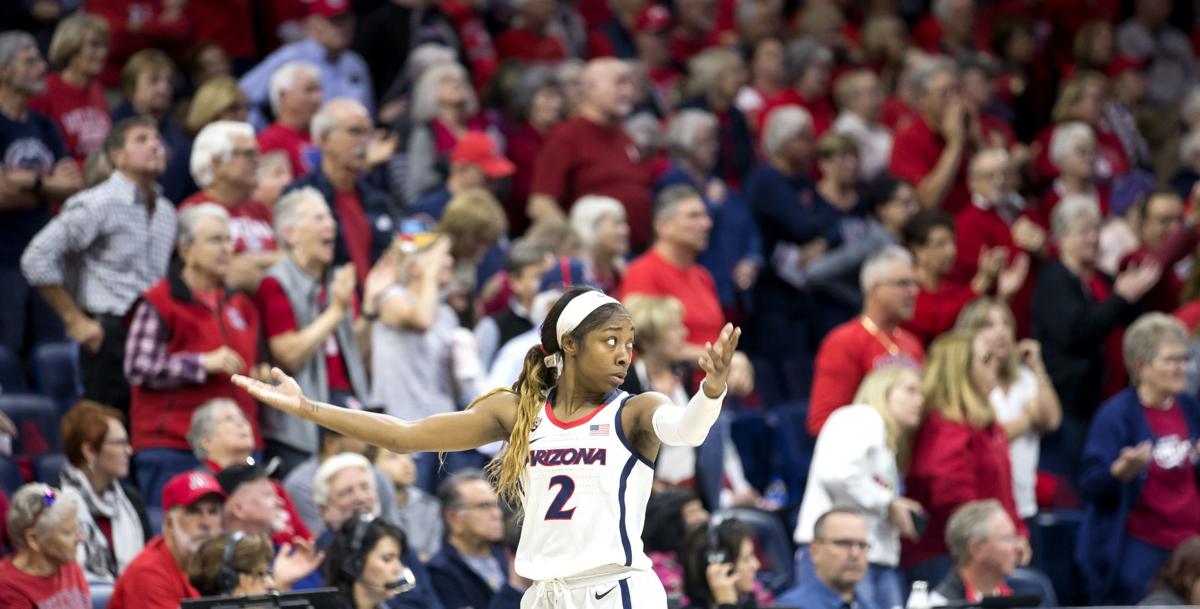 Arizona Wildcats guard Aari McDonald (2) pumps up the crowd during the fourth quarter of the No. 18 Arizona Wildcats 71-64 loss to No. 2 Oregon Ducks at McKale Center in Tucson, Ariz. on January 12, 2020. 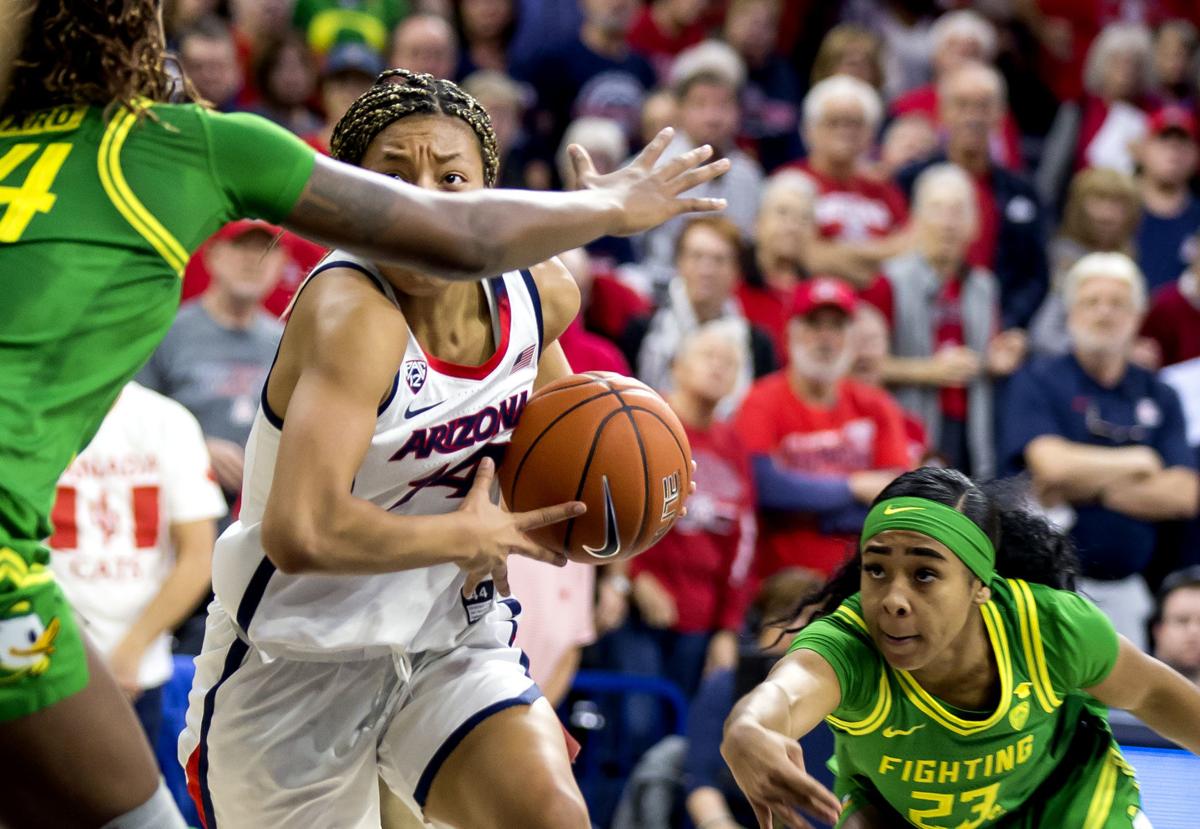 Arizona Wildcats forward Sam Thomas (14) penetrates the paint during the fourth quarter of the No. 18 Arizona Wildcats 71-64 loss to No. 2 Oregon Ducks at McKale Center in Tucson, Ariz. on January 12, 2020.

Adia Barnes didn’t have to do this. She didn’t have to agree to return to her alma mater and coach Arizona’s women’s basketball team out of what seemed to be permanent residence in last place. She could’ve simply pursued a hard job, not one that sometimes seemed part punishment, part impossibility.

You want a comparison? It has been like coaching the Cleveland Browns.

There is no better comparison between good and bad than Oregon and Arizona. In her last six meetings with the Ducks — Oregon has never been ranked lower than No. 8 nationally — Barnes’ Wildcats lost by 33, 29, 14, 18, 13 and 14.

The Ducks won 71-64 Sunday at McKale Center but you’d never recognize the place from what it looked like on Barnes’ first day on the job, April 2016.

More than 13,000 fans paid to watch the Wildcats over the weekend. Both games were decided in the final minute, hard-fought thrillers against Oregon teams that haven’t loss to Barnes.

Over 48 hours at McKale, things changed; the Wildcats are “getting there.”

“It takes five or six years to get there,” said Barnes. “Next year we’ll be better.”

She talked about how Pac-12 opponents used to circle Arizona on the schedule and sigh, happy for a gimme in Tucson.

Arizona lost to the Beavers and Ducks because it is one shooter and one inside presence short. It lost because it doesn’t yet know how to finish a big-time opponent.

Five years ago, when Barnes was an assistant coach at Washington, she flew to Fairbanks, Alaska, to recruit All-American prep center Ruthy Hebard. Many of the big names pursued Hebard — Louisville, North Carolina, Oregon State and the Huskies, then a Sweet 16 program.

Hebard, who is an athletic 6-feet 4-inches, a shooter and rebounder who can take you to the Final Four, chose Oregon and has become the most feared inside player in the Pac-12. She’s the one who got away from everyone but the Ducks.

On Sunday, Hebard’s presence was such that the first-ever McDonald’s All-American to play for Arizona, 6-2 sophomore Cate Reese, did not get her first rebound until 6:35 remained in the third quarter.

That’s not a typo.

Reese leads Arizona with 8.8 rebounds per game and over the last month grabbed 17 rebounds against UTEP, 11 against UCLA, 10 against Arizona State and 11 against Oregon State.

But by the time Reese got her first rebound Sunday, Hebard and All-American point guard Sabrina Ionescu had combined for 16. The Ducks out-rebounded Arizona 39-23, and that was the difference in a one-possession game with 38 seconds remaining.

A basketball death by inches, right?

“Ruthy takes the ball off our backs, not over our backs,” said Barnes, explaining that Hebard was tall enough to get the ball in traffic and not commit a foul.

If you have a skilled inside player like Hebard, you can dream big dreams in women’s college hoops.

Barnes estimated that there are about five prospects like Hebard in the high school recruiting pool every year. “Usually the great posts go UConn or Louisville or Stanford,” said Barnes. “Everybody in America needs a (center).”

Unlike her 2015 trip to Alaska, Barnes this time got the valued high school center she pursued. In November, Arizona signed 6-5 Lauren Ware of North Dakota, a 5-star prospect who is generally ranked in the Top 25 of all women’s basketball recruits.

By this time next year, Cate Reese is expected to have a Hebard-type center helping her get those rebounds against the Pac-12’s Top 25 clubs.

The Ducks played a 3-2 zone defense for 40 minutes, a scheme that magnified Arizona’s weaknesses — a lack of size and, more so, limiting McDonald from her almost unstoppable beeline drives to the basket. McDonald still scored a game-high 25 points, which is remarkable given that the UA doesn’t have another player who can command defensive attention, thereby creating more space for her.

Most of McDonald’s 25 points were a testament to pure imagination and determination.

One encouraging development was that McDonald made 5 of 10 3-point shots. That kept Arizona in the game until the final minute. Even though she leads the Pac-12 in scoring, McDonald had been shooting a head-shaking 23 percent on 3-pointers.

Consider her slump over. And consider Arizona’s first round of acid tests of the Pac-12 — a road victory at surging ASU and being a tough-out in setbacks to the nation’s Nos. 2-3 teams — a success.

Not easily pleased, Barnes said she wanted a split. “I want that one big upset,” she said.

Hang on. It won’t be much longer.

How former UA Wildcats fared in NBA this weekend

Colts, who won at Cienega by 22 last week, have risen five spots in recent weeks.

Greg Hansen: Utes will be solid next year — and that’s OK by me

After a lifetime of dreading Utah, Greg would be fine if Utah makes a run to Pac-12 title in 2021.

Arizona Wildcats guard Aari McDonald (2) pumps up the crowd during the fourth quarter of the No. 18 Arizona Wildcats 71-64 loss to No. 2 Oregon Ducks at McKale Center in Tucson, Ariz. on January 12, 2020.

Arizona Wildcats forward Sam Thomas (14) penetrates the paint during the fourth quarter of the No. 18 Arizona Wildcats 71-64 loss to No. 2 Oregon Ducks at McKale Center in Tucson, Ariz. on January 12, 2020.