Greg Hansen: Bruising loss to Gonzaga shows young Wildcats that college hoops is difficult at the top
Share this
1 of 2 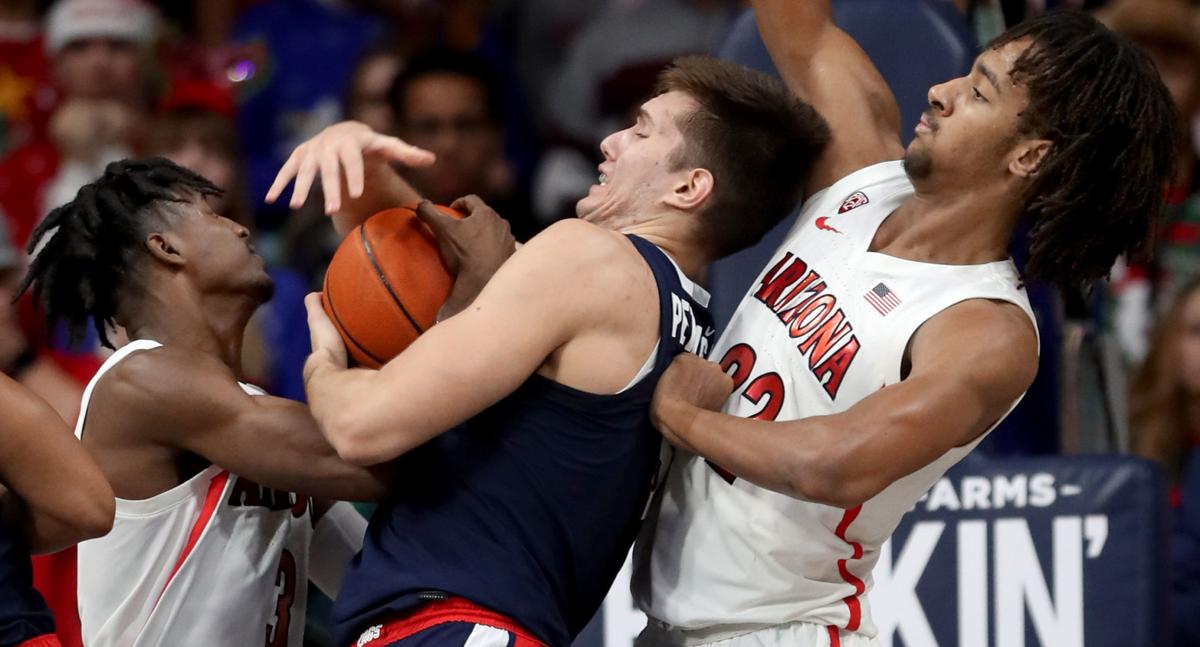 Arizona guard Dylan Smith, left, and forward Zeke Nnaji try to pry a rebound out of the arms of Gonzaga forward Filip Petrusev. The Wildcats rallied late in Saturday’s game at McKale Center before falling 84-80 in a battle of top-25 teams. 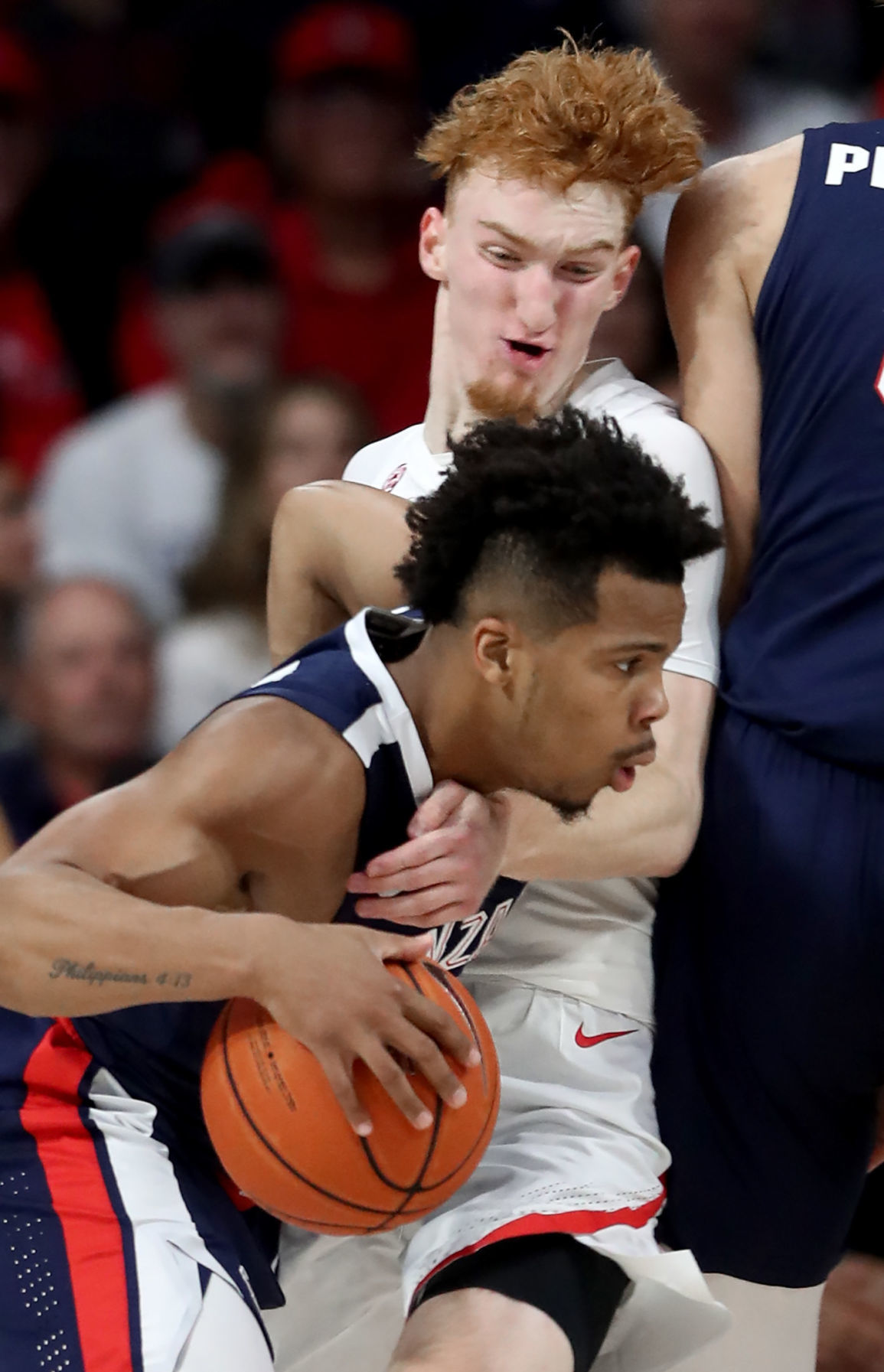 Arizona freshman Nico Mannion hit just one of his first 18 shots and finished 3 of 20 from the field against a veteran Gonzaga defense.

One of the dangers of winning a bunch of early-season home games 104-67, 99-49 and 87-39 is that sooner or later ESPN shows up for a Saturday Night Fight at McKale Center and someone yells “lights, camera, action.”

And you don’t know your lines.

Arizona was so eager to play Big Boy basketball against sixth-ranked Gonzaga that it sprinted the first lap, fists clenched, took a 16-7 lead and got bumped off the stage.

You could almost see it coming.

By the end of the Zags’ 84-80 unanimous decision over the Wildcats, it was a clinic. Layup followed by layup. Dunk followed by dunk.

Don’t be misled by the final margin.

Said Miller: “If you look at the box score, it looks like an even game — but they were 10-15 points better than us tonight.”

The home-court advantage and the first sellout crowd of the season were energizing but not nearly enough. But wasn’t it fun to beat Nebraska-Omaha by 50 and San Jose State by 48?

Arizona has played two NCAA Tournament-type teams this season, Gonzaga and Baylor. The UA was out of its element both times; it shot a combined 32 percent, and that’s scary because the strength of this Arizona team is its shooting.

If that’s not stage fright, what is?

Zags coach Mark Few, who knows what “special” is in college basketball, referred to his club’s victory as “special.” That’s a testament to the setting and atmosphere at McKale and, sure, to Arizona’s resolve to fight back in the final 10 minutes. A team with lesser spirit might’ve lost by 20.

The 15th-ranked Wildcats played like the lyrics to a Tom Petty song: “We won’t back down.”

But it’s not good enough yet to hang with a team like Gonzaga. The key word is “yet.”

“I don’t think there’s many teams in America who could come in here and beat those guys,” said Few. “They’re really, really good.”

Really? That’s the unknown about Miller’s young team. What is its growth potential?

Kenpom.com’s analytics pick Arizona as the favorite to win all of its remaining games except an early January roadie to Oregon. That’s fully unrealistic. The Pac-12 road is going to be one fright night after another. Arizona must improve significantly to win games at Washington, USC, Oregon State and Arizona State.

“We’re going to make mistakes, but we’ll fix it,” said UA freshman Josh Green, who shot 5 for 15 afield Saturday. “(Gonzaga) is definitely a lot smarter and older. They know what they’re doing.”

It’s not that Miller isn’t a skilled coach, and it’s not that he isn’t teaching his freshman-laden team the right stuff. But through all of those blowouts over bottom-tier teams many of us forgot how difficult college basketball can be at the top, even when you’ve got McDonald’s All-Americans and future NBA players like Zeke Nnaji.

At one point Saturday, Nico Mannion was 1 for 18 from the field. He made a couple of buckets in a hectic rush to the finish and ended the night shooting 3-for-20. That’s not the first time a touted UA freshman had a night like that. The best pure shooter to put on an Arizona uniform in the last 25 years, Salim Stoudamire, shot 2 for 19 against No. 8 Kansas in a December 2001 home loss.

As it turned out, it was just one game, as it will be for Mannion, too.

It’s unlikely Mannion has ever faced a defensive matchup like the one he faced Saturday night in Gonzaga’s Ryan Woolridge. A senior, Woolridge was physical and relentless.

“I haven’t had someone who could guard like that at the point,” said Few, who disregarded Arizona’s shooting percentages and said “they are tough to guard, that’s for sure.”

After Miller cooled off, digested the statistics and completed his radio show, his perspective changed from a coach who had lost the UA’s most nationally visible game, to one who understands it’s a long way to Selection Sunday.

“We lost to a better team than us, at this moment,” he said. “How it plays out three or four months from now ... we’re not there yet.”

The 14,644 who sat in the seats at McKale Center surely had one nagging feeling as they walked to the parking lots late Saturday. Gonzaga has won nine straight games against Pac-12 teams, three straight against the UA and seems to have moved to higher ground than Arizona. Cutting into that gap won’t be easy.

Miller spoke with admiration of the Zags the same way the Zags used to talk about Arizona.

“Mark Few and his staff are great at what they do. They really are,” he said. “There’s a reason they’ve had 20-plus years of success. They have a great way of playing. A smart way. They do it with skill. They do it with physicality.

“I just wish we were better and more equipped to deal with what they do and what they did.”

The Wildcats have almost three weeks before returning to McKale, opening the Pac-12 season against Bobby Hurley’s fast-improving Sun Devils.

By then, the drama of a Fight Night loss to the Zags won’t matter.

Seen and heard at McKale Center in the Wildcats' narrow loss to Gonzaga.

The Wildcats fall in a nip-and-tuck affair to the the Bulldogs 84-80 in a match up of top-20 teams at McKale Center, Tucson, Ariz., December 1…

Sean Miller said the Wildcats were thrown off by Gonzaga's smaller lineup.

Sean Miller had his share of excuses to choose from, and he touched on a few.

Nick Merkley and Nate Schnarr had helped Tucson to top of Pacific Division in AHL.

Former Cat has missed last 25 games after testing positive for a diuretic.

Deandre Ayton is back!

Arizona guard Dylan Smith, left, and forward Zeke Nnaji try to pry a rebound out of the arms of Gonzaga forward Filip Petrusev. The Wildcats rallied late in Saturday’s game at McKale Center before falling 84-80 in a battle of top-25 teams.

Arizona freshman Nico Mannion hit just one of his first 18 shots and finished 3 of 20 from the field against a veteran Gonzaga defense.