Greg Hansen: Cats now own nation's longest losing streak, and it may be 2022 before they break out
Share this
1 of 2 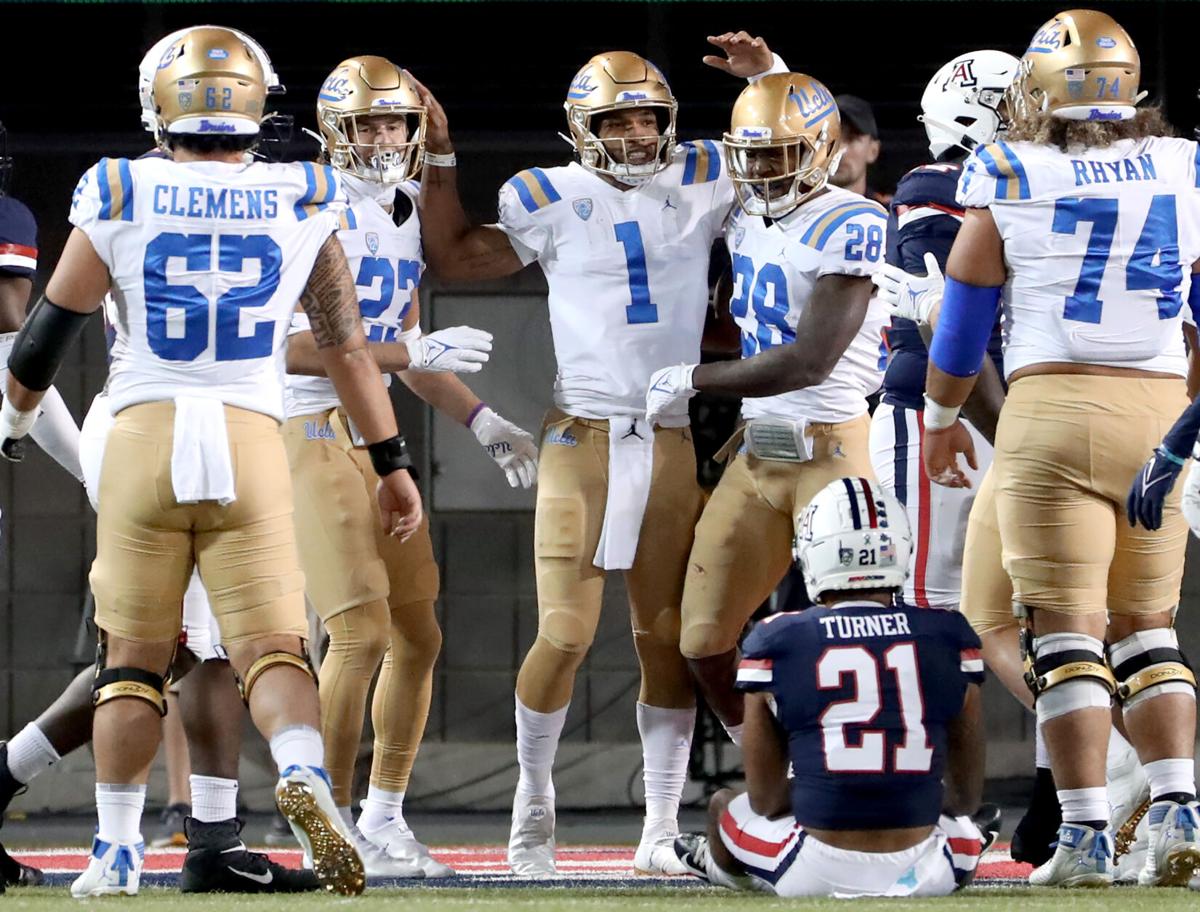 Arizona safety Jaxen Turner watches from the turf as UCLA quarterback Dorian Thompson-Robinson is congratulated by his teammates following a second-quarter touchdown.

Before a modest afternoon crowd of 12,765 at McGuirk Stadium, UMass beat UConn 27-13 Saturday in a game between teams with a combined 0-11 record.

It wasn’t exactly a shot heard around the college football world, but as the Minutemen won their first game since September 2019, fans stormed the field in Amherst, Massachusetts, celebrating with a team that had allowed an average of 49.6 points a game the last three seasons against every conceivable non-football school, from FAU to FIU to EMU and the Toledo Mud Hens. (Oops, Toledo Rockets). Same thing, right?

Tucson was the only other football precinct to understand the meaning of UMass’ unexpected victory. It meant that UMass’ 16-game losing streak has come to a much-anticipated end. It means that Arizona now has the longest losing streak, 17 games, of all 130 FBS teams.

It means that Arizona, UNLV and UConn are the only three FBS teams yet to win a game this season.

If you thought things couldn’t get worse for Jedd Fisch’s Wildcats, you are wrong. After hanging tough with UCLA for three quarters Saturday night, the UA’s recently-discovered playmaker, quarterback Jordan McCloud, was sacked, injured and helped from the field.

ESPN’s cameras captured the agony and tears on McCloud’s face as trainers treated a knee injury. Fisch tried to comfort his quarterback then walked slowly back to the Arizona bench. Game over.

It was a telling snapshot of Arizona football in the 2020s.

UCLA won 34-16 and unlike the UA’s encouraging loss at Oregon two weeks ago, you can now run your finger down Arizona’s remaining schedule and grasp the very real possibility that the Wildcats will go 0-12, stretching their FBS-longest losing streak to 24 games at Sun Devil Stadium on Nov. 27.

“Emotionally, it hurts,’’ said Fisch. “It was first-and-10, the score was 24-16 when (McCloud was injured). We were trying to answer the bell. I think there was a little bit of deflation there.’’

If you don’t have an able-and-ready quarterback in Pac-12 football, you don’t have much of a chance, even at Colorado and at home against Cal, which until Saturday appeared to be winnable games for the Wildcats.

On Saturday, the White-Out at Arizona Stadium became a blackout.

Talk about bad timing. A season-high 43,258 fans showed up, and it was a legit count, not based on pre-game sales or an accountant’s imagination. It was a chance for Arizona to further rebuild its fan-base because, for openers, UCLA isn’t that good.

UCLA’s fourth-year quarterback Dorian Thompson-Robinson only completed eight passes and Chip Kelly’s once-glamorous Oregon-style offense became a one-dimensional running game. For three quarters, the Wildcats were one big play from taking the lead and ending their cumbersome losing streak, which is a Pac-12 record.

But even when McCloud was healthy and mobile, Arizona couldn’t break through. If we’ve learned anything after five games, it’s that Fisch’s roster does not yet have a roustabout, a hitman to create a sack-and-fumble play, or someone to return a punt for a touchdown — or block a punt — or an elusive back or receiver who can turn a 10-yard play into a 65-yard touchdown.

Imagine all the work Fisch and his staff have done the last eight months. Imagine all the progress made. And yet the Wildcats have become historically unsuccessful.

They are no longer inept, as they were under Kevin Sumlin, but week by week it becomes more clear just how much damage Sumlin’s lack of recruiting and player development set back a program that had been competitive for 50 years.

This isn’t on Fisch. It’s on Sumlin and those who hired him.

Arizona is still a between-the-20s team, running, passing and blocking effectively until it gets to the Red Zone and then slowing down the way you do in traffic for a flashing red light. The hardest players to recruit for a football program like the one at Arizona are those who ignore the red lights and find a way to the end zone.

One of the most absurd scenes Saturday night was Chip Kelly’s spy vs. spy routine. The UCLA coach employed five men to hold up large silver screens, each 4 feet by 10 feet, to stand behind the Bruins’ offensive coaches while giving hand signals — play calls — to quarterback Thompson-Robinson.

The purpose of the screens was to block the view of Kelly and his coaches from the Arizona defensive staff in the press box. As if, in maybe 2.8 seconds, a UA defensive analyst could break UCLA’s code, relay the suspected play to Arizona defensive coordinator Don Brown, who would then alert Arizona’s defense to the next UCLA play.

What a laugh. What excess.

The Bruins have two runners, fifth-year senior Zach Charbonnet, a Michigan transfer, and fourth-year junior Brittain Brown, a Duke transfer, who had combined to run for 3,264 yards before Saturday’s game. Plus, UCLA has all five starting offensive lineman returning from 2020.

Against Arizona’s makeshift defense, it didn’t matter that DTR completed just eight passes. Charbonnet and Brown helped the Bruins gain 329 yards on the ground. About the only signal Kelly needed was to shout “run the damn ball.’’

The silver screens should go back to Hollywood along with Kelly and his I'm-smarter-than-you ego.

Nevertheless, Fisch displayed a positive demeanor even as his team failed to score at least 20 points for the eighth consecutive game, the longest scoring futility streak at Arizona since 1967.

“We’re a better team than we were against Oregon,’’ he said. “If we keep doing that, at some point the tide turns, but it hasn’t turned yet. ‘’

A fake ref, a real fight and a wild night: Recalling the UA-UCLA prank and brawl, 10 years later

“It comes up whenever I’m asked what’s the craziest thing I’ve done," he said. "It’s a fun thing to show the video and tell the story."

The Bruins come to Arizona Stadium to face the Wildcats in a Pac-12 South showdown.

Notes and observations from warmups before the Cats-Bruins game at Arizona Stadium.

Notes, quotes and stats from the Arizona Wildcats’ 34-16 loss to UCLA

Pertinent words, factoids and numbers from the Cats' setback against the Bruins.

Hear what the Arizona Wildcats said following the 34-16 loss to UCLA.

Berry was the 38th-ranked corner in the Class of 2022 and has offers from Oregon, Michigan and Cal, among others.

Wildcats volleyball team drops its third straight match, while the UA soccer team has now lost six in a row.

Cardinals stay perfect as defense clamps down on 49ers

Arizona safety Jaxen Turner watches from the turf as UCLA quarterback Dorian Thompson-Robinson is congratulated by his teammates following a second-quarter touchdown.