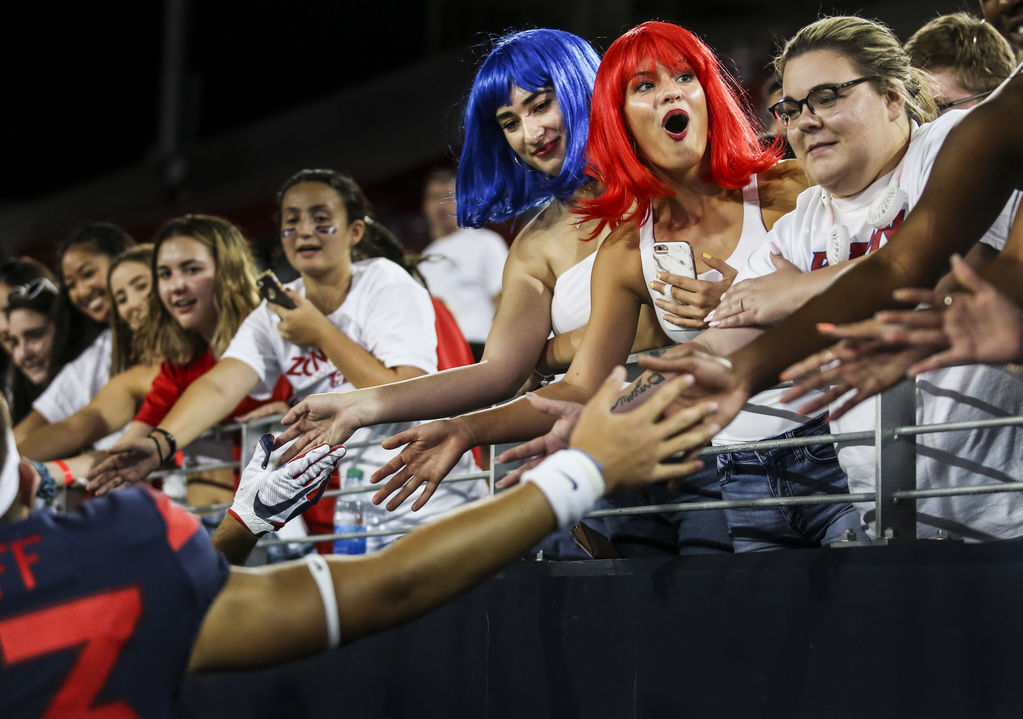 Fans greet UA football players as they exit the stadium after a win last fall. The 2020 football season, which starts Nov. 6, will be played in empty stadiums, though the Pac-12 says it will revisit the decision for other sports starting in January. 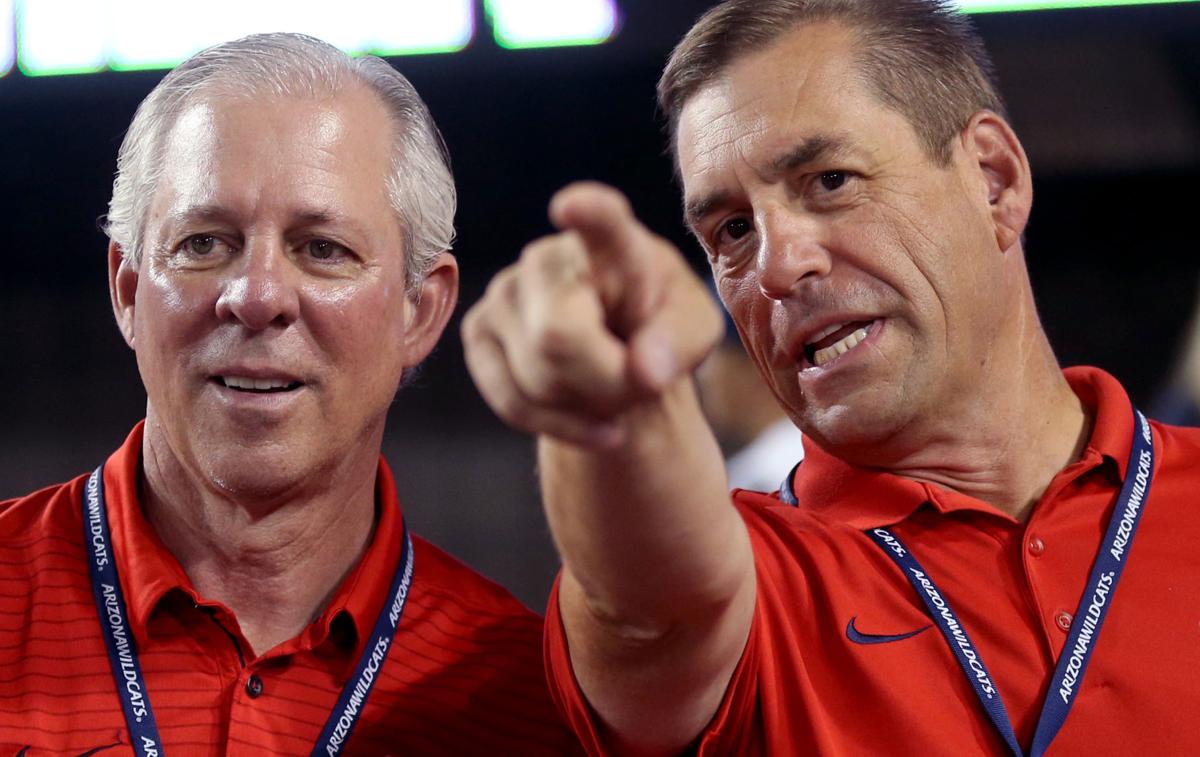 And in a prepared statement from Arizona leaders Robert C. Robbins, Dave Heeke and three coaches, the term “student-athlete” was utilized six times.

To further solidify the league’s return-to-football presentation as a collegiate model and not a cash grab, Oregon President Michael Schill said “this has nothing to do with money.”

This came a few hours after the University of Colorado had been ordered by Boulder County officials to halt public gatherings for college-age residents and paused on-campus classes and activities, including football practice, for at least two weeks.

As a colleague of mine said Thursday, “in exchange for playing football when students aren’t allowed on campus, can we retire the word ‘student-athlete’ forever?”

How about “student-assets” instead? Let’s call it what it is.

The Pac-12 will not allow fans into its facilities for its seven-game schedule that runs through Dec. 18. No fans? No problem. The enterprise of college football will not be denied.

Those who will pay the bills for college football in 2020 have been so eager for business to resume that ESPN2 will televise Saturday’s UTEP game against Louisiana-Monroe. To help cap a day of 23 nationally televised games, ESPN will broadcast the Troy-BYU game in prime time.

We apparently miss football so much that the “Worldwide Leader in Sports” has lowered its standards.

Yet Schill, the Oregon president, said that money was “never once mentioned” as a consideration when the league reversed its decision to delay football until January or February.

“The losses our schools are encountering are huge,” said Schill. “The amount of money we will be paid as a result of going back to play is tiny in comparison to the (overall campus) loss. It had no affect on our decision.”

This seemed a bit of incongruous during Thursday’s TV/Zoom press conference in which the Pac-12’s longtime director of communications, Dave Hirsch, was missing. Hirsch was one of 98 Pac-12 employees either furloughed or laid off recently.

Schill boldly said that “if we have (coronavirus) spikes that are not sustainable, we will just stop playing.”

Well, no kidding. Four college football games scheduled for this weekend have already been postponed.

In some respects, Thursday’s return-to-football decision, while predictable, was one of the four most notable days in the history of the conference. It rivaled the day in 1976 that Arizona and Arizona State were added to the Pac-8, and the 2011 afternoon when Utah and Colorado were invited to join the Pac-10.

And it ranks with the decision in 1986 to finally place women’s sports — basketball, tennis, softball, volleyball, swimming, track and field — under the same umbrella as Pac-10 men’s sports.

The difference is that no one can be certain if the Pac-12’s decision to play football this fall will be anything more than TV programming, a fanless experience in a conference that may lack Top 25 teams.

The most compelling challenge won’t be a Stanford-Oregon game, but rather how successful the Pac-12 will be in keeping infected players off the field and out of harm’s way. That’s the real David vs. Goliath showdown that looms, not the Territorial Cup. But to its credit, the Pac-12 persevered in its diligence to allow scholars, doctors and medical science make the final decision, and not a coach or a group of football players publicly demanding a return to play.

The key statistic this year: Point-of-care testing numbers. Not touchdowns.

Expect some novelties. Dictated by ESPN and Fox, expect night games in December where night games have never been played.

At least fans won’t be inconvenienced in the oft-dreaded “Pac-12 After Dark” series.

All of this may go without much of a hitch; the commissioner and his medical analysts were impressively the first conference to align with a groundbreaking, beat-the-coronavirus testing service, Quidel, which helped to mitigate the concern of returning to football this fall.

But now that ESPN and Fox are busy designing a week-by-week Pac-12 schedule, perhaps starting with the Arizona-ASU Territorial Cup at Arizona Stadium on Nov. 7, paying that $27,500 shouldn’t cost anyone at any school his job. A typical Pac-12 game on ESPN or Fox returns close to $5 million to the league.

Best of all, It won’t cost you a cent from the comfort of your living room sofa.

The Pac-12 Conference is expected to announce plans for a 2020 season Thursday, but the process is easier said than done.

In order to meet the NCAA's new maximum of 27 games, Arizona could simply lop off the four games scheduled to be played before Nov. 25 — home games with NAU, Northern Colorado, Loyola Marymount and Wyoming. It is unlikely UA would keep the remainder of its pre-New Year’s schedule intact.

Pac-12 primer: Examining the factors that led to the league’s decision to play ball

The Pac-12 Conference is launching a seven-game football season on Nov. 6; we explore all the pertinent questions related to that announcement.

Arizona athletic director Dave Heeke said last month he projected UA would lose up to $65 million without football. Friday he said there’s "still a very significant shortfall" in a shortened season — even if television partners pay all or most of what the Pac-12’s contract specifies.

Across Pima County, 25,329 cases of coronavirus have now been confirmed, up 64 cases from the day before.

Fans greet UA football players as they exit the stadium after a win last fall. The 2020 football season, which starts Nov. 6, will be played in empty stadiums, though the Pac-12 says it will revisit the decision for other sports starting in January.