USC wins so infrequently at McKale Center — twice in the last 35 years — that it’s difficult to imagine anything less likely than a Trojan victory over Arizona.

One, the school attempted to honor Sean Miller for his 400th career victory before he could escape to the locker room.

Miller isn’t a let’s-celebrate-in-February guy — he’s not a hey-look-at-me-guy at any time — so he grabbed the game ball from UA President Bobby Robbins and was gone, the most impressive fast break of the evening.

Miller looked at Thursday’s game much differently than the average guy who was pumped by the slump-breaking performance of UA freshman Josh Green. But other than a positive reaction to Green’s 18-point game, Miller’s tone was that of a coach who had just lost his 400th career game.

He referred to his team as “sloppy, fat and happy.”

In March, you take any victory over a team as good as USC and move on with a sense of accomplishment. But in early February, at home, you use it as a teaching moment, as Miller so often does.

“It’s like the jockey coming down the stretch,” said Miller. “You’ve got to pick and choose, but you can only hit it so hard. We were very fortunate to win tonight.”

This is straight out of Coaching 101. Miller is taking no chances on putting a sloppy, fat and happy team on the court Saturday night against UCLA.

He prefers — and expects — Secretariat at McKale.

The second against-the-odds item Thursday was that Arizona used the massive McKale Center TV screen to advertise a ticket package for its five remaining home games. What is this, ASU’s Desert Financial Arena?

The Wildcats are now marketing a four-ticket package, including four hot dogs and four drinks, for $95. It’s like something out of the 1992 Tucson Toros sales plan. As I recall, the last time Arizona needed to market tickets to McKale Center was 1984.

That was the last time the Wildcats didn’t lead the Pac-12 in home attendance, but if you looked into the dark upper deck Thursday night, especially to Sections 103, 121 and 126, you saw the same empty seats that have been unoccupied for most of the last two seasons.

Arizona sold out only the Gonzaga and ASU games this season and is averaging 13,551 at the gate. It’s even below last year’s sobering average of 13,744, the lowest at McKale in eight seasons.

The UA hasn’t averaged below 14,000 two consecutive seasons since 1988, when capacity at McKale was about a thousand fewer than the current occupancy maximum of 14,644.

A lot of Thursday’s angst was predictable.

But if you check the NBA draft evaluations on Nbadraft.net, you’ll see that Green is rated a 6 and Mannion a 7 on a 1-10 scale in the “NBA ready” category.

Getting them to a 10 is what occupies so much of Miller’s time, and as we’ve learned through 10½ seasons, he’s not an easy grader. He insists on more than he’s getting from everyone on his squad.

“We had a hard time practicing leading up to the game,” said Miller. “We didn’t have a good shoot-around (Thursday). We have to learn from this, try our best, and see if we can be better Saturday.”

This season’s Arizona-UCLA showdown at McKale Center cannot be compared to those of the last 40 years. Given UCLA’s transition from Steve Alford to the more intense and defense-first Mick Cronin, it’s going to be a while before those at McKale get a view of UCLA’s best shot.

But that’s a UCLA problem.

As much as anything else on Thursday, it became manifest that Miller’s sole intent before this season ends is for Tucsonans to see the best version of the Mannion-Green-Nnaji Wildcats of 2020.

“There’s so much at stake for players individually,” he said. “But what they don’t understand until it’s over, is that the respect in college basketball is always and has always been given to those teams and programs that win and thrive. The team success carries the individual players.”

Predictions? Arizona’s “fat and happy” days are gone. Miller’s 401st victory will be much more satisfying.

Arizona Wildcats 'revert' after Washington sweep, but hang on to beat USC 85-80 at McKale Center

The Wildcats took a 20-point lead early in the second half but it was cut to three in the final seconds.

Seen and heard from McKale Center, where the Arizona Wildcats beat USC 85-80 after withstanding a late Trojans rally.

One changed his immediate future.

The other changed the rest of his life.

Seven teams are within two games of first-place Oregon including Wildcats, who are a game back of Ducks.

Pac-12 roundup: ASU lights it up from long range to rout UCLA

Wildcats move within a half-game of Pac-12 lead with win over USC; Colorado, Oregon still on top

A look at the Pac-12 standings, Thursday night's results and what to watch for this weekend in conference play.

Sean Miller said he regretted not playing Max Hazzard more but Chase Jeter is last in line to play.

The two coaches battled on the court, in the press when they were at Xavier and Cincinnati.  Now that both are in the Pac-12, they're complementary of each other. 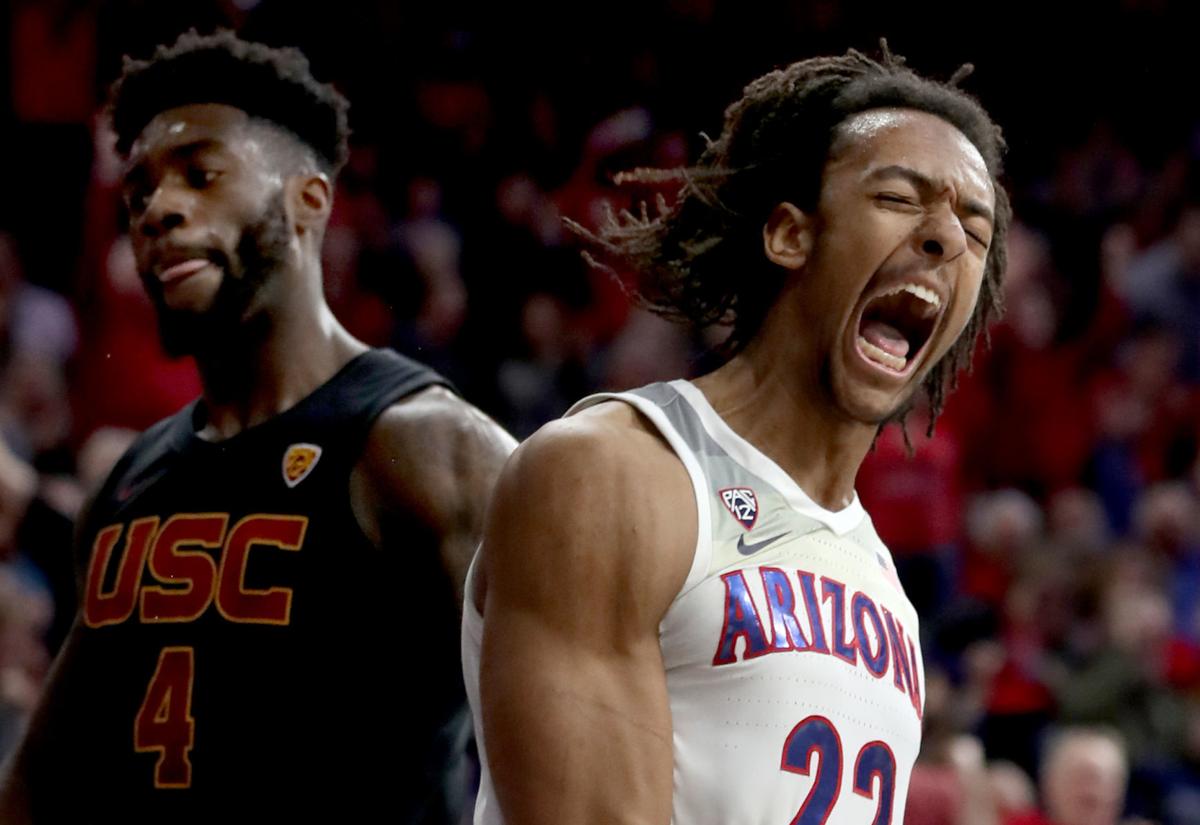 Arizona forward Zeke Nnaji lets go with a yell after slamming home a bucket over USC guard Daniel Utomi (4) in the second half of the Wildcats’ 85-80 win over the Trojans on Thursday. Said winning coach Sean Miller: “We didn’t play well, we didn’t play smart.” 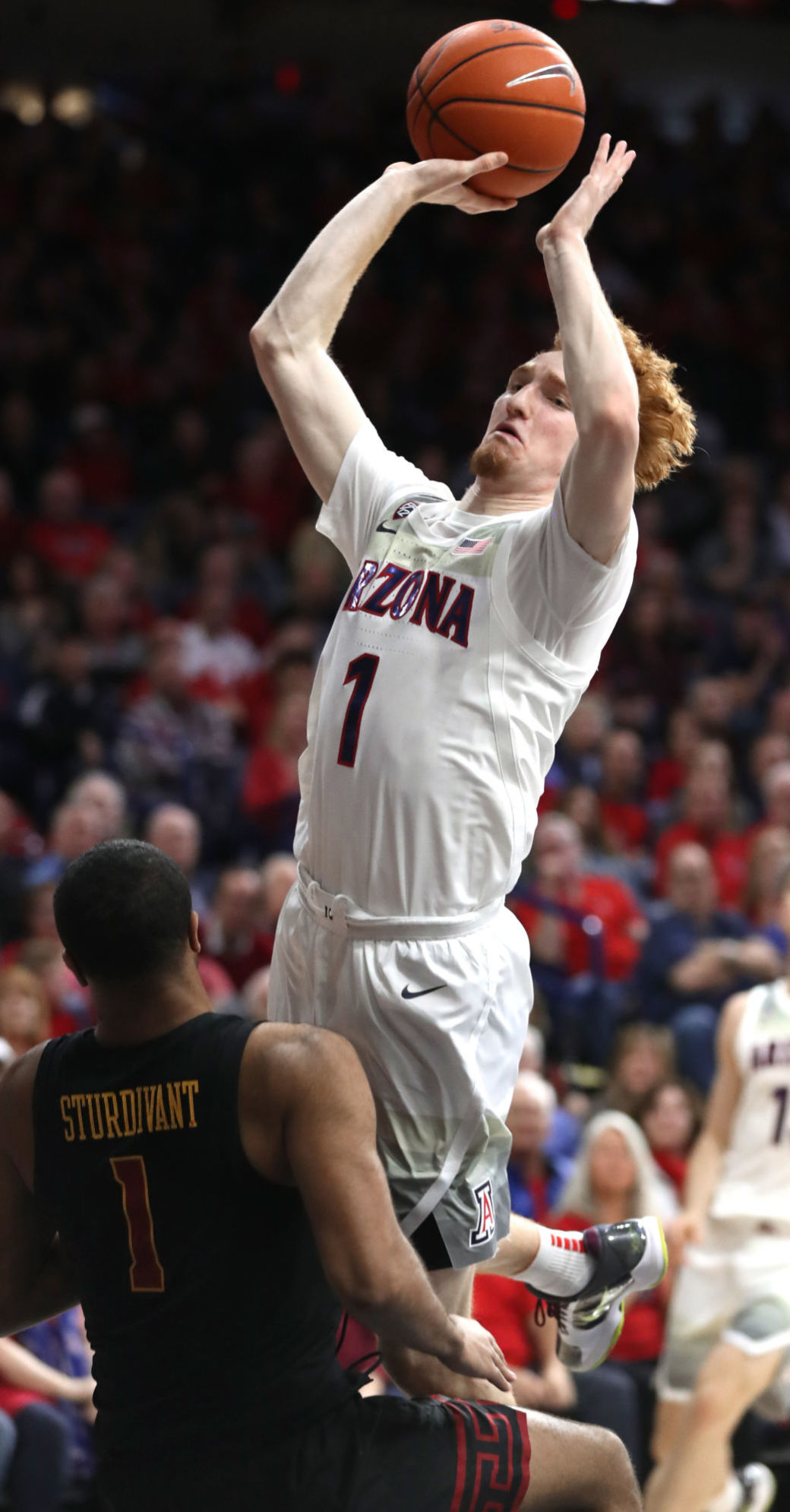 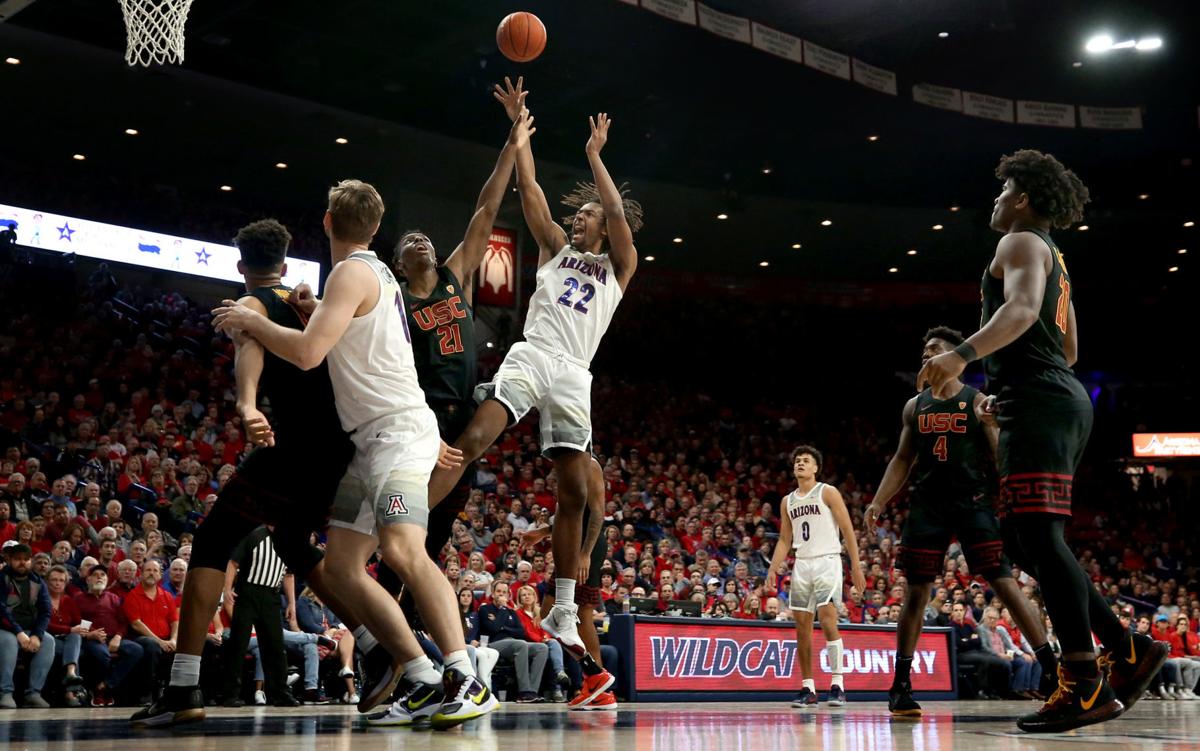 Zeke Nnaji (22) finds space to launch a jumper in the lane against USC. Defensive lapses and poor free-throw shooting by Arizona in the second half let the Trojans back in the game.