If you’re looking to save $5.95 when the college football magazines hit the newsstands this summer, I can tell you right now what will be said about Arizona: (1) the Wildcats will be picked to finish last in the Pac-12 and (2) no UA player will be placed on the all-conference team.

No one — not the sturdy Phil Steele and his must-read College Football Yearbook, not Athlon’s, not Lindy’s, not the Sporting News — will show faith in Arizona’s football program.

Every devoted fan of the football teams at Colorado, Utah, ASU and UCLA will run a finger down the 2021 schedule and stop when it says “Arizona.”

It hired a coach who has never played a down of football, not even in high school. “I was on the debate team,” Jedd Fisch says. “I was into forensics.”

This is not Kyle Whittingham, a burly, weightlifting linebacker who rides a Harley-Davidson to the football office at Utah, the son of Fred “Mad Dog” Whittingham, who played for the Raiders and the Rams and coached football for 30 years.

This is not Rose Bowl coach David Shaw, a standout receiver at Stanford, whose father, Willie Shaw, coached college and pro football for 40 years, becoming one of the most accomplished assistant coaches in NFL history.

Jedd Fisch’s father, Jeffrey, was a Manhattan attorney, a former tennis player for the Penn Quakers. His mother, Debby, a Rutgers grad, is a clinical psychologist who for 17 years had her own television show in New Jersey.

To say that Fisch can’t be successful because he is a nontraditional head football coach is like saying Bill Walton owes his television success to journalism school.

There is only one Power Five conference head football coach with the eclectic background of Jedd Fisch. That’d be Mike Leach, who has taken middlin’ schools Texas Tech, Washington State and Mississippi State to 17 bowl games in 19 years.

Leach never played a lick of football. He graduated from Law School at Pepperdine. Yet his coaching record is 143-97, a winning percentage of 60%, which meets the qualification standards for election into the College Football Hall of Fame.

This isn’t to say Jedd Fisch is going to be the next Mike Leach, but in his first three months as Arizona’s football coach, Fisch has been a working model for author Stephen Covey’s best-selling book “7 Habits of Highly Effective People.”

“Seek first to understand, then to be understood,” writes Covey.

Arizona’s previous four football coaches, from John Mackovic to Kevin Sumlin, rarely did any of those things. They belabored Arizona’s lack of resources. They didn’t interact with the campus or the community. They didn’t understand.

Fisch has already surpassed his predecessors in all of those categories. He is a comet of energy. He has embraced the campus. On Fridays, he plays tennis with UA men’s tennis coach Clancy Shields. On Monday, he produced a high-voltage, 95-second video that had nothing and everything to do with the growth of Arizona’s football program.

This isn’t a new approach inside the UA football program. In the early 1980s, Larry Smith — who rebuilt the program during an NCAA investigation and probation, ended ASU’s 20-year football domination and put Arizona on the national map — had his assistants take Dale Carnegie courses.

Dale Carnegie? He wrote “How To Win Friends and Influence People” in 1936. Jedd Fisch’s first 90 days on the job would make Carnegie proud.

I asked Fisch if, over 90 days, he stepped back and asked himself, “What am I getting into?”

“No, it was actually the opposite,” he said. “I like our personnel, and I feel we have a good opportunity to win here. I’m really impressed with how these guys have worked. The energy of a team and the effort the team puts in will get us wins.”

That’s not only out of the books of Dale Carnegie and Steven Covey but also out of the book of Dick Tomey. Arizona hasn’t won a game yet — it won’t get a chance to break that 12-game losing streak for another five months — but as it entered the first workout at spring practice Tuesday, it had won many of the little, off-field things that ultimately lead to winning football games.

Arizona hasn’t won at the little things for 20 years.

When Fisch was completing his high school education in New Jersey, he was determined to be a football coach. He wanted to model Steve Spurrier at Florida, whom he had never met.

He applied to enroll at Florida but was rejected. Instead of trying another school, he persisted.

“I called the admissions office,” he says. “Finally, I was told that if I reapplied, for summer school, I could enroll on academic probation and then have full status in the fall.”

He went to Florida, became eligible, met Spurrier, became a coach, all of which led to so much more. How much more?

Fisch attended the 2000 American Football Coaches Association convention in Texas. While there, Spurrier introduced him to Amber Mosley, who was a meeting planner for AFCA executive director Grant Teaff, the Hall of Fame football coach from Baylor.

Jedd and Amber hit it off, got married and have two young daughters.

You don’t have to be an Ohio State linebacker to do that, either.

Read all about Arizona's first spring workout of the Jedd Fisch era and check out photos from practice at Tucson.com/sports

The first of a five-part preview of the UA’s first spring practice session under new coach Jedd Fisch and his staff.

The second in a five-part preview of the UA’s first spring practice session under new coach Jedd Fisch and his staff.

The third in a five-part preview of the UA’s first spring practice session under new coach Jedd Fisch and his staff.

The fourth in a five-part preview of the UA’s first spring practice session under new coach Jedd Fisch and his staff.

The fifth in a five-part preview of the UA’s first spring practice session under new coach Jedd Fisch and his staff.

Arizona enters its final home weekend of the regular season  ranked No. 33 in the AVCA poll, hopeful that the NCAA reacts to requests to return next month’s tournament field to its original field of 64.

Notes and takeaways from the second UofA spring football practice under first-year coach Jedd Fisch and his staff. 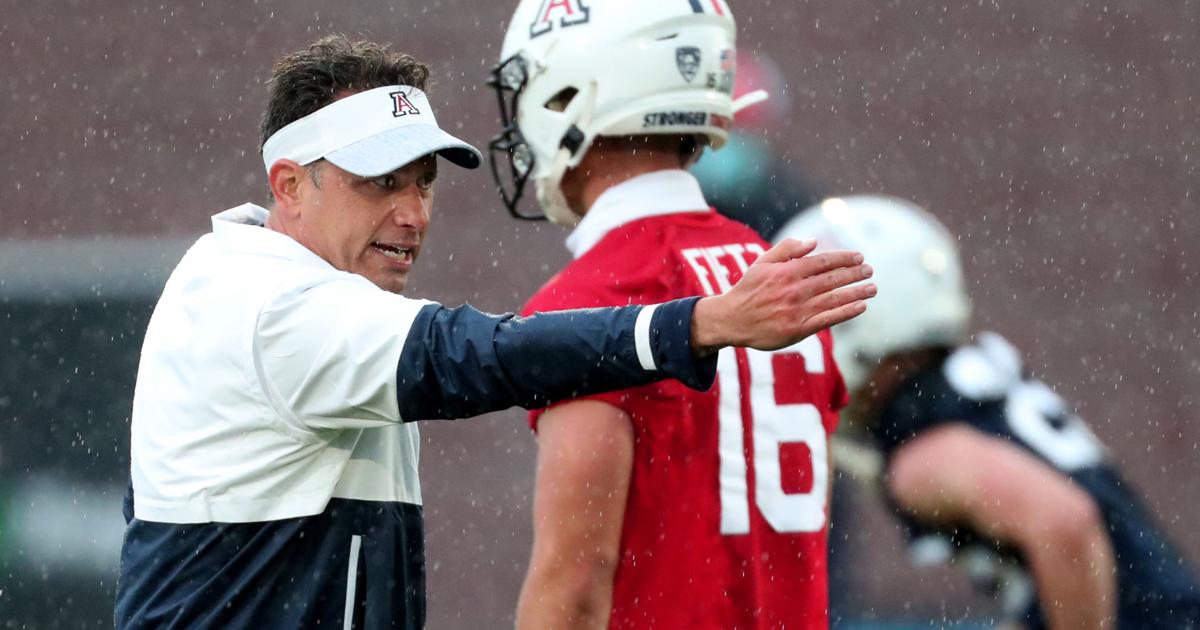 First-year head coach Jedd Fisch works a bit with the quarterbacks on the first day of spring practice for the University of Arizona. Fisch has taken over a program that has lost 12 straight games. 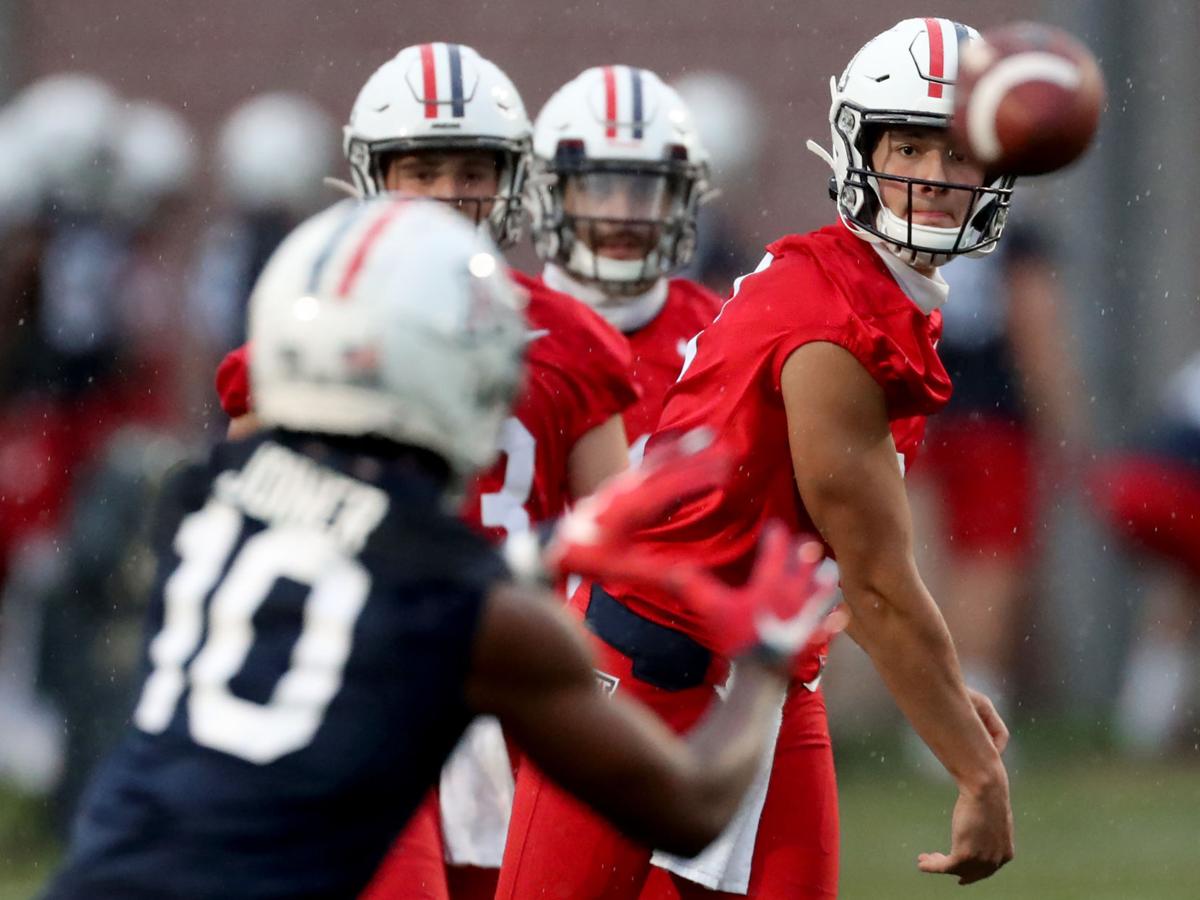 Quarterback Gunner Cruz watches his pass head to the hands of receiver Jamarye Joiner during drills on the first day of spring practice.