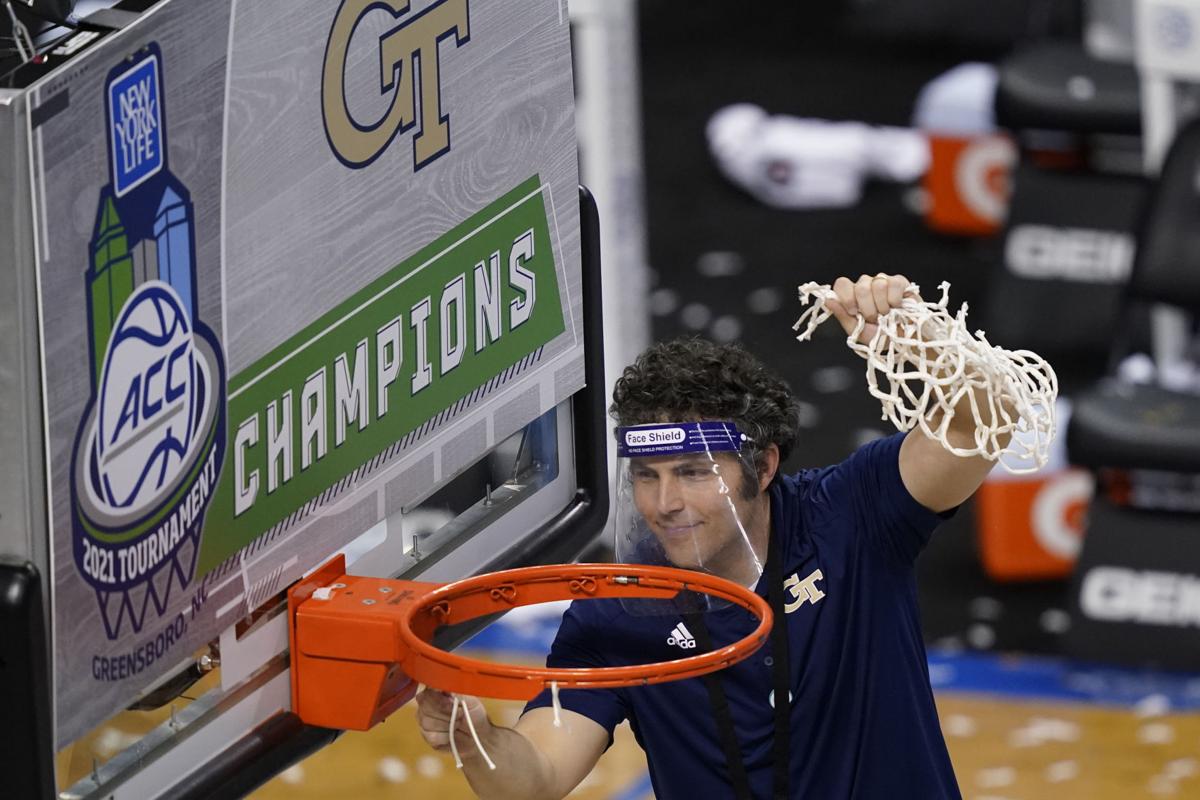 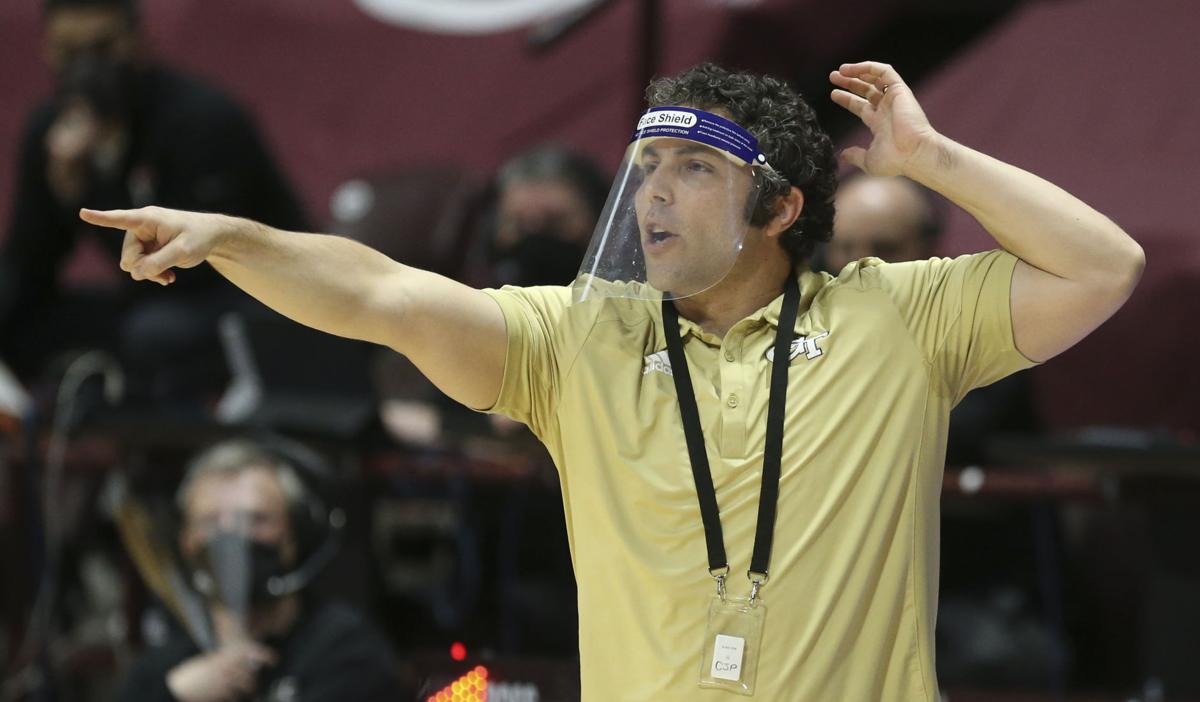 Josh Pastner’s Georgia Tech team opened the year with some rough losses, but ended up winning the ACC Tournament.

“Goodness gracious,” said the former Arizona Wildcat, “God bless everyone for sticking with us. Holy Toledo ...”

“We were so bad,” said Pastner. “We looked like we were out of it.”

Now, the Yellow Jackets are a No. 9 seed and will play Loyola-Chicago in the first round Saturday.

College basketball coaches are not all made from the same mold, and everyone who has closely followed Arizona basketball the last 25 years knows that Pastner is, shall we say, not your average Bobby Knight.

He doesn’t cuss. He doesn’t stomp and shout (at least not the Bobby Hurley version of stomping and shouting.) Pastner is a 43-year-old Boy Scout.

When Pastner’s Yellow Jackets beat No. 15 Florida State to win the ACC title Saturday night, he wore that silly face shield during an ESPN interview and the first thing he talked about wasn’t (a) himself or (b) his team. He talked about the coach of the team he has just beaten, Leonard Hamilton.

“I love Coach Hamilton, just love him,” he said. “He needs to be in the Hall of Fame.”

Josh Pastner, UA Class of 2000, has restored my faith in the follow-the-money world of college basketball. If it is permissible, I am going to quietly cross the journalistic barrier and become the Yellow Jackets’ No. 1 fan during this month of Madness. Lord knows, we can use a Cinderella story about now.

Lord knows there is no Tucson team to follow.

Three days after Arizona hired Sean Miller in April 2009, Pastner, then 31, was hired to be the head coach of the Memphis Tigers. Many Wildcats fans had long ticketed Pastner as a successor to Lute Olson, but the timing was all wrong. Kevin O’Neill fractured the lovey-dovey nature of Arizona basketball and Pastner fled for Memphis, where he joined John Calipari’s Final Four program.

Pastner wasn’t seriously considered to replace Olson or O’Neill if for no other reason than he didn’t seem to be ready.

He was only 30. Nobody gets hired to be a head coach at 30, not in college basketball, not unless you are Mike Krzyzewski, who was 29 when hired to coach the Army Cadets a million years ago.

Things soon changed. Calipari left Memphis for Kentucky and suddenly Pastner was working with one of the most blessed inheritances in the game. In his first five seasons as Memphis’ head coach, Pastner won 130 games and played in four NCAA Tournaments.

Could it really be that easy? Lute Olson didn’t coach in his first NCAA Tournament game until he was 45. Paster, the coaching prodigy from Houston, was 14 years ahead of Olson’s schedule.

Pastner got married and had three daughters. Alas, as life changed, so did his coaching status. Memphis faded from view. Pastner’s job security always seemed to be in the news. After two bland seasons in a mid-major conference, 2015 and 2016, the Boy Wonder and his storybook rise was cooked.

One thing about Pastner: his basketball instincts have always been spot-on. Before Memphis could fire him, he was hired to be the head coach at Georgia Tech.

He signed a five-year, $13.4 million contract and then dug in for the most difficult challenge of his basketball life — even more difficult than coaching under O’Neill, who basically ignored Pastner and treated him with disdain, essentially forcing a separation from his alma mater.

If you are at Georgia Tech, coaching basketball in the Atlantic Coast Conference is like coaching Vanderbilt football in the SEC. You are irrelevant. You don’t even get the Duke and North Carolina leftovers, because Florida State and Notre Dame get them.

Here’s how crazy difficult it is: In Pastner’s five seasons at Georgia Tech, he has played 31 Top 25 ACC opponents, including 15 ranked in the top 10.

By comparison, Arizona has played against nine Top 25 conference opponents in the same period, and just three ranked in the top 10. It didn’t look like Pastner would survive until his contract expires in the spring of 2023.

Worse, his team served a one-season NCAA postseason ban in 2020, a penalty for misdeeds committed by an assistant coach and a former friend from Oro Valley who went afoul of NCAA and civil rules and then dragged Pastner’s reputation through a long and sordid ordeal that ended with Pastner suing the ex-friend for defamation. (The case was settled in 2019, with no money changing hands.)

Pastner was cleared, but the Yellow Jackets were picked to finish ninth in the ACC preseason poll. That seemed about right.

But one day in December, I got a call from Pastner’s former UA mentor, Jim Rosborough, who had some promising news.

And for the next two months Rosborough, the long-time UA assistant coach, phoned with happy updates.

“My phone’s blowing up,” he said. “Josh won the ACC championship.”

To no surprise, Gronk opts to play another season with the defending Super Bowl champion — and his longtime quarterback, Tom Brady.

Greg Hansen: As he aims for state title No. 8, Salpointe's Wolfgang Weber is in a class of his own

Wolfgang Weber is pursuing career victory No. 699 Saturday. No other high school soccer coach in Arizona has even won 500 games.

Josh Pastner’s Georgia Tech team opened the year with some rough losses, but ended up winning the ACC Tournament.