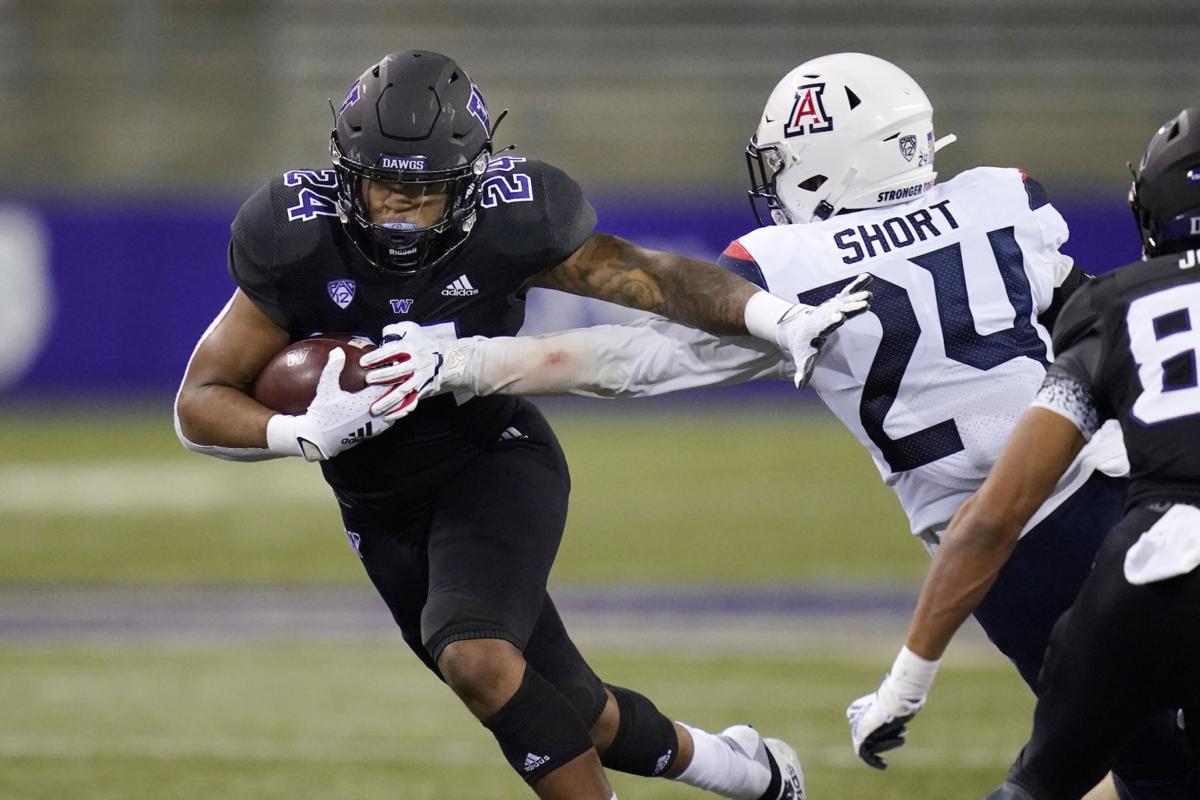 Washington’s Kamari Pleasant, left, pushes away Arizona’s Rhedi Short on his 21-yard touchdown run during the second half. Arizona fell behind 37-0 in the eventual 44-27 loss Saturday. 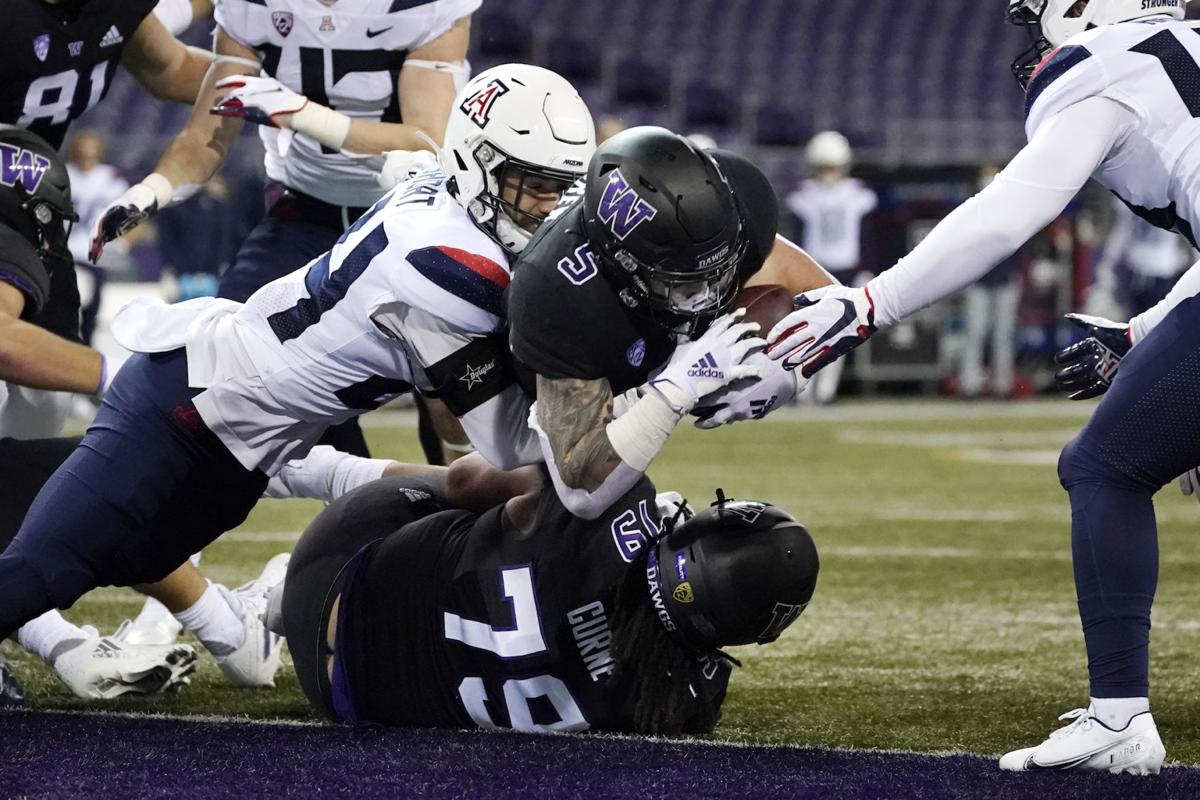 Washington's Sean McGrew (5) dives over teammate Victor Curne (79) to score against Arizona during the first half of an NCAA college football game Saturday, Nov. 21, 2020, in Seattle. (AP Photo/Elaine Thompson)

In the pandemic period of college football, the most benign term in in the game has become “no contest.”

It’s the operative phrase meant to define the implication of canceled games. No winner, no loser, no forfeit.

But on Saturday night in Seattle, Arizona went back to pre-pandemic times when “no contest” was the most indelicate term in college football. It meant you didn’t have — pick one — the energy, toughness, discipline, effort or execution to be competitive.

In a 44-27 loss to Washington, the Wildcats picked the wrong time to exhibit the lack of all five elements. No this. No that. No nuthin’.

Whatever gains Arizona seemed to make in a last-minute loss to USC a week earlier were lost and forgotten.

It was such a cringe-worthy performance that when the Huskies took a 30-0 lead early in the third quarter they had outgained Arizona 318 to 34. That’s a no contest in any era.

“Wait until you see the film of (tight end) Cade Otton blocking tonight,” Lake said in a Zoom conference. “He was just mashing guys all over the field.”

Consider Arizona mashed. About its only solace was that it outscored the Washington second-string 27-7 in the fourth quarter.

Part of Washington’s mash unit was Salpointe Catholic High School grad Matteo Mele, a sophomore center who didn’t give Arizona a sniff during the 2017 recruiting derby. Oh, how the Wildcats could use mashers like Mele, who is 6-feet 5-inches, 310 pounds, part of the exodus of five elite-level Salpointe recruits who chose to play college football elsewhere.

Said Lake: “When you’re able to pepper a defense over and over behind a massive offensive line, that’s a good recipe to wear people out.”

Also consider the Wildcats on the leaderboard in one of the least desirable statistical categories in college football. Here’s the current list of longest losing streaks:

Talk about being zipped, mashed and peppered.

The UA’s face-plant in Seattle has significant consequences. It gave the Wildcats a school-record nine consecutive losses, the most by a Wildcat club dating to 1899. You don’t just blow that off and say “it was an off night; we’ll get ‘em next week.”

Seattle seemed like welcome place for Kevin Sumlin’s team to break its oh-fer streak, especially against a club with a new coach, a new quarterback and no home field advantage, a rebuilding team that struggled to edge a not-so-powerful Oregon State team a week earlier, a game in which the UW benefitted from a controversial call near the goal line late in the game.

Beat the Huskies? Why not? It had some historic karma.

If you’ve followed the league the last few decades, you recognize that an 0-9 streak in the conference has little precedent with the exception of the epically bad Oregon State teams of the 1980s and 1990s.

Even the once-mighty Washington program went 0-15 from 2007-09. To get back to its 2020 level, where it mashes a team like Arizona, the Huskies had to go through a string of coaches: Tyrone Willingham, Steve Sarkisian and Chris Peterson.

It usually takes years to get it right after you go 0-9.

To be fair, it’s true that the pandemic has added to the UA’s record losing streak. The Wildcats were initially scheduled to play Portland State in September, which almost certainly would’ve stopped the losing streak.

But who knows? Kansas’ 11-game losing streak seemed like it would come to an end when it opened this season against little-known Coastal Carolina. Oops. The Jayhawks lost 38-23.

Saturday’s game turned on Washington’s successful conversation of a fake punt on the game’s first possession. Lake told reporters on Saturday that he had planned and schemed to drop that fake punt on the unsuspecting Wildcats all week.

Talk about walking into an ambush.

The fake punt established the Huskies as the aggressor and even though there were 56 minutes remaining, Arizona was unable to fight back until the Huskies’ back-ups were deployed in the fourth quarter.

Too little. Too late.

For Arizona, fighting back is all that remains of this abbreviated 2020 college football season.

What’s left? Stop the streak, regain a bit of dignity, don’t lose to Arizona State and don’t let Saturday’s humbling evening in Seattle continue to define a program that might’ve been better off stuck on the tarmac at the Tucson airport.

How the process or hiring and firing college basketball coaches has changed, in five easy pieces.

Greg Hansen: Tucson has known Mickelson for decades, and we still haven't gotten our Phil

Mickelson’s first golf competition in Tucson was January 1989, his freshman season at ASU, when he finished seventh at the UA’s annual Ping Invitational. He'll return Friday for The Match: Champions for Change.

Washington’s Kamari Pleasant, left, pushes away Arizona’s Rhedi Short on his 21-yard touchdown run during the second half. Arizona fell behind 37-0 in the eventual 44-27 loss Saturday.

Washington's Sean McGrew (5) dives over teammate Victor Curne (79) to score against Arizona during the first half of an NCAA college football game Saturday, Nov. 21, 2020, in Seattle. (AP Photo/Elaine Thompson)