Greg Hansen: Loss to bumbling Utes has sent Arizona Wildcats to the dark side
Share this
1 of 2 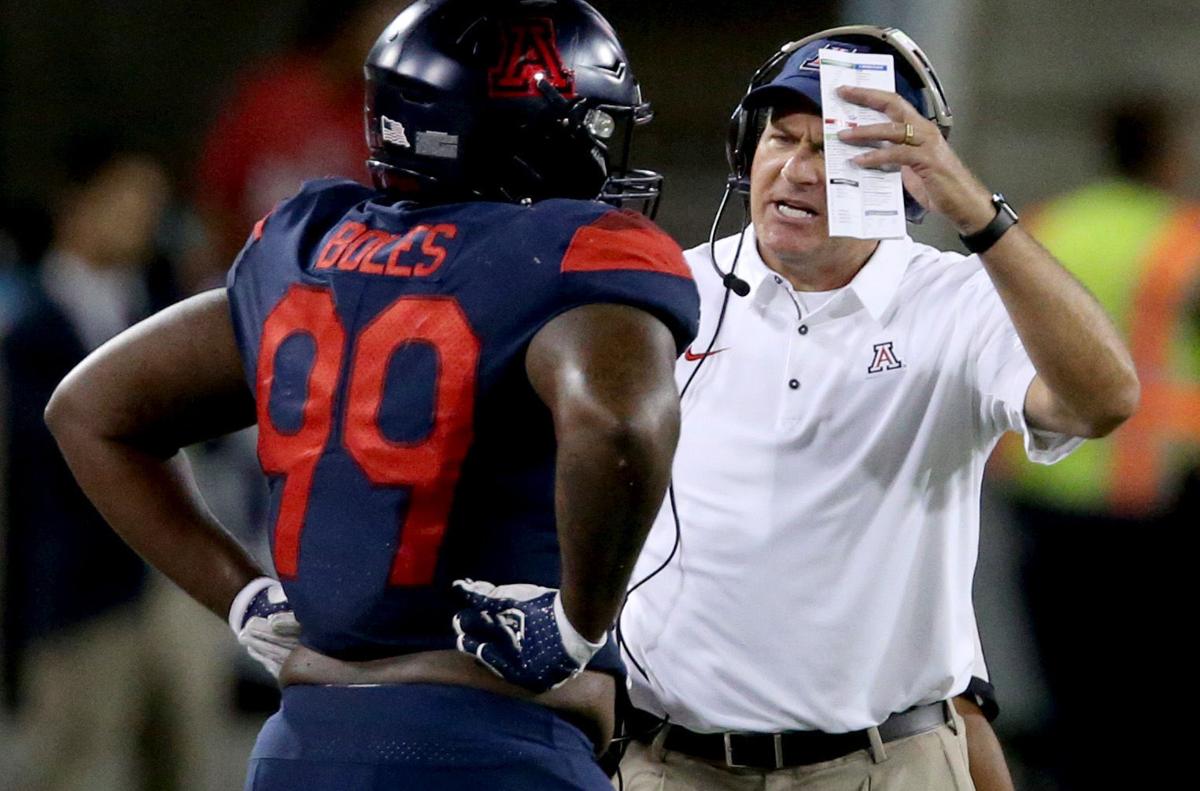 Arizona coach Rich Rodriguez has words with Dereck Boles after the defensive lineman picked up a personal foul in the fourth quarter. The Wildcats drew only 36,651 fans in the 30-24 loss to No. 23 Utah. 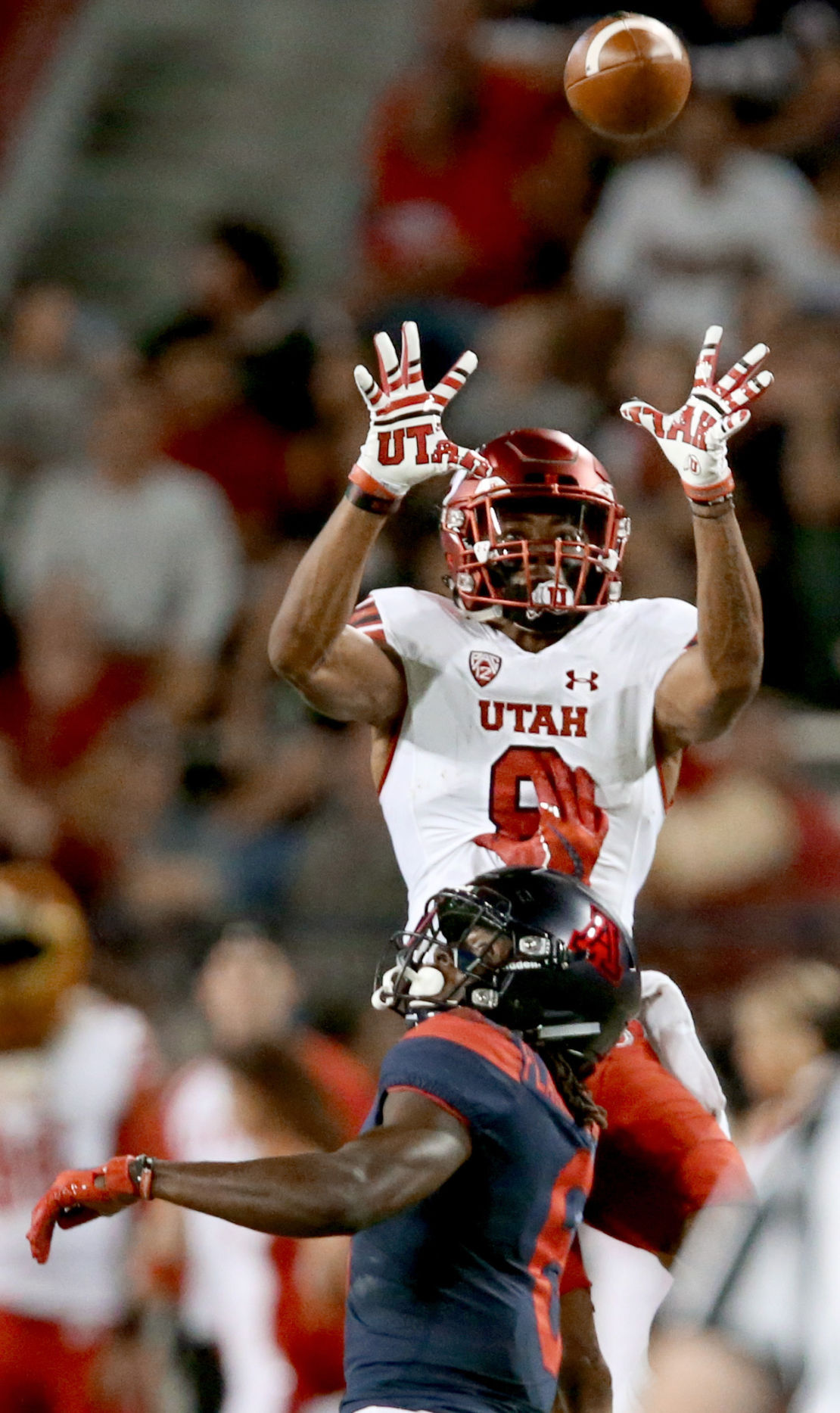 The Utah Utes, who are several Interstate 10 exits from football greatness, played like a piano player with a couple of broken fingers on Friday night.

Through three quarters, the Utes had lost their starting quarterback and their best defensive lineman to injuries. They had committed nine penalties (to Arizona’s one). One of Utah’s safeties was ejected for roughhousing, and a center’s snap on a punt attempt ricocheted off a blocking back’s helmet.

But the Utes kept doing what winning football teams do — chopping wood, or fighting on, or bearing down — and in the end it wasn’t Utah’s mistakes that made the difference at Arizona Stadium.

The Utes waited for Arizona to self-destruct and as if on cue the Wildcats coughed up what would’ve been a victory of some enormity for a program in need.

Arizona has now lost eight of its last nine Pac-12 games, but this one hurt as much or more than last year’s 69-7 loss at Washington State. It was like waking up on Christmas morning with two infected ears and a sore throat.

Utah won 30-24 on a night the Utes played as if unsure they were really a Top 25 team, looking more like a bunch of guys from the dorm than one nationally-ranked. Arizona played worse.

The first was a Brandon Dawkins pass that was returned 14 yards for a touchdown by Utah’s Javelin Guidry. That made it 27-17.

Arizona then attempted a field goal. It was blocked.

Finally, after the Wildcats recovered an onside kick, trailing 30-24 in the final 2½ minutes, Dawkins fumbled at the 20. Referees reviewed the play for three minutes as UA coach Rich Rodriguez stood on the 40-yard line hoping for a Hail Mary from the football gods.

When the call held, Rodriguez almost melted into goo. He shouted at side judge Bernie Hulscher and was assessed an unsportsmanlike penalty.

The way the Wildcats lost to Utah is going to linger because it isn’t often Arizona has a chance to win a Pac-12 game.

Those home games are against Oregon State, UCLA and Washington State. All of the rest are in enemy territory. It’s grim.

Arizona last drew a smaller audience in 1997 against Alabama-Birmingham (36,309). Before that, the UA had not drawn fewer fans since a 1985 game against Oregon.

On that night 32 years ago a mere 35,779 showed up at the stadium, although it carries an asterisk because then-UA coach Larry Smith suggested fans “stay home” after they booed lustily after the week’s previous loss to UCLA.

No one suggested UA fans stay home Friday. In fact, the school staged a Star Wars promotion. For most of the night, both Utah and Arizona played like R2-D2 on ice. Mistakes ruled.

It is entirely conceivable that when the Wildcats return from a road game at Colorado, scheduled to play UCLA on October 14, that Arizona Stadium will have its smallest crowd since it joined the Pac-8 in 1978.

Smallest crowd? In 1982, Arizona drew 35,599 in the season opener against Oregon State on a night it rained so hard and so long that one had to splash through a moat of water to enter the stadium.

On Friday it was clear and relatively cool when the UA-Utah game began. People stayed away in historic numbers. You could say UA fans have sent a message.

Such is the state of UA football, which has now lost 15 of its last 22 games.

For much of the first 2 ½ quarters Friday — just when you thought the Wildcats were on to something, just when the UA’s young and aggressive defense gave promise of good things to come — the Wildcats reverted to their 2016 form.

Whether Rodriguez changes quarterbacks now, or sticks with Dawkins, might not matter much. If Arizona can win even two Pac-12 games, matching last year’s finish, it might be a surprise.

Arizona outgained the Utes 448-341 and ran 18 more plays, but with the game on the line, Utah didn’t hit a couple of tee shots into the water, as Arizona did.

At game’s end, Utah’s players and coaches gathered in the southwest corner of the end zone and sang their school song in front of maybe 300 Utah fans.

One of the lines of that song is: “Our gang it is the jolliest that you have ever seen.”

By comparison, Arizona fans walked into the darkness.

The Wildcats lost their Pac-12 opener 30-24 to No. 23 Utah Friday and fell to 2-2. Arizona lost its third consecutive conference opener and fi…

The junior scored a career-high six touchdowns last week against UTEP. Utah, he learned Friday, is much better.

Pertinent factoids, words and numbers from the Cats' frustrating loss to the Utes.

You make the call: Check out the Star's grades for the Cats-Utes game and submit yours.

The ‘D’ has improved in multiple, tangible ways in its second season under coordinator Marcel Yates.

The Star's exclusive, in-depth look back at the Cats-Utes game and assessment of the program.

Letter: Re: the Sept. 23. article “Greg Hansen: Loss to bumbling Utes has sent Arizona Wildcats to the dark side”

I think you Mr. Hansen help a great deal in sending the Cats to the dark side.

Arizona coach Rich Rodriguez has words with Dereck Boles after the defensive lineman picked up a personal foul in the fourth quarter. The Wildcats drew only 36,651 fans in the 30-24 loss to No. 23 Utah.