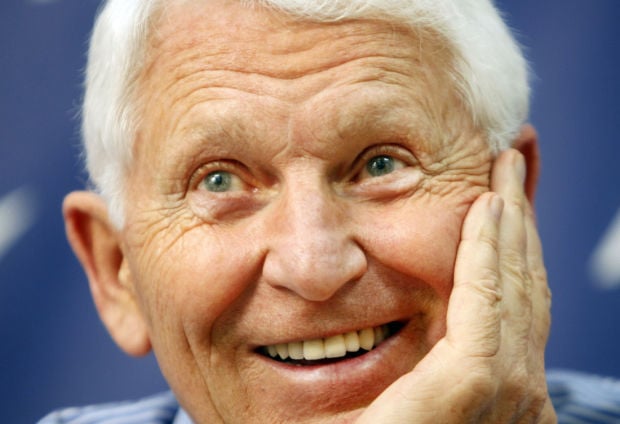 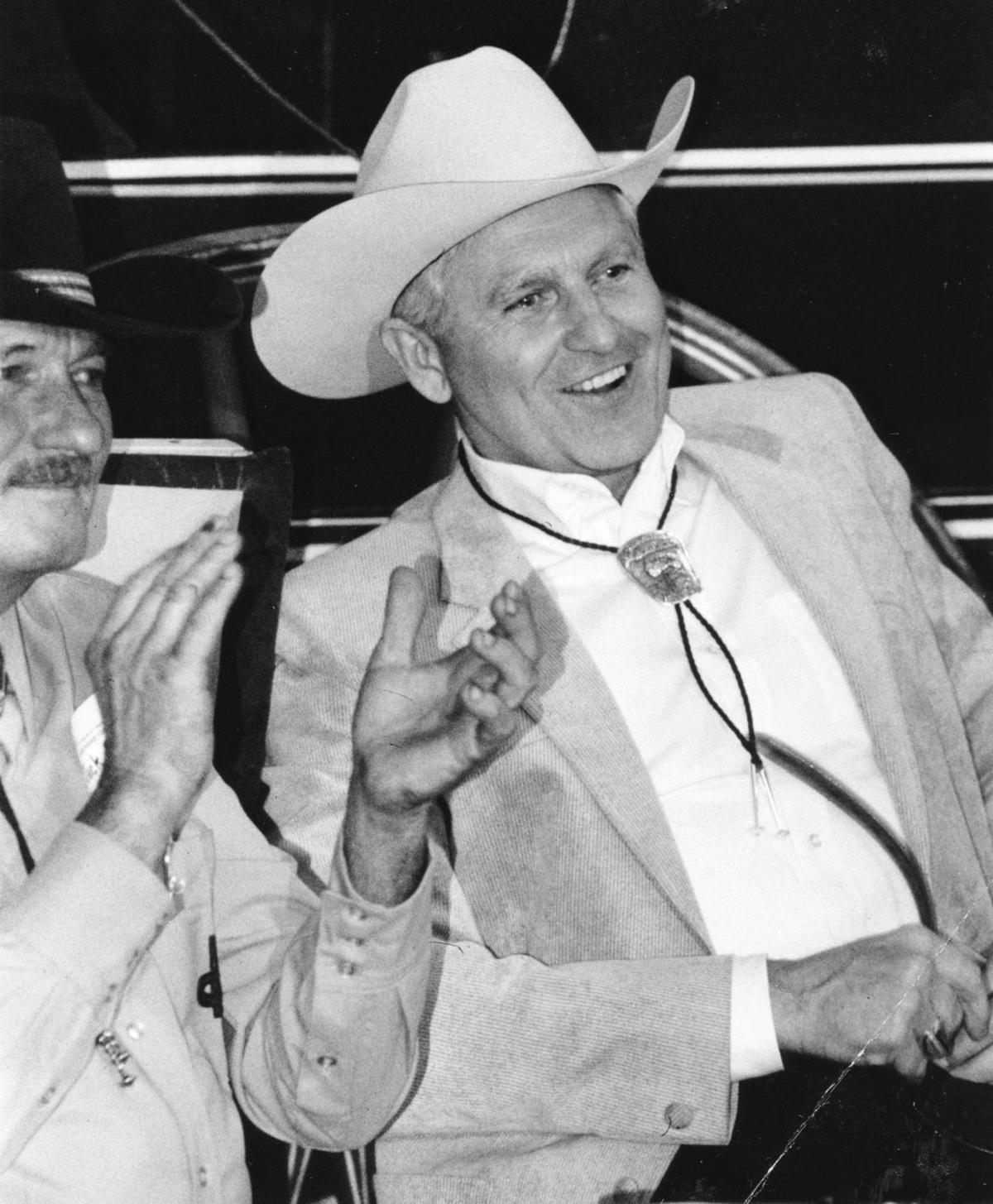 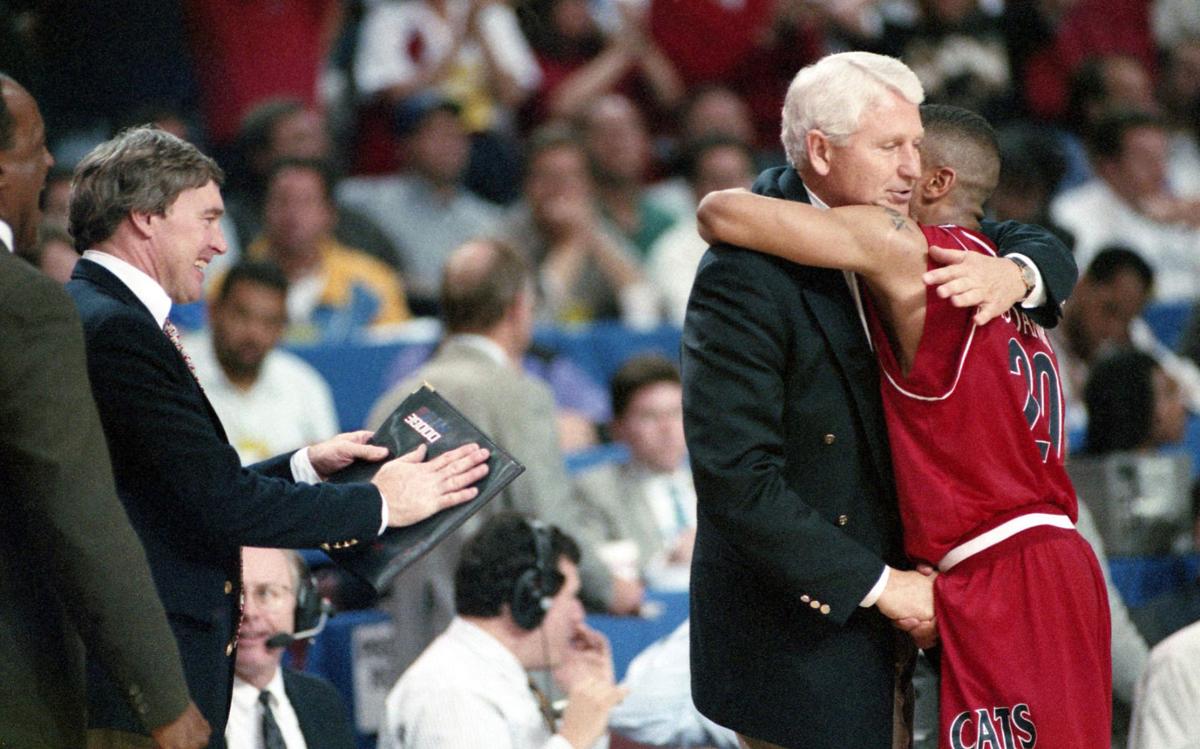 A few weeks ago, Lute Olson walked through a back door into Banner-UMC’s North Hills medical clinic and, as always, every head in the waiting area turned.

But this time is was different. He moved with the aid of a walker. His neck was encumbered by a brace that further limited his movement.

A woman sitting near me, with a full-blown sense of worry, said, “that’s not Coach Olson, is it?”

Olson has spent most of his 34 years in Tucson vulnerable to nothing but a referee’s blown call. But this time, the indestructible coaching legend looked every bit his 82 years. He had tripped in the night and hurt his neck; a day later he was using a walker.

He moved slowly through the waiting area as 15 or 20 people gawked. Nobody said a word.

The 6-foot-4-inch Olson, who for most of his Arizona coaching days looked like he could suit up and play tight end for the Green Bay Packers, is the most recognizable figure in Tucson history. His forceful nature and sustained success — his immediate visibility — helped to change Tucson’s self-image.

Through his coaching triumphs, we came to see ourselves as a city of winners.

Olson bought into Tucson from the beginning. He twice turned down overtures to be the head coach at Kentucky. He chose not to coach from a bunker and instead accepted invitations to speak at every conceivable event, big and small. He even agreed to be the grand marshal of the Tucson Rodeo Parade, smack in the middle of the basketball season.

A day after No. 1 Arizona lost to UNLV in the 1989 Sweet 16, possibly the most hurtful loss in UA sports history, I sat on a commercial airplane from Denver to Tucson a row behind Olson and his wife, Bobbi.

He spent the entire flight responding to fans who had written to him during the season. Lute would write a few words. Bobbi would address the envelopes.

So when he limped through a waiting room with a sore neck last month, 10 years removed from the last game he coached, it created genuine concern. In the first few days after I saw Olson at the North Hills clinic, 10 or 20 people asked me if I knew anything about Lute’s condition.

“How did you know he was hurt?” I would ask.

“Everybody knows,” they would say.

That’s the protective and caring sense Tucson developed and fosters for Olson. No one wants to let go.

But it always seemed like something was missing. Olson’s name is on the court at McKale Center, but it’s not enough.

Washington is unveiling a statue of iconic football coach Don James before an October homecoming game against UCLA. Unfortunately, James died in 2013. You wonder why the Huskies waited so long.

For whatever reasons, the UA moved slowly on the decision to construct a statue of Olson outside McKale Center. Three years ago, as a small booster group acted to raise funds for a proper monument to Olson, former UA President Ann Weaver Hart stalled; she was undecided. Once she became more aware of Olson’s significance, she gave her approval.

Impressively, less than five months on the job, athletic director Dave Heeke not only enlisted Steve Kerr to help a fundraising process, he also announced the statue should be completed before the 2017-18 season ends.

It will be a Very Big Day.

You don’t build a statue for someone who blew through town and had five or 10 memorable seasons. Tennessee recently erected a statue for basketball coach Pat Summit, an eight-time NCAA champion. She was able to take part in the unveiling long before she died last year. The Utah Jazz built matching statues of franchise all-stars Karl Malone and John Stockton; both men played at least 18 seasons in Salt Lake City. They didn’t wait until both men were generations removed from their glory years.

My alma mater, Utah State, built a statue of Merlin Olsen, a hometown hero who went on to become a Hall of Fame lineman for the Los Angeles Rams’ Fearsome Foursome. I stop by Olsen’s statue every time I go home. It always makes me sad.

The Aggies approved the construction of Olsen’s statue late in 2009. He died of mesothelioma three months later; the statue was not finished.

ASU unveiled a Pat Tillman statue at Sun Devil Stadium on Wednesday, more than 13 years after the 27-year-old was killed in Afghanistan.

Before Devils football coaching titan Frank Kush died this year, he was able to soak in the privilege of walking past his own statue.

And now there will be a statue of Lute Olson at McKale Center, built with money raised in part by Steve Kerr.

There will be a happy ending after all.

Greg Hansen and Star sports editor Ryan Finley talk about the UA's decision to build a Lute Olson statue, and which Wildcats legends may be next. Listen to The Wildcast podcast at Tucson.com/Wildcats and on The Wildcaster app, or download The Wildcast from ITunes and Google Play.

Here are some of the most memorable quotes from the legendary Arizona Wildcats coach.

The Arizona Wildcats have been a consistent presence in volleyball’s upper echelon for most of coach Dave Rubio’s 26 years in Tucson.

Arizona will unveil statue of longtime coach on Thursday.

Everything you need to know about Lute Olson's statue, Thursday's unveiling