With her voice cracking, Deifel said “I’m crushed for them … we’re just crushed this is the last day we get to work with them.’’

Over the last 35 years, no one has referred to Mike Candrea as “The Crusher’’ because, for one, that’s neither his style nor disposition. Yet no one in college softball history has eliminated more teams one step shy of the Women’s College World Series than Candrea.

A much smaller list is how often Candrea has been the crush-ee. What goes around comes around, even if you are Mike Candrea, even when you have coached more victories in Division I softball than anyone in history.

But on Saturday in Arkansas, the goes-around-comes-around chronicle was too much to ignore. On May 27, 2002, Cal Bears catcher Courtney Scott — now Arkansas coach Courtney Deifel — was full of angst entering the seventh inning of the WCWS championship game in a scoreless tie against Arizona.

In the top of the seventh, the Bears faced Arizona’s Jennie Finch, possibly the greatest softball pitcher in UA history. Put it this way: Finch had gone 32-0 a year earlier, pitching the Wildcats to the national championship.

But unaccountably, Cal scored six runs against Finch in that dreadful seventh inning. Scott was one of those who scored. It was the last game Finch would pitch for Arizona. She wept. She was crushed.

Now 19 years later, Candrea’s perspective has changed. It’s not all about winning, it’s about enjoying the journey.

“For a long time, I took these moments for granted,’’ he said Saturday. “This is a moment of time in my life I’ll never forget.’’

That statement hit the college softball world with some unexpected substance. Candrea has coached Arizona to 24 Women’s College World Series, winning eight of them. Now every step of the way is accompanied by a latter-day appreciation.

“I’m the gatekeeper,’’ he said. “If you really think about it, you’re here for a short time.’’

What softball program hasn’t he touched in his years at Arizona? If Candrea gives you his blessing, you’re good. And on Saturday, he gave Deifel and the Razorbacks his blessing.

“They’re going to be something to reckon with for a long time,’’ said Candrea, and although it didn’t ease the immediate pain felt by Deifel and her first-time SEC champions, Candrea’s words carry a lot of weight.

If he endorses your product, you’re good.

More to the point he also endorsed his product Saturday. “This senior class is the gold standard for a coach,’’ he said, not to be taken lightly. “It took me 37 years to put together a group of seven (seniors) like this to run the show.’’

What remains to be determined isn’t just if this will be Arizona’s ninth WCWS champion, but if Candrea will return for the 2022 season. His players and support staff have worn out the social media hashtag #4Coach and other variables. There was a similar placard in the Arizona dugout on Saturday.

It’s not difficult to figure out the meaning of the win-one-for-Coach Candrea narrative. Is this it? Will he retire after the WCWS in Oklahoma City? He has not signed a contract extension beyond the 2022 season and, sure, wouldn’t it be fitting to go out wearing an OKC BOUND winner’s cap as he did after Saturday’s victory?

Not all of his Pac-12 peers have been able to go out on their own terms.

When Candrea was first selected the Pac-10 co-coach of the year, 1987, the other honoree, Cal’s Donna Terry, died of hepatitis a year later. ASU’s two-time national championship coach Clint Myers was later fired by Auburn amid allegations of inappropriate behavior within the Tigers’ program.

But Candrea’s future is a story for next week or next month or next year. This week. it’s all about those in the dugout, those who left Arkansas wearing those OKC BOUND caps.

The first horse races held at what has also been known as Rillito Downs occurred Nov. 14, 1943.

College baseball recruiters didn’t consider Nogales High School’s Gil Heredia much more than a walk-on prospect in the spring of 1983, even th…

The Star columnist checks in to provide insight on what's happening in the Southern Arizona sports scene. Plus, a take on why the Arizona Wildcats baseball team has the makings of an Omaha-bound squad.

Former Arizona Wildcat has 14 points and 17 rebounds for the second-seeded Suns.

Win Thursday, and the 11th-seeded Wildcats will take on the winner of UCLA's opener against Florida State at 6:30 p.m. Friday in a game shown on ESPNU. Lose, and Arizona will play the Florida State-UCLA loser at 11:30 a.m. Saturday on ESPN.

The teams meet in Game 5 in Phoenix on Tuesday night.

After a year playing first base, Alyssa Palomino-Cardoza moved back to center field. It's "where I can be just the best version of me and where I feel the most comfortable," she says.

The latest news and notes as the Arizona Wildcats prepare to open Women's College World Series play on Thursday against Alabama.

Jennie Finch, at WCWS: Mike Candrea 'is like a second father to us all'

Jennie Finch and other Arizona Wildcats softball greats are in the stands for Thursday's Women's College World Series opener, supporting a coa… 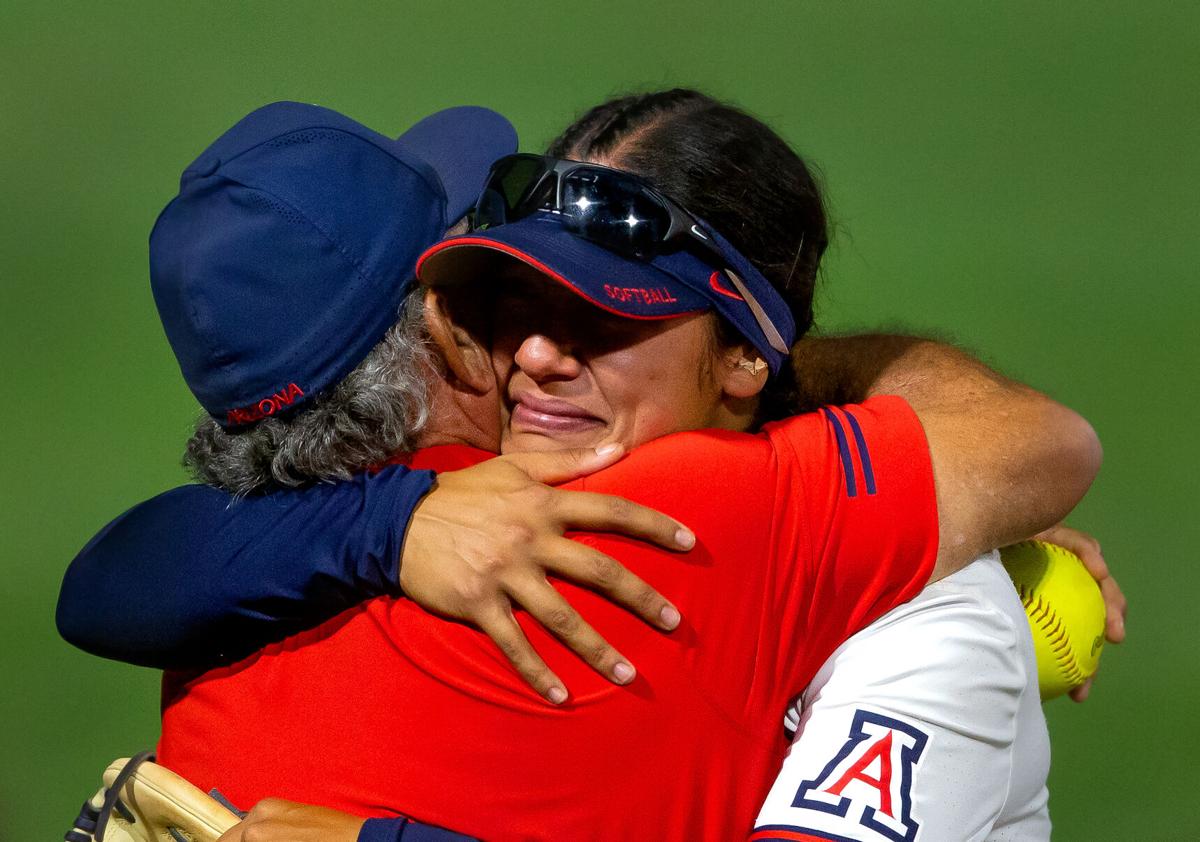 Coach Mike Candrea, hugging outfielder Alyssa Palomino-Cardoza after the win over Ole Miss on May 23, says he isn’t taking the Wildcats’ postseason run for granted like he might have in the past. 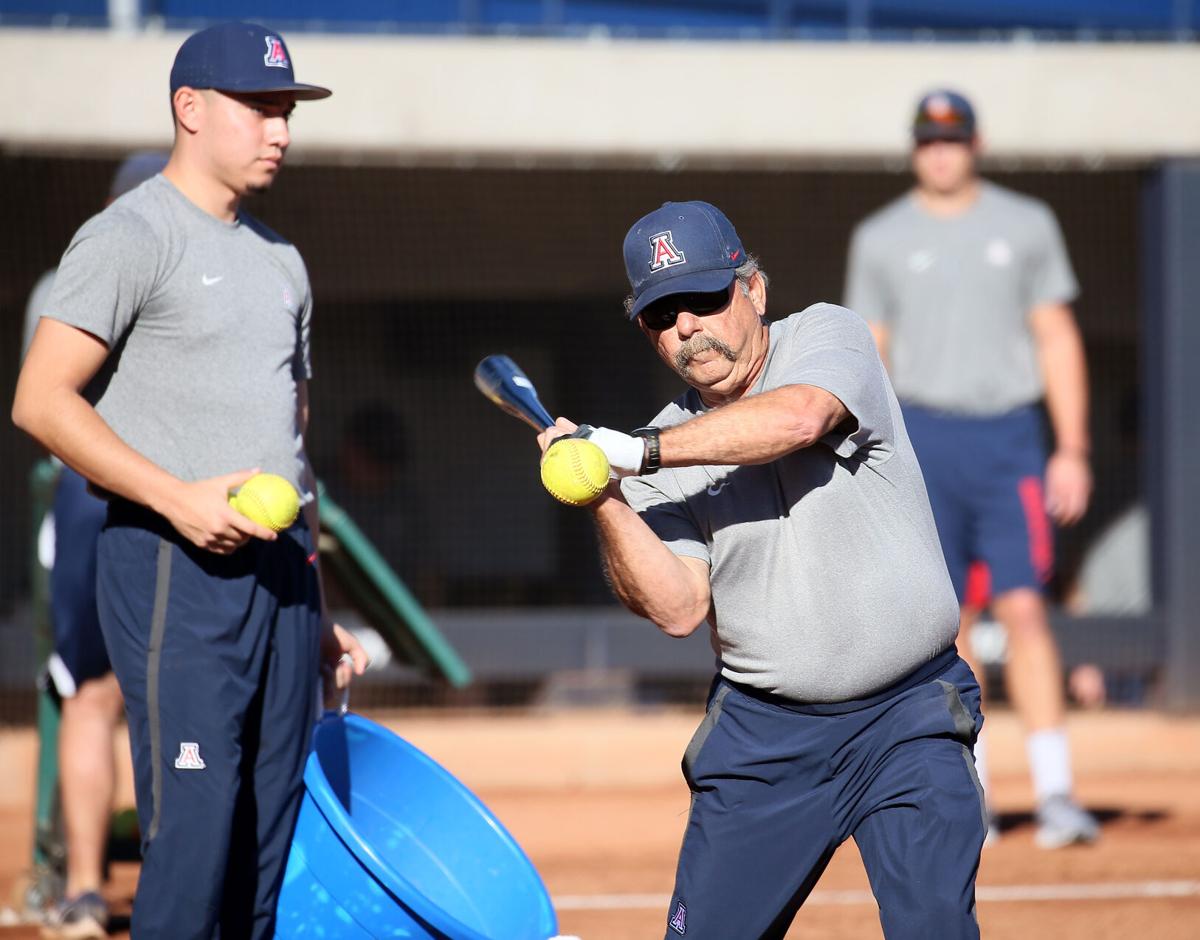 “I’m the gatekeeper,’’ said legendary UA coach Mike Candrea. “If you really think about it, you’re here for a short time.’’