A: Parker and Fina were coached and developed by Arizona offensive line coach Ron McBride from 1987-89, and Whittingham was hired by and developed under McBride, who was Utah’s head coach from 1990-2002.

McBride was in the process of signing the nation’s No. 1 offensive line prospect, Sahuaro High’s Mike Ciasca, in December 1989. That’s when Utah hired McBride to be its head coach. He soon hired Whittingham off of the Idaho State staff. If ever there was a disciple of Dick Tomey, it was McBride, a football man to the core, passionate, a father figure to his players and staff, the man who set the foundation for Utah’s move to national prominence.

A: Here’s the 100-win club of those who coached in the league across those 50 years:

Whittingham will be a first-ballot Hall of Famer someday soon. If he gets to the Rose Bowl, they’ll build a statue of him at Rice-Eccles Stadium and hold a parade in downtown Salt Lake City.

Dear Mr. Football: If the Pac-12 voted for an assistant coach of the year, who would you nominate?

Over the previous 10 seasons, Arizona’s defenses yielded an average of 34 points and 474 yards per game.

That’s a crazy-good improvement, especially given the young and inexperienced roster Brown inherited.

Dear Mr. Football: Did the celebration of Arizona’s victory over Cal quickly subside?

A: Thursday at 7 p.m., defensive line coach Ricky Hunley walked into a dark Stadium Club at Arizona, told he was to be interviewed there by the Pac-12 Networks.

When he turned on the lights, he was overwhelmed by the presence of his brother, two sisters, former UA teammates Randy Robbins, Jeff Kiewel, Julius Holt, UA basketball icon Bob Elliott, UA coach Jedd Fisch and others.

It was Hunley’s 60th birthday. Balloons were everywhere. So was cake. So were the tears in Hunley’s happy eyes. The best football player in UA history (my opinion) had a very happy birthday. It was a perfect cap to Veteran’s Day.

Hunley has proved to be one of Fisch’s best hires. He has mixed and matched six players — Mo Diallo, Trevon Mason, Paris Shand, Kyon Barrs, Leevel Tatum III and JB Brown — into a productive group with steady Jalen Harris, turning the defensive line a positive force, which has been the UA’s weakness since Ricky Elmore and Brooks Reed left school 11 years ago.

Dear Mr. Football: Why is it fitting that UA quarterback Will Plummer wear jersey No. 15?

A: After being injured twice against Cal, Plummer received medical attention in the locker room and returned to captain the UA’s fourth quarter rally to beat Cal. Fisch (and others) referred to him as “tough as nails.”

If you were to compile a list of the UA’s “tough as nails’’ football players the last 40 years, one of those included would be another No. 15, 1980s safety-quarterback Jeff Hammerschmidt, who was a lot like All-American safety Chuck Cecil, fearless and dedicated to winning. Hammerschmidt overcame ACL knee surgery and was a first-team All-Pac-10 safety.

Fisch this season awarded jersey No. 1 to receiver Stanley Berryhill and defensive end Jalen Harris based on toughness, leadership, dedication and academic achievement. Fisch might do well to create a similar process to awarding jerseys No. 15, No. 6 (Cecil) and No. 89 (Hunley) in the future.

Dear Mr. Football: Should the UA consider adding a “Tough as Nails” award to its annual post-season awards?

A: It should, and my nomination is that it names it the Adrian Koch Award. It would be a considerable honor to be linked with the former Desert View High School linebacker, who was among those in the stands at last week’s victory over Cal.

Or maybe it could be called the “Few Good Men” award.

After playing at Desert View, Koch enlisted in the Marines. He became an infantry sergeant, serving in combat in Somalia and Bosnia. He returned to Tucson in 1996 and attended a walk-on tryout at Arizona. But Koch, who was 5 feet 9 inches and maybe 175 pounds, was too small. He used the GI Bill to begin his education at Arizona.

Ever persistent, Koch added weight and strength and soon was added to the UA roster. And awarded a scholarship. Amazingly, by 1999, he made 22 tackles as a backup linebacker and special teams standout.

At the Camp Cochise training camp in 2000, Koch tore/reinjured his ACL and his career appeared to be over. But a few days later, he requested that trainers wrap his knee and brace it. He would tough it out. Koch had two weeks until the opener against Utah.

“We thought he was done,” said Tomey.

Instead, in the opener in Salt Lake City, Koch forced a fumble, picked up the ball and ran 10 yards for a clinching touchdown in a 17-3 victory. He started all 11 games that season, sharing starting LB duties with future NFL standouts Lance Briggs and Antonio Pierce. What were the odds of that?

One of nine children of a single mother, Susana Atkins, Koch has since been an educator and coach in Tucson. His name isn’t in the Ring of Honor, but few in UA history have honored the football program as Koch did.

A: The earliest kickoff at Arizona Stadium was 10:30 a.m. on Nov. 12, 1983 against Rose Bowl-bound UCLA, televised nationally by CBS. Arizona won 27-24 when Jay Dobyns, now the football coach at Tanque Verde High School, caught an 8-yard touchdown pass with 1:01 remaining.

A: The Utes have 28 former players listed on current NFL rosters. Arizona has five. More telling, the Utes have 15 NFL linemen or linebackers. Arizona? None.

That’s how well Utah has recruited and developed players the last 10 years, a period in which Arizona’s recruiting efforts went bust and, in turn, so did its football program. Recruiting beats coaching almost every time. Is Whittingham a better coach than, say, Mike Stoops or Rich Rodriguez? Probably not.

But Whittingham has steadily recruited better than both Arizona and ASU since the Utes entered the league 10 years ago. Until Arizona recruits better over multiple seasons, the Wildcats will be fortunate just to hang tight with the Utes.

Skid is over, but Jedd Fisch’s mission — to build Cats into annual contenders — hasn’t changed

Arizona will learn a lot about itself over the final three weeks, starting with a difficult matchup against No. 24 Utah.

Goals will be at a premium when the fourth-seeded Men in Black face top-seeded Union Omaha on Saturday afternoon with a spot in the USL League One finals at stake.

Greg Hansen: It was double the fun when Wildcats men, women opened season in McKale Center

The UA's first-ever men’s and women’s basketball doubleheader in 49 years ended with the Wildcats taking home a pair of wins.

The Star’s Michael Lev presents five storylines of interest as the Arizona Wildcats face Utah in the 2021 home finale on Saturday at Arizona Stadium. Kickoff is slated for 12 p.m. The game will air on Pac-12 Networks.

Picks against the spread, over/under for Arizona-Utah and other Pac-12 matchups

The Star's Michael Lev, Justin Spears and Alec White give their picks against the spread, over/under for Arizona-Utah and other Pac-12 matchups.

Field Pass: Everything you need to know about Saturday's Arizona-Utah game

Check out Saturday's depth charts and matchups, and see who reporter Michael Lev thinks will win when the Wildcats take on Utah on Saturday afternoon.

Tears, joy and appreciation are always a common theme when inductees share their success stories. 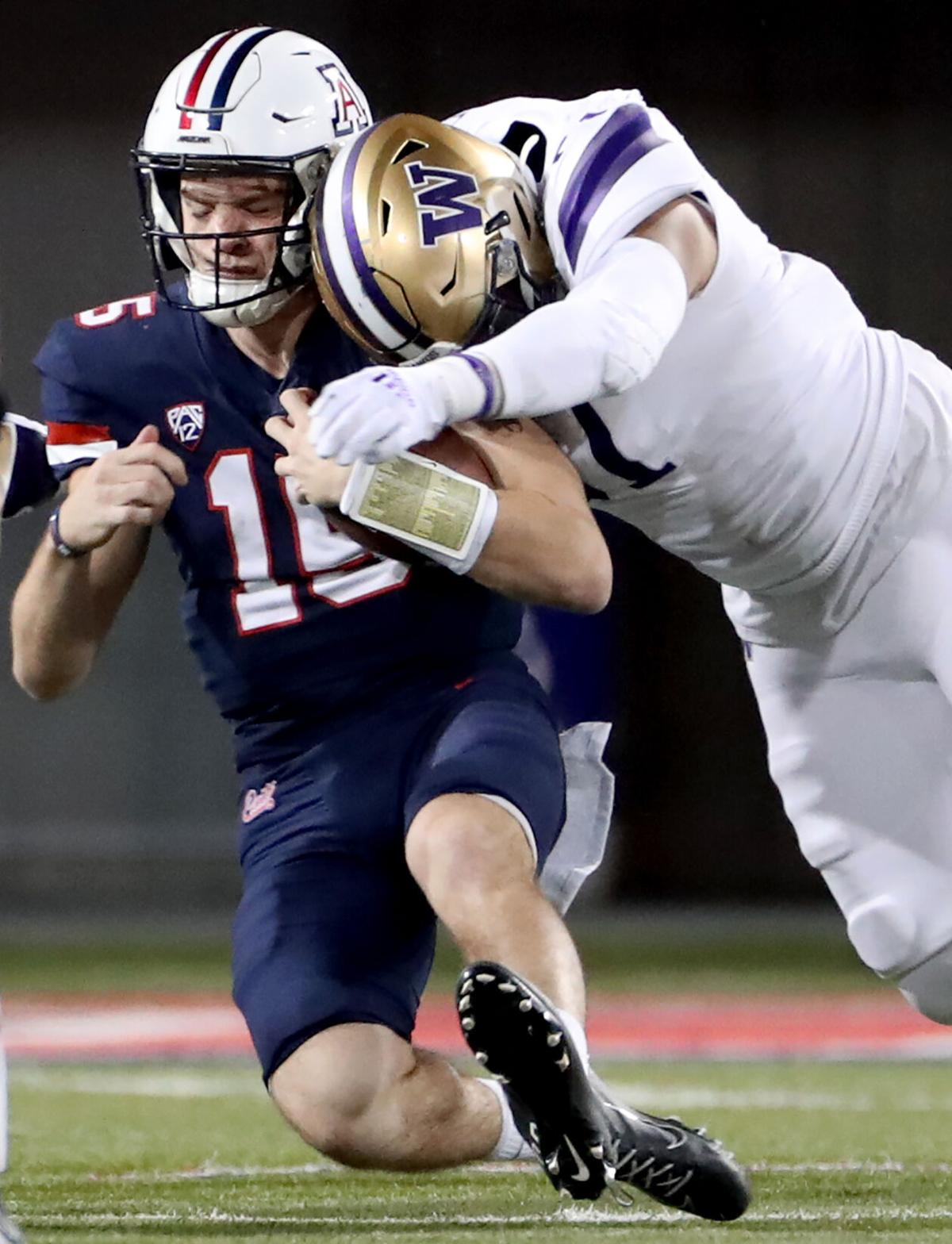 Arizona quarterback Will Plummer takes a big hit from Washington linebacker Jordan Lolohea following a scramble during their Oct. 22 game. 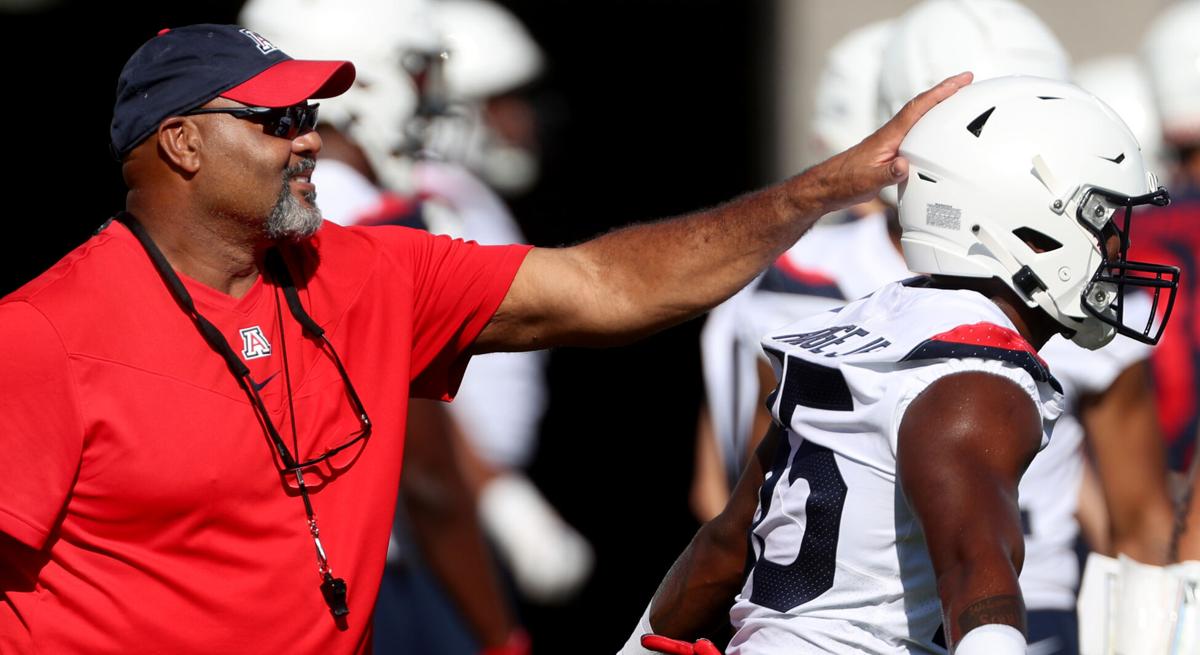