Looking for omicron: How long until variant is found in U.S.?

Dear Mr. Football: How can the UA make peace with a shrinking fan base after last week’s excessive entry delays and concessions shortages?

A: Let everybody in. Don’t check tickets. Call it the honor system. There’s a precedent at work: Two weeks ago, Arizona athletic director Dave Heeke said the school’s COVID-19 admission policy for fans would function on the “honor system.” No proof of vaccination required.

This would be the honor system Part II.

Allowing fans to enter the stadium without proof of tickets would have limitations. They could not sit in the Sands Club or press box loges. They would not be allowed to sit in the ZonaZoo or between the 30-yard lines. Signs would indicate what sections were available for freebie seating.

It would be a one-game, feel-good experience and, besides, how many walk-up, freebie fans do you think there would be for a team on a 14-game losing streak? Maybe 1,000 at most. If the conventional way of drawing fans doesn’t work at Arizona Stadium, why not do the opposite? It worked for George Costanza.

Dear Mr. Football: Is it possible Arizona will draw fewer than 30,000 fans — announced attendance, not occupied seats — for the first time since the stadium was expanded in 1976?

A: Fellow Power 5 football bottom-feeders Kansas and Vanderbilt, who both have broken double-figure losing streaks this season, hit unimagined depths.

Fans react to administrative slights, real or imagined. In 1985, after UCLA edged Arizona in a sold-out game with Rose Bowl implications, UA coach Larry Smith was roundly booed. When asked how it felt to be booed on his home field, Smith said: “If they don’t like it, they can stay home this week.”

And they did. A week later against Oregon, attendance plummeted from 57,779 to 35,292. That blowback from fans occurred to a UA team that would finish 8-3-1 and in second place in the Pac-10.

Dear Mr. Football: Was it too much to expect quarterback Gunner Cruz to play at a level that would’ve led Arizona to wins over BYU and San Diego State?

A: My first sense of caution came when Cruz told reporters last month that his wristband had a library of 150 plays. To that point, Cruz had thrown seven passes in college football.

He was surely overwhelmed. His offensive line is unsettled and unproven. Can you imagine how difficult it was for Cruz to go through his progressions — receiver to receiver — while sitting in the pocket, under constant duress? A defensive system like the one Brady Hoke runs at San Diego State was the last thing Cruz and the UA offense could handle.

And remember this: Until his senior season at Class 3A Casteel High School in Queen Creek, the defenses Cruz faced included a steady string of Globes, Paysons, Show Lows, ASU Preps and Valley Christians.

One reason the under-manned Smith and Dick Tomey teams had early success was because they played KISS — that’s Keep It Simple, Stupid. Those Wildcats teams won with defense, toughness, field position and remarkable field-goal kickers while building the roster.

Dear Mr. Football: Can a small-school football player like Cruz succeed in the Pac-12?

A: In 1995, Tomey drove to rural St. John’s to watch Marcus Bell in a wrestling match. Bell had led St. John’s High School to a 44-0 record and three state championships. Tomey was taken by Bell’s toughness. The a 6-foot, 2-inch, 215 pound linebacker wasn’t recruited by any Power Five schools.

Tomey gave Bell a scholarship. After redshirting in 1995, Bell became a tackling machine, sort of like Canyon del Oro’s Blake Martinez at Stanford, now a star for the New York Giants.

Bell became an All-Pac-10 linebacker, a fourth-round NFL draft pick, leading the league in tackles (10.3 per game) during the 12-1 season of 1998. His best game: 21 tackles in the epic Leap by the Lake comeback win over Washington in ’98.

Bell is by far the best small-school recruit of Arizona’s Pac-10/12 years. So don’t give up on Cruz yet.

Dear Mr. Football: Can an FCS school like NAU realistically hope to beat a Pac-12 team?

A: I would’ve said no a month ago, but then Montana stunned Washington in Seattle. Here’s the list of FCS victories over the Pac-12 the last 25 years:

There have been worse. I think the biggest stunner of the last 25 years was Arizona State’s 35-7 blowout loss to New Mexico State in 1999. The Aggies had lost to UTEP a week earlier and only finished 6-5. The Sun Devils had played in the 1997 Rose Bowl and had gone 25-10 the three previous seasons.

Dear Mr. Football: What is Arizona’s ceiling this season?

A: Defensive coordinator Don Brown has some useful pieces who are still being incorporated into the defense. San Diego State coaches were impressed by freshman safety Gunner Maldonado, a transfer from Northwestern; senior transfer defensive linemen Mo Diallo of Central Michigan and Leevel Tatum of Fresno State.

Breaking in a new system and so many transfers clearly hurt Arizona against BYU and San Diego State; installing a new scheme while teaching fundamentals can be stressful even to the UA’s capable defensive staff of Brown, Ricky Hunley, Chuck Cecil and DeWayne Walker.

There are some good bloodlines involved. Tatum is the nephew of one of the greatest defensive players in football history, Jack Tatum, a two-time national championship safety at Ohio State and Super Bowl champ with the Oakland Raiders. If Tatum, Diallo and Maldonado make steady improvement, Arizona should have a chance to win two or three Pac-12 games.

Dear Mr. Football: Would beating Arizona be the greatest victory in NAU history?

Hansen's new book is 25% off for Star readers

Greg Hansen's summer-long countdown series, "Hansen's Hundred," is now a coffee-table book, and readers of the Star can get 25% off the purchase price.

Preorder "Hansen's Hundred," which counts down the top 100 sports figures in Tucson history as chosen by the Arizona Daily Star's longtime columnist, by visiting pediment.com and searching for "Hansen."

Learn more about University of Arizona legends like Lute Olson, "Pop" McKale, Steve Kerr and more, and acquaint yourself with some of the unheralded sports heroes, trailblazers and characters of years past.

The book is a must-read for fans of Tucson high school sports, the Arizona Wildcats and even the city's long-departed pro teams. Featuring profiles baseball players, football players, basketball players, golfers, pioneers, visionaries, all manner of coaches and even an equipment manager and columnist, "Hansen's Hundred" captures what makes Tucson a thriving sports city.

Books will be shipped in time for the holidays.

Greg Hansen: Long lines, listless play made for an experience to forget at Arizona Stadium

If this isn’t rock bottom, what is? Thousands of fans were not in their seats in time to watch celebrity game captain Steve Kerr participate in the coin flip, which turned out to be the highlight of Saturday's loss to SDSU.

The Arizona volleyball team got back on the winning track Friday at the Wildcat Classic, sweeping UC Riverside and San Diego State at McKale Center.

Three things to keep an eye on when the Cats conclude their non-conference schedule at Arizona Stadium.

News and notes as the Wildcats and Northern Arizona square off at Arizona Stadium. 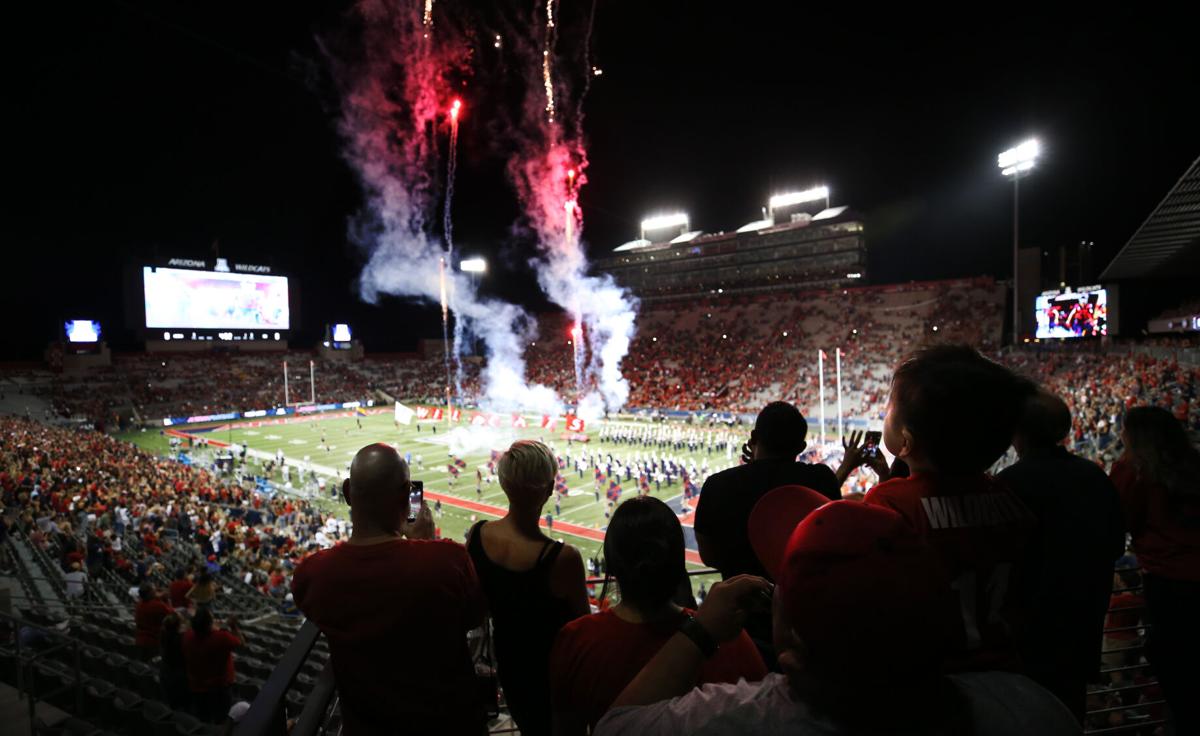 How could the Wildcats fill Arizona Stadium on Saturday night? Greg Hansen suggests the UA let in as many fans as want to attend the game against NAU without checking tickets. It'd be a change from last week, where COVID-19-related delays led many fans to miss kickoff. 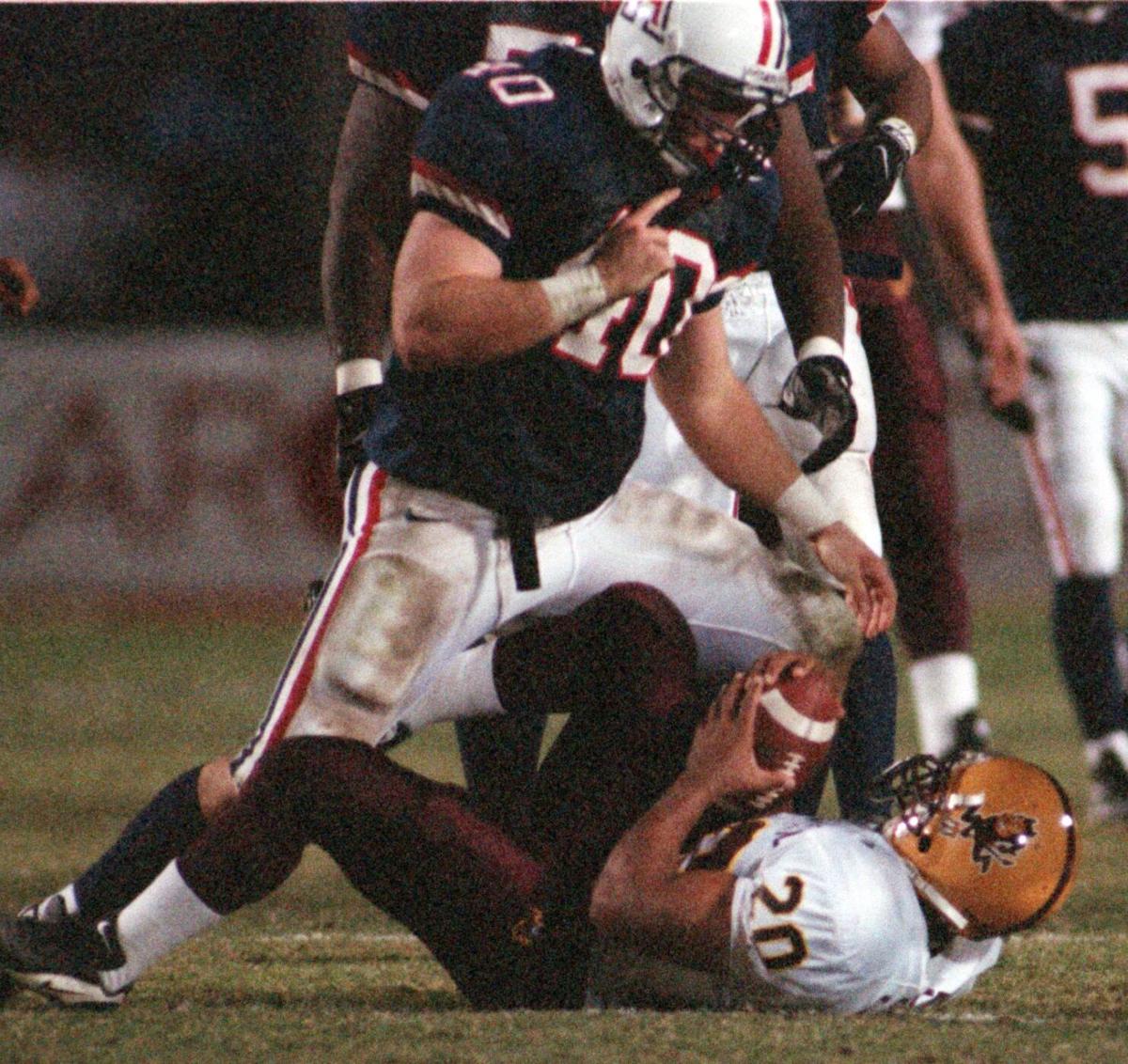 Marcus Bell developed from a small-town high school star to a UA standout linebacker in just a few years.