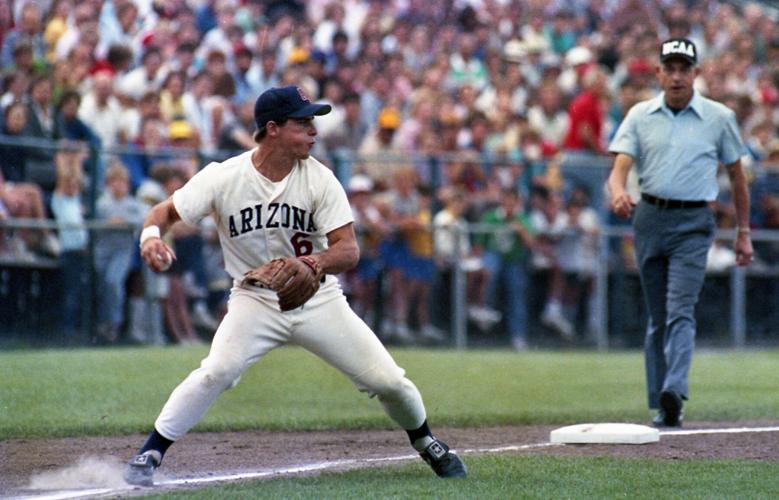 Chip Hale homered on the first pitch he saw as a Wildcat, and later led the team to the College World Series title in 1986. Monday, he was named UA's new head coach. 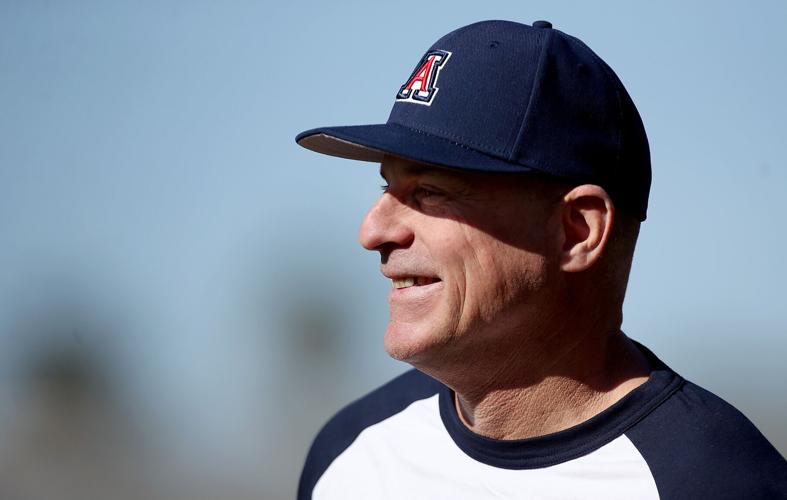 Chip Hale, then a coach with the Nationals, took part in the UA alumni game in 2018, a year before Washington won the World Series. Hale was the Tigers’ third-base coach until taking the Wildcats job Monday. 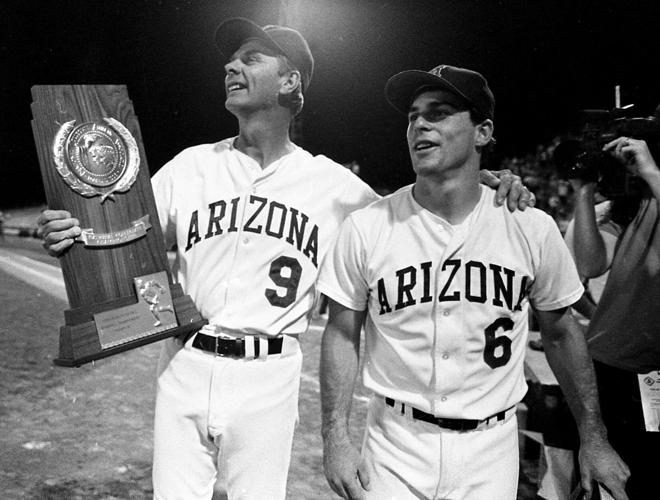 Chip Hale’s first at-bat as an Arizona Wildcat can be described in six words:

The freshman third baseman from the greater San Francisco area smoked a line drive down the right field line at Sancet Field, clearing the fence. The ball rolled onto Sixth Street.

The next day’s Star, Jan. 31, 1983, published a photograph of Hale being congratulated as he reached home plate.

A few days later, Kindall elevated Hale to No. 2 in the batting order, a spot he occupied for the next four seasons, playing in more games and getting more at-bats than anyone in school history.

Today, Hale is a rookie again. Sort of. Although he is 56 — although he played in 333 major-league games and has been coaching since USA Baseball hired him to be part of its organization 21 years ago — Chip Hale is finally the head baseball coach of his alma mater.

You wonder what took so long. Could you possibly find a better fit?

Two months after he left Arizona in the summer of 1987, Hale pocketed a modest $5,000 signing bonus from the Minnesota Twins, and quickly won the batting championship for the Class A Midwest League’s Kenosha Twins. At season’s end, he had a heart-to-heart talk with manager Don Leppert, a baseball whisperer for more than 30 years who didn’t gush about Hale’s .345 batting average but instead told him “you should get into coaching, that’s your future.”

It’s virtually the same thing Hale’s Triple-A manager Phil Roof of the Portland Beavers told him a decade later: “You should retire now and get into managing.”

And so, five years later, he did. After Hale sent his résumé to the minor-league directors of all 30 big league teams in 2000, the Diamondbacks hired Hale to manage the Rookie League Missoula Osprey. Over the next two decades, he managed or coached for the Diamondbacks, Nationals, A’s and Tigers. Although he twice flirted with college jobs — not at his alma mater, though — Hale pursued the UA’s opening the same way he pursued an Arizona scholarship 38 years ago.

This is a job that seems to have been made for Walter “Chip” Hale, son of a school district administrator from Contra Costa County in California.

Those who say he might struggle figuring out the recruiting system of college baseball have probably been misled about the dynamics of recruiting. Who could teach a young ballplayer more than Chip Hale about the road to the major leagues?

“Chip is the most inquisitive and organized person — man or woman — I’ve ever been around,” says former UA head coach Jerry Stitt, who was the Wildcats’ hitting coach during Hale’s Wildcat career. “He absorbs everything.”

An honor student at Arizona, winner of the school’s Tom Hansen Pac-10 medal as the UA’s top male student-athlete of 1986-87, Hale declined a congressional appointment to the Naval Academy to pursue baseball at what was then one of the NCAA’s five or 10 leading baseball schools.

It’s not that way now, but if anyone can get Arizona back to that level, Hale is that man.

“Chip was voted co-captain in both his junior and senior years; I’m not sure Arizona ever had a two-year captain before,” says his UA teammate Steve Strong, starting catcher on Arizona’s 1986 national championship team. “Chip is a cerebral guy, he has understood the pieces, the players and the dynamics from the get-go. He was always the first guy on the field and the last to leave.

“He’s got a huge network of contacts in baseball. The recruiting part of this won’t stop him for a second.”

It was a shock to the UA’s deeply-rooted baseball family that any coach would use Arizona as a steppingstone, as Jay Johnson did by leaving to coach at LSU 10 days ago.

Hale’s timing at Arizona has always been impeccable.

When he chose to play for the Wildcats in the spring of 1983, eschewing offers from USC, the Naval Academy and a football scholarship from NAIA powerhouse Linfield University of Oregon, Hale appeared to be stuck in line behind returning third base standout Jack Howell.

But Howell, who went on to play 10 seasons for the Angels, Astros and Padres, performed so well in the 1983 Alaskan Summer League that he signed a pro contract two weeks before Hale arrived in Tucson as a virtually unknown freshman.

“He wasn’t the biggest name we recruited,” Stitt remembers, “but with Chip it went beyond the typical five tools used to measure a baseball player. Chip was a little above average in all of the five-tool categories, but he had a sixth tool and a seventh tool and an eighth tool — his intangibles are off the charts. He has always been able to lead, lead, lead. He’s the same as a coach as he was a player.”

ASU and Oregon State, two of the Pac-12s leading baseball franchises, recently established a template of staying in the family, hiring former All-Americans as head coaches, men who had not coached a day of college baseball.

Hale, who wears a World Series championship ring from 2019 when he was Washington’s bench coach, is more widely known than OSU’s Mitch Canham and ASU’s Willie Bloomquist. Getting a foot into a recruit’s front door should not be an issue.

“I’ve spoken at a lot of clinics, small and large, in-state and on a national scale,” says Stitt. “The coaches and players always bring up Terry Francona and Chip Hale. They always ask who’s the best I ever coached. I tell them it’s Terry. And they always ask who’s the player that made himself better, got 100% of his ability. I tell them it’s Chip.

“I laugh at those who say he won’t be able to recruit. Once Chip gets in the living room with the parents and the kids, it’ll be a sealed deal. He’s definitely got the pedigree. He’s Mr. Wildcat.”

The Star's longtime columinist writes about why NCAA athletes deserve to earn money off their name, a tragic death by a Desert Swarm member and why there shouldn't be a rush to find Jay Johnson's replacement.

The Star's Greg Hansen is counting down the 100 top sports figures in Tucson history. Up next: No. 55: J.J. Hardy

Hansen's Hundred, No. 56: Burt Kinerk has been a part of almost every aspect of Tucson sports

The Star's Greg Hansen is counting down the 100 top sports figures in Tucson history. Up next: No. 56: Burt Kinerk

The Star's Greg Hansen is counting down the 100 top sports figures in Tucson history. Up next: No. 57: Roland LaVetter

The Star's Greg Hansen is counting down the 100 top sports figures in Tucson history. Up next: No. 58, Lacey Nymeyer John.

Jay Varady back as Roadrunners coach for second stint in Tucson

Varady, who guided Tucson to a 70-45-6-5 record and the 2020 AHL Pacific Division crown, is the only of four head coaches in the Roadrunners’ five-season history to lead the club for multiple seasons.

Chip Hale will make $500,000 plus bonuses in his first season as the Arizona Wildcats' baseball coach, with $5,000 escalators kicking in every year as part of his new, five-year contract.

The Star columnist explains why the Arizona Wildcats are better off with Chip Hale than Jay Johnson. Plus, a look at four golfers having summers to remember, Laura Ianello's national reputation and the UA adjusting to the NIL era.

Ex-Wildcat Terry Francona will miss rest of Indians' season, focus on his health

The 62-year-old Francona, an Arizona Wildcats legend, has been wearing a boot on his right foot all season after undergoing toe surgery for a staph infection in February. He's also dealing with a hip problem, which will require surgery.

Chip Hale homered on the first pitch he saw as a Wildcat, and later led the team to the College World Series title in 1986. Monday, he was named UA's new head coach.

Chip Hale, then a coach with the Nationals, took part in the UA alumni game in 2018, a year before Washington won the World Series. Hale was the Tigers’ third-base coach until taking the Wildcats job Monday.