Tyler Olvera of the Empire cheer squad flies against the evening sky. 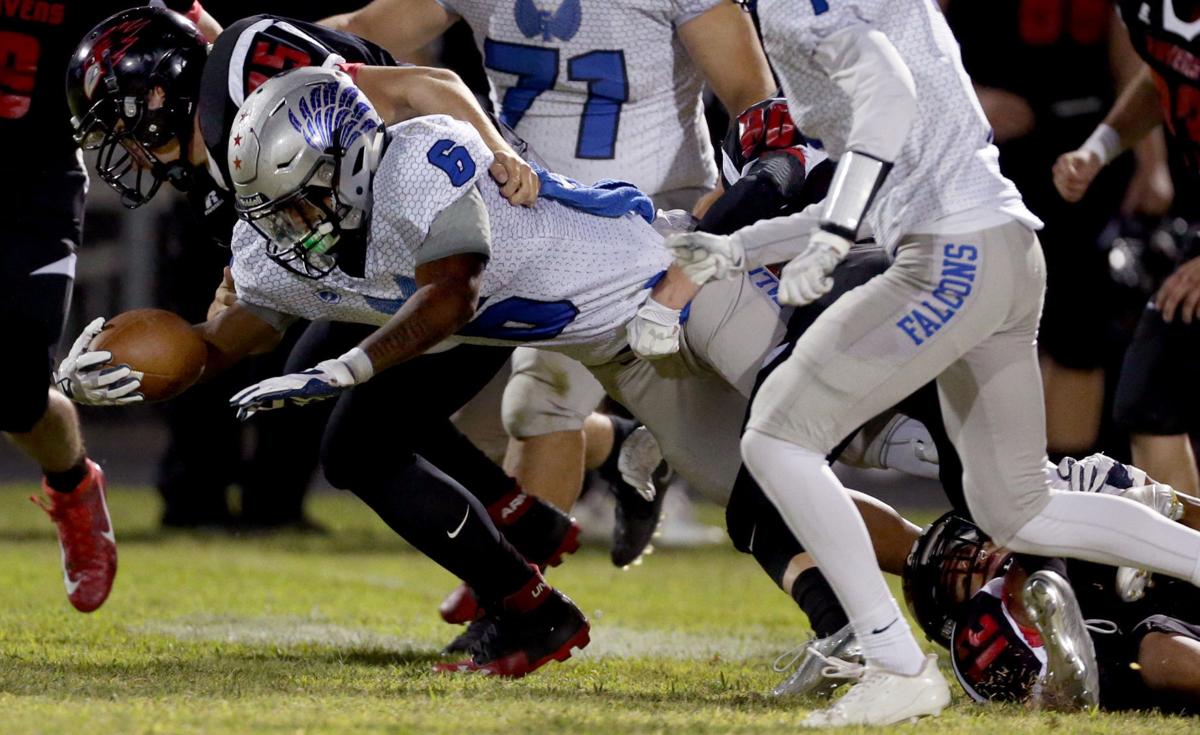 Arizona and UTEP drew 829,000 ESPN viewers for a game best described as blah, blah, blah. Why the relatively large audience? It was unopposed, the only Friday, Sept. 15 prime-time game on ESPN or Fox Sports 1.

A day later, San Jose State and Utah drew just 274,000 viewers on ESPN2. Why the small audience? It was opposed on other channels by prime-time games involving USC, Stanford, Arizona State, Cal and Clemson.

To network sports programmers — those who pay the Pac-12 about $500 million a year — Friday night college football is like stumbling onto the Lost Dutchman’s mine. It is untapped gold.

And so ESPN and Fox Sports 1 have embarked on a Friday night mining operation, beginning with Friday’s Utah-Arizona game and following with five more Pac-12 games. Next week’s anticipated USC at Washington State game could draw more than 3 million Friday viewers on ESPN.

Friday night used to be untouchable, the exclusive turf of high school football. But Arizona is playing on back-to-back Friday nights for the first time in school history.

“I don’t think anybody’s happy about it,” said Catalina Foothills coach Jeff Scurran, who has coached in seven state championship games. “I’m not blaming anyone at the UA, but most high school coaches see it as a threat.”

The Friday game of the week in Tucson prep football is Foothills at Pusch Ridge Christian, and the Lions, ranked No. 1 in Class 3A, are rolling. They’ve gone 42-9 since 2013 and if they don’t go 14-0 and win another state championship, it’ll be a surprise.

Pusch Ridge is one of the few teams in Tucson not worried about Arizona and the Pac-12 gobbling up the Friday night calendar.

“We hold about 1,000 people at our place, and it’ll be packed,” said Lions athletic director Lonnie Tvrdy. “Our atmosphere in football is fantastic, sort of like a Mayberry RFD in a big city. It’ll be homecoming, and we’re actually worried about where we can put all of the band members from Foothills. It’s almost like a Midwest football experience here.”

Arizona vs. Utah on TV?

“It won’t be a factor,” said Tvrdy. “To our community, this is a bigger deal than UA football, but I know it’s a factor elsewhere.”

Unlike Tucson high school football from 1940-2000, when Friday night football was a Very Big Deal, Pusch Ridge is an exception. Now only the Lions, Salpointe Catholic, Cienega and Ironwood Ridge regularly revel in the Friday Night Lights experience.

Numbers are down. Crowds are almost nonexistent at many TUSD schools. Now a normal size high school football roster in Tucson is about 35 players. It wasn’t long ago it was 60 or 70.

Santa Rita, which Scurran coached to back-to-back state championship games a decade ago, was unable to field a team for its opener against Florence. It was outscored 580-77 a year ago.

“Look at the one-sided scores on Friday night,” Scurran said. “How many competitive games do you see? When the AIA reclassifies teams this year, it’s possible you’ll see several Tucson schools drop football.”

From about 1995-2010, Friday night football at Sunnyside was a community event of note. Available seats were coveted. But as participation numbers in high school football fell, so did the Blue Devils. The problem is that Sunnyside’s enrollment of about 2,400 places it in the wickedly competitive, Phoenix-fueled Class 6A.

Sunnyside should more properly play in Class 4A, where it could be more competitive, but the AIA goes strictly by enrollment figures. It’s sad. A successful Sunnyside football program was good for Tucson, and great for the self-image of the south side.

Now the Blue Devils struggle to win and to earn a few needed dollars at the box office.

That’s why Pusch Ridge’s rise to prominence is such a compelling story. The Lions have about 350 students but chose to “play up” a classification, into 3A. And it also schedules Foothills, a 4A school whose enrollment is close to 1,600.

“Unlike the bigger Tucson schools, we had to travel all over kingdom come to play a 2A football schedule,” Tvrdy said. “We’d be in Tombstone, Thatcher, San Carlos, Morenci. It wasn’t making us any better. We really only have 20 players who are in the mix, who see the field regularly. But they are 20 good players, veterans of our (2015) state championship. We’re in a good spot right now.”

The regular season begins much too early (Aug. 19 for many teams) and ends before Halloween.

“We’ve had one practice so far when it was under 100 degrees,” Scurran said. “The kids have to come back from summer vacation to practice too soon. Why are we making it so hard on everybody?”

In the last 10 years, more kids have opted out of football because of the fear factor: fear of CTE, fear of getting hurt, fear that football is so consuming that it prevents you from playing basketball or baseball.

“It’s not the norm for kids in our society to want to dedicate a month of their summer vacation weightlifting, and then do it three times a week when the season is over,” Tvrdy said. “We’re OK because our kids and our coaching staff have created a positive environment. But others haven’t been as fortunate. Numbers are down everywhere.”

Now the numbers-driven Pac-12 and its TV partners are making it even more difficult for high school football to keep the lights burning.

The next Scooby? Arizona Wildcats freshman LB Colin Schooler just wants to be the best version of himself

The freshman linebacker has drawn comparisons to the UA All-American but knows he has a long way to go to live up that standard.

The Wildcast, Episode 12: How Utah leapfrogged the Wildcats in the Pac-12

Greg Hansen and Ryan Finley discuss how Utah has positioned itself as a contender in the Pac-12 South, why Polynesian prospects want to play f…

The Wildcast Episode 12: How Utah leapfrogged the Wildcats in the Pac-12

Greg Hansen and Ryan Finley discuss how Utah has positioned itself as a contender in the Pac-12 South, why Polynesian prospects want to play f…

Arizona Wildcats DE-LB DeAndre' Miller will not play vs. Utah; TE getting thin

The senior pass rusher will miss his fourth straight game while recovering from a foot injury.

Greg Hansen: Fridays are for football ... but who should play?

Greg and Ryan talk about why the Wildcats are playing on Fridays, and which high school programs are affected by the weeknight game.

Watch: Wildcats will be tested in Pac-12 opener vs. Utah

Ryan and Greg break down why Utah has frog Arizona in the Pac-12 power rankings.

Here's a quick look at the top 10 passing leaders around Southern Arizona through Friday, Sept. 15.

Here's a quick look at the top 10 passing leaders around Southern Arizona through Friday, Sept. 15.

The high school football season is reaching the half-way point. This week is filled with potential matchups that could make Friday night the b…

The high school football season is reaching the half-way point. This week is filled with potential matchups that could make Friday night the b…

Arizona Wildcats hot sheet: On Nathan Tilford being ready to shine, Jack Banda switching to offense and status of QBs

What to watch for when the Arizona Wildcats host No. 23 Utah

Three things to look out for in the Cats-Utes game, plus a score prediction and preview links.

Welcome to another exciting Friday night of high school football in Southern Arizona. Scroll down for the Star's live fan chat to get the late…

Notes and takeaways from warmups before the Cats-Utes clash at Arizona Stadium.

Tyler Olvera of the Empire cheer squad flies against the evening sky.