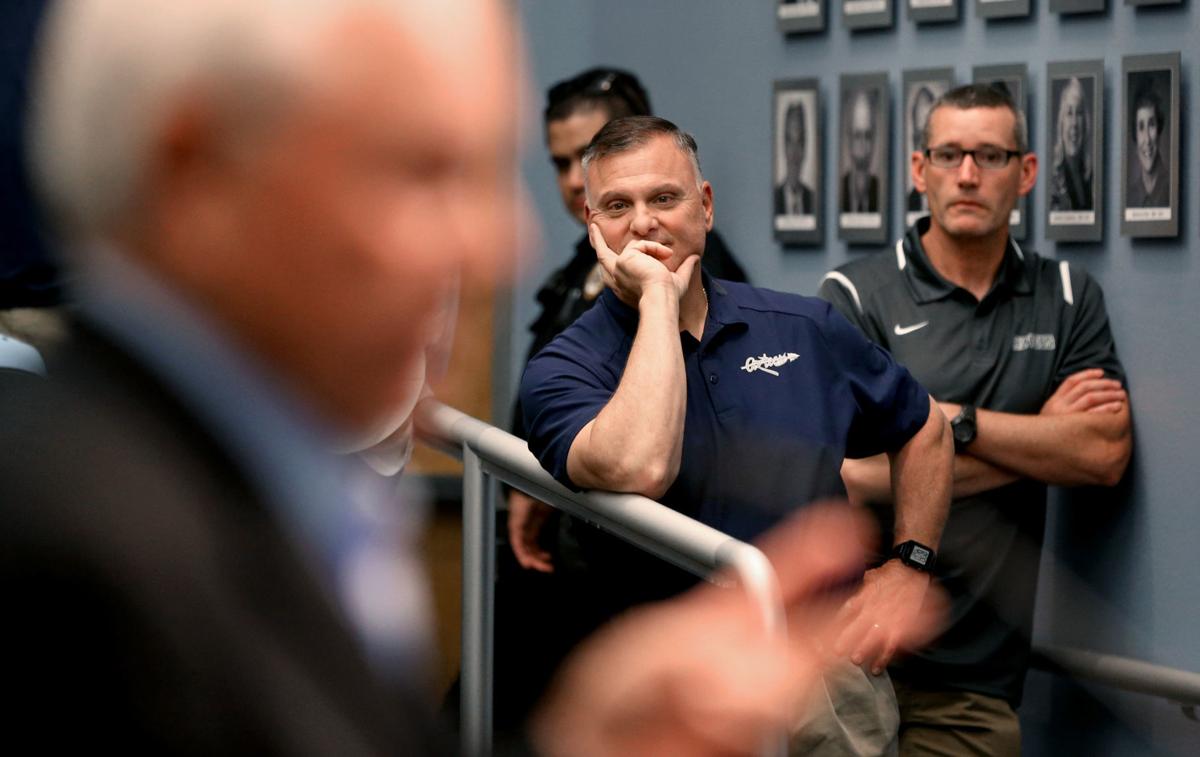 Pima College football coach Jim Monaco, center, says the school shouldn’t get rid of other sports just to save his. “We’ve all been put in a terrible situation,” he said. 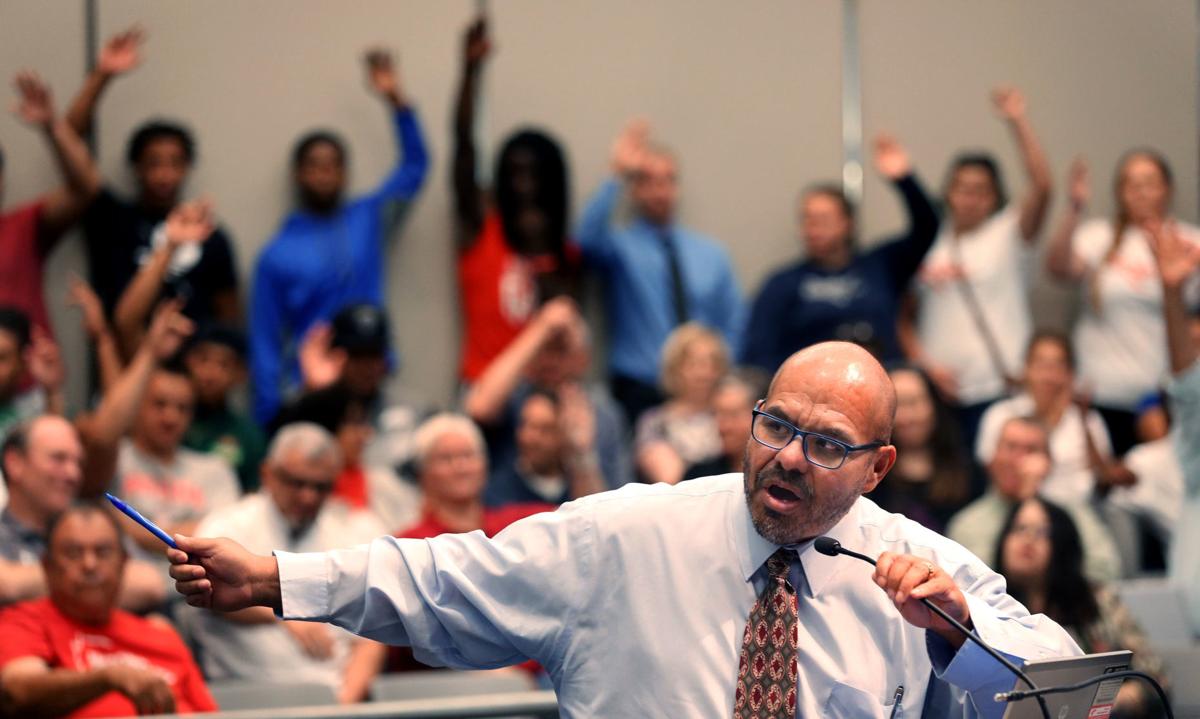 Richard Hernandez calls for a show of hands supporting the Pima athletics programs during a meeting Wednesday.

The operating budget of the Pima College football program is about $500,000 a year. Some years it’ll hit $600,000, or maybe a bit more, especially if there is a three-day trip to Snow College in Ephraim, Utah, or if it’s time to buy new helmets, or if the rent goes up for use of Kino Stadium.

It is by far the most expensive of PCC’s 16 sports but in the context of college football, it is a bargain.

Consider this: USC receivers coach Keary Colbert was on PCC’s campus Wednesday to evaluate and recruit some of coach Jim Monaco’s Aztecs.

An assistant coach at a school like USC is often paid close to $500,000 a year. Sometimes it’s double that. A year ago, the Oregon Ducks signed Aztecs defensive back Haki Woods, who will play for UO defensive coordinator Jim Leavitt, who is paid — no joke — $1.15 million per year.

Doesn’t this all seem a bit out of whack? Big time coaches making big-time money are coming to Pima College to recruit those from a school struggling to buy a new pair of shoulder pads.

Monaco is the only full-time employee on the Pima football coaching staff. He makes about $55,000 a year. It’s not like anyone’s spending to excess here.

Or so it seemed.

On Wednesday night at PCC’s district office, the dialogue wasn’t about hot recruits or big salaries. It was about eliminating Pima’s football program all together.

The good that comes from Pima’s $500,000-a-year football program is undeniable. Former Sahuaro High standout Derik Hall, who initially began his career at NAU, is now a self-described “second-chance” Aztec.

“I got in some trouble, made some bad choices,” he told the Lambert and the board of directors. “Pima has helped to change me. I’ve become a new man, I’ve gotten past a period of depression. I’m not the only one who has turned his life around by playing football at Pima.”

Former Arizona All-Pac-10 lineman Glenn Parker, a 12-year NFL player, spoke passionately of his junior college football experience in Huntington Beach, California, and how it changed and shaped his life.

I was an underage kid working as a bouncer at a bar, which isn’t the way to go through life,” he told the board. “But I was saved by junior-college football. I met my wife on a recruiting trip to Arizona. I have four wonderful children because of that junior-college experience. These coaches at Pima give kids a chance. Fat kids, skinny kids, dorky kids. It’s such a good place to come together.

“It’s not the cost of having a junior college football team that matters, it’s the cost of not having one.”

This debate began recently when decision-makers of four Phoenix-area schools who play opposite Pima in the Western States Football League — Glendale College, Mesa College, Scottsdale College and Phoenix College — announced their withdrawal from the WSFL beginning in 2019.

Overnight, that put the four remaining WSFL schools in jeopardy. Who will Pima, Eastern Arizona, Western Arizona and Snow College play? There are no other JC football programs in Arizona, none in Nevada, and only one in New Mexico and one in Colorado.

Suddenly, there was an easy out — geography — an avenue for Pima College’s financially-challenged administration to chop $500,000 off the yearly budget.

Board member Luis Gonzales said “we don’t need to do anything now. We have enough money in the budget to make it work. Just leave it alone.”

Board member Sylvia M. Lee hedged. “There are going to be cuts,” she said. “Football can be saved but possibly at the demise of other sports. I don’t want football to go; I really believe in what it can do for people of color in our community. But we must run a college the way it needs to be run.”

Ultimately, Lambert, with input from athletic director Edgar Soto, and his assistant, Jerry Stitt, will examine the numbers and make a decision. There is no rush. The 2018 season will go on as scheduled.

“We don’t want people to panic,” said Soto. “The chancellor will make a comprehensive study of the athletic department. We won’t be making a decision until June.”

Of the 530 schools in the NJCAA, only 65 field football teams. Whether that number drops to 64 will be determined soon. Dick Tomey, who coached at Arizona from 1987-2000, said he hopes the PCC chancellor can look beyond the bottom line.

“I understand the questions are — money, health and what the Pima football program does for the community,” Tomey said. “Football gives you all kinds of demographics and diversity.

“That is what football is. The Phoenix schools have chosen not to play football. This is a chance for Tucson to take a different route, a role of leadership.”

The 100 or so people crowded into Pima College’s district office applauded Tomey’s words. He put it in the most simple terms: Will PCC choose dollars or sense?

Stanford’s David Shaw is among those who oppose the change, which will award a touchback on any kickoff fair-caught inside the 25-yard line.

The veteran Southern Arizona coach led the Aztecs to last week's NJCAA Division II national championship game. He then hopped in his car, bound for another Final Four.

Banner-UMC nurse shocked the sports world with her showing in a rainswept race Monday.

Greg Hansen: Tucson High sprinter has potential to be fastest in city history

Neysia Howard won three state titles last week, and could get even better when she heads to the University of Arizona.

Pima College football program's future could be decided this week

Pima chancellor Lee Lambert will make decision on program's future — and that of the other teams — on Thursday morning.

Pima College football coach Jim Monaco, center, says the school shouldn’t get rid of other sports just to save his. “We’ve all been put in a terrible situation,” he said.

Richard Hernandez calls for a show of hands supporting the Pima athletics programs during a meeting Wednesday.