Greg Hansen: Running legend Bernard Lagat wants to stay with Wildcats after impressive first year on staff
Share this
1 of 2 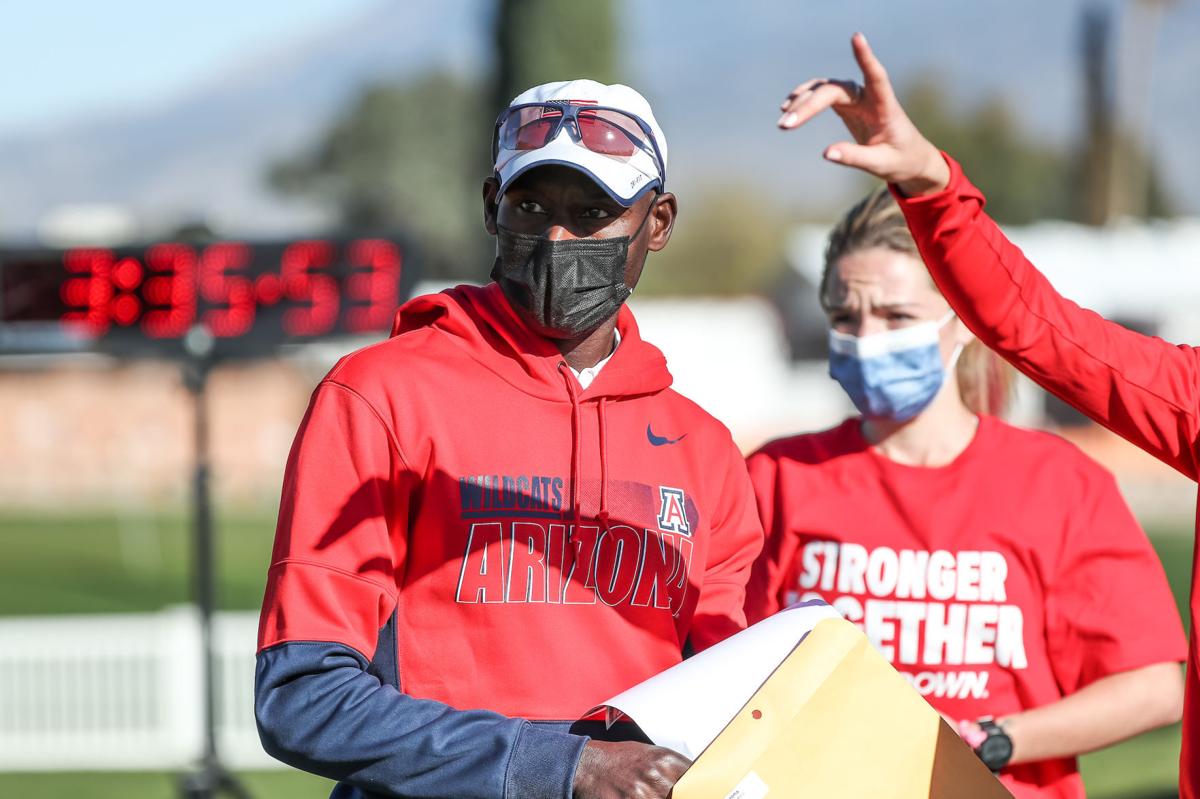 Bernard Lagat said he would like to stay on as the Wildcats’ cross country coach. 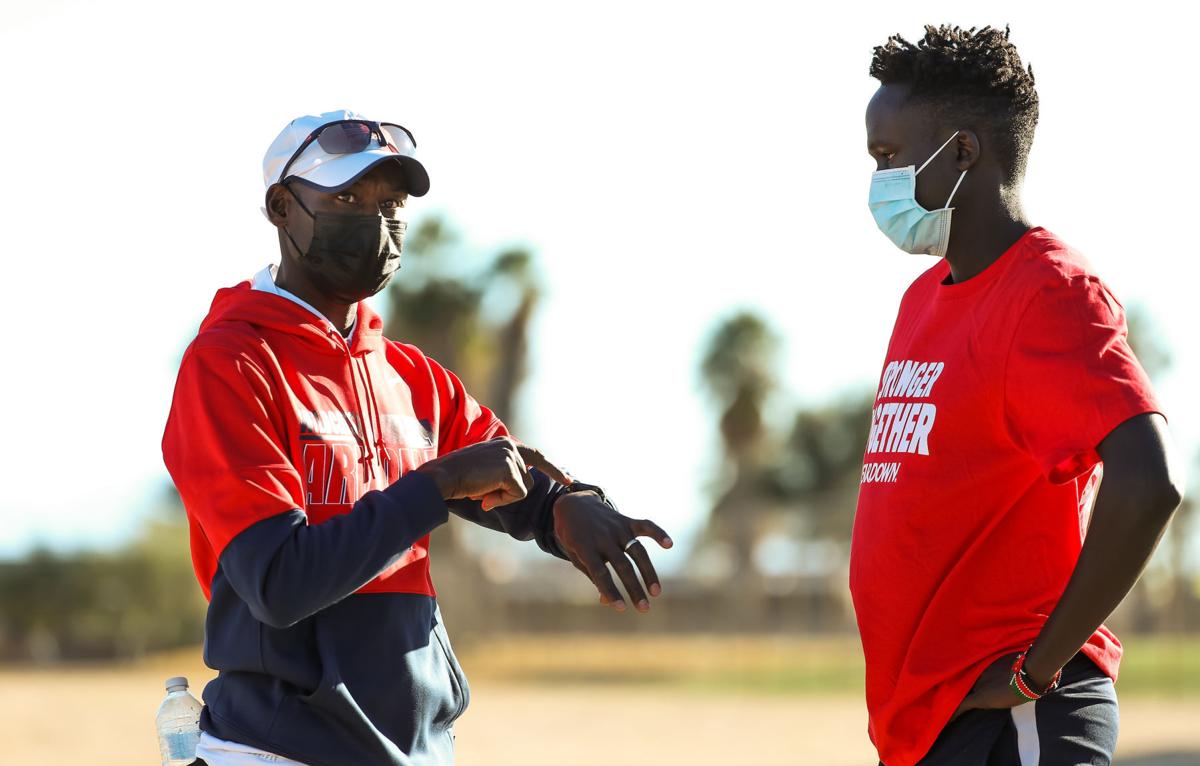 Bernard Lagat, left, will coach the Wildcats cross country team and continue as an assistant for the track and field program.

Bernard Lagat had been called a lot of different things: Olympian. All-American. World champion. At Washington State, his alma mater, he is simply “Lagat,” which translates to legend in any language.

A few weeks ago, Lagat was called something totally unfamiliar: Coach.

“I feel like I’m still an athlete, so when someone would say ‘Hey, Coach,’ I sometimes wouldn’t respond,” Lagat says with a laugh. “But then it was, ‘Oh, wait, that’s me.’”

Lots of prominent Tucson athletes have become coaches: Terry Francona, Adia Barnes, Steve Kerr, Stacey Iveson. But few broke into the coaching business like Lagat, the 46-year-old five-time Olympian who moved to Tucson 19 years ago and soon won the 1,500-meters silver medal at the 2004 Athens Olympics.

A few days before Thanksgiving, Lagat was named the interim cross country coach at Arizona, replacing his coach of 25 years, James Li, who chose to retire; Li recently moved to Shanghai, where he now coaches elite distance runners.

Until that day, Lagat’s only coaching was that of his son, Miika, a freshman at Rincon/University High School, and a few of Miika’s friends interested in running. But Miika has since become an emerging tennis prospect and Lagat’s coaching days appeared to be over.

Arizona’s young cross country teams had the season pushed back to February and four of six meets canceled. The school’s leading distance runner, Carlos Villarreal, chose not to return for his final year of eligibility while training for the Mexican Olympic Trials.

“It was very difficult having Dr. Li move on,” says UA head track and field coach Fred Harvey. “However, there was never a question in my mind that Bernard was what these young people needed. It is so amazing watching him work with them.”

The timing couldn’t have been better. For the first time since his Olympic debut in 2000, Lagat is not absorbed by trying to qualify for the Summer Games. He doesn’t view his quick introduction to coaching as anything related to his title of interim coach.

Asked if he would like to be hired as Arizona’s full-time cross country coach, Lagat didn’t hesitate.

“I would, I’d like this to be long term,” he says. “Funny, if you had told me about this even a year ago — if you asked if I could see myself coaching — I’d be like, ‘Ah, no.’ But that has changed 100%. I would love to continue. The job grows on you. I want to see my relationships with the athletes grow.”

Lagat will coach the Wildcats in next week’s NCAA cross country finals, and stay with the men’s and women’s distance runners through May’s Pac-12 championships and June’s NCAA finals. And although two elite meets have already been canceled — the Mt. SAC relays and the Stanford Invitational — Lagat’s duty is just getting started.

Can you imagine his impact as a recruiter? Try to picture a five-star 1,500-meter runner getting a phone call from Lagat, asking about interest in Arizona.

His foot would be in the recruit’s door before the conversation ended.

Lagat isn’t just one of the world’s most well-known runners, he’s a positive and engaging personality whose ego doesn’t come first. He fully understood he would be coaching young and undermanned UA cross country teams but didn’t let it deter him.

“This was such an overwhelming situation for our student-athletes,” says Harvey. “I’ve had the opportunity to work with and know Olympians, but they never had to deal with what these young people have dealt with. It’s a wonderful story.”

At this time last year, Lagat was a serious contender at the U.S. Olympic Marathon Trials in Atlanta. He and longtime training partner Abdi Abdiraham, a four-time Olympian from Tucson High and the UA, hoped to get two of the three spots available in the Tokyo Olympics. Abdirahman finished third, but Lagat was 18th.

It effectively meant that Lagat’s bid for a record sixth Olympic berth would not be realized. And although he continues to actively train for world-class marathons and half-marathons, he understood that at age 46, he would not be able to make the USA Olympic team at 10,000 meters, one of six American records he has held.

“I want to be realistic,” he says. “If I run the 10K, I would need to run 20 seconds faster than my personal best to qualify. Part of me says, ‘You’re a fighter; you’ve done it before.’ But it’s time to understand my best work is in the books.”

His best work as a coach is yet to be determined.

Why have the Ducks won nine NCAA Tournament games in a period Arizona has won just two? There’s got to be more to it than the NCAA/FBI investigation that has rattled the reputation of UA basketball.

Greg Hansen: Wildcats' self-sanctioning puts them in small club: the 'out crowd'

Over the last 60 years, only four schools now in the Pac-12 have been banned from postseason basketball participation. Arizona is No. 5.

Since taking charge in 1965, the Conquistadores have turned Tucson into a major player in pro golf.

With four weeks left in the spring season, Arizona's coach is quick to point out that the Wildcats have improved substantially since the beginning of the season.

'Cooped up' Cats fans return for first time in a year, relish chance to cheer on team at Hi Corbett

The boys were back after a weekend in Texas. And for the first time in 366 days, so were Wildcats fans.

Mariah Lopez shuts down No. 16 FSU in Wildcats' road win

UA tops Seminoles 1-0 to improve to 14-2. The teams finish their three-game series Saturday in Tallahassee.

Caballeros will host Gilbert on Wednesday with a berth in the state championship on the line.

The Star columnist checks in on Arizona's lack of relevancy the last three seasons under Sean Miller and recent comments from UA president Robert C. Robbins.

Bernard Lagat said he would like to stay on as the Wildcats’ cross country coach.

Bernard Lagat, left, will coach the Wildcats cross country team and continue as an assistant for the track and field program.