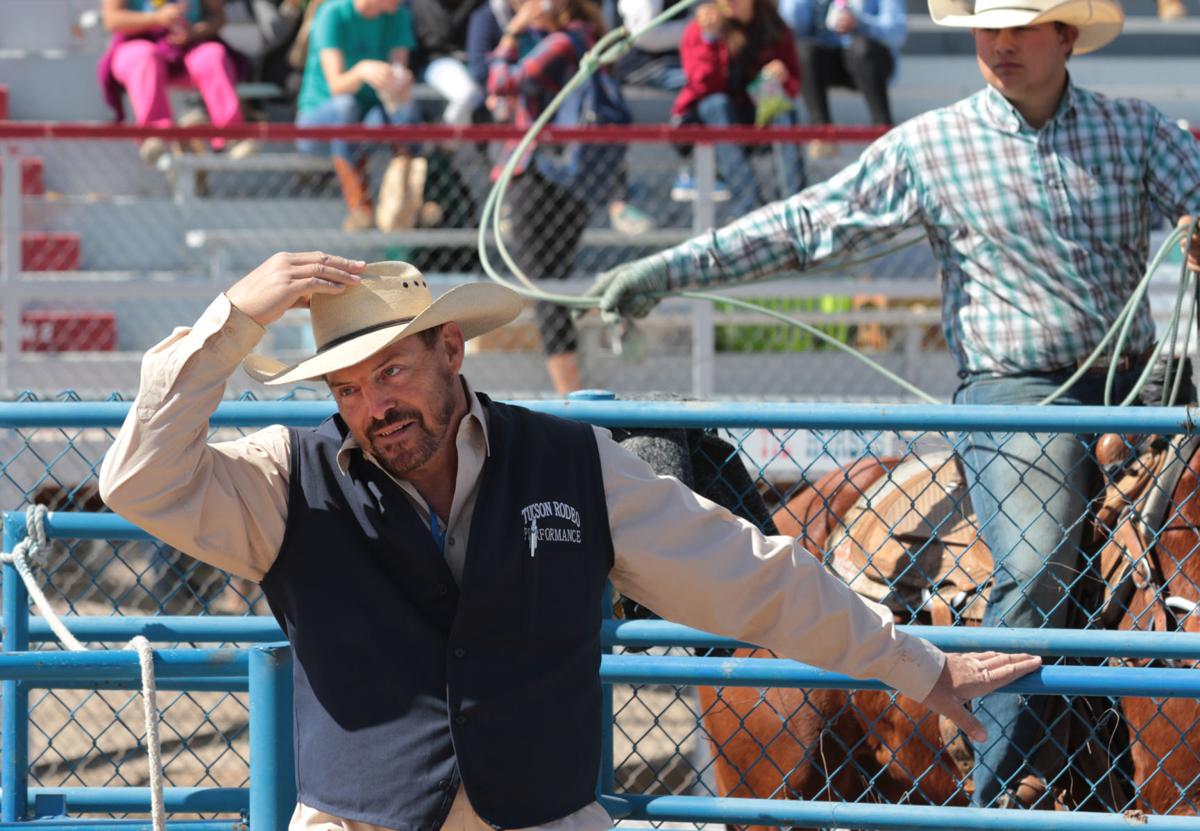 Sam Merriman grew up in Tucson and played football for the University of Idaho, where he set a record for tackles, and the Seattle Seahawks. 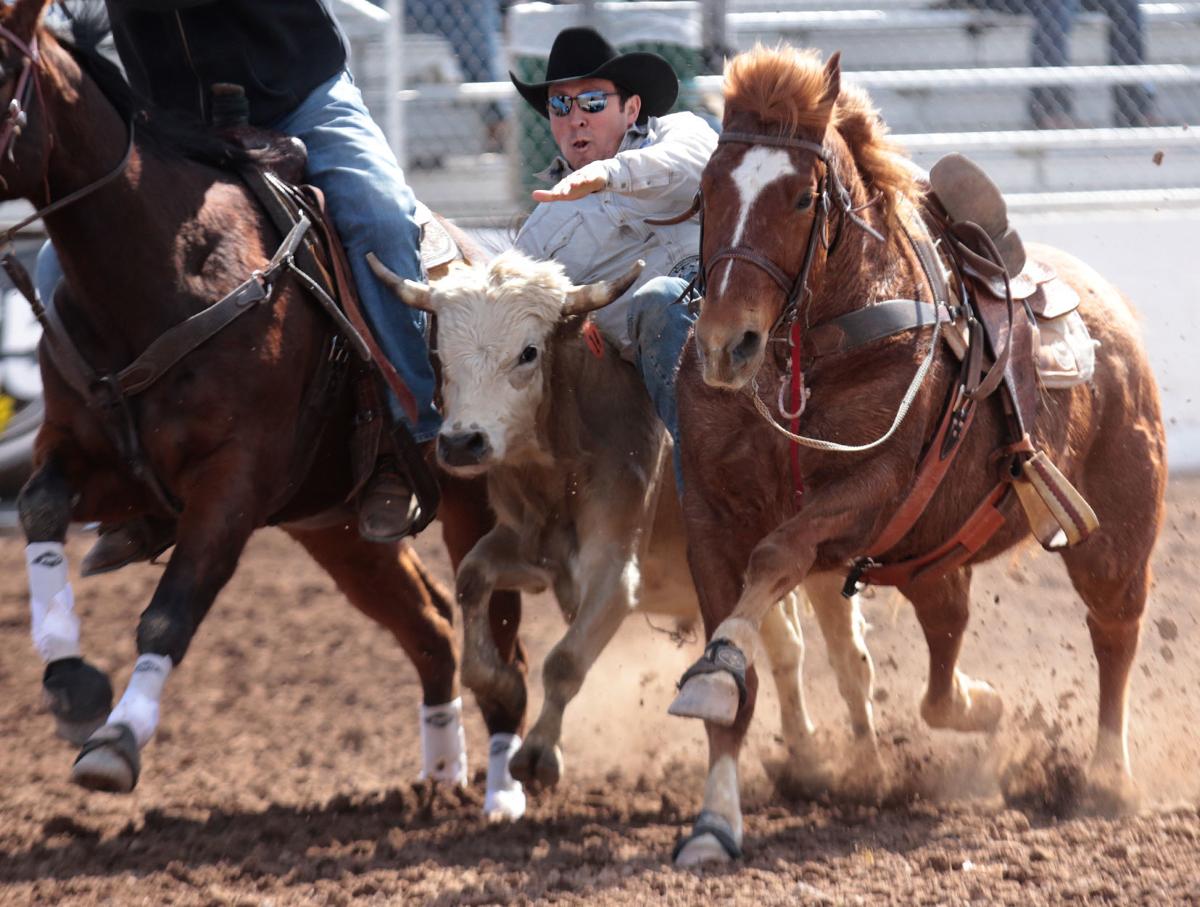 Riley Duvall slides onto a steer during rodeo slack time Monday at the Tucson Rodeo. He took it down in 6.4 seconds. 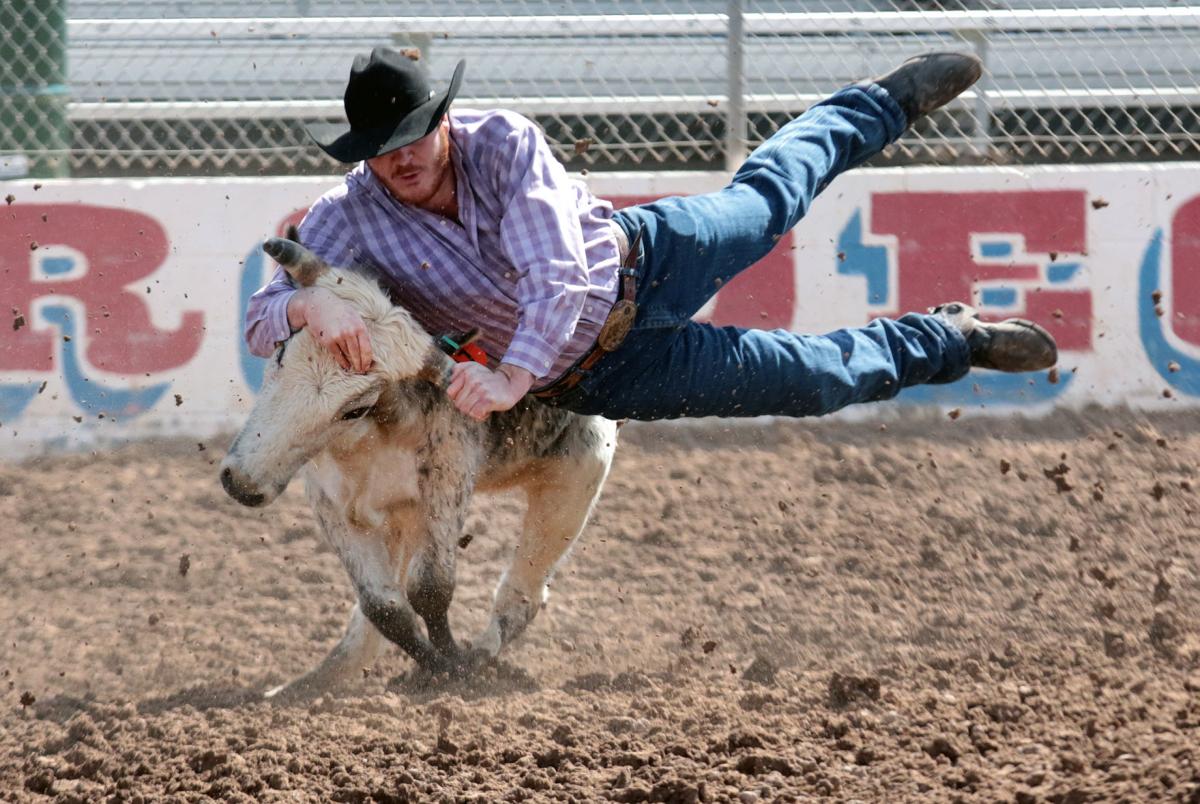 None of the 100 or so calf-ropers and steer-wrestlers who lined up in their “Montana Silversmith” vests and “Bar None Country Store” boots knew that the man who directed their horses to the starter’s box won the 1972 “Hoof and Horns” 4-H competition at the Pima County Fairgrounds.

None suspected that Sam Merriman was the 1975 champion of the “Saddle and Spur” breakaway roping competition, or a 1978 winner of the Southern Arizona Future Farmers of America competition.

But Merriman gets your attention, even if you don’t know that he spent five years as one of the most productive special teams players in NFL history.

He is 6-feet-3 inches tall and, even now, 35 years after he played in the AFC Championship game against Jim Plunkett and the Oakland Raiders, Merriman has a commanding presence as he directs calf-ropers and steer-wrestlers in heavy traffic at the Tucson Rodeo Grounds.

“It was probably inevitable that I came back to this, back to the rodeo,” Merriman said Monday during slack competition at La Fiesta de los Vaqueros. “This is how I grew up. This has been in my blood forever.”

Instead of wearing Seahawks jersey No. 51, Merriman wears a Tucson Rodeo Performance vest, part of a small army of committee members and associate committee members who have made La Fiesta de los Vaqueros, at 93, Tucson’s most historic sporting event.

Over those 93 years, the most transcendent rodeo cowboys ever — Casey Tibbs, Jim Shoulders, Ty Murray — have walked on the turf Merriman walked Monday.

Few have a better story.

Merriman is from the generation of cowboys who made being a cowboy cool. Future Farmers of America? It rocks. The 4-H competition at the county fair? Bring it.

“Some nights my sister and I would stay out till 10:30, roping, and ride back home in the Rillito wash in the dark,” he remembers. “We were always on our horses.”

But when one of Tucson’s top junior cowboys grew from 110 pounds to 190 while at Amphitheater High School, he became much more than a cowboy. He became one of the most accomplished football players in Tucson history. He was an integral part of coach Vern Friedli’s only state championship team, 1979. After that came one of the most difficult decisions of Merriman’s life.

“My parents told me it would be my decision,” he said. “Well, we ended up selling our horses and I went off to play college football.”

A month ago, Merriman was told he had been voted into the University of Idaho Sports Hall of Fame, and it almost seems overdue. He set the school record with 519 tackles from 1980-82, was drafted by the Seattle Seahawks, whereupon he set the franchise record for special teams tackles.

Retiring at 27 with his health intact, Merriman got on with a busy life in Seattle. He raised a family, worked in commercial real estate, coached high school football for 22 years, built and sold a health-care equipment company, and five years ago decided to return to his hometown.

He bought two horses and went back to the rodeo.

At 56, he’s not able to crack the PRCA circuit, or even the regional Turquoise Circuit, but there are ways to stay competitive.

Arizona’s prevalent, all-comers Jackpot rodeos demand an entry fee of anywhere from $30 to $1,000, and they’re as close as Picacho and as far away as Wickenburg.

“I’m a die-hard so I do Jackpot ropin,’” he said. “Arizona’s a great place in the winter for these Jackpot rodeos that seem to be everywhere. I was pretty decent as a kid, so it’s still doable even though it was 30 years since I was last in competition. I’ve been ropin’ with some guys who are close to 80. There’s a wealth of knowledge that these men can share, and I’ve been able to learn from them and get better.”

Gary Williams, the group’s accomplished general manager, knows a natural when he sees one, and he saw one in Merriman.

“His leadership is especially noticeable in the bull riding segment,” Williams said. “He brought his football and coaching skills to help make the operation the best it’s ever been.”

On Monday morning, Merriman worked with about 15 other men in a holding area for dozens of calves separated from the calf ropers by a blue gate. The rangy former NFL linebacker stood out, looking like John Wayne in the middle of a cattle drive.

At one point, the wind blew Merriman’s cowboy hat into the chute with 10 or 20 rompin’ calves.

He opened the gate, moved through the calves and retrieved his hat before it was stomped and turned to dirt.

It was no more difficult than covering a kickoff against the Dallas Cowboys.

The 2018 La Fiesta de los Vaqueros Tucson Rodeo Parade, the nation's longest non-motorized parade, and a fixture in Tucson every February since 1925.

As of Tuesday afternoon, 19 of the city's 30 firefighters have submitted their resignations ahead of a March 1 deadline.

Senior could break record this week if UA wins twice on Oregon trip.

Arizona basketball: On Dusan Ristic's wins, team meetings and that nightmare in Eugene

Sean Miller said Oregon's 3-point shooting in a 27-point win over UA last season was "like a video game."

'Give him the ball and let him play': UA commit Brandon Williams healthy and thriving

Injury cost scoring point guard most of his junior season.

Rodeo competition kicked off Saturday with a muddy, but competitive, showcase.

Three decades' worth of competition hasn't soured longtime contributor's passion for the sport, the animals - and Tucson.

Tom Elliott will be doing what he loves most in today’s Tucson Rodeo Parade: waving.

Aldebaran is “only” 67 light years away.

Lots of comedy and a bit of drama on Tucson stages this week:

Tucson weather: Below normal temperatures continue through the weekend

Passing storm systems will bring chances of rain to the region.

Dog went missing following a Saturday rollover crash on westbound I-10 near Willcox.

Greg Hansen: Beavers long ago fell from Pac-12 perch; is Arizona next?

Uncertainty clouds Arizona's future as the Wildcats head to Oregon for the Beavers and Ducks.

Sam Merriman grew up in Tucson and played football for the University of Idaho, where he set a record for tackles, and the Seattle Seahawks.

Riley Duvall slides onto a steer during rodeo slack time Monday at the Tucson Rodeo. He took it down in 6.4 seconds.