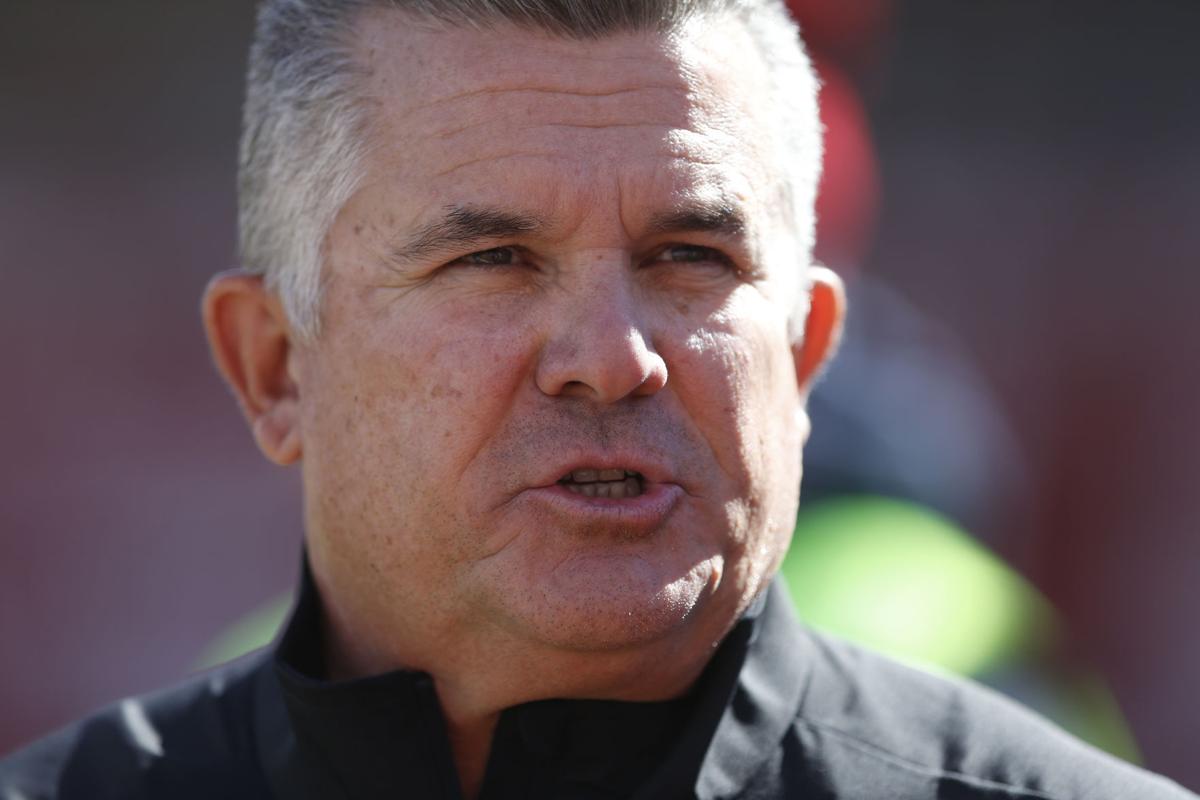 Arizona State coach Todd Graham might be the Pac-12 Coach of the Year if he beats Arizona this weekend. 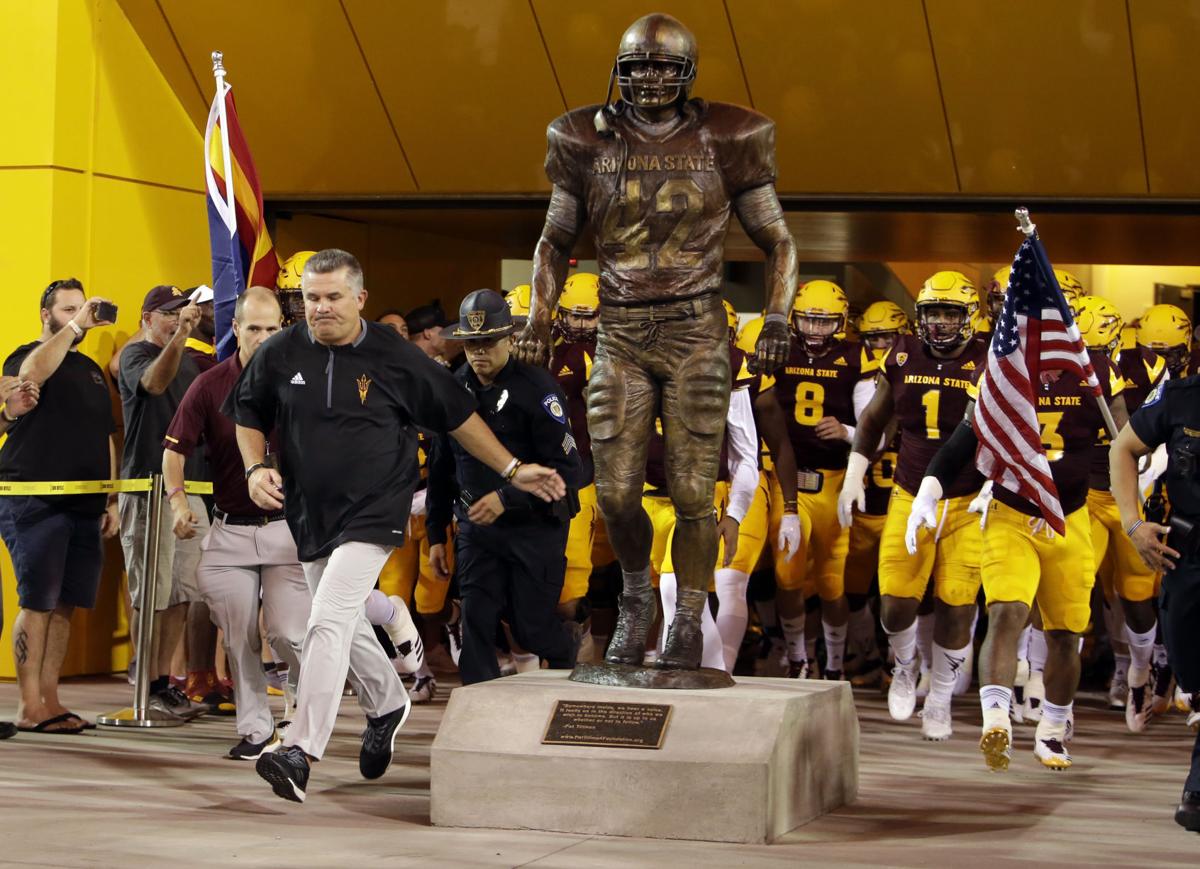 Todd Graham has a 59.2 winning percentage at Arizona State, better than any of his predecessors dating to 1987 — all of whom were fired.

It’s not the long hours, it’s not worrying that your opponent is stealing your signals and your recruits, and it’s not that TV cameras catch you using language that’d make your mom cry.

It’s that you’re as dispensable as the returning champion on “Jeopardy!”

If Todd Graham coaches Arizona State to a Territorial Cup victory over Arizona on Saturday, he’s apt to be selected the Pac-12 Coach of the Year, or no worse than runner-up. But if he loses, he’ll probably be fired.

Can one game mean that much?

Graham’s ASU winning percentage, 59.2, is greater than any of his predecessors dating to 1987 — all of whom were fired. Sun Devils fans, and the administration, may have determined Graham is no Frank Kush, an irascible old-school coach who became the school’s most legendary sports figure.

Kush owned Arizona, beating the Wildcats 13 times in 14 years in one period. His bristly behavior played to cheers.

In 2006, a day after he beat Arizona for the fourth time in five years, ASU coach Dirk Koetter was fired. He had gone 40-34 in six seasons.

“When you meet the new coach,” Koetter said, “make sure you don’t say, ‘you just have to beat the UA to make everybody happy.’”

Firing a college football coach has no boundaries.

Could Todd Graham be No. 13? Over the last 50 years, only five Territorial Cup coaches — Smith, John Cooper, Jim Young, Darrell Mudra and Darryl Rogers — left on their terms.

Mudra resigned at Arizona in 1968 because the school wouldn’t give him a multiyear contract.

Cooper went to Ohio State, Smith to USC, Young to Purdue and Rogers to the NFL.

In 1991, ASU fired Larry Marmie after beating Arizona 37-14, ending nine excruciating years in which the Sun Devils had not defeated Arizona.

“There needs to be a place in college football for a man of the character and fiber of Larry,” said ASU athletic director Charles Harris. “But that place isn’t at ASU. I believe we are the kind of program that ought to finish in the top third of the Pac-12 regularly.”

Over the next quarter-century, ASU fired three coaches. Graham would make it 4 for 4. As for the Sun Devils finishing in the “top third regularly,” they won the league once, 1996, won the division once, 2013, and have gone 112-107 in conference games.

ASU fired Erickson a day after he lost the 2011 Territorial Cup in Tempe to an Arizona team that had fired Mike Stoops six weeks earlier.

“There is a lot to look forward to at Arizona State,” said athletic director Lisa Love. “We are in a powerful position, with great players returning.”

It sounded the same way when Erickson’s predecessor, Koetter, was fired.

Looking for a higher platform? The Sun Devils have since spent about $300 million on new football facilities yet produced a 30-23 Pac-12 record.

If ASU fires Graham it will largely be for his lack of connectivity in Phoenix. He’s not a charmer but rather a loud, isolated, acquired taste. But what does that matter? The same can be said for Arizona’s Rich Rodriguez, who was on the Road to Dismissal before discovering Khalil Tate on his bench.

When the Sun Devils fired the brusque Koetter 11 years ago, Love, the AD, was asked if Koetter’s annoying demeanor triggered the decision.

“How charming was Frank Kush?” she asked.

Arizona will face SMU on Thursday at 7:30 p.m. in the second Battle 4 Atlantis game.

UA coach Rich Rodriguez wants Tate to operate ‘within the framework of the offense,’ allowing big plays to develop organically.

The 53-year-old is in his first year on Rich Rodriguez's staff following 21 seasons as a player and coach in the NFL.

Arizona Wildcats coach Rich Rodriguez on the Territorial Cup: 'This one is different'

After a stunning defeat for the No. 2 team in the country at the hands of NC State, Arizona will look to bounce back against a 4-1 Southern Me…

Greg Hansen and Star sports editor Ryan Finley get a little nostalgic and relive some of the top moments in Territorial Cup history, including…

National perception of the Pac-12 is down, and perhaps rightfully so since the conference hasn’t had a true College Football Playoff contender…

Two bees' nests were each several feet high at the house.

Improvements to restoration plan may help lure rare sparrows back.

Option attack makes Lions one of the state's most effective offenses, at any level.

Tucson's high temperature Saturday broke a record that was set in 1894, according to the National Weather Service.

Nahe Sulunga is a onetime Colorado State commit who was also being courted by Utah, Oregon State and others.

Arizona State coach Todd Graham might be the Pac-12 Coach of the Year if he beats Arizona this weekend.

Todd Graham has a 59.2 winning percentage at Arizona State, better than any of his predecessors dating to 1987 — all of whom were fired.