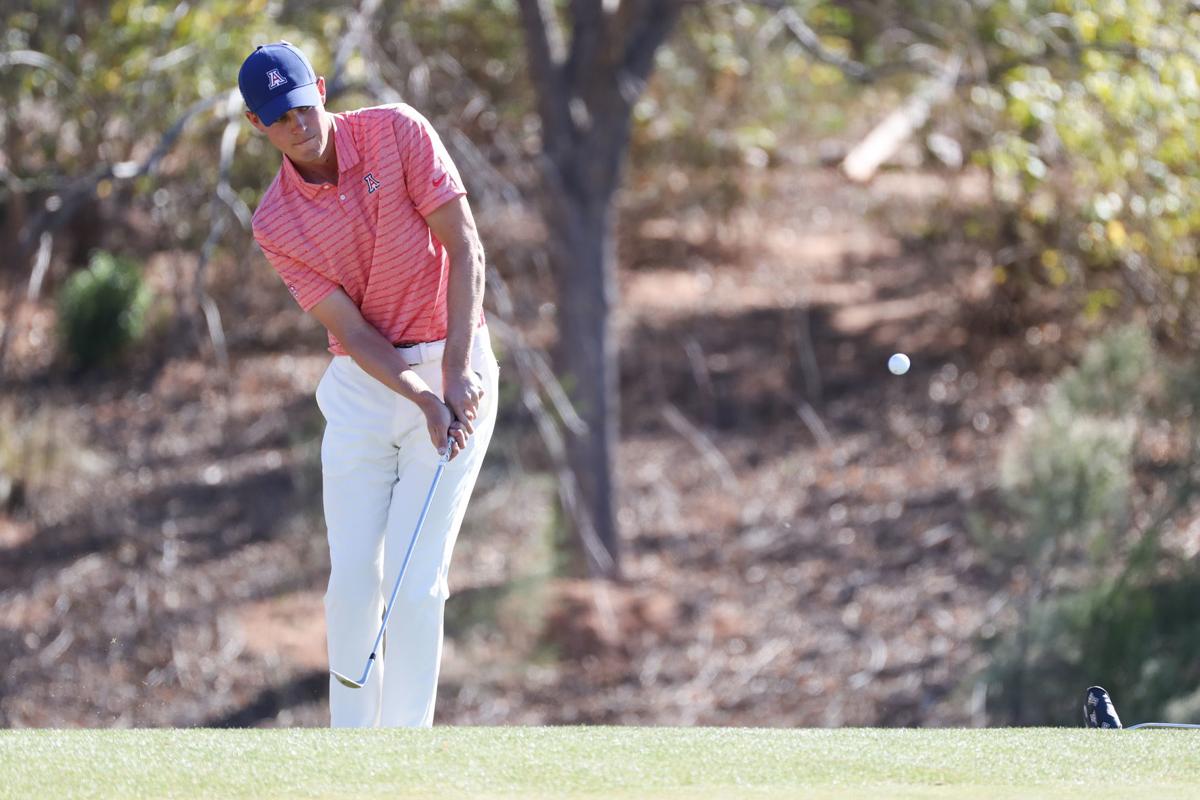 Trevor Werbylo shot rounds of 65, 71 and 67 to finish tied for the lead at the Arizona Intercollegiate at Sewailo Golf Club. On Tuesday, Werbylo was defeated by Washington’s Henry Lee in a sudden-death playoff. The Wildcats won the team title for the third straight year. 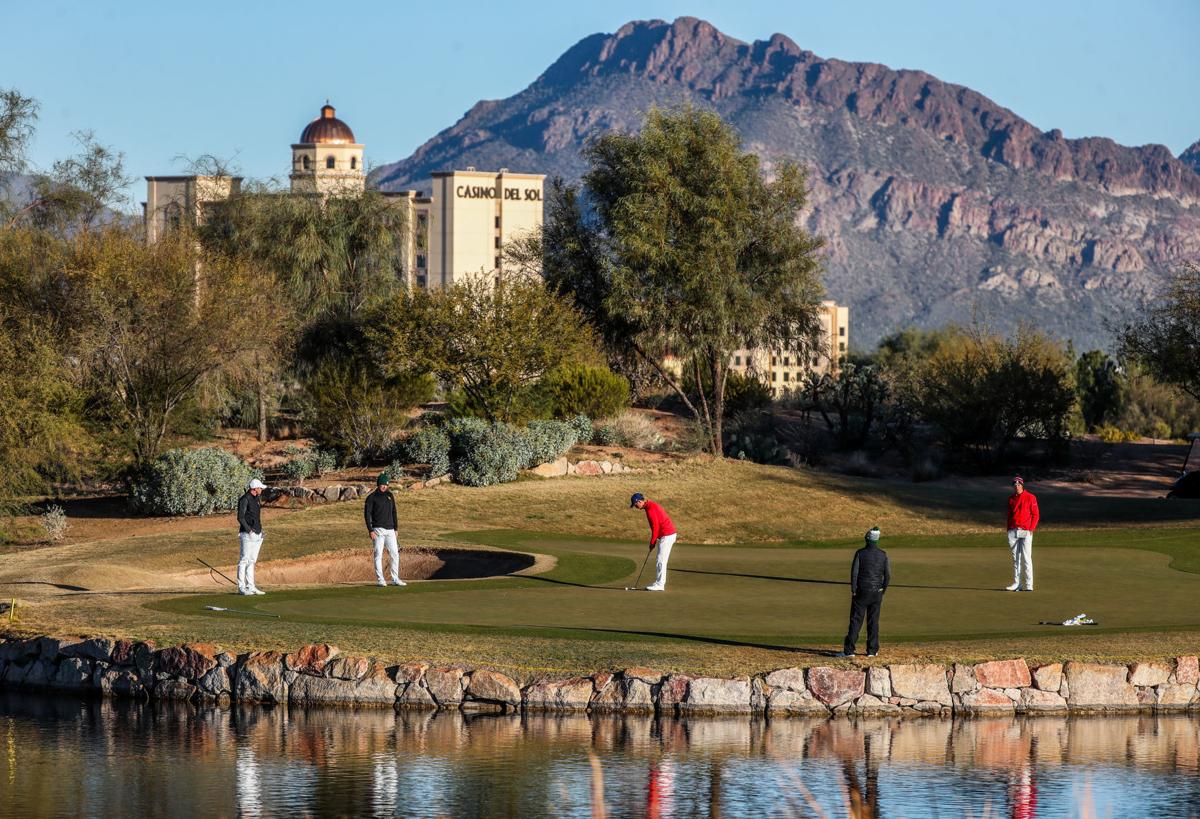 Arizona had four of its five starters place in the top 11 in the Arizona Intercollegiate at Sewailo Golf Club.

Jim Anderson grabbed a microphone Tuesday afternoon and began to introduce the champions of the 40th Arizona Intercollegiate golf tournament. The microphone cut out. All you could hear was:

Over two days at the Sewailo Golf Club, a faulty microphone was about the only thing that went wrong for Anderson’s UA men’s golf team.

The Wildcats shot a cumulative 21 under par to beat No. 12 Baylor by nine strokes. It seemed like the good old days for Arizona’s men’s golf program, which produced an impressive procession of future pros from 1980 to 2010, winning 61 tournaments, including the NCAA championship.

And then it all went poof.

After Arizona hired Anderson away from the Texas A&M golf program in 2012, the Wildcats went on an 0-for-65 tournament streak.

As recently as 2016, they finished 12th in their own event, the Arizona Intercollegiate, shooting 51 over par.

So you might imagine the joy that was etched on Anderson’s face Tuesday when his team won its third straight Arizona Intercollegiate, something that no other UA team could do, not even the teams of Robert Gamez or Jim Furyk or Ricky Barnes.

Arizona has climbed to No. 11 in the national polls and the expectations have done a 180.

“We probably didn’t play great golf (Monday), but we rose above it,” Anderson said. “Now we’ve got experience in the lineup, three seniors and Trevor Werbylo, who plays like a senior. Being the first Arizona team to ever win this championship three years in a row is pretty special.”

About the only thing that could’ve made 15 hours of golf at the Casino del Sol facility any better would’ve been for Werbylo to win his first college championship.

The junior from Salpointe Catholic High School opened with a 65 Monday morning, survived a freakish triple-bogey in the afternoon round, and on Tuesday went head-to-head against 17th-ranked Washington’s rising star, Henry Lee.

Werbylo and Lee tied for the lead at 10-under. Lee won the sudden-death playoff, a deserving champion who shot rounds of 69, 68, 66.

If it affected Werbylo you’d never know it. In the playoff, he didn’t change expressions after his approach shot hit the back collar of the green and took an unlucky bounce into the water.

“Trevor’s going to win multiple times,” said Anderson. “He’s got such a big appetite, one that goes beyond college golf.”

Werbylo, who led Salpointe Catholic to back-to-back No. 2 finishes in the state tournament in 2015 and 2016, has become the face of UA men’s golf. He reached the match-play portion of the U.S. Amateur Championships last August and has been knocking on the door, improving year to year the way UA predecessors like Chris Nallen, Ted Purdy and Rory Sabbatini did a generation earlier.

Werbylo also finished second in the Arizona Intercollegiate last year, but that’s misleading. A year ago he ran into Texas A&M All-American Chandler Phillips, who shot 21 under par. Nobody else had a chance.

“What’s encouraging to me is that our program has made such steady progress, even before I got here,” said Werbylo. “This year we can compete with anybody, top to bottom. We’ve got a lot of guys who can go out and win a tournament.”

Any time a college team places four of its five starters in the top 11, good things happen.

“We’re trending in the right direction,” said Werbylo. He should know; he’s played in more than 25 NCAA golf events, and while no one — yet — is picking Arizona to win its first Pac-12 championship since 2004, the road ahead has changed from daunting to do-able.

“Our schedule is beefed up this year,” said Anderson. “We’re not looking ahead at anything specifically, but I can tell you this, these guys are hungry.”

When Anderson’s club broke through and won the Arizona Intercollegiate two years ago, Werbylo, a freshman, opened with rounds of 81, 78. He finished 45th overall.

On Tuesday, Werbylo finished 24 shots better. Not only that, the Wildcats were 31 strokes better than they were two years ago.

You don’t need a microphone to deliver that message.

Coach says Max Hazzard's mistakes in the first half led to decision to sit the former UC Irvine standout for the final 20 minutes.

Deandre Ayton scores 31 of the 40 points scored on the night by ex-Cats.

When my family moved to Tucson in 1997, we brought our love for the Lakers to the Sonoran Desert.

The Star previews all of the game day essentials, from projected starting lineups to storylines and series history, ahead of the Arizona Wildcats' road contest against Washington in Seattle.

Lancers hold current edge at top of 4A thanks to tough schedule.

Trevor Werbylo shot rounds of 65, 71 and 67 to finish tied for the lead at the Arizona Intercollegiate at Sewailo Golf Club. On Tuesday, Werbylo was defeated by Washington’s Henry Lee in a sudden-death playoff. The Wildcats won the team title for the third straight year.

Arizona had four of its five starters place in the top 11 in the Arizona Intercollegiate at Sewailo Golf Club.