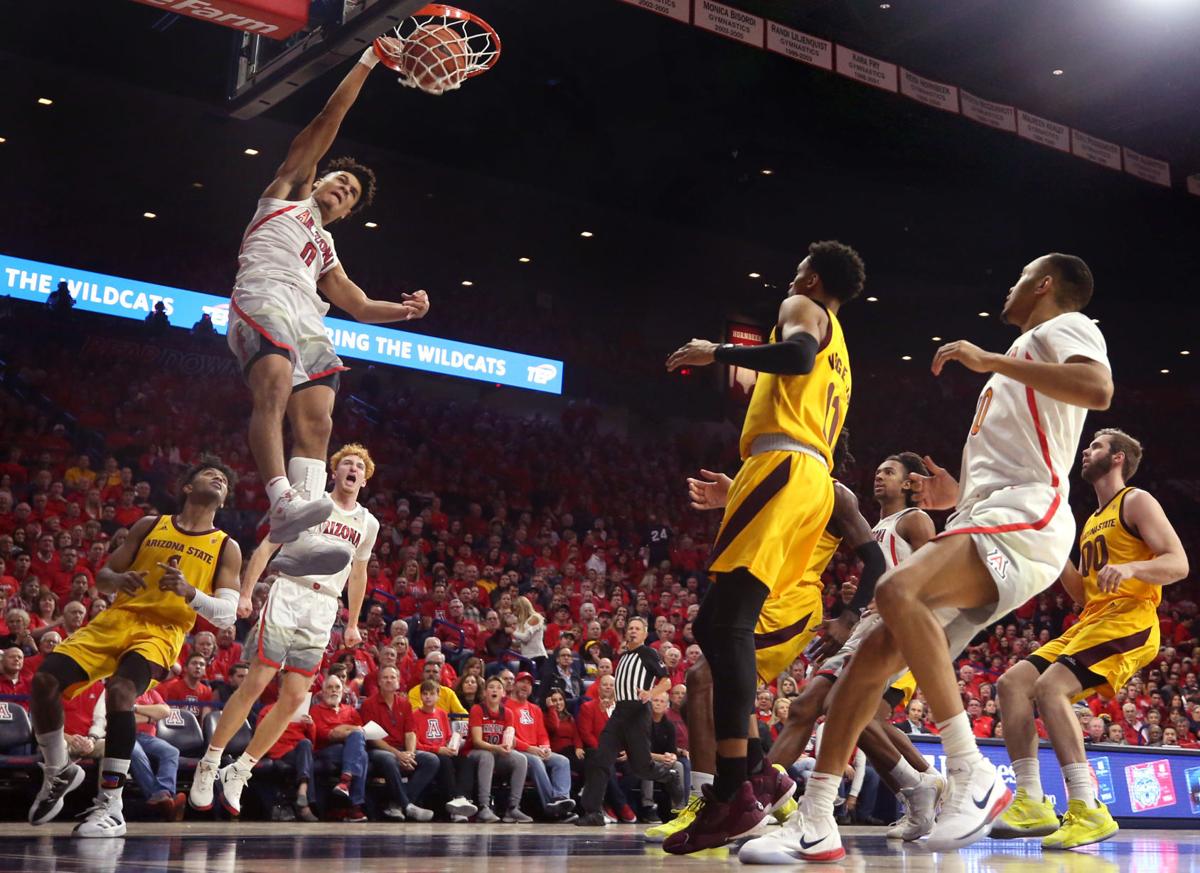 Arizona guard Josh Green (0) has a big dunk to end a Wildcat fast break against Arizona State in their Pac12 opener at McKale Center, January 4, 2020. 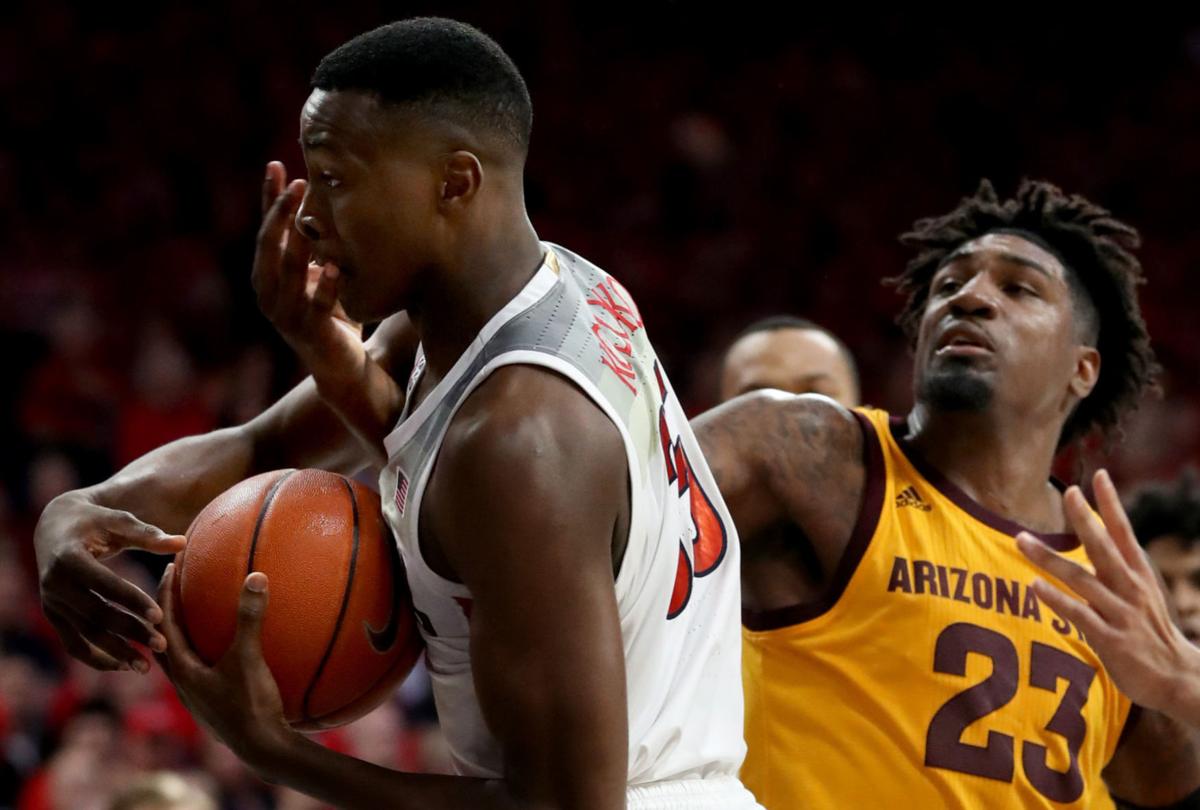 Arizona center Christian Koloko (35) gets a hand in the mouth from Arizona State forward Romello White (23) as he fights his way to the bucket in the second half of their Pac12 opener at McKale Center, January 4, 2020. 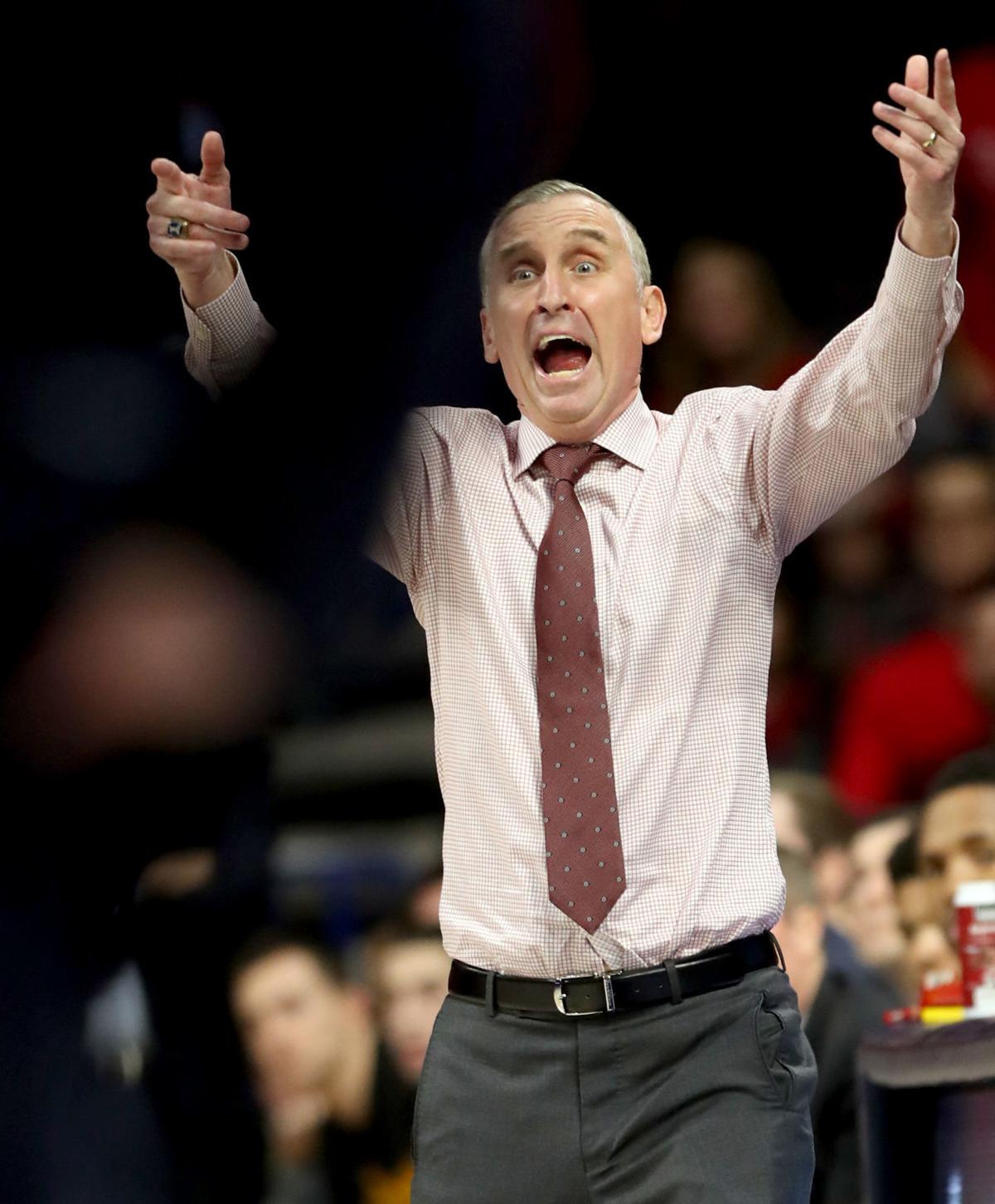 Arizona State head coach Bobby Hurley believes the Wildcats traveled one of their second half scores in their Pac12 opener against Arizona at McKale Center, January 4, 2020.

During its longest in-season break — two weeks — without a basketball game since 1944-45, Arizona stewed, troubled by an unexpected December decline, its only victory in 34 days coming against Nebraska-Omaha.

Even Ben Lindsey’s ill-fated, 4-24 UA team of 1982-83 had a better December, winning three times before losing at home to Illinois Wesleyan and effectively igniting a search that led to Lute Olson.

This time the UA’s December descent didn’t trigger a search as much as it led to a resolve that it had to play better than it did in losses to Baylor, Gonzaga and St. John’s.

It led to a collective commitment: If nothing else it could play harder and smarter — start to finish — than it did in December.

Into this trap walked Arizona State, itself reeling from a 40-point loss to Saint Mary’s, a bit shy on size and worried about its ability to shoot straight; the Sun Devils entered Saturday’s game ranked No. 279 in 3-point shooting and No. 203 in foul shooting.

And just like that the Sun Devils missed their first six foul shots — who ever does that? — went 1 for 10 from 3-point distance and trailed 36-17 at halftime.

So exasperated was ASU coach Bobby Hurley that he snapped his hands together to call a timeout with 51 seconds left in the half. It wasn’t that Arizona played so well, it’s that the UA’s energy and toughness — two elements often missing in December — kicked in.

Arizona won 75-47. The only team in America to have a worse night than ASU were the New England Patriots.

“When we go 3 for 21 from the 3-point line, this is what we’re looking at,” said Hurley, who was impressed by Arizona’s size. “They had an army of big guys coming off the bench. We didn’t really have in inside presence.”

After scoring 58 points against Arizona in a rare two-game sweep last year, Sun Devil guard Remy Martin had just five points when the Wildcats expanded their lead to 30 points on Saturday. Ordinarily, Martin is one of the Pac-12’s leading players, a ball of basketball fire.

But on Saturday all the fire came from Sean Miller’s team. And have you ever seen a more awe-inspiring alley-oop dunk than the one by UA freshman Christian Koloko as Arizona built its lead to 30?

It was that kind of a redemptive night at McKale.

Miller used the unusually long break as a trouble-shooter. He made clear what he expected from each of his seven first-year players — “clarifying roles,” he said — and one of those corrections was getting freshman Zeke Nnaji more involved in the offense.

Even Miller admitted he “probably could’ve done a better job” running more of his club’s offense through Nnaji in the first 13 games, but better late than never, right?

Hurley described Nnaji’s 17-point, 11-rebound night as “ridiculous,” a term meant as a compliment. The Sun Devils don’t have an inside source like Nnaji, and that’s going to be trouble for ASU in the final 17 Pac-12 games.

A lot of college basketball teams don’t easily make in-season adjustments; the most difficult variable in basketball is getting high school superstars to share the ball and play as one. On Saturday, the Wildcats aced that test for one of the few times since opening the season.

Miller said he “worried” about his team being receptive to a new way of basketball, but he surely saw it coming together in the extended practice time since his club’s face-plant against St. John’s.

“It was a good lesson for our team — that we have to play the right way,” he said. “Winning is incredibly hard. To our team’s credit, we’ve taken these 14 days between games and worked hard, gotten better. We’ve had a great attitude.”

Freshman Josh Green seemed to find a new motor against the Sun Devils. He was in the go-go-go mode, not as a wreckless freshman but as a triggerman to the UA’s up-tempo pace. Green only attempted nine shots and scored 12 points, but he had two steals, three blocks and was a problem for the Sun Devils, start to finish.

In the first 13 games, Green was, as many freshmen, a bit inconsistent. The extended post-Christmas practice sessions seem to have made him more sure of himself. He was as good as anybody on the floor Saturday, except maybe Nnaji.

Arizona’s unusually long holiday break was a result of two things: One, Miller does not want to play non-conference games over the holidays, preferring to spend that time on prep work for the Pac-12 And, two, the league schedule gave UA a rivalry game in Week 1, which meant only one game and extra time to prepare.

“It’s a long break, but I do think we took advantage of it,” Miller said.

Maybe in another season the schedule doesn’t work out that well. Maybe you open the season taking seven new players on the Oregon Trail, playing the Ducks and Beavers without being fully prepared.

But this time it all worked out for Arizona. The Sun Devils were vulnerable and the Wildcats were aching to make up for lost ground and lost pride.

On Saturday, they found themselves.

Freshman Zeke Nnaji leads the way with 17 points and 11 rebounds.

The Wildcats kick off Pac12 play with a 75-47 thrashing of the Sun Devils at McKale Center, Tucson, Ariz.

Lauri Markkanen's 26 points not enough in Chicago's loss to Dallas.

Greg Hansen: Could Arizona-Oregon be top rivalry of the next decade? Few have been better

Now's the time for the Ducks, but the Wildcats are coming off another dominant decade.

Arizona guard Josh Green (0) has a big dunk to end a Wildcat fast break against Arizona State in their Pac12 opener at McKale Center, January 4, 2020.

Arizona center Christian Koloko (35) gets a hand in the mouth from Arizona State forward Romello White (23) as he fights his way to the bucket in the second half of their Pac12 opener at McKale Center, January 4, 2020.

Arizona State head coach Bobby Hurley believes the Wildcats traveled one of their second half scores in their Pac12 opener against Arizona at McKale Center, January 4, 2020.