The NCAA declared freshmen eligible in 1972, and by 1976 Arizona was starting a true freshman quarterback. Talk about a rush job. Eight months removed from leading Amphitheater High School to the state championship, Jim Krohn became his hometown’s quarterback.

The genie was out of the bottle, although starting a freshman quarterback at Arizona hasn’t been a genie at all. It has often been a goblin.

The truth? All seven started because of (a) injuries or (b) desperation or (c) both.

Arizona has gone 26-50-3 in the seasons it started a true freshman QB. If you can correctly name Krohn’s six freshman QB successors, I will do my best to get you a ticket to the UA’s Rose Bowl debut in 2043 or maybe 2062.

I bring this to your attention because true freshman QB Will Plummer looks to be Arizona’s starter Saturday night against Colorado.

•Kris Heavner, 2003, a debut loser to TCU, after which coach John Mackovic was fired

Can any school match this type of desperation? Kansas, maybe? Rutgers? Duke?

When Plummer walked onto the field at a moment’s notice last week, he had no time to warm up and no time to get nervous. Maybe that was a good thing.

Only Krohn and Veal, both starters in the third games of their seasons, were rushed into the UA lineup so soon. But Veal and Krohn both had a full week of practice knowing — or suspecting — they would start.

To be fair, UCLA’s defensive coaches must have been equally perplexed when Plummer took the field last week.

“Who is No. 15? What does he do well? Is he a shotgun QB or a scrambler? We prepared a game plan built around Rhett Rodriguez being the emergency QB. Where did this kid come from?”

To his credit, Plummer did not play like a freshman, or even a redshirt freshman. He produced and handled himself like a guy who can be a winner in Power 5 conference football over the next four years.

But the book on Will Plummer, Gilbert High School’s Class of 2020, is a thick mystery that’ll take months to read.

Will he leave the pocket prematurely when under pressure? Or does he have the willingness to stand tall and tough? Are his mechanics sound? Is he reckless? Can he hit a tight window? Does he have the patience to let his receivers’ routes develop?

Does he know the game plan — the full system — and does he have intangibles that few UA freshmen were able to exhibit?

Indeed, there are so many complicated variables to being a successful quarterback that Arizona fans could write a book about why freshmen — redshirt freshmen as well as true freshmen — such as Richard Kovalcheck, Nic Costa, Brandon Dawkins and Ryan O’Hara ended up benched, transferring.

As full-time, first-time starters, the most accomplished Arizona QBs of the last 20 years were older, such as junior-college transfer B.J Denker in 2012, Michigan State transfer Nick Foles from 2009-11, and fifth-year senior Matt Scott in 2012.

Only Anu Solomon, who was surrounded by the most talented Arizona starting lineup since 1999 — including All-American linebacker Scooby Wright, future NFL defensive players Reggie Gilbert and Will Parks, standout kickers Drew Riggleman and Casey Skowron, 1,000-yard rusher Nick Wilson, steady offensive linemen Steven Gurrola, Mickey Baucus and productive receivers Cayleb Jones, Nate Phillips and Samajie Grant — was part of a winning season as a freshman QB. And that comes with an asterisk: Solomon was a redshirt freshman. So was Ortege Jenkins, who in 1997 started the majority of UA’s games in a winning season.

Maybe we shouldn’t tell Plummer what he’s getting into. Or maybe Gunnell, who is basically a freshman in terms of experience, will return this week and use his “abundance” of game time — he has started five college games — to salvage a game or two from what to this point has been a bumpy ride.

Colorado will arrive at Arizona Stadium with an undefeated QB, the 3-0 Sam Noyer, but that’s a bit deceptive. Noyer is the opposite of Arizona’s young QBs: a bench-sitting fifth-year senior who was turned into a defensive back a year ago.

So how about it: Noyer vs. Plummer on Saturday?

In a season overflowing with unusual and unexpected developments, Noyer vs. Plummer would be near the top of the list.

Jon Gold: This Pac-12 season, focus on the fleeting beauty of hoops — and let everything else go

Save your ill will for the pandemic that put us in this position — and for Larry Scott. Instead, focus on the fleeting beauty this season will have to offer.

The veteran UofA center blamed his group – but mostly himself – for the Wildcats’ offensive inconsistencies.

Armando Rios, who died this week, rose from an All-Southern Arizona football player to a confidant of Tucson's power brokers.

UA football lost one of its defensive line commits, as the early signing period approaches. 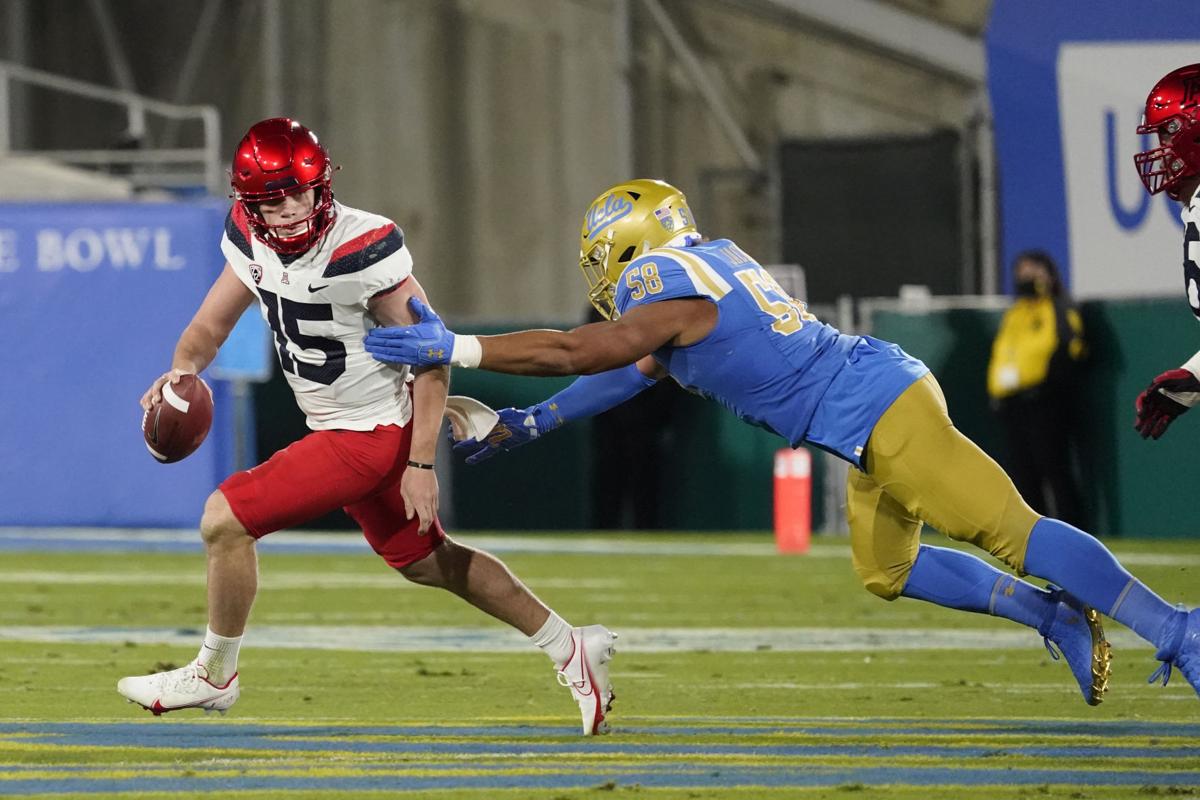 Arizona quarterback Will Plummer, left, is chased by UCLA defensive lineman Datona Jackson during the first half of last weekend’s loss to UCLA. Plummer replaced the injured Grant Gunnell on the game’s second play, and completed 17 of 35 passes for 151 yards. 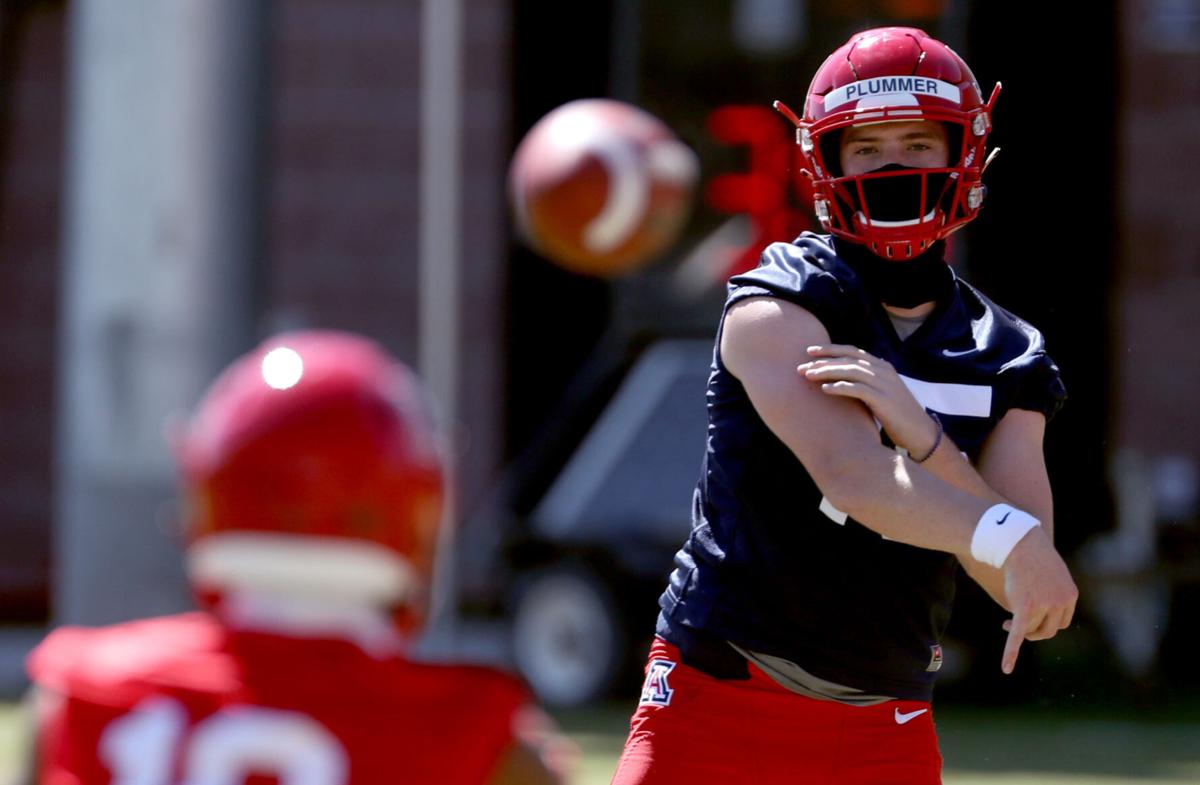 Gilbert High School’s Will Plummer picked Arizona over offers from Oklahoma State, Colorado and others. Saturday, he could make his first career start.