Bill Bresnahan practices his putting with other golfers while waiting to tee off at Dell Urich Course on Monday. Golf courses are thriving in recent weeks. 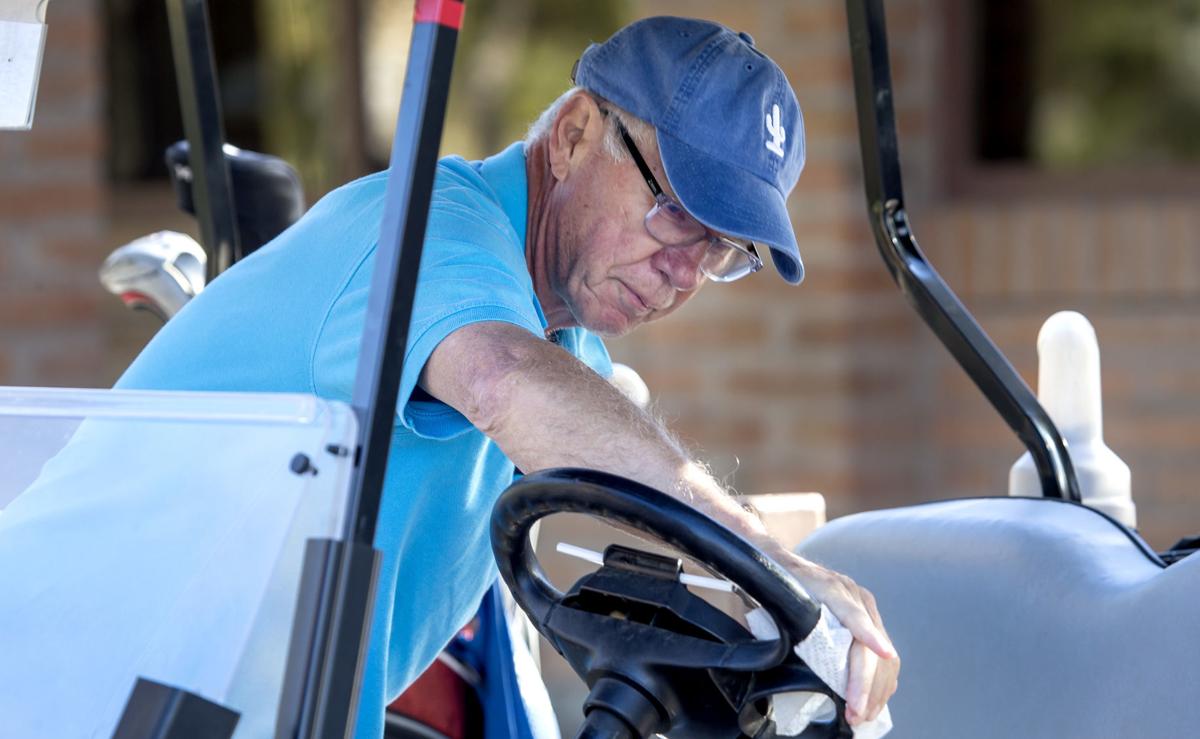 Phil Lavoi wipes down the steering wheel of a golf cart at Randolph Golf Course on Monday. Local courses are taking great precautions to make sure golfers get a safe experience. Del Lago Golf Club shuts down its tee times for 70 minutes during the day to re-sanitize its carts. 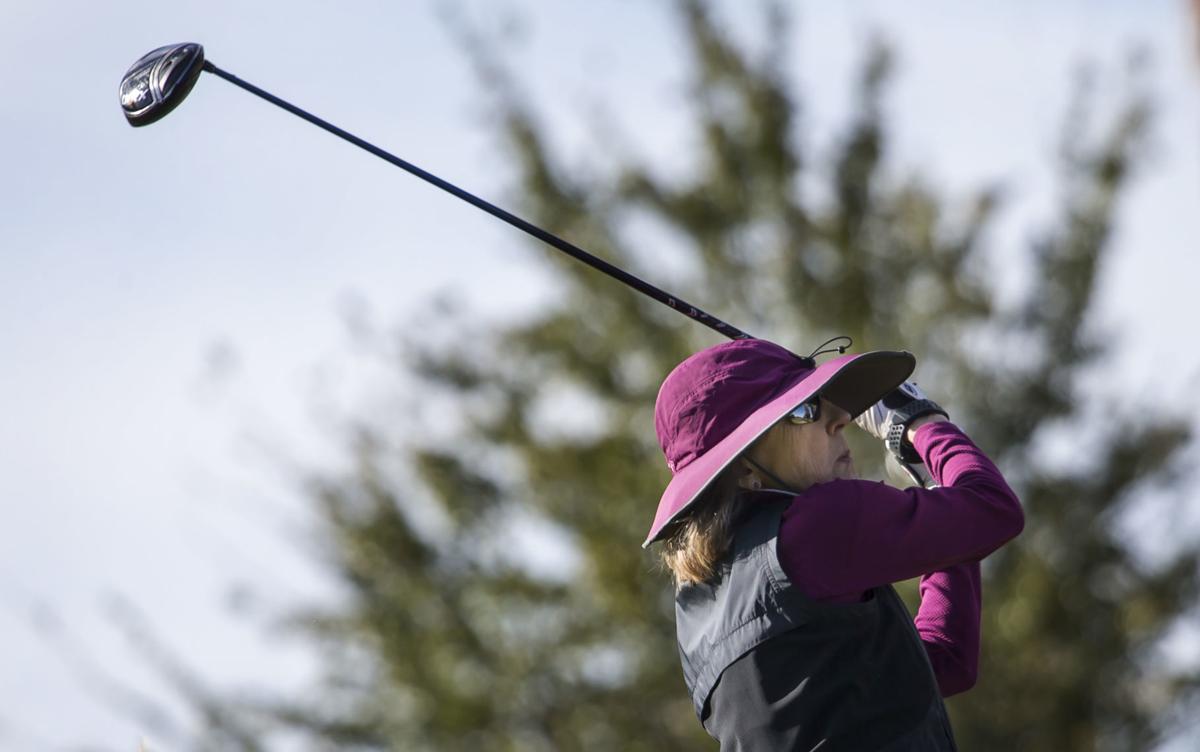 Lorraine St. Germain tees off at Randolph Course. The urged “social distancing” seems to make golf the perfect sport right now. Only two of Southern Arizona’s 42 golf courses have closed due to the coronavirus. 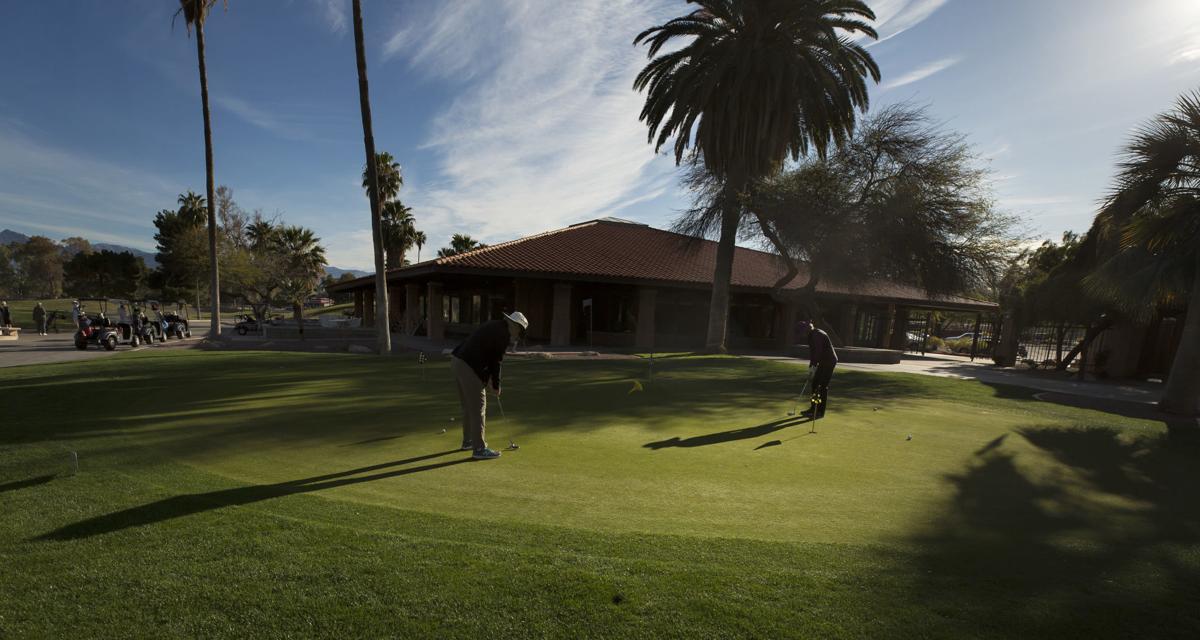 Jane Paul, left, and Lorraine St. Germain practice putting while waiting for their turn to tee off at Randolph Golf Course on Monday morning.

At 6:30 a.m. Sunday, a line of golfers spaced about four feet apart stretched out the propped-open front door of the Randolph Golf Complex. The day’s tee sheets were almost full — 453 total golfers — at Randolph North and Dell Urich courses.

At 11 a.m., the large parking lot adjacent to Alvernon Way was as close to capacity as it gets in the high season of Tucson golf. It looked like something out of the 1990s, when the Randolph Golf Complex was ranked as the second busiest in the United States.

It has been similar across Southern Arizona, from low-key Silverbell Golf Course to high-brow Arizona National.

Last Monday and Tuesday, the Randolph complex drew more than 400 golfers each day — weekend-sized numbers — on what are generally the two slowest business days of the golf week.

Virtually all sports have been shut down by COVID-19. What’s left? Golf and fishing.

“We have a responsibility to do what’s right for the greater good,” said James Mathews, director of Academic Support for the Colorado-based Aspen University, and a regular in the Tucson’s Sunday morning Sunrise Golf Group. “Am I being part of the problem instead of part of the solution? I say no.

“Golf is different than many other activities. We are outside, at least six feet apart from one another and there is no sharing of equipment. So I choose to continue to play golf. If the health experts deem that it is in our collective best interest to stop all activity and go into a lockdown mode, then I will certainly abide by their decision.”

So far, golf has not been a good walk spoiled.

Rich Mueller, vice-president and managing partner of Crooked Tree, shut down the Pima County municipal course last week even though it was experiencing a period of robust financial success.

“It was a really tough decision to close,” he said. “We’ve been really busy and the (driving) range is packed; we’ve been having 200-plus rounds a day. I’m sure I’ll be criticized but I’m good with my decision.”

Many of the 40 courses that remain open have modified operations to avoid health risks.

The Views Golf Club in Oro Valley, one of the busiest courses in Pima County, closed its pro shop. Those who wish to play The Views must pay online or transmit credit card data over the phone. It no longer sells range balls by the bucket for use on the driving range.

It prohibits shotgun starts, which are profitable, large-gathering groups usually numbering in excess of 100.

At Forty-Niner Country Club, general manager Wendy Cross closed the fitness center and eliminated in-room dining at the Rincon Mountain Grill. She limited gatherings on the patio to groups of eight or less.

The Del Lago Golf Club in Vail no longer permits two people to share a golf cart. Instead, it shuts down tee times from 11:50 a.m. to 1 p.m., to re-sanitize its fleet of about 70 golf carts. Business resumes at 1 p.m.

Change has affected more than golf courses; Van’s Golf Shops, which has two locations in Tucson, is closed for two weeks at which time it will reconsider its options. The PGA Superstore on Oracle Road cut its hours and encourages customers to order golf paraphernalia online and arrange to have a “caddie” deliver purchases to vehicles in the parking lot.

The game and its routine has shifted, sometimes subtly.

There are no more “bro hugs” on the golf course. No high-fiving or knuckle-taps after good shots. Some courses, such as Del Lago, have raised the cup an inch above the putting surface so that a golfer doesn’t reach into the cup to retrieve his ball.

Gimmes? It’s true. Even the staid, starched-collar world of the USGA has changed to allow gimmes in its handicap system.

During the four hours it took about 300 golfers to play 18 holes at the Randolph Golf Complex on Monday, hundreds — perhaps even a thousand — Tucsonans exercised on the Reid Park trail that surrounds the two golf courses.

Monday morning, I drove the loop around the exercise path — Alvernon Way to 22nd Street, Randolph Way to Broadway Boulevard and back to Alvernon — and counted 108 walkers, joggers and skateboard riders. Those 108 were surely replaced by another 108 an hour or two later, and another 108 at noon and again in mid-afternoon.

Are walking and jogging any less safe than playing golf? Nobody truly knows.

“I hated to close our course,” said Crooked Tree’s Mueller, “but I’d feel horrible if by keeping it open it contributed to the spread of the virus.”

Golf in Tucson is now a day-to-day existence. Early Monday it was about 70 degrees, sunny and the large putting green at Dell Urich Golf Course was being used by about six to eight golfers at a time, waiting their turn at the No. 1 tee.

“I’m enjoying this while I can,” said Gil Bybee, a retired schoolteacher who said he continues to play golf twice a week. “You never know when it might be taken away, too.”

The IOC said that it will make a final decision on the Tokyo Olympics in late May. But UA coaching legend Frank Busch says there's no reason to wait that long, especially if the games can be held in 2021.

This was to be the start of Arizona’s push toward a third consecutive berth in NCAA golf’s version of the Final Four. Instead, coach Laura Ianello has sent her players to their homes in Asia and Europe, unsure who will return in the fall.

Cost-containment, which has largely been ignored by Power 5 Conference schools for the last 25 years, is likely coming back.

Bill Bresnahan practices his putting with other golfers while waiting to tee off at Dell Urich Course on Monday. Golf courses are thriving in recent weeks.

Phil Lavoi wipes down the steering wheel of a golf cart at Randolph Golf Course on Monday. Local courses are taking great precautions to make sure golfers get a safe experience. Del Lago Golf Club shuts down its tee times for 70 minutes during the day to re-sanitize its carts.

Lorraine St. Germain tees off at Randolph Course. The urged “social distancing” seems to make golf the perfect sport right now. Only two of Southern Arizona’s 42 golf courses have closed due to the coronavirus.

Jane Paul, left, and Lorraine St. Germain practice putting while waiting for their turn to tee off at Randolph Golf Course on Monday morning.