Alone in the dark, I stood outside the Lowell-Stevens Football Facility and watched as 100 football players and coaches quietly walked across National Championship Drive early Tuesday evening.

The stillness of the UA campus and especially the football practice had an eerie nature to it.

Without the oversized “BEAR DOWN” logo towering over the Dick Tomey Practice Fields — without the block “A” on their football helmets — there were so many unfamiliar names and faces that it could’ve passed for the training camp of, say, Washington State or New Mexico State.

There were no instantly recognizable figures that have so often stood out at Arizona’s training camps. No hulking Rob Gronkowski. No fiercely determined Tedy Bruschi. No one wearing jersey No. 89 the way Ricky Hunley did, or no No. 25, Ka’Deem Carey, who could be identified from 100 yards away.

Part of it can be traced to the interruption of spring practice to make way for the coronavirus pandemic. There was no true introduction of Arizona’s 2020 football team, either to the fans or to four new coaches. Part of it is that Arizona lost seven consecutive games to end the 2019 season, the longest losing streak to end a season in school history. And part of it is that the Wildcats of 2020 are without anyone who qualifies as the face of the franchise.

The most well-known player among the 100 who worked out Tuesday evening? Probably sophomore quarterback Grant Gunnell, who has three career starts.

Even coach Kevin Sumlin was difficult to pick out of the crowd. He looks as if he has lost 20 pounds, limping on a bad left knee, blending into a mix of first-year defensive coaches so unlike past UA training camps when a Duane Akina or a Homer Smith or a Sonny Dykes had as high a profile as an All-Pac-12 tackle.

Sumlin does not have a powerful bearing or presence. As I watched the first 20 minutes of practice, I did not hear his voice — even though there was barely a sound outside of the muted traffic on Campbell Avenue.

In 15 days, Arizona will open the season at Utah, the most physical and resourceful football program in the Pac-12. That is a short time to establish a voice.

After Tuesday’s practice, the UA made new outside linebackers coach Andy Buh available for a Zoom media conference. Buh is one of four new defensive coaches, a staff totally rebuilt after the in-season firing of Marcel Yates and his partners.

Initially, I suspected hiring Buh, defensive coordinator Paul Rhoads and defensive line coach Stan Eggen was a hopeless exercise, part of the inevitable delay leading to another coaching search and another rebuilding process.

But after listening to Buh I was struck that hiring him, Rhoads and Eggen might’ve been a wiser course than persuading a younger and eager rising star to introduce his flashy “system” to an undermanned defensive roster.

I doubt there are three crisis managers in college football more familiar with college football’s version of “Mission Impossible” — the task awaiting Arizona’s defense in 2020 — than Buh, Rhoads and Eggen.

Since 2011, Buh spent just one season on coaching staffs at Kentucky, Rutgers, Cal and Wisconsin. That is surely an NCAA record. It is football’s less glamorous version of college basketball’s one-and-done. Another year, 2014, he didn’t coach at all, collecting a payout after being fired at Cal.

Rhoads coached on four staffs in which the head coach was fired, and four more in which it was Year 1 for a new staff.

Eggen has been on staffs that were fired at Nevada, Louisiana Tech, New Mexico and Iowa State, and was part of first-year staffs at TCU, Alabama, Texas A&M, Iowa State and Louisiana Tech.

Do not expect them to be in the self-pity mode when they fully evaluate Arizona’s defensive personnel. They’ve been there before and have often been successful rebuilders.

The thing is: You never know how much time you’re going to be given to reboot a defense like the one at Arizona that has allowed more total yards and more total points than any defense in the league since the Pac-12 expanded in 2012.

Buh admitted Arizona does “not have enough of these bodies” to easily transition to Rhoads’ 3-4 defensive scheme. “We’ve all had to adjust,” he said.

He did not choose to alibi. The club’s two most proven defensive players — linebackers Colin Schooler to Texas Tech and Tony Fields II to West Virginia — transferred over the summer. Buh said, simply, “I don’t blame them for that.”

Junior Jalen Harris, who gained 55 pounds since his freshman season, is one of the few Wildcats who passes the eye test. He will play outside linebacker, a new position. This is neither a quick nor a simple transition.

Said Buh: “He just needs the reps and needs to play more football.”

Patience? What’s that? Not when you’re on an 0-7 losing streak, looking at a possible 0-7 season.

In many ways, the time is now for Arizona football, ready or not.

‘Unique’ recruiting cycle has been bountiful for Arizona, but closing could be tricky

Wildcats assistant Theron Aych says restrictions have reinforced the importance of building relationships; thus far, the UA hasn’t had a rash of decommitments like ‘some school up north.’

Pusch Ridge Christian and Salpointe Catholic will both play Friday night, one week before some public schools in Tucson are expected to open their seasons.

FC Tucson lost only one of its final eight matches, winning four of them and earning a draw in the other three. The Men in Black were one of only three clubs in their league to have one loss or fewer in the second half of the season.

The Star's longtime columnist takes a look at the players, coaches and storylines to watch during a shortened Pac-12 season, and picks how the conference standings will play out. For more from the Star's annual college football preview section, visit Tucson.com/wildcats. 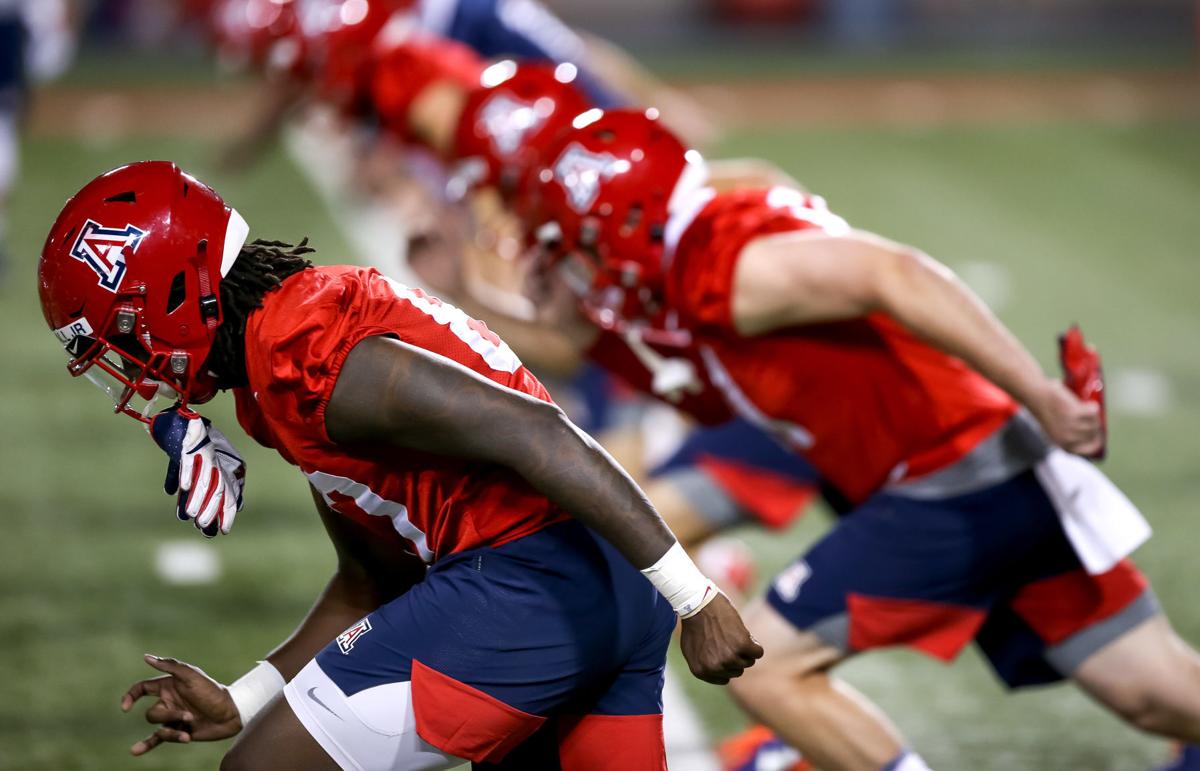 Junior tight end Stacey Marshall (87) runs a warmup drill with fellow teammates during a practice last week. The Wildcats open their 2020 season on Nov. 7 without an instantly identifiable superstar on either side of the ball.

The Arizona Wildcats have lost seven consecutive games dating back to last season, and face a tough start to a shortened 2020 season. 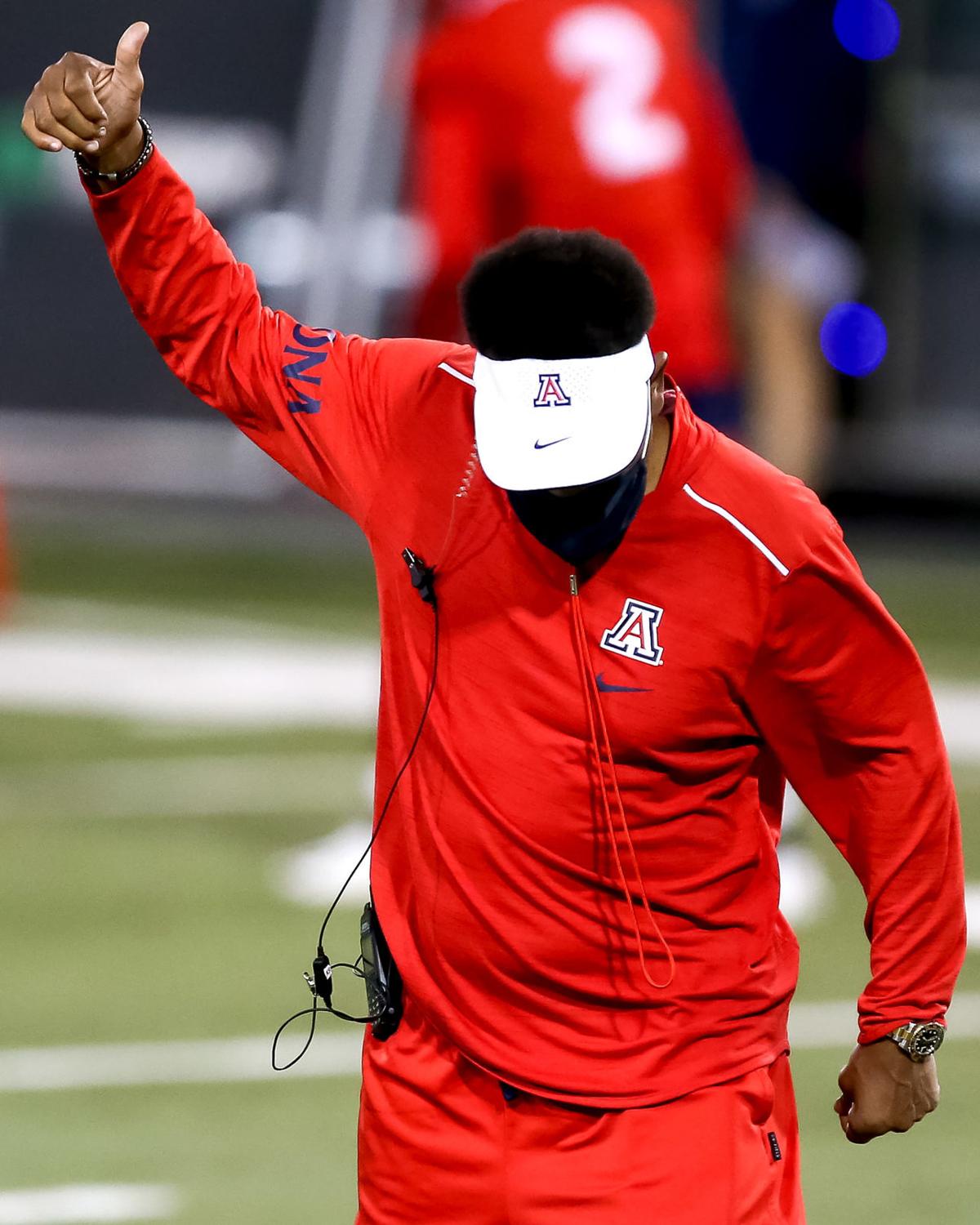 Head coach Kevin Sumlin gives a thumbs up before a play during football practice at Arizona Stadium, 1 N. National Championship Dr., in Tucson, Ariz., on October 16, 2020.