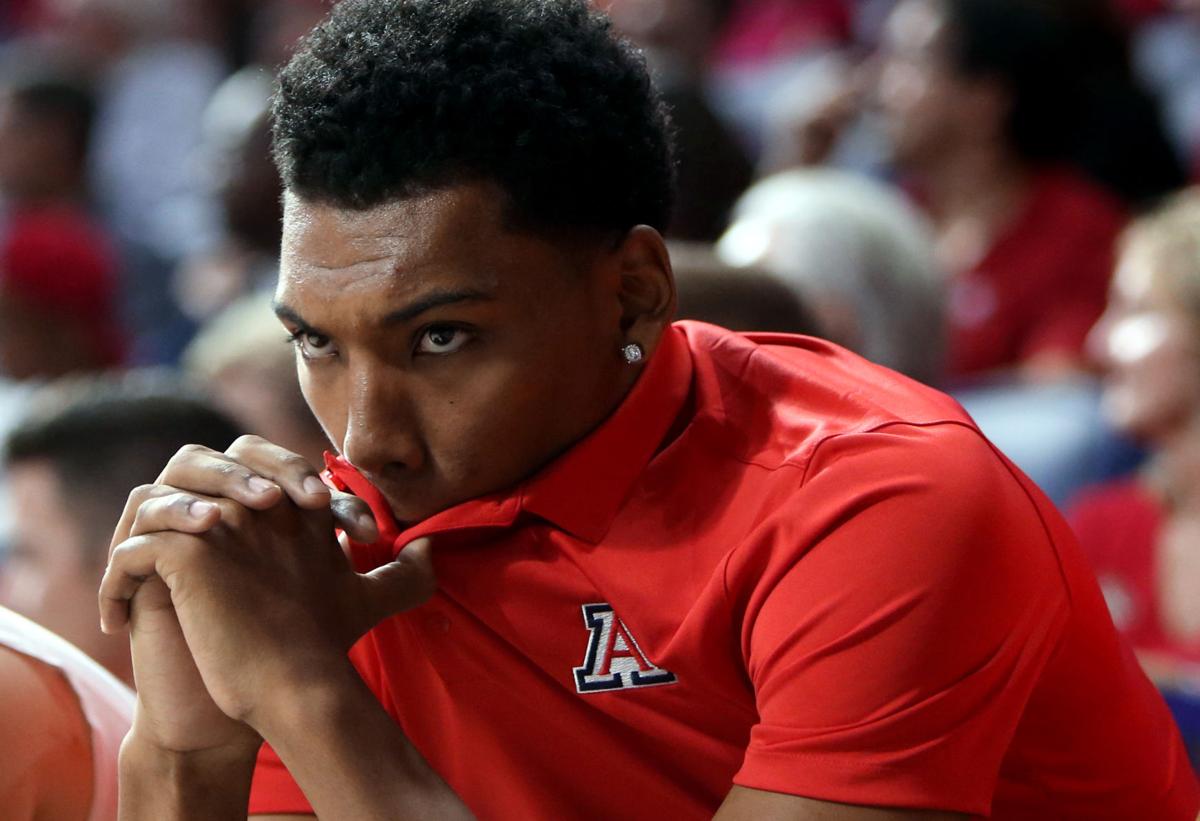 Arizona's Allonzo Trier watches in street clothes from the bench as the Wildcats easily handle College of Idaho in the second half of their game at McKale Center, Tuesday, Nov. 1, 2016, Tucson, Ariz. Kelly Presnell / Arizona Daily Star 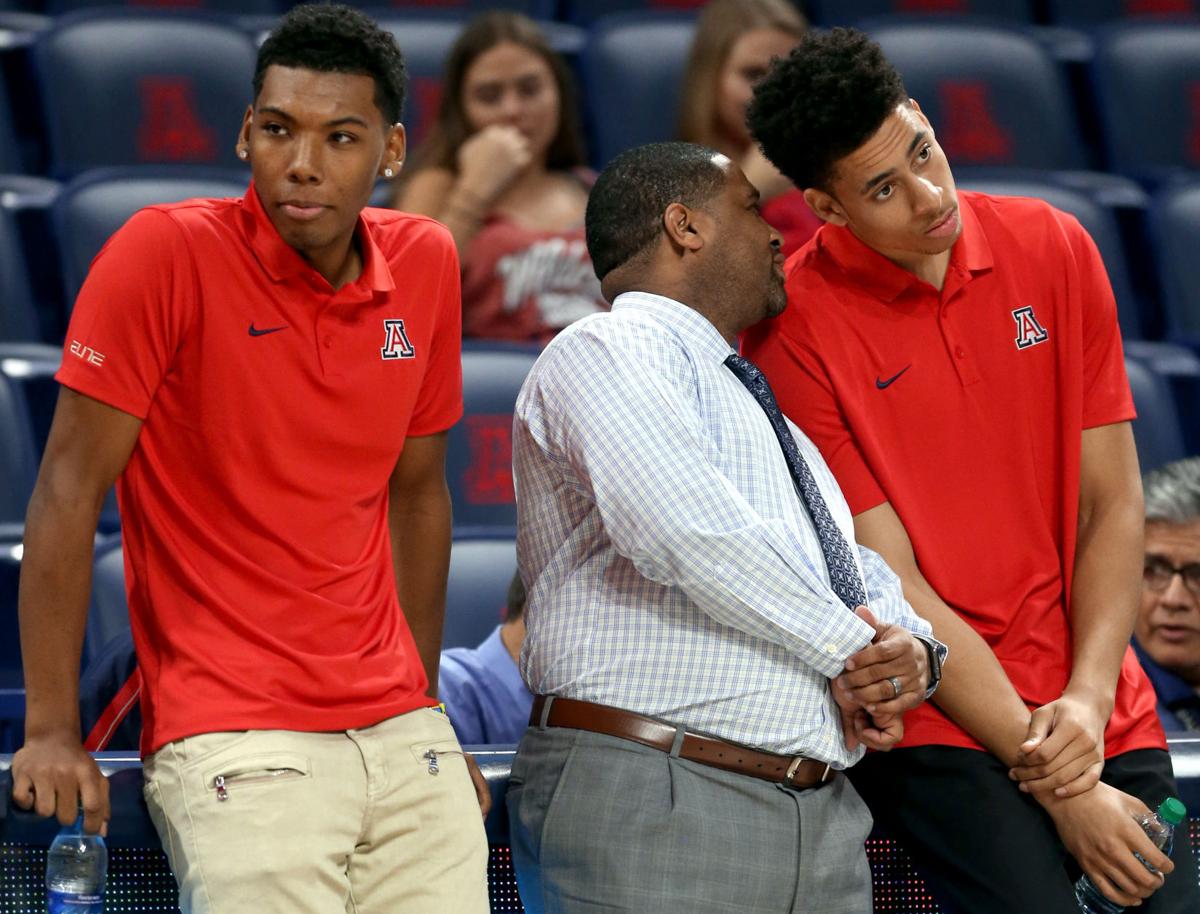 Allonzo Trier, left, and Chance Comanche with “Book” Richardson before a 2016 game. Richardson was relieved of all duties Tuesday by the UA.

If you are aching to know why Allonzo Trier isn’t in uniform, here’s the best available answer:

The UA athletic department no longer lists birthdates of players in its media guides. It no longer includes a brief bio about a player’s parents and their occupations.

That’s now considered sensitive and potentially compromising information, and so schools like Arizona play it safe.

Why isn’t Trier allowed to play?

The UA’s only answer has been “no comment,” and that’s because multiple agencies protect students’ privacy — including their birthdates — and those agencies are known by the initials FERPA, HIPAA, PPRA and HUSHUP.

OK, I’m kidding about HUSHUP, but the others are legit agencies that make it mostly illegal for someone like Arizona basketball coach Sean Miller to divulge what keeps Trier on the bench.

It’s a good thing, too, because what if Miller — or some other coach at another college — said that Joe Schmoe isn’t playing because he violated a rule.

That allegation would follow Joe Schmoe for years, even if he appealed the ruling and won. You can’t do that. If nothing else, it’s not fair.

Miller’s program motto is “honor the process,” and it’s ironic that the legal process has become such a conspicuous part of Arizona basketball the last 11 months, starting with ex-Wildcat Elliott Pitts and rolling over to Trier.

As Arizona rolled to an 86-35 victory over College of Idaho in Tuesday’s season-opening exhibition game, Trier sat in a position usually occupied by walk-ons, deep on the UA bench, past the baseline, almost in basketball oblivion.

He sat next to sophomore center Chance Comanche, also in civilian clothes.

The UA released a statement about Comanche’s availability on Tuesday, saying he is indefinitely suspended “due to his own lack of academic responsibility.”

So why describe Comanche’s situation and not Trier’s? Although no one’s willing to talk on the record, it’s probably because Comanche’s classroom work has been determined to be lacking, while there has been no final determination on Trier’s situation.

The most important thing is to protect Trier’s rights.

Arizona’s basketball players are more visible in this community than the mayor and the chief of police, and even a fringe player like Pitts became the hottest topic of conversation in Tucson last winter.

This isn’t new at McKale Center.

In November 2000, a season Arizona would reach the national championship game, two key Wildcats were sitting next to Lute Olson in their civvies. It was as intensely observable, and quiet, as it is now with Trier.

Senior center Loren Woods was suspended for six season-opening games by the NCAA. His error? Accepting illegal benefits from his old high school coach. How much of an error was it? The NCAA said the benefits were between $300 and $499.

Arizona appealed, asking for a three-game sentence. The NCAA insisted on six. Only after the sentence was announced did Olson and the school comment publicly. The Tucson basketball community could finally breathe again.

At the same time, junior forward Richard Jefferson was suspended two games for accepting a plane ticket and an NBA Finals ticket from Bill Walton, the father of UA forward Luke Walton.

Jefferson faced a potentially longer suspension but was reinstated when Arizona agreed to have Jefferson repay the estimated $281 in benefits to a charity.

Arizona insisted on a “no comment” policy until Jefferson had gone through the NCAA’s legal process. Trier is getting the same treatment that Woods and Jefferson did 15 years ago.

Some schools aren’t as strict with interpretations.

Last spring, Florida football coach Jim McElwain suspended two of the Gators’ leading players and, anticipating the public’s thirst for information, disarmed the entire situation by saying: “We’re without a couple of guys who haven’t been with our team since January. They’re still doing some schoolwork and that kind of stuff. You won’t see those guys out there at practice. This will be the last that we talk about that.”

End of conversation. The Florida football community moved on.

It’s not that easy in Tucson, where deep-dish worry accompanies all basketball things that don’t flow downstream.

Not that there isn’t enough news to fill your computer screen.

Miller’s rotation has been shot to smithereens before the first official game. Trier and Comanche are out, Ray Smith left the game with a leg injury, and suddenly junior Keanu Pinder, who once seemed like a recruiting afterthought, appears to be the sixth man.

Pinder has to be a powerful piece because, as Miller said 30 minutes after the game, “We don’t have any depth.”

No team, not even Duke, can afford the loss of Trier, Comanche and Smith at any time in any season.

“It’s heartbreaking, it really is,” said Miller, referencing Smith’s injury. “I don’t have any words to couch it and make it better than it really is. It’s awful.”

In a stunning turn of events, the Wildcats have been humbled, and it is only Nov. 2. This is one time “awful” might be an understatement.

Arizona-Idaho postgame: And then there were seven

Find information about Arizona basketball coaches, opponents and results from every game since 1904.

Arizona's Allonzo Trier watches in street clothes from the bench as the Wildcats easily handle College of Idaho in the second half of their game at McKale Center, Tuesday, Nov. 1, 2016, Tucson, Ariz. Kelly Presnell / Arizona Daily Star

Allonzo Trier, left, and Chance Comanche with “Book” Richardson before a 2016 game. Richardson was relieved of all duties Tuesday by the UA.